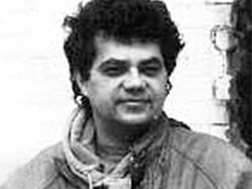 Poet Alpay Ulku was a featured poet in the 2012 Public Poetry Project of the Pennsylvania Center for the Book.

Born in Turkey, Alpay Ulku eventually found his home in the United States and began publishing poetry. His first collection, Meteorology: poems (1999), was selected as a "Notable Debut" by the Academy of American Poets book club. Apart from writing poetry, he has worked as a technical writer and a business analyst. His poem "The Stiller of Atoms," from Ploughshares (2009), was selected for publication by the 2012 Public Poetry Project of the Pennsylvania Center for the Book.

Alpay Ulku has been exposed to a variety of cultures and experiences that have shaped his poetry. Born in Turkey, raised in Canada, and schooled in England, Ulku now calls the United States his home after many years of moving about.

He earned his BA from the Johnston Center for Integrative Studies at the University of Redlands in California and his MFA from the University of Iowa Writers' Workshop. He holds several fellowships including one with the Helen Wurlitzer Foundation and another with the Fine Arts Work Center in Provincetown, Massachusetts. Ulku has received grants from the Iowa Arts Council, the Illinois Arts Council, and others.

His first collection, Meteorology: poems, was published in 1999 while Ulku was living in Pittsburgh, Pennsylvania, and it was selected as a "Notable Debut" by the Academy of American Poets book club. His works also have appeared in various literary journals such as the Black Warrior Review, Gettysburg Review, Agni, Boulevard, Crazyhorse, and many more.

"The Stiller of Atoms," a poem that first appeared in Ploughshares (2009), is from his poetry collection in progress and was selected for publication by the Public Poetry Project of the Pennsylvania Center for the Book in 2012.

His poem, "Three Rivers," first published by The Gettysburg Review, was selected by senior Slate editor Michael Agger for the Best Valentine's Day Poems feature in 2011. Agger says of the poem, "The first line stopped me ... [and] what follows are snapshots of the small, shared familiars that twine two people together."

Ulku's work has also been included in the anthologies American Poetry: The Next Generation (2000) and City of the Big Shoulders: An Anthology of Chicago Poetry (2012).

At the time of this writing, Alpay Ulku lives in Chicago with his wife, the writer Anne-Marie Gallagher, and their two cats. He works as a technical writer and a business analyst, while continuing to write.