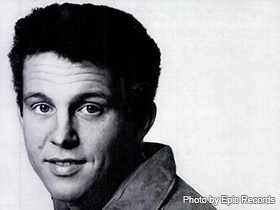 Singer Bobby Vinton had major hits with "Blue Velvet" and "Melody of Love."

Stanley Vinton was born in April of 1941 in Pennsylvania. He was influenced to play music at a young age by his father. As Stanley became a teen and formed his own band, he decided to change his name to Bobby Vinton. Bobby Vinton got a chance to appear on a TV show for talent scouts and soon was offered a contract with Epic Records. Bobby Vinton is well known for his romantic music and his angelic voice but he also became involved in movies with John Wayne and hosted his own show for some years. Vinton wrote an autobiography and established the Blue Velvet Theatre.

Stanley Robert Vinton Jr. was born on April 16, 1941 in Canonsburg, Pennsylvania. His father and mother were Stanley Vinton and Dorothy Studinsky. His father was a local band leader; it is not hard to see how Stanley Robert Vinton Jr. became interested in music at a very young age. At only five years of age Vinton Jr. was already singing in his father's band and by ten he was playing the clarinet with the band. By the time Vinton was 16 years old in high school, he was playing the trumpet as well and eventually formed his own band.

After starting his band, he decided to change his name to Bobby Vinton and felt he needed to make a difference between him and his father. Vinton focused on band leading and would play in school dances and other similar events around the area. Once at Duquesne University, Vinton decided to study and graduate in musical composition. By the time Vinton graduated from college he knew how to play all instruments in the band.

He served in the military for a short time in the late 1950s and played the trumpet while in the military. When he was in the military in Japan, he got the idea for his song "Mr. Lonely." Vinton got married on December 17, 1962, to Dolly Dobbin and later had five children with her: three daughters and two sons.

Vinton's career started after he left the military. He traveled around the country with his band and played for singers who inspired him to get involved in the music business. Dick Lawrence also made Vinton's first demo for CBS Records who later offered him a contract in 1960 with Epic Records. At first Vinton was not too successful and Epic was about to end their business with him, until Vinton decided to sing his next two songs he had available. That was when his first single came out called "Roses are Red" in 1962 followed by "Blue Velvet" and it became a number one hit. After this single his hits came one after the other, year after year. Billboard Magazine called him "the all-time most successful love singer of the Rock Era." Many other newspapers and reviews said Vinton was even bigger than Elvis Presley and Frank Sinatra. One of his last songs recorded was "Melody of Love." This was a song written in Polish. Vinton mentions that his mother requested a song in Polish after listening to his show and not hearing any Polish songs. Vinton says "So, to answer my mother's request, I wrote this 'Melody of Love.' I had no idea that that would be a number one record."

In 1971 and 1973, he was in two John Wayne movies, Big Jake and The Train Robbers. After 13 years with Epic records, Vinton was thought to be a fading singer. However, Vinton proved Epic records wrong. Vinton agreed to a contract with ABC records and released a hit album in 1974.

From 1975 to 1978 Vinton hosted his own TV show called The Bobby Vinton Show. Bobby Vinton decided to write an autobiography that was published in 1978 entitled The Polish Prince. The autobiography was written by Robert E. Burger and himself. One of his greatest achievements was creating and opening his own theatre in 1993. The Bobby Vinton Blue Velvet Theatre in Branson, Missouri is a European-style blue theatre. In the later years, Vinton got his own bronze star on the Hollywood Walk of Fame at 6919 Hollywood Boulevard.

In his latter years, Vinton had performed in his Blue Velvet theatre until selling it and performing periodically across the country. He has also ventured into the realm of infomercials, selling the "Lifetime of Romance" music collection. Vinton currently resides in Englewood, Florida with his family.