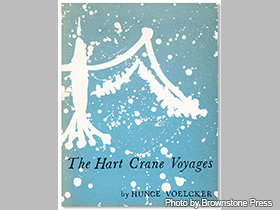 Danville native, Voelcker wrotepoems thathave been anthems for many in the homosexual community. His works include The Hart Crane Voyages (1967).

Poet Hunce Voelcker was born in Danville in 1940. He left Montour County for education at Villanova and in New York. Later in his career he moved to San Francisco where he was part of the Jack Spicer Circle of poets. The book for which he is best known is a biography of the poet Hart Crane. At his passing, he made a bequest to the PEN American Center to honor fellow poets.

Poet Hunce Voelcker was born on June 28, 1940 in Danville, Pennsylvania. He was the son of Henry and Mary Voelcker. Following high school, he matriculated at Villanova University, earning his BA there in 1962. He then moved to New York to take graduate classes at the City College of the City University of New York from 1963 to 1964. Voelcker then moved west to San Francisco and became associated with the openly homosexual writers group connected to the poet Jack Spicer.

Voelcker's writing would include a number of chapbooks of poetry, a novel Logan (1969), and his best known piece, The Hart Crane Voyages (1967). In terms of general content, The Hart Crane Voyages is a volume of criticism about the poet Hart Crane's collection Voyages. Of this part critical work/part stream of consciousness reaction to Voyages, Samuel Loveman writes that "Voelcker's magnificent prose and his equally magnificent analysis of Crane's "Voyages," deserve the highest placement in modern creative literature."

A collection of the late Voelcker's papers resides at the GLBT Historical Society in San Francisco. The PEN American Center each year offers bestows the Voelcker Award for Poetry to poets in "whom the exceptional promise seen in earlier work has been fulfilled, and who continues to mature with each successive volume of poetry." Among the past recipients of the $5000 stipend (that Voelcker endowed) are C.K. Williams and Robert Pinsky.