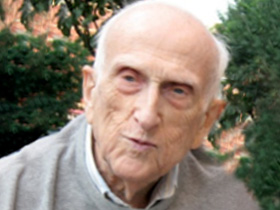 Bernard Waber was born September 27, 1924, in Philadelphia, Pennsylvania. He began his college career at the University of Pennsylvania where he studied finance. World War II interrupted his studies, and Waber served in the United States Army for three years. After serving in the military, he decided to study at the Philadelphia College of Art. Waber discovered he had a strong interest in children's books, which was his primary focus since 1961. He wrote over 20 children's books and captured the imaginations countless kids, especially with his Lyle the Crocodile book series. Waber once said that his greatest contribution was "nourishing children's appetites for reading." Waber passed away at his Long Island home on May 16, 2013. He was 91.

Bernard Waber was born September 27, 1924, in Philadelphia, Pennsylvania, to Henry and Pauline Waber. Due to business failures and unsteady jobs, the artistic family moved frequently.

Waber had begun earning his finance degree at the University of Pennsylvania when he left school to serve his country in World War II. From 1942 to 1945, Waber served the United States Army as a staff sergeant. After the war, he returned to his studies, but transferred to the Philadelphia College of Art, where he discovered his true calling and eventually graduated from in 1951.

Upon graduation, Waber launched his career as a commercial artist and soon became interested in children's books, which he began to illustrate and write. At age 28, he married Ethel Bernstein, moved to New York City, and later had three children. When his children were young, Waber worked in the art department of Cond?? Nast Publications and wrote his books at night and on the weekends. In addition to writing, illustrating, and raising his children, Waber also enjoyed playing the piano, cooking, and taking in Broadway theatre.

Waber debuted as an author in 1962 with The House on East 88th Street, which introduced readers to the beloved character Lyle the crocodile, first spotted in a bathtub in an Upper East Side brownstone. He wrote numerous books for children centered on the adventures of animals. Books such as Do You See a Mouse? (1996), Evie and MargieI (2004), and A Lion Named Shirley Williamson (1996) have been commended for their ability to capture the imagination and interest of beginner readers. Waber's Lyle series is his most well-known set of children's books. In the books, Lyle is a crocodile that lives in a bath tub. Lyle's character brings joy to everyone he meets, for "everywhere he went, Lyle always made people smile and forget their troubles."

Memorable human characters appear in Waber's work as well. Ira Sleeps Over (1973) tells the story of a young boy who struggles to decide whether he should leave his favorite teddy bear home for a sleepover at his friend's house. His book that followed was the sequel Ira Says Goodbye (1988). Waber often wrote about real-life issues, such friendship issues and moving. Many of his stories were informed by his childhood experiences of moving often and being characterized as the "new kid" in the neighborhood.

Shortly after the attacks of September 11, 2001, Waber wrote the book Courage (2002). Many view this book as one that helps children cope with the events that took place and other similar tragedies. Through various characters, the children in the book are taught how to be brave and what bravery means. Booklist reviewer GraceAnn DeCandido describes it as "a simple book with a complex message." Courage begins: "There are many kinds of courage..." and then goes on to illustrate what this means in everyday lives. From riding a bicycle without training wheels to helping somebody in need, Waber shows children that we can all be heroes.

His warmth, energy, artfulness, elegance, and abiding respect for children were epitomized in his books, Houghton's senior vice president and publisher of books for young readers, Betsy Groban, said of Bernard Waber. According to the publisher, his 33 books have sold 1.75 million copies.

Bernard Waber credited his family for his achievements, since he not only came from a long line of artistic abilities, but also a family of love, support, and encouragement. His final book, Lyle Walks the Dog (2010), was a collaboration with his daughter, Paulis.

Waber passed away after a long illness on May 16, 2013, in his Long Island home. He was 91 years old and is survived by his brother, three children, and four grandchildren. "There is a freedom about writing that appeals to me," Waber wrote in a biographical essay. "You can do it almost anywhere — and I have."