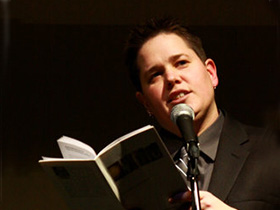 Author of Choke (2004) and Love Poem to Androgyny (2006), poet Stacey Waite teaches at the University of Pittsburgh.

Stacey Waite is well known for the 2004 chapbook Choke, winner of the Frank O'Hara Award for Poetry. Waite was also a featured in the 2006 Public Poetry Project of the Pennsylvania Center for the Book.

Born January 9, 1977, in Smithtown, New York, Stacey Waite had a desire to move people through poetry at an early age. Waite names Ralph Angel agreat influence, noting that his poems possess an "ache and long for love; body and earth."

"I first read [him] as an undergraduate, and I remember taking his book, Neither World, around with me for months, reading poems to friends and lovers," Waite told the Pennsylvania Center for the Book's Alan Jalowitz. "It's easy to tell if I love certain poets because their poems will be left on answering machines all across the country."

In addition to being published in poetry magazines such as Nimrod, Poet Lore, Bloom, and 5 AM, Waite's first manuscript, the chapbook Choke, was published in 2004. Winner of the Frank O'Hara Award, an honor named for the late member of the New York School, Choke received excellent reviews from Erin Bertram of NewPages.com. Said Bertram, "Despite the collection's opening lines, 'Let me just say, about the lilacs, / I would have to apologize,' Waite's work is anything but apologetic, stuffing 25 pages with sparse and, at times, terrifyingly candid language too subtly subversive not to return to." Author David Groff said of the volume: "In this sequence of fierce, dry-eyed poems, Stacey Waite is 'trying to tell the truth about my body,' writing with unblinking honesty of the urge both to embrace and elude engagement with [Waite's] own body and those other bodies [Waite] desires."

In 2010, Waite published the poetry collection the lake has no saint, Winner of the Snowbound Prize in Poetry. Poet Lynn Emanuel says of the book: In verse paragraphs composed of fragments and fast-moving sentences, Stacey Waite's the lake has no saint propels a reader into a welter of landscapes, family narratives, and meditations on gender and identity. The effect of this marvelous new chapbook is both breathless and sorrowful, which is to say that this is a work of utmost emotional, narrative, and philosophical complexity.

Waite's collection, Butch Geography (2013), continues on Waite's common themes with a coming-of-age slant and further examination of the body, according to Rumpus writer, Julie Marie Wade. "You could call Butch Geography a kunstlerroman, an artist's coming of age and you would be right," Wade explains. "It's one thing, after all, to discover as a ten-year-old catcher on the baseball team that '[t]hey're all watching the girl with no balls.' But there is an important turn in the next line when the speaker tells us, 'I'm watching her, too.'"

"Inside [this book] you will find series of poems within poems, recollections that begin 'On the Occasion of Being Mistaken...' and epistles addressed 'Dear Gender.' ... Stacey Waite is a poet in conversation with anyone who will listen, a poet whose voice is as 'alive, and inevitable' as the body s/he sings, and 'survival,' Waite reminds us, is 'the anthem/ of those places we've always been.'"

Waite's poem, "Dear Gender," included in both Choke (2004) and Butch Geography (2013), was selected for publication by the Public Poetry Project of the Pennsylvania Center for the Book in 2006.

Waite travels the country giving readings, hosting book signings, and participating in panels. Waite returned to the University of Pittsburgh in 2013 to present the talk, "Dancing with Queer Stars: Chaz Bono and the Politics of Gender Mobility" and continues to present on topics such as This Seems Queer: Writing Against Conventions and How (and Why) to Write Queer. Waite also pens and coedits academic texts, such as Teaching Queer: Radical Possibilities for Writing and Knowing (2017) - a text that examines student writing, transcripts of class descriptions, and teaching practices in first-year writing courses to articulate queer theories of literacy and writing instruction, while also considering the embodied actuality of being a queer teacher, according to the University of Pittsburgh Press.

At the time of this writing, Stacey Waite is an Assistant Professor and Chair of the Graduate Program in the Department of English at the University of Nebraska and says in a Teaching Statement that "Writing offers the unique opportunity to explore the assumptions we have accumulated in a lifetime of cultural contact. This exploration not only creates spaces for layered, creative, and intellectual writing, but also requires writers to self-reflexively examine difficulties, to face what is difficult to see—something I think reaches far beyond the scope of writing itself. My students' ideas and contributions are at the center of my own intellectual work and my classroom."