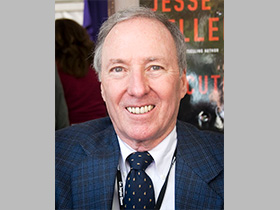 Joseph Wambaugh is known for his police novels and his true crime story, The Onion Field.

Novelist Joseph Wambaugh was born in East Pittsburgh, Pennsylvania in 1937 and moved to Los Angeles, California when he was 14 years old. After a stint in the military, Wambaugh joined the Los Angeles Police Department while taking night classes to earn a Bachelor's Degree in literature. Wambaugh continued working for the LAPD and taking classes toward a Master's degree. In 1971, he published his first novel, The New Centurions, which followed the early careers of three Los Angeles police officers. It was a hit and more books followed. Wambaugh eventually left the LAPD to work full-time as a writer. His latest work, published in 2008, is Hollywood Crows.

Though most of Joseph Wambaugh's writing centers on Los Angeles, California, the award-winning author was born in East Pittsburgh, Pennsylvania. Wambaugh's father was a police chief, and later a steelworker — two fields in which Wambaugh would also work.

After leaving Pennsylvania at the age of 14, Wambaugh's family moved to California. Three years later, in 1954, Wambaugh joined the United States Marine Corps, during which time he attended night school and married. Following his three years in the Marines, Wambaugh worked at a local steel mill while still attending college part-time. Wambaugh considered becoming an English teacher, but decided against it. Instead, he joined the Los Angeles Police Department. At the same time, he continued going to school and earned a B.A. and an M.A. from California State University, Los Angeles. These two pursuits — police work and literature — would eventually merge.

Wambaugh joined the LAPD in 1960 as a patrolman and later earned the rank of detective sergeant. He submitted short stories for publication, but they were rejected. An editor suggested he try writing a novel, so Wambaugh set to work on a longer piece. His experiences on the job were the basis for his first book, The New Centurions. The novel immediately attracted attention from the press, and subsequently, from Wambaugh's superiors on the force. The New Centurions, published in 1971, tells the story of three young police officers over the course of five years. The men meet in a police academy, and upon graduation, they are assigned to patrol different sections of the city. The three do not see each other again until they reunite during the 1965 Watts riots. The book was a financial success, appearing on the New York Times Best Seller list on February 7, 1971 and finally bowing out 32 weeks later on September 26, having risen as high as number two on the list. A few years later, Wambaugh would work on the film adaptation of his work.

The New Centurions was praised for its realism and inside view of the psyche of policemen, qualities that would be hallmarks of Wambaugh's literary career. In a New York Times review, Thomas Fleming said the book "...performs one of those essential and enduring functions the novel — and the novel alone — can perform. It takes us into the hearts and minds, into the nerves and (sometimes literally) into the guts of other human beings — and, in the hands of a good writer, it achieves a mixture of empathy and objectivity that creates genuine understanding."

Wambaugh's second novel, The Blue Knight, is about the opposite end of a policeman's career. The book is about Bumper Morgan's last three days as a police officer, during which time readers learn about the hourly details of his job, including the free meals Morgan takes. This book attracted more negative LAPD attention, especially because of the protagonist's behavior. Wambaugh said the problems in his novels happened because he "...depicted cops as human beings, complete with rotten moods and frailties, and not as the robots people are accustomed to seeing on television shows about policemen.... I could see the administration being mad if I were giving away secrets, but I'm not: there are no secrets to reveal." The novel was later turned into a made-for-television movie in 1973 and a television show in 1975. His first two novels behind him, Wambaugh set his attention to an emotionally grueling project and his first foray into non-fiction.

Wambaugh's true-crime book The Onion Field tells the story of the two policemen and two criminals whose lives collide one March night. On March 9, 1963, two policemen, Ian Campbell and Karl Hettinger, are working their beat when they pull over a car containing two men, Gregory Powell and Jimmy Smith. Powell and Smith overpower Campbell and Hettinger and drive to the onion field for which the book is named. Campbell is killed execution-style. Hettinger escapes. Powell and Smith are captured the next day. Wambaugh's book follows the story, tracing the lives of the men, as Powell and Smith go through seven years of trials and retrials and Hettinger breaks down, becomes a kleptomaniac and is dismissed from the police force. He eventually becomes a farmer and works near the same onion field in which his partner was murdered.

The Onion Field was published in 1973, ten years after Campbell's murder and eight years after the publication of Truman Capote's seminal true-crime work In Cold Blood. In fact, in a New York Times review of The Onion Field, James Conaway compares Wambaugh's book to Capote's. Conaway writes "Wambaugh is obviously indebted to Capote — who, in 1965, demonstrated his skill in applying a novelist's techniques to a true-crime narrative. Both In Cold Blood and The Onion Field involved a prodigious amount of research, and are equally compelling. Wambaugh takes greater liberties with his characters and he lacks Capote's neatness. But in terms of scope, revealed depth of dramatic character, and dramatic coherence, this is the more ambitious book."

The book's success was sufficient to propel Wambaugh into the literary spotlight. He earned an Edgar Allan Poe Award (given by the Mystery Writers of America in various categories) for the work. He began receiving more public interest, enough that he resigned from the LAPD in 1974, citing the increased publicity as his reason for leaving. That same year, a fresh-from-the-force Wambaugh released The Choirboys, a look at the tense existence of policemen through a darkly comic lens. Like his earlier work, The Choirboys focused on the psychological underbelly of a policeman's work, but this time using after-work meetings as the setting. The meetings, called "choir practice" by the men who take part, are a way to relax after the emotional tension of a night at work.

A film adaptation of The Onion Field was released in 1979, and Wambaugh worked on the script. More books followed throughout the 1980s and 1990s, and most of them were set in Southern California. One notable exception was another non-fiction work, The Blooding, an account of the first murder case solved by genetic fingerprinting. Another noteworthy non-fiction pick from his oeuvre is Fire Lover, the story of an arson investigator and fire captain who commits a string of arsons in California.

In 2006, Wambaugh returned to the fiction beat, publishing Hollywood Station in 2006 and Hollywood Crows in 2008. True to the titles, the novels are about police work in the surreal landscape of Hollywood, California.

The Pennsylvania-born Wambaugh has adopted Los Angeles as his city. He is a "rooted man," writes Los Angeles Times reviewer Tim Rutten, rooted not just to that mystic, glimmering city in the West, but to the people whose job is to maintain order in that city — the men and women of the Los Angeles Police Department.