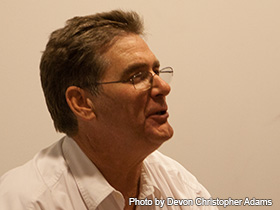 Weigl, a former Penn State professor,faced the harsh realities of life while in Vietnam. It was the rigors of war that helped him to find poetry. At the time of this writing, he is a well-known poet and translator.

Poet Bruce Weigl was born in Ohio in 1949. He served meritoriously in Vietnam, a time in his life that influenced his poetry greatly. Educated at Oberlin College, he would eventually take a position at Penn State University for 14 years before returning to his native Ohio.

Bruce Weigl was born on January 27, 1949, in Lorain, Ohio, to Albert Louis Weigl, a foundry worker, and Zora Weigl, a packing plant worker. He married Jean Kondo, an artist, and together they had one son and one daughter.

Weigl enlisted in the United States Army shortly after his 18th birthday and spent four years in the service. He served in Vietnam from December 1967 to December 1968 and received the Bronze Star. When he returned to the United States, Weigl obtained a bachelor's degree from Oberlin College and a Master of Arts Degree in Writing/American and British Literature from the University of New Hampshire. From 1975-1976, Weigl was an instructor at Lorain County Community College in Elyria, Ohio. Weigl's first full-length collection of poems, A Romance, was published in 1979.

After he received a PhDfrom the University of Utah in 1979, he was an assistant professor of English at the University of Arkansas and later held the same position at Old Dominion University. During the 1980s, Weigl published two more poetry collections, The Monkey Wars (1984) and Song of Napalm (1988). In 1986, Weigl became an associate professor of English at Pennsylvania State University and was later promoted to a professor of English. In 1999, he published two more poetry collections, Archeology of the Circle: New and Selected Poems and After the Others. He left Penn State in 2000 and took a position at Lorain County Community College as a distinguished professor. He also published a memoir that year titled The Circle of Hanh: A Memoir (2000).

Weigl has contributed various well-renowned poems for over 25 years. Many of his poems are inspired by the time he spent in the U.S. Army and Vietnam. In The Circle of Hanh, Weigl writes, "The war took away my life and gave me poetry in return...the fate the world has given me is to struggle to write powerfully enough to draw others into the horror." In addition to writing his own poetry, Weigl translated poems of North Vietnamese and Viet Cong soldiers captured during war with Thanh T. Nguyen of the Joiner Research Center. The two men accepted an invitation from the Vietnamese Writers Association and traveled to Hanoi to receive assistance in translating the poems.

Weigl's first award was a prize from the American Academy of Poets in 1979. He received two Pushcart Prizes, a Patterson Poetry Prize, and a Yaddo Foundation Fellowship. Weigl was awarded the Bread Loaf Fellowship in Poetry in 1981 and was awarded a grant from the National Endowment for the Arts in 1988 for Arts and Creative Writing. He was also nominated for the Pulitzer Prize in 1988 for Song of Napalm. Weigl additionally served as the president of the Associated Writing Programs.

At the time of this writing, Weigl is a visiting distinguished professor at Lorain County Community College.