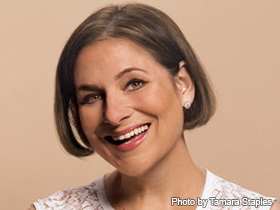 Journalist and well-known Chick Lit novelist of In Her Shoes, Jennifer Weiner lives in Philadelphia.

Popular Chick Lit novelist, Jennifer Weiner wasa reporter for the Centre Daily Times in State College, Pennsylvania, has written columns for The Philadelphia Inquirer, and is a resident of Philadelphia, a place that has served as the setting for some of her work. Read more here.

"How you live your life and what you think of yourself is more important than your body size," affirms author Jennifer Weiner. "Remember, they don't put your body weight on your tombstone." These simple words are the building blocks of Weiner's overarching credo, which radiates from each of her four semi-autobiographical books. Weiner is a best-selling author, current columnist for the Philadelphia Inquirer, and was involved in the making of the film In Her Shoes, a movie adapted from her second novel. Weiner's characters are constantly battling issues such as self-esteem, weight, in-laws, philandering spouses, and of course, the struggle of finding love in a crisis-ridden world. Women everywhere find solace in her blunt honesty and sarcastic humor, perhaps seeing a reflection of themselves in her noble heroines.

Jennifer Agnes Weiner was born on an army base on March 28, 1970, in De Ridder, Louisiana. After moving to Simsbury, Connecticut, with her family at the age of two, Weiner proceeded through her schooling wearing what she jokingly refers to as "many unfortunate hair and fashion choices." She graduated from Simsbury High School and was the graduation speaker. She moved on to Princeton University, where she won Princeton's "Academy of American Poets" prize. She majored in English and completed her thesis on portrayals of maternity in women's novels and film.

She began to juggle different journalistic endeavors such as writing features for the Lexington Herald-Leader (in Kentucky ) while also writing two Generation X columns a month for the Philadelphia Inquirer, all of which acquired national readership. The Philadelphia Inquirer hired her as a general-assignment features reporter, and she moved to Philadelphia, where she wrote profiles, short-stories about issues plaguing youth, and various current-events articles. She became a contributing editor for Mademoiselle, writing a monthly column about workplace survival, and she made frequent appearances on Philadelphia's late night TV show, "Philly After Midnight," for her witty quips on pop culture and sarcastic critiques of the social world.

The inspiration for her first novel came to her after a torrid break-up with a boyfriend, which fueled her writing. In an interview with Philly Stories, Weiner says, "recognize that every crappy thing that happens in your real life can be material some day!" She developed Good in Bed during her evenings after work. After an arduous search and being rejected by twenty-three out of twenty-five literary agents, who questioned why the main character had to be fat, Pocket Books (now Atria Books) bought Weiner's first novel and the rights to her second novel. When it was published, Good in Bed and its overweight character, Cannie, received rave reviews across the country in May 2001. By the end of the month, it made New York Times best-seller list. The rights to Good in Bed were sold in fifteen countries worldwide, and it became an international best-seller. In December 2001, Weiner left The Philadelphia Inquirer to write fiction full time.

Her second novel, In Her Shoes, was published in 2002, and it gives voice to two sisters living in Philadelphia and their rocky relationship. Rose, the slightly-overweight and uptight reporter, and Maggie, the buxom, beautiful trouble-maker, only have a shoe size in common. Not surprisingly, Rose and Maggie's dynamic came partially from Weiner's relationship with her own sister. The acclaim Weiner received for her second book skyrocketed when Hollywood bought the rights to In Her Shoes, and stars Toni Collette and Cameron Diaz signed on to the project. In Her Shoes, directed by Curtis Hanson, was released on October 7, 2005.

Weiner again began to juggle several things at once, composing her third novel, Little Earthquakes, and taking care of newborn daughter (with husband Adam Bonin), Lucy, who was born on May 10, 2003. Little Earthquakes was published in September 2004. Weiner used this novel as a vehicle for addressing issues of pregnancy and self-worth in today's society. Too often, the media idealizes motherhood and creates unattainable expectations for real mothers. Her novel is semi-autobiographical and speaks of concerns the author actually dealt with. Weiner's unforgiving cynicism of the mass media image gives hope and support to millions of women.

Weiner also wrote a mystery novel, Goodnight Nobody, which was published in September 2005. She tackled the secrets of suburbia and how seeming-perfection can be anything but. While exploring a new genre, Weiner is also spoke of and critiqued her own childhood in Simsbury, Connecticut. For the first time, Weiner takes her main characters out of her adopted hometown of Philadelphia and into an imaginary suburb of the Northeast.

What sets Weiner's novels apart from the rest of the chick-lit troop is that her main characters do not equate losing weight with happiness. In many other novels, the heroine only overcomes her adversity after becoming thin and gaining a boyfriend. Weiner's novels show that plus-sized women need not be comic relief or the lonely, depressed characters they have been cornered into. Self-acceptance and life success are themes universal to women, no matter their weight. Overall, Weiner's novels strongly advocate being comfortable in one's own skin. As Weiner said for an article in the Centre Daily Times, "You can have a happy ending even if you don't look like the girls you see on the sitcoms or in the movies."

Weiner also wrote a short story collection entitled The Guy Not Taken, which was published in 2006. Her more recent books include Certain Girls, Best Friends Forever, Fly Away Home, and Then Came You. Weiner is also the co-creator and producer of ABC Family's television series State of Georgia, which premiered in 2011. She writes for the Huffington Post on occasion and also blogs regularly. She stays updated with technology and social networking; Time magazine deemed Weiner one of its 140 Best Twitter feeds. She continues to write fiction full time.