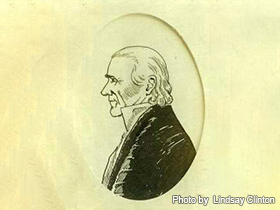 Weiser, a translator for the Indians of Pennsylvania, revealed his fascinating experiences in journals, one of which is A Journey from Pennsylvania to Onondaga in 1743.

Conrad Weiser was born in Germany in 1696. In 1709, his family migrated to what is now New York. Early in his teenage years, Weiser began to socialize with neighboring tribes of Indians. By learning their language and customs, he became the foremost interpreter in the East. Over the next three decades, Weiser became a successful businessman, landowner, tanner, and farmer. His most notable accomplishment is considered to be the founding of Reading, Pennsylvania. He wrote two books, Early Western Journals and Conrad Weiser's Account Book, in which he discussed the many trials and accomplishments of his life. He died in 1760.

Conrad Weiser was born in the German principality of W??rttemberg on November 2, 1696. Shortly after his birth, Conrad's father heeded Queen Anne of England's invitation to migrate to England and the British Colonies in America. Eventually, the Weiser family settled in New York. By the age of 15, young Weiser had developed a keen sense of language and a genuine interest in the local Iroquois Indian population. He applied his linguistic abilities to learn their language, with hopes of improving treaty negotiations between the English settlers and the Indians. He was concerned with stabilizing relations between the two parties. Once he learned their language, it didn't him long to understand their religion and customs. Eventually, he grew to appreciate Indian culture as much as his native German and adopted English heritages. The Indians learned to trust and love him as one of their own. They appreciated Weiser's talents.

While living in New York, Weiser met Shiekilammy, Chief of the Oneidas, from the powerful Six Nations (the Iroquois Confederacy). They met in the woods of New York where Weiser was hunting. According to legend, Shiekilammy was so pleased to meet a white man who spoke his language that they became friends almost immediately. Weiser and Shiekilammy formed an effective partnership—the white man and the Indian—and were determined to establish good relations between the foreign settlers and the native Indians.

Weiser had married young and proceeded to have 17 children, only seven of whom lived to adulthood. After marrying, Weiser moved from the Mohawk valley of New York to the Tulpehocken Valley in Pennsylvania. With Chief Shiekilammy and James Logan, Provincial Secretary for Pennsylvania, he then authored the Commonwealth's Indian Policy. Using his intimate knowledge of the Indian way of life, Weiser created a policy that strengthened the Six Nations by giving them sovereignty over all other Indians in Pennsylvania. This policy also strengthened the position of the English, since it allowed the Six Nations to deal with other Indian tribes opposed to their plans. Because Weiser was respected by both parties to these negotiations, few objected to the policy he had crafted. He is commemorated in the Alle-Kiski area of Armstrong County for his early diplomacy on behalf of the colonial government in 1748.

Even if Weiser had not developed Indian policies or authored treaties, he would still be remembered as a model citizen who was a significant player in Pennsylvania's expansion. In 1749, he helped found the city of Reading, and he played a role in the creation of Berks County in 1752. In Conrad Weiser's Account Book, he revealed that he paid for the writing and copies of the petition, filing fees, and surveys for the proposed county.

Early Western Journals is the first official record of the English settlers' trips into the Indian country west of the Alleghenies. Weiser writes that his main purpose on the trip was to carry and deliver a present to the Indians from the Pennsylvania and Virginia authorities. Some of these journals are now available online at the Library of Congress. In his later life, Conrad Weiser applied the skills and experience he had gained from his early years as a translator and interpreter to a series of more practical and profitable enterprises. He was a very successful farmer, tanner, and shop owner. At the age of 64, Weiser's health rapidly deteriorated, and he passed away. Upon his death, an Iroquois Indian observed, "We are at a great loss and sit in darkness...as since his death we cannot so well understand one another."

His name is currently preserved by the school district centered on Robesonia in Berks County.