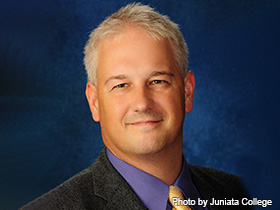 Gabriel Welsch has published poems in a great number of journals and lives in State College.

Poet Gabriel Welsch was born in 1970 in Sanford, Maine. After graduating from Downingtown High School, he attended Pennsylvania State University and received his BA and MFA. He married Jill Wyant in 1994. Along with receiving a Pennsylvania Arts Council Individual Artist Fellowship for Fiction, he was the inaugural Thoreau Poet in Residence. In 2006, he published his first book, Dirt and All Its Dense Labor.

Gabriel Welsch was born in 1970 in Sanford, Maine to David and Camille Welsch. After graduating in 1989 from Downington High School, he attended Pennsylvania State University and obtained his Bachelor's degree in English in 1993. Meeting the love of his life, Welsch and Jill Wyant were married in 1994. He was an editorial assistant in the College of Arts and Architecture in 1996. Welsch could not bring himself to leave Happy Valley so he decided to stay and proceed with his Masters degree (MFA) in English in 1998. As the assistant director of communications in the College of Liberal Arts, Welsch edited the Liberal Arts magazine and supervised print and electronic media. In 1999, Kent State University gave Welsch the Hart Crane Memorial Poetry Award. Welsch and his wife had their daughter, Isabella, in 2001. For three years Welsch held the associate director position of the Master of Fine Arts Program in the Department of English at Pennsylvania State University.

In 2002, Welsch was the inaugural Thoreau Poet in Residence at the Toledo Botanical Garden. While Welsch was a finalist for the 2003 Iowa Prize for Short Fiction, he earned a Pennsylvania Arts Council Individual Artist's Fellowship for Fiction in 2003. Welsch was an assistant to the dean for advancement and manager of publications and public relations at Penn State's College of the Liberal Arts from 2005 to 2007. During his undergraduate career, Kalliope Penn State's literary magazine published some of Welsch's works.

Welsch wrote some works that was published in Kalliope, Penn State's literary magazine, during his undergraduate career. His first poem, "Domestic," was published in Confluence. Welsch considered himself as a fiction writer and he still enjoys writing in that genre. However, Robin Becker and John Haag, who had read and critiqued his poetry, encouraged him to endeavor more into his poetry work. Success came when his first poetry book, Dirt and All Its Dense Labor was published in 2006 by Word Tech Editions.

In Welsch's poetry, there are themes like working, the natural world, botany, horticulture, Pennsylvania, family, and self. Pennsylvania figures prominently in Dirt and All Its Dense Labor. Welsch's poem "Pennsylvania" exemplifies a mixture of these themes:

The state with the prettiest name and the ear of an ancient ridge— its runnel of stone cluttered with the wet trees that hold taut the devastating brown in winter, the state with air cluttered by the noise of more miles of road than any other state, its cities rarefied by steel and freedom-...

Welsch considers himself as a lyric poet and is well-known for his poetry. However his stories, reviews, essays, and articles were published along with a novel he wrote as well.

At the time of this writing, he resides in Huntingdon with his wife, Jill, and their daughter Isabella. He is theVice President of Strategic Communication and Marketing at Juniata College.