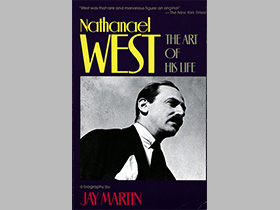 Novelist Nathanael West, author ofMiss Lonelyhearts (1933),made his home in Erwinna for a time.

Nathanael West was born on October 17, 1903. He managed several hotels and also wrote several novels, including The Secret Life of Balso Snell (1931), Miss Lonelyhearts (1933), and A Cool Million (1934). He also worked as a scriptwriter and editor in Hollywood. He married Eileen McKenney in 1940, the same year both were killed in a car accident in El Centro, California.

Nathan Weinstein (later Nathanael West) was born on October 17, 1903, in New York City. He was the first of three children born to Max and Anna West, two Jewish-Americans who lived in New York. His parents had fled Russia to escape rampant anti-Semitism. Weinstein's Russian Jewish ancestry had little effect on his childhood since his parents rarely attended synagogue and spoke only English and German in their household. Max Weinstein was a building contractor in New York City.. He had projects all across the city, and most of the time the family lived in whatever apartment building Weinstein's father had last completed.

West was an introverted child who was doted upon by his mother and father. According to the biography by Jay Martin, Nathanael West: The Art of His Life, "Max was absolutely possessed, it seems, by three aspirations: to live fashionably; to send his family to the country during the summer; and to educate his children." Young Weinstein's education was taken extremely seriously and the family took excursions to the countryside every summer where Weinstein acquired a love for outdoor activities like hunting and fishing.

Throughout his childhood Weinstein was a big reader. He read Tolstoy by the age of ten and had mastered many great authors, including Shakespeare, Dickens, and Dostoyevsky, by the time he reached his teenage years. Though he obviously was very intelligent, he performed poorly in school. Weinstein registered for high school in 1917, and there he started to develop the cynicism that would be a characteristic of his later life and writings. Weinstein's anti-social and rebellious behavior continued when he refused to enroll in his senior year of high school. Not having enough credits to enter college, Weinstein proceeded to fabricate enough extra credits to gain entrance to Tufts University. Weinstein later applied to Brown under the name Nathan Weinstein. Nathan Weinstein was the registered name of another student at Tufts who had dropped out of the school with 57 credits. Weinstein enrolled under this name, thereby gaining all of his core course credits. He was able to finish his college degree in two and a half years due to this deception.

Weinstein became popular with the students and socialized with fraternities, though he never could join them due to the fact that he was Jewish. Around this time in his life Nathanael Weinstein started going by the name he would claim for the rest of his life: Nathanael West. The reasons he did this were mixed; most importantly, he was always making attempts to change his identity, and this name change helped him develop his false persona. He began making the kind of social and literary connections that would define the rest of his life.

In 1924, West graduated from Brown and began to work for his father doing construction. Two years later West moved to Paris, where he stayed for a brief amount of time. He later would claim that he was destitute and an expatriate while in Paris.

All of West's novels and other works dealt with surrealist concepts. From the strange roundabout writing of The Dream Life of Balso Snell to the more straightforward writing of The Day of the Locust, West made it certain that he was no ordinary storyteller.

A few years after his return from Paris, West started to come into his own as a figure within literary circles. He was the associate editor for a literary magazine, Contact, which failed after only three issues, and a slightly more popular satirical magazine named Americana.

In the early 1930s West purchased a small farm in the area of Erwinna in Bucks County, Pennsylvania, after having been the night manager of a hotel on East 23rd Street in New York City. The country did not hold him long and soon he became the manager of another hotel named the Sutton Club Hotel in 1930. While working as a manager at this hotel, West made many literary contacts. He was known for letting other authors to stay for free in empty rooms simply because he enjoyed their company. In 1931, West published his first book: The Secret Life of Balso Snell. Only 500 copies of this work were first printed. The Secret Life of Balso Snell is a story of a man going on a literary journey that starts when he enters a Trojan Horse. During the journey he meets several people who tell him stories. Eventually disgusted by all of the other people, Snell falls asleep and encounters even more stories in his dream. Many critics disliked the book; however, a few loved it. The book is surrealistic and does not follow normal literary conventions. It could be described as a collection of strange short stories. In his review of the novel in The New Review, Julian L. Shapiro said, "One of the reasons why the hiredmen, or the tiredmen, have failed to understand is because West used parts of the book to fling handfuls of dung in their faces. That may have been an error on West's part, not because the critics didn't deserve it, but because the stuff probably got in their eyes...West's book is at least funny, but no one has written about that. It's a good sort of literary fooling, a nonsense both above and below what the critics sweat for..."

In 1931, West began working on Miss Lonelyhearts. He moved frequently while working on this story. In 1932, West published some writing that later became Miss Lonelyhearts. The full version of Miss Lonelyhearts was published in 1933 with good reviews but awful sales. Publication was limited to 2,200 copies, and the publisher went bankrupt right before publication. Miss Lonelyhearts was West's answer to Fyodor Dostoevsky's Crime and Punishment. West was a known fan of Dostoevsky throughout his life. West adopted Dostoevsky's style of writing. The book also parallels themes of religion, love, and crime that are present Crime and Punishment, but West twists the style to fit his own writing and makes the storytelling more suited to his time period.

During this period, West started his work in cinema as a film reviser for inexpensive romance movies made by Columbia Pictures. Through his contacts in literary circles and Hollywood, West gained the friendship of author F. Scott Fitzgerald. This friendship continued until their deaths. In 1934, West published his third novel, A Cool Million or the Dismantling of Lemuel Pitkin, which garnered poor reviews and meager sales. Literary critic George Stevens wrote: "The opening chapter of this novel is mildly amusing; the rest seems superfluous." The book was written as a satire of the works of Horatio Alger, an author who wrote rags to riches stories. In A Cool Million, a character leaves home to make his fortune, but he becomes poorer the harder he works. An anonymous critic wrote, "A Cool Million is a delightful parody, with satire which hits uncomfortably near the truth. It is not a profound book, but it is a funny one."

In 1935, West started to live in Hollywood, where he worked as a writer for Republic. In 1938, he wrote his second Broadway play, Good Hunting , which closed after two shows. In 1939, he published The Day of the Locust, which received mixed reviews. George Milburn from the Saturday Review of Literature wrote that it The Day of the Locust was a book "about the Hollywood nobody knows, except for an occasional resolute explorer who has straggled back from there. It has very little to tell about the motion picture industry as such, although one of the main characters is a studio employee, and there is one memorable chapter about his getting lost in the maze of a movie lot — the only passage in fiction I know of like it is Stephen Dedalus's vision of hell." One famous quotation from The Day of the Locust sums up the message of the book: "It is hard to laugh at the need for beauty and romance, no matter how tasteless, even horrible, the results of that need are. But it is easy to sigh. Few things are sadder than the truly monstrous."

In 1940, West married Eileen McKenney, the sister of author Ruth McKenney. Her most famous work was a play titled My Sister Eileen. During this time, West was also involved in several far-left political groups.

On December 22, 1940, West was driving home from a hunting trip in Mexico with his wife. He ran a stop sign in El Centro, California, and crashed into another car. Both West and his wife were killed in the crash. West's death was less than 24 hours after his good friend F. Scott Fitzgerald had suffered a fatal heart attack in Hollywood. West was only 37-years-old when he died.