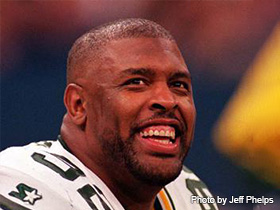 Known as "the Minister of Defense," Hall of Fame defensive end Reggie White played several years with the Eagles.

Reginald White was born on December 19, 1961, in Chattanooga, Tennessee. He had strong religious values, and he was ordained a Baptist minister at age 17. Nicknamed the "Minister of Defense," he was a defensive lineman for the Philadelphia Eagles from 1985 until 1992 and for the Green Bay Packers from 1993 to 1998. White went to the Pro Bowl for a record 13 consecutive seasons. He ended his magnificent football career with the Carolina Panthers in 2000. He died on December 26, 2004, at the age of 43. In 2006, he was inducted into the Pro Football Hall of Fame.

Reginald (Reggie) Howard White was born on December 19, 1961, in Chattanooga, Tennessee to Thelma Collier and Charles White, who were unmarried at the time. He was raised by his mother until age eight when he went to live with his grandmother, Mildred Dodd. His family had strong religious ties and Christian values. They attended the local Baptist church regularly, which is where White was inspired by the ministers and teachers. At age 12, he proclaimed to his mother that he wanted to be both a football player and a minister. By age 17, he became an ordained Baptist minister. White attended Howard High School in Chattanooga where he played football and basketball, earning All-America honors in football and all-state honors in basketball.

In 1980, White was accepted to the University of Tennessee. He made a large impact with the Volunteers' football team, and he became the record holder for sacks in a game with four, a season with 15, and college career with 32. He also accumulated 201 solo tackles, 92 assisted tackles, and four fumble recoveries. During his sophomore season, he was chosen as Coach Johnny Major's most improved player. As a senior, he won all-conference, unanimous All-America, and SEC Defensive MVP honors. White was also one of four finalists for the Lombardi Award, which was given to outstanding college linemen. After his college career, he was named to the all-time Tennessee team and the SEC team of the 1980's. During his years as a Volunteer, he earned the name "Minister of Defense," a nod to his religious affiliation and his dominating presence on the defensive line.

After graduating from Tennessee in 1984, White started his football career in the United States Football League (USFL) with the Memphis Showboats, signing a five-year, $4 million contract. His tenure in the USFL was short lived since the league was beaten out by the National Football League (NFL) for many years, and White felt a sense of financial instability there. After a few games into the 1985 USFL season, he moved to the Philadelphia Eagles. They signed him to a meager $1.85 million four-year deal, which was a large cut in salary because Philadelphia had to buy out the remaining 3 years on his Memphis contract. Earlier that year, White met his wife, Sara, in church. They married on January 5, 1985. They went on to have two children, Jeremy and Jecolia. They then moved to Philadelphia, which is where White began his NFL career.

After missing the first few games of the 1985 season, White began making his mark on the Eagles with ten tackles and two and a half sacks in his very first game. By the end of the season, he accumulated 13 sacks in just 13 games, and he was named NFC Defensive Rookie of the Year. When new head coach Buddy Ryan arrived in 1986, White was ready to show his full potential. Ryan began to build the defense around him. That season he made 18 sacks in 16 games, and he was named Most Valuable Player in the Pro Bowl that year after he sacked the quarterback four times. In 1987, he led the league with 21 sacks, which was a NFC-record at the time, but has since been topped by the New York Giants's Michael Strahan with 22. He was also named NFL Defensive Player of the Year. The season was cut short by a strike that ended it at just 12 games. If they were to have played out a full season, White could have very well broken the all-time sack record. During this strike, White emerged as a team leader; he worked hard to keep his team united since they had to face "replacement" teams. This is when discontent began to take shape between White and the Eagles' ownership and management due to their conflicting viewpoints, which intensified as seasons passed. The only thing keeping White in his job was his dominance on the field and the tremendous stats he continued to compile.

In 1988, he led the NFL in sacks for the second straight year. In 1989, White signed a four-year contract extension for $6.1 million, making him the highest paid defensive player in the NFL. Although he struck a great deal, the hostility between White and owner Norman Braman began to grow. In 1992, White became a plaintiff in a lawsuit against the NFL ownership in favor of increasing the powers of free agency. The lawsuit resulted in the concept of unrestricted free agents in 1993. That same year White became one of the most sought after unrestricted free agents because his contract with the Eagles had expired. He was not tendered another offer in Philadelphia. After accumulating 124 sacks over eight seasons, becoming the Eagles' all-time sack leader, he signed with the Green Bay Packers for a generous $17 million spread out over four years. White again became the highest paid defender in the NFL.

White carried on his reign in Green Bay, and was annually selected to the Pro Bowl year after year through 1998. His 13 year consecutive run to the Pro Bowl became an NFL record. He helped turn the Packers' defense around by taking their defensive rank from 23rd in 1992 all the way to 2nd after the 1993 season. White was a cornerstone and the foundation of this Packers team, revitalizing the franchise and leading it to a 1996 Super Bowl win over the New England Patriots. In Super Bowl XXXI, he recorded a record three sacks against the quarterback. White gained the NFL Defensive Player of the Year award for the second time in 1998. Afterwards, White retired from Green Bay in 1999. During his time with Green Bay, he recorded another 68.5 sacks. Green Bay retired his jersey number (92) that year, and Philadelphia did the same. After returning to his ministry duties for a year, in 2000, White signed with the Carolina Panthers for $1 million, which was his last NFL season. After a 15 season career, White became second all-time with 198 recorded sacks and was voted to the NFL All-time Team in 2000. He was named to the NFL's All-Decade Teams of the 1980s and 1990s, the 75th Anniversary Team, and was voted first-team All-Pro 10 times in his 15 years in the NFL.

White continued his other career as a Baptist minister. He was devoted to his life's calling as a minister throughout his football career and carried those same values onto the playing field. He was never found swearing or getting angry with his teammates. White's beliefs were so strong that they occasionally got him into trouble; in 1997, he made a speech to the Wisconsin State Legislature in which he used stereotypes about minorities and made reproachful remarks about homosexuals. White had spent many hours preaching on the street corners in Philadelphia and gave money to dozens of Christian outreach organizations. He spoke as a member of the Fellowship of Christian Athletes and impacted the lives of many young people. He and his wife, Sara, built Hope Place, a shelter for unwed mothers, on a property near their home in Tennessee. They were also the founders of the Alpha and Omega Ministry to sponsor a community development bank in Knoxville.

On December 26, 2004, he suffered from a fatal cardiac arrhythmia at his home in Cornelius, North Carolina. In 2006, he was inducted on the first ballot to the Pro Football Hall of Fame.