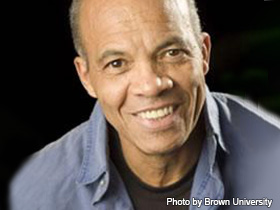 Novelist John Edgar Wideman grew up in Pittsburgh. He has taught at the University of Pennsylvania and written about the city in his novelPhiladelphia Fire (1990).

John Edgar Wideman was born in Washington D.C. on June 14, 1941, but he has called Pittsburgh his real home. A number of his works reflect the Pennsylvania environments where he has lived, particularly the Homewood district of Pittsburgh and the area near the University of Pennsylvania in Philadelphia. He was the second African American to become a Rhodes Scholar. He is also a two-time PEN/Faulkner Award winner. In 2011, he was awarded the Anisfield-Wolf Lifetime Achievement Book Award. At the time of this writing, Wideman is a professor at Brown University.

John Edgar Wideman was born June 14, 1941, in Washington, D.C. His parents were Edgar and Betty French Wideman. He spent most of his childhood living in Pittsburgh, Pennsylvania. In 1965, he married Judith Ann Goldman, with whom he had three children, Daniel Jerome, Jacob Edgar, and Jamila Ann.

Much of Wideman's novels depict the experiences of African-American urban life. A Glance Away is the story of a day in the life of a drug addict, which reflects the experiences that Wideman witnessed during his youth in Homewood, a predominantly black, lower-income neighborhood in Pittsburgh. Many of his other novels also reflect his time spent in Homewood, including Brothers and Keepers (1984), an autobiography about Wideman's relationship with his younger brother who fell victim to drugs and crime.

Wideman was a Kent Fellow at the University of Iowa in 1966. In 1974, he was inducted into the Philadelphia Big Five Basketball Hall of Fame for the time he played at the University of Pennsylvania. He was given the PEN/Faulkner Award for fiction in 1984 for Sent for You Yesterday(1983) and again in 1991 for Philadelphia Fire (1990), which also earned him an American Book Award. He is the only author to receive two PEN/Faulkner Awards. In 1984, he also received a National Book Award nomination for Brothers and Keepers. In 2004, the City College of New York awarded him the Langston Hughes Medal for his body of work with roots in African culture.

Wideman has authored thirteen novels, six collections of short stories, and two memoirs. Fanon (2008) "is part fiction and part biography and memoir." In 2011, Wideman won the Anisfield-Wolf Lifetime Achievement Book Award. At the time of this writing, he works as a professor at Brown University and is a member of the editorial board for Conjunctions, a literary journal.