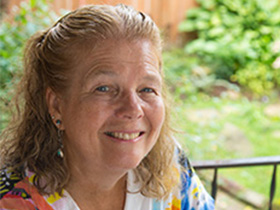 A writer of children's books—some of which are drawn from years of international experience—Karen Lynn Williams teaches in the Pittsburgh area.

Karen Lynn Williams was born on March 22, 1952, in New Haven, Connecticut. She used her Master of Arts degree in deaf education when she moved to Africa with the Peace Corps and volunteered in a school for the deaf and later taught as an English teacher. She also began writing children's books during her time in Africa, and had her first book published in 1990 after moving back to the States to Pittsburgh, Pennsylvania.

Karen Lynn Williams was born on March 22, 1952, in New Haven, Connecticut to Russell Drake (an optometrist) and Lenora Mary (a homemaker).She earned a BSfrom the University of Connecticut in 1974 and continued her education at the Southern Connecticut State University where she earned a Master of Arts in Deaf Education in 1977. On June 18, 1978, she married Steven Williams, a physician.They had their first child, Peter, in 1979. Their second son, Christopher, was born in 1981 in Africa while she was there with the Peace Corps. Rachel and Jonathan, their two other children, were born in the United States after they returned home.

Williams began a writers club in sixth grade with the goal of becoming the youngest published author. Her dad informed her that Anne Frank was the youngest author to ever be published, and Frank had been around 12 at the time. Williams then realized that her dream was not reachable because she was older than Frank. After earning her master's degree she traveled to Malawi, Africa in 1980 with her son Peter and her husband. She worked for the Peace Corps as a volunteer in a school for deaf children, according to her website. She then taught English in an all boys school. During her time in Africa, she wrote a lot, and she also took a course on writing for children though the Institute for Children's Literature. Her first articles and stories were published in magazines for children while she was still in Africa.

In 1983, she and her family returned to Pittsburgh, Pennsylvania. She joined a writer's group then, which she still continues to attend once a week. In 1990, her first book, Galimoto, was published. When it became a Reading Rainbow Feature, it was one of the most exciting times of her life, she says on her website. A "galimoto" is toy that the children in Africa make. A galimoto is built to resemble a truck, a car, or a bicycle for example.The story is about Kondi and his effort to make his dream of building such a toy come true. "His perseverance and the pleasure he takes in his accomplishment are just two of the delights of this appealing story," according to Ellen Fader of The Horn Book."The graceful watercolors give readers the flavor of life in the southern African country of Malawi."

From 1990 to 1993, Williams lived in Deschapelles, Haiti, where her husband worked as a doctor in the district hospital. While there, Williams volunteered at the hospital but continued to write as well. She also helped some of the village women gain money when she started a quilting industry. During this time she wrote Tap-Tap (1994) and Painted Dreams (1998). Painted Dreams is a picture book about a little girl named Ti Marie in Haiti that draws pictures on the side of her house using charcoal but her mother doesn't appreciate it and washes it off. Then, after finding discarded paint from a local artist, Ti Marie paints on the wall of the market where her mom sells vegetables, and people gather to admire her work and buy her mom's goods. Her mom then become proud of her and starts to admire her work.Carolyn Phelan writes in Booklist, "Beautifully composed and full of life, Stock's watercolors suggest the personalities of the characters through their expressions and gestures...Ti Marie's pictures are drawn in a convincingly naive style. A universal, childlike story with distinctive and well-defined locale."

In 1994, Williams and her family returned to Pittsburgh, Pennsylvania. She continued writing, and she also visited schools and libraries to do lectures, according to her Web site. She also began to teach for the Institute for Children's Literature. From 1999 to 2000, her family went back to Haiti. During this time she wrote Circles of Hope (2005), a picture book.

At the time of this writing,she continues to write, visit schools and conduct writing workshops and travel. To Plant a Tree, which is another version of the story around Circle of Hope and includes the background of the story, was published in the 2004 Chicken Soup for the Nature Lover's Soul.Circles of Hopewas published in 2005. She is a lecturer and instructor at Greensburg's Seton Hill University in the masters program in Writing Popular Fiction and in the master of fine arts program in Writing at Chatham College; both schools are located in the Pittsburgh area where she continues to live with her family.