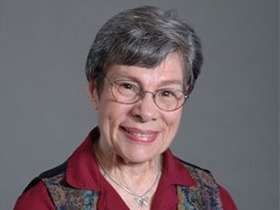 Judy Wolfman was born on July 25, 1933 in Washington, DC. She obtained dual degrees at the Pennsylvania State University. Wolfman then began teaching at several schools in Pennsylvania and she began writing. She wrote her first play during this time, Red vs. the Wolf (1988). Only after Wolfman retired in 1993 did her writing career really take off. Judy Wolfman followed this play with a Life on a Farm (2000) series and a book titled How and Why Stories for Readers Theatre (2004). At the time of this writing, Wolfman continues to teach storytelling and writing at schools, libraries, and various conferences.

Judy Wolfman was born on July 25, 1933 in Washington, DC. Her mother said that when little Judy came into the world, she swore that she was dancing. Her feet and arms moved to the music every time the radio played. When she was four years old she was enrolled in a dancing class. Wolfman learned quickly and became frustrated when the class was slowed by other learners; therefore she ended up being withdrawn. This was just the beginning of her attraction to performing. Her fascination continued and turned into the creation of plays and characters.One summer, when Wolfman was 12 years old, she convinced a few of her friends to be in plays that she created. This would continue to be an interest to her, but little did she know that someday she would be using it to teach children.

This love of singing, dancing and acting continued into high school for Judy Wolfman. She was involved in plenty of activities which included sports, the school newspaper, and cheerleading; she was even an honor student. Wolfman became an entertainer for the United Service Organization (USO), however this didn't last very long. Her mother saw her being stared at by the young soldiers at her first show and she quickly took her out of the group. After her experience with the USO, Wolfman continued to dance in college productions, community theatres and became a choreographer.

Judy Wolfman's young adulthood was filled with activities quite different from her childhood. Wolfman went to college at Pennsylvania State University where she graduated with a major in Home Economics in 1955. Soon after she graduated, she realized that she had been guided down the wrong path. She knew that she did not enjoy what she had spent the past four years doing. Left shattered, Wolfman put the pieces back together and found a job as an Extension Home Economist. This job allowed her many opportunities, one of which was doing a radio show in Chambersburg, PA. The radio personality at this station was Al Wolfman, the "morning man." The two started talking and immediately there was chemistry.

A few years later, she and Al married and moved to Altoona, PA. Here they gave birth to their two sons, Barry and Scott. After seven years in Altoona, the family moved to Dallas, PA, where she opened Back Mountain Nursery School, where the two had their third child, Ellen. When Ellen was just three years old the family moved again to York, PA where they remain to this day. In York, Wolfman worked as the Head Teacher for the Head Start Center in the area and a year later became a pre-school teacher in the York City school district. At this time, 1972, she also returned to Penn State and received her Elementary Education degree and certification.

Shortly after receiving her teaching certification, Wolfman went on to teach kindergarten and first grade. In the first few years of her teaching career, she struggled with trying to get students to pay attention to stories and to read with feeling. Most of the time the children knew the vocabulary well, but just were not enthusiastic about reading. Wolfman thought of a creative way to get the children to help them. She decided to try something that she used to do with her friends and had her students put on plays; she called this reader's theatre. She developed scripts using her student's favorite stories and made copies for the class so that they could act while reading. The children really loved this, so she continued to teach this way. The children seemed to remember much more of the story, they were cooperative with their classmates and she saw a boost of self-esteem in these children. One day she saw an ad for a storytelling meeting and she decided to go. When she found out that storytelling was a profession, she decided to put her whole heart into it leading her to where she is today. This meeting was the founding of the York Tellers Guild of which she is still a member.

In 1993, Judy Wolfman retired from teaching and took her lessons of storytelling and story writing to other people old and young alike. Her retirement from teaching allowed her to focus on writing. She was able to write books, plays, and over 150 sketches, finger plays, poems, articles and short stories. Some of these works appeared in a variety of magazines for children and adults. These include,Turtle, Cricket, Highlights for Children, Central PA, andMature Living. She wrote one play during her time as a teacher,Red vs. the Wolf (1988), which won the Margaret Bartel Children's Play Writing contest in 1987. After retiring, Wolfman was able to write more frequently and published many of her works.The Real Story of Red Riding Hood (1998),The Real Story of the Three Little Pigs (2000), In the Soup (2003), The Golden Goose(2001), andRapunzel(2001) were plays that she has written since then. Some of these plays have since become musicals, with the help of composer and lyricist, David Reiser.

Wolfman was also able to write the nine book,Life on a Farm(2000) series. This series began when she assisted her cousin, David Lorenz Winston, with a pig calendar he was working on as a photographer. After speaking with the family who lived on the farm, she became interested in their daily lives on the farm and decided that it would make a great book. She wrote her first book,Lifeon a Pig Farm,which took six years to get into libraries and schools. The teachers loved the book and wanted more like it. In 2001, Wolfman published four more books, which included information on goat, cattle, crop and horse farms. These were again a great success and therefore she published four more books. This was the final set which included life on a sheep, dairy, apple orchard and chicken farms. Still today these books are quite a success. Several reviews have been written on theseLife on a Farmseries books and all have good things to say about the detail and content of the books, as well as the photography. One reviewer, Andrea Sears Andrews fromChildren's Literaturewrites, "The book is a terrific complement to any farm unit as well as an interesting addition to a nonfiction library. It will inspire the early research writer and intrigue the curious city slicker."

Shortly after this series Wolfman published her last book,How and Why Stories for Reader's Theatre (2004). This book includes 40 scripted "pourquoi stories" to read and enact during a Reader's Theatre, designed to be used in classrooms. "Pourquoi" is a French word meaning "why" and explains why things in nature are the way they are. For instance, "Why is the sky blue?" This book is based on these stories and each one stems from a folktale of different countries including Native American legends. According to Angela D. Crockett from theLibrary Media Connection, "This resource is ideal for the teaching professional looking for a new way to present reading." Judy Wolfman appears very successful in implementing her new reading technique.

Not only did Wolfman write many stories, but she also continued to teach on the college level as a professional storyteller, speaking at conferences and different events all over the world.
Judy Wolfman shares her stories at schools, libraries, conferences and even cruise ships. She speaks to all ages and has helped many people develop skills and help them express themselves. She also presents many workshops and teaches classes at three different colleges, York College, McDaniel College and Elizabethtown College. During these classes and workshops she talks about generating story ideas, character and plot development, where to find ideas, creating characters, among many other things. She speaks mainly about the three things she loves, storytelling, creative writing, and the uses of Reader's Theatre. Wolfman also founded the York College Storytelling Troupe, a club at York College for people interested in storytelling.

At the time of this writing, Wolfman is still participating in all of her seminars and is still a professor of storytelling. She also offers a critique service for new writers of children's books. She is a member of many organizations including, the National Education Association, National Storytelling Network (NSN), Society of Children's Book Writers and Illustrators (SCBWI), Penn Writers, Pennsylvania Association of School Retirees, Mid-Atlantic Storytellers, York Tellers and is the co-founder of the Central PA Writer's Consortium. Judy Wolfman was also listed in the 1993, 2006, and 2007 editions ofWho's Who in American Womenand the 2006, 2007, and 2008 editions ofWho's Who in American Education. She is constantly looking for new places to speak and spread her love of storytelling and she never stops thinking of new stories or ways to tell them better. Apart from her experiences educating other people and teaching about storytelling, Judy Wolfman also loves to travel and go on trips with her husband and loves to visit with her four granddaughters. She states that these experiences with her family have been a big inspiration for some of her tales.

Out of all of her loves in life, through work and with family, her favorite thing is seeing how the people she works with really get excited when she starts telling a story. She can tell that she inspired them and loves to see her audience full of excitement and awe.