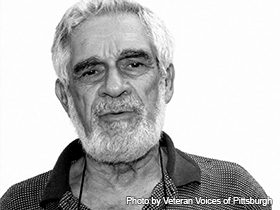 Zolbrod's play, The Early Years, was first produced at the Crawford County Fair in 1977.

Scholar, playwright, and translator Paul G. Zolbrod was born in Pittsburgh in 1932. Following his education he taught for many years at Allegheny College in Meadville, focusing initially on drama and then more intensely on Native American oral culture. He is best known for his translation of the Navajo Creation Story, The Diné Bahaneʼ (1984). He retired from Allegheny College in 1996 to move to New Mexico and become part of the Navajo educational system.

Paul Zolbrod was born in Pittsburgh on December 10, 1932. He was the son of Herman and Caroline Zolbrod. Following high school, Zolbrod served in the U.S. Army from 1953 to 1955 and was stationed in Japan. Returning to the United States he earned his bachelors degree at the University of Pittsburgh in 1958. He was given a fellowship by the National Endowment for the Humanities to study at the University of Caen in France.

Zolbrod began his career in education at Allegheny College in Meadville in 1964. He would progressively move up the academic ranks, eventually serving as department chair beginning in 1979. While at Allegheny, Zolbrod's writing experiences were widely-divergent. His first two books clearly show the influence of the 1960s university culture, Beyond Berkeley (1966)and The Rhetoric of Revolution (1968). As the 1970s began, Zolbrod's attention shifted to the field of drama. He helped to co-edit a volume of essays on the later plays of Shakespeare in 1975.

The next year Zolbrod tried his hand at writing his own play, The Early Years: The Story of the First Fifty Years of Crawford County, Pennsylvania (1977), a work clearly inspired by historical and patriotic fervor of the American Bicentennial. That play would be performed at the Crawford County Fair in 1977. He would also help produce a historical television program for Erie station WQLN in 1978, A Day Before Yesterday: An Oral History for Television.

The next stage of his academic career would take him from away from television and back to writing. He told an interviewer from Contemporary Authors that

As electronic media continue to spread, I become more convinced that print is still the best medium—it is inexpensive, it preserves the integrity of the writer, it encourages the reader to use his or her imagination and intellect, it is portable, and it is durable. After writing for television and participating in video production, my respect for the printed page has grown. I believe that there will always be a place for books, journals, and magazines. Good writing remains the best safeguard against the passive mindlessness that electronic media promote all too readily.

Despite his faith in good writing, his academic interests would turn to oral culture in general and to the Navajos of the American Southwest in particular. He had begun his fascination with Native American culture as early as the 1960s when he had read a volume of stories of the Cheyenne people. Later he began to seek to record and preserve Native American texts, some of whose native languages were passing from use. Using a sabbatical year at the University of New Mexico, Zolbrod decided to focus on the Navajo nation, and began making contacts in the community and attempting to learn the language. What would result years later was his translation of the Navajo Creation Story,The Diné Bahaneʼ (1984), with its tale of the emergence of the ancestors of the Navajo from the inside of the Earth and its explanations of the various features of the Navajo social system. He writes in the preface to the translation that he hopes "that humanists and social scientists might be stimulated to work together to explore" the nature of poetry and language, whether written or unwritten. New York Times' reviewer Jamake Highwater would call the work "a brilliant rendering of a folk epic into a fascinating and highly literate work of art—a tapestry of exceptional events recounted in vivid, strong and highly atmospheric language, a language, to use a phrase of the late John Gardner, that is 'at once ancient and ultramodern.'" Following this work, Zolbrod would continue publishing on the subject of the Navajos.

Upon retiring early from Allegheny College as professor emeritus in 1996, Zolbrod intensified his connection to the Navajo and moved west to New Mexico and began serving as an adjunct instructor at the Crownpoint Campus of the Dine College, the Community College of the Navajos. He taught composition and Navajo language there through the Spring Term of 2005.