The Banana Split: A Rich History 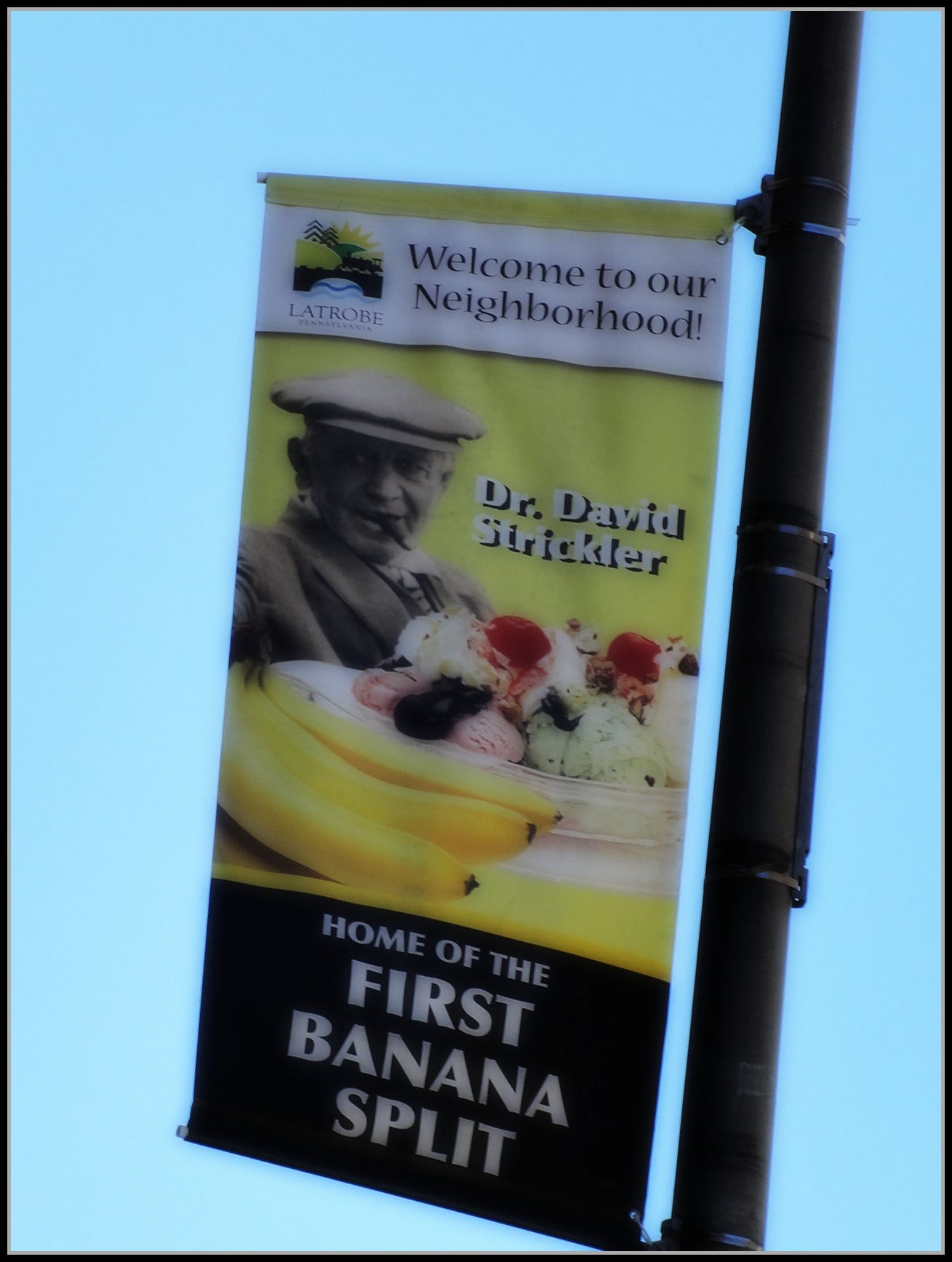 Courtesy of Rob Matheny
Latrobe proudly boasts of being the home of the banana split.

A savory reward on a hot summer’s night and the perfect dessert to share on a date; what gave the banana split such a sweet reputation? This dessert is not just a treat for the tongue, but it also has a rich history topped a fair amount of controversy. The turmoil over who really invented the banana split has gone on for quite some time, but it may never be determined (or accepted, depending on one’s point of view) who invented this delectable treat.

The strongest case for the title of “Home of the Banana Split” belongs to Latrobe, Westmoreland County. Not only has the original letter by Latrobe pharmacy owner and creator David Strickler been uncovered, but the Greensburg Tribune-Review documented the invention as well. In the article, Rachel Smith gives credit for the first banana split to David Stickler who “had sliced a banana in two, added scoops of strawberry, vanilla and chocolate ice cream, three kinds of flavored toppings and whipped cream” in 1904. This ingenuity had allowed for the creation of the delicious dessert, but there was no proper way for it to be served. This prompted Strickler to elicit outside help from a glassmaker in Grapeville who created the first “banana boat” to house his masterpiece.

David Strickler ,a.k.a. Doc Strickler, has been crowned the king of the banana split dessert by Pennsylvanians and Americans alike. Strickler was attending the University of Pittsburgh at the time. Thirty miles from Pittsburgh, Strickler worked as a soda jerk for Tassell Pharmacy at 805 Ligonier Street in Latrobe. During this time, pharmacies also had soda fountains which served floats, sundaes, and different varieties of ice cream.

In the early 1900s, the soda fountain business flourished and was a very popular social spot. The employees (also known as soda jerks) were seen by the public as masters of their craft. The soda jerk’s duties entailed making ice cream and mixing soda drinks. Strickler recalled in an interview with Suzanne Martinson of the Pittsburgh Post-Gazette, “It was a fun job and a great opportunity to meet girls.” As the story goes, one day in 1904, a college student entered Tassell Pharmacy and asked Strickler for something “different.” This twenty three year old entrepreneur had many possible ingredients in front of him; all he had to do was put his imagination to work. Voila! The Banana Split was born! David Strickler continued to work at Tassell Pharmacy for many years. After mastering life as a soda jerk, he eventually bought the Pharmacy. Upon taking ownership, the location was renamed Strickler’s Pharmacy. 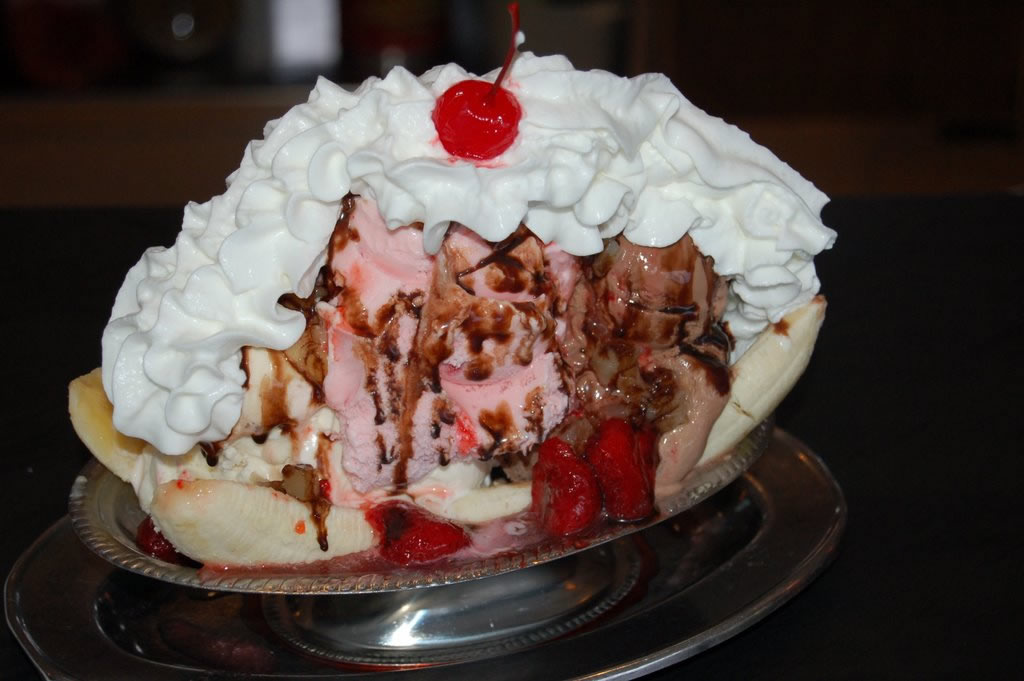 Despite compelling evidence establishing “Doc” Strickler as the creator, both Boston and Wilmington, Ohio continually show up on the radar when discussing the history of the banana split. These cities tried to gain recognition for creating the first banana split very shortly after Strickler had officially created the dessert. The Soda Fountain Magazine wrote an article declaring that the banana split made its first debut at an ice cream convention in Boston. This conference, in Boston, credited Stinson Thomas as the inventor in 1905, one year after Strickler’s documented claim to the dessert. Boston has since ceded the title over to Strickler and does no longer pride itself on being the home of the banana split.

Latrobe has faced dogged competition from Wilmington, Ohio, on the question of the origin of the banana split. This rivalry has persisted for almost a century. Wilmington has not been willing to concede the origin of the banana split, even though Ernest Hazard, “the creator,” proclaimed the birth date of the dessert as 1907. Regardless of any evidence or documents, Wilmington holds fast to the notion that Hazard created the banana split before Strickler. They have continued to host celebrations that proclaim this fact and have adapted an annual Banana Split Festival in its honor. The festival began in June 1997, and they have continued to celebrate it ever since.

Latrobe does not have an annual festival celebrating the sundae, but in 2004, they had a Banana Split Bash. This celebration marked the centennial of the banana split. The Bash was held in a park and the festivities included a day of live music and, of course, banana splits. The University of Pittsburgh also celebrated their famous alumnus on this day by distributing the dessert across campus at an event called “From Pitt Came the Split.”

Valley Dairy restaurant chain president Joseph “Ice Cream Joe” Greubel notes that the National Ice Cream Retailers Association has declared that Latrobe is the birthplace of the banana split. It should be noted, however, that the Valley Dairy chain is located in Westmoreland County.

A traditional Doc Strickler banana split is composed of a single banana split in half lengthwise with each half strategically placed on opposing sides of the dish. Scoops of chocolate, vanilla, and strawberry ice cream are placed between the banana slices. The ice cream is then covered with chocolate syrup, whipped cream, nuts, and a cherry on top. If the bananas are cut crosswise, the dish would then be a “banana royale.”

The Boston version of the banana split has many modifications with its preparation when compared to Strickler’s version. The Boston recipe is composed of only vanilla ice cream and only two scoops of ice cream (instead of three). Cherries were placed on top of both scoops of ice cream and peaches were used as dividers between the scoops. Pistachios and crushed walnuts were also used to top off this version of the sundae.

Wilmington had a version that differed slightly from the original Latrobe recipe as well. Although the Wilmington version used three scoops of ice cream as Strickler did, the variations of ice cream flavors were not documented. This version also included crushed pineapple as a topping, which is not part of Strickler’s original design. As time has passed, “traditional” banana splits have come to include chocolate, strawberry, and pineapple sauces. Wilmington splits, however, also can include caramel sauce.

When Doc Strickler premiered the split, it was only a whopping ten cents! While this may sound like a bargain in today’s economy, at the time it was actually quite expensive and was double the price of other sundaes. Students from nearby Saint Vincent College were credited in spreading awareness of the banana split across the globe. The college even hosted a make your own banana split buffet on special occasions such as parents’ weekend and the beginning of school. When the students traveled to their hometowns on vacation, they shared the new creation with family and friends, increasing its popularity nationally and making the banana split a new favorite everywhere. And a favorite it has remained for over a century.