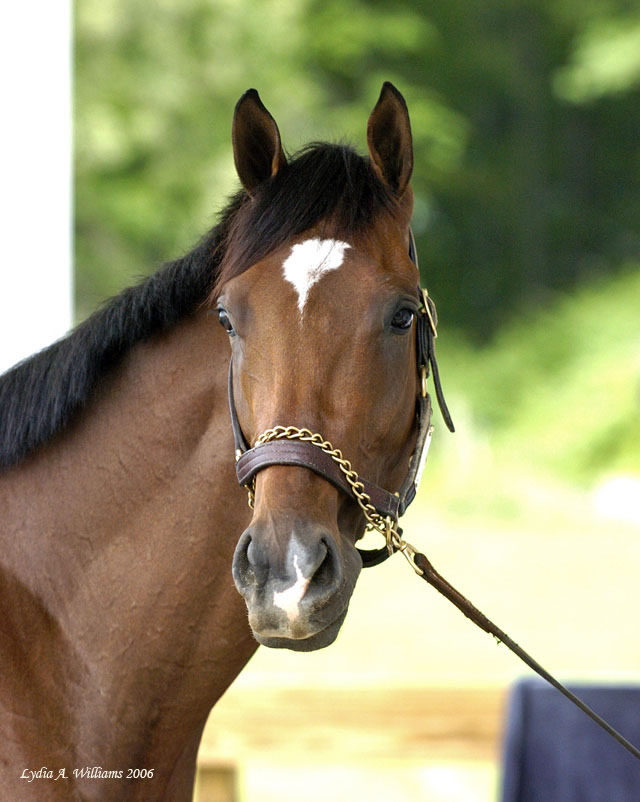 It was a gorgeous day at Pimlico Racecourse for the Preakness Stakes, and the crowd was cheering for the expected Triple Crown Winner, Barbaro. After a false start at the gate, Barbaro and his jockey, Edgar Prado, went back to the gate and were ready to run their hearts out. The gun went off, the gates opened, and the horses began to gallop down the track. However, this day was not like the day of the Kentucky Derby, and not everything went smoothly this time. Within seconds of leaving the gate, the crowd went silent as Prado quickly dismounted Barbaro. "During the race, he took a bad step and I can't really tell you what happened," Prado said. "I heard a noise about 100 yards into the race and pulled him right up." This noise was the shattering of 20 bones in Barbaro's right hind leg.

Barbaro's tale began on April 29, 2003, when he was foaled at Sanborn Chase Farm, in Kentucky, by Dynaformer, his sire, and La Ville Rouge, his dam. He was then bought by Gretchen and Roy Jackson, who own Lael Stables in West Grove, Pennsylvania, near Philadelphia. Bought as a racehorse, Barbaro went to train with well-known trainer, Michael Matz. From the beginning, Matz saw the potential that Barbaro had to race. "He's obviously a very talented horse," Michael Matz said. "Whether he carries the class he shows on turf over to the dirt, we just don't know yet." Between 2005 and 2006, Barbaro ran three out of his six races on turf and the other three on dirt, coming out of all of them undefeated. 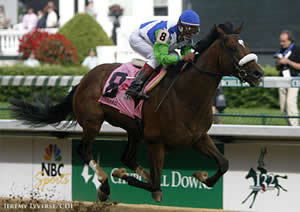 Barbaro's greatest challenge would be the Kentucky Derby. On May 6, 2006, he entered the Run for the Roses as the second favorite. This usually challenging race was no match for the heart filled three-year old. Jockey Edgar Prado did not even have to urge him on to finish the race. They came in first by six and a half lengths, the largest margin since Assault's eight lengths 60 years before. Barbaro also set some other amazing precedents. He was the first horse in the Kentucky Derby to win after having a five-week layoff before the race, and he was only one of six undefeated horses to ever win the Derby. This Kentucky Derby win was the first out of seven tries for Edgar Prado, and the first attempt and win, for trainer Michael Matz.

After the Derby, there was plenty of speculation that Barbaro could easily be the first horse to win the Triple Crown since Affirmed, in 1978. He began training at Matz's Fair Hill Training Center in Maryland, before returning for the Preakness Stakes. If he could then win the Preakness, he would go onto race in the "Test of Champions" at the Belmont Stakes.

On Saturday, May 20, 2006, Barbaro entered the grounds at Pimlico Racecourse for the Preakness. Due to the horse's being a little high-strung, trainer Matz saddled and walked Barbaro around the paddocks before the race began. After a false start in the gate, Barbaro was looked over by health examiners, and led back into the gate. At the sound of the gun, Barbaro was, as usual, at the front of the runners, but not for long. Within a hundred yards, Prado had pulled him up and dismounted, the crowd grew unusually quiet, and instead of Barbaro, Bernardini crossed the finish line as the winner. 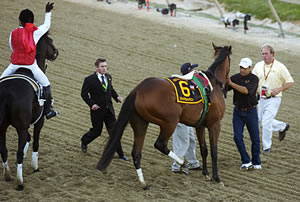 Still on the track, Barbaro had broken his cannon bone above his ankle, his sesamoid bone behind his ankle, his fetlock below his ankle, and had fractured his pastern. His ankle was dangling and he couldn't walk. Most horses on the racetrack are put down right away after an accident that extreme, but Barbaro was taken by ambulance to New Bolton Medical Center at the University of Pennsylvania, where he was cared for by Dr. Dean Richardson, head of surgery.

Once arriving at New Bolton, Barbaro was given anesthesia and taken into surgery. Dr. Richards had never performed a surgery on an area with as much damage as Barbaro had suffered, but was cautiously optimistic about the outcome. A seven-person surgical- team operated on Barbaro, using the latest veterinary advances possible. By placing an LCP, a locking compression plate, or stainless steel bar with screws onto the broken bones, the team was able to stabilize the bone and allow Barbaro to stand and hold some weight. This operation was deemed successful and for a few months, things were looking up for Barbaro.

The operation had been a success, but then other complications arose. The Derby winner developed an abscess in his left hind leg and later, laminitis in his front legs. Laminitis is a disease that develops in a horse's hoof, most times from too much pressure. In Barbaro's case, it developed since he had been placing so much weight on his front legs due to his injury in his hind leg. Laminitis is very painful for horses and not easily cured, and what eventually led to Barbaro's death. According to Dr. Richardson, Barbaro had developed one of the worst cases ever of laminitis. "If another horse came in tomorrow with the same fractures, I think I'd have a better chance of saving his life," he said. "I know I made mistakes. You expect to get better at what you do."

After arriving at New Bolton, Barbaro had become "America's Horse." People across the country kept up with his recovery and were cheering for him to get better. Thousands of 'Get Well' cards appeared on his stall door at the clinic, as well as flowers and presents. Reporters and newspapers covered his story almost on a daily basis, keeping America up to speed on "their" horse's recovery. On January 29, 2007, Barbaro, "America's Horse", and the Kentucky Derby winner who had been through so much, was euthanized. People across the country mourned with Barbaro's owners, and wished for a different outcome. He had survived a catastrophic event on the racetrack, but nature's course was too powerful for this little horse. Even though Barbaro may be gone, his spirit lives on in so many ways.

His stay at the New Bolton medical center, in Kennett Square, Chester County, had a huge impact on the world of medicine. His greatest impact was the light he cast on laminitis and the research on how to prevent it, leading to a new Laminitis research center at New Bolton. The Barbaro Fund, which has raised $1.2 million, supports ongoing patient medical care and the expansion of the George D. Widener Large Animal Hospital. 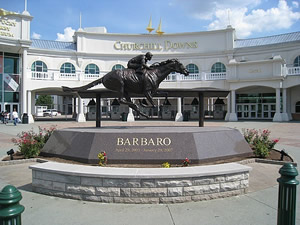 While Barbaro's racing career was short lived, he will always be remembered as "America's Horse." On April 26, 2009, Barbaro's ashes were buried outside Gate 1, near the Kentucky Derby Museum. Marking his resting place is a bronze statue of Barbaro in the 2006 Derby by sculptor Alexa King. Though Barbaro will race no more, he will be eternally running outside Churchill Downs.