Believe or Not: Can't Doubt the Spirit of New Hope 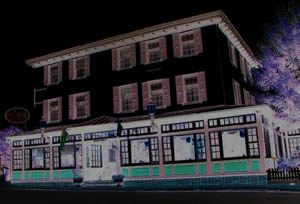 Chris Poh, American Public House Review
New Hope, Bucks County has been acclaimed one of the most haunted towns in America.

In a town where English Mincemeat, Ukrainian Rose Petal, Jewish Malaga, and Ancient Roma Ambrosia are the ice cream flavors that reign supreme, it is not hard to imagine a cultivated, quirky environment. Yet, Robert Gerenser’s Exotic Ice Cream shop is neither the only nor the most extreme oddity in what was deemed “America’s Most Haunted Town” by director Robert Child.

Ghosts, paranormal activity, poltergeists, spirits—whatever you may call it, there is no doubt that something out of the ordinary is going on in New Hope, Bucks County. There are many ways to describe the small town located along the Delaware River. Some may refer to it as a quaint, liberal community that is home to many artists and musicians. Others may recall its deep history with roots leading back to the Revolutionary War—some buildings today still boast that George Washington himself spent time there. However, author Katherine Ramsland describes New Hope as “a ghost-filled town if there ever was one.”

The territory of New Hope originally belonged to the Lenni-Lenape, was then “claimed” by King Charles II of England and, afterwards, was given to William Penn in the seventeenth century. Though the land changed hands several times, the town was officially founded in 1722 by John Wells, who established as a ferry to shuttle travelers along their journeys from New York to Philadelphia and vice versa. Later, productive mills were built in the area and it soon became a popular vacation spot for the public from the metropolitan areas nearby. 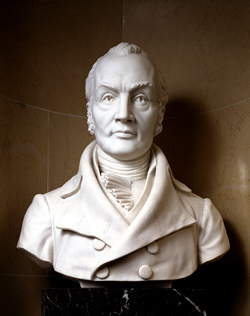 Just around the corner, on a cold night in 1776, George Washington led his troops across the icy Delaware River to fight the Hessians. General Washington then went on to lead his men, in 1778, through New Hope on their way to their winter encampment in Valley Forge. Soon after, taverns and inns were constructed to take in fatigued travelers. The picturesque scenery further lured these voyagers to visit and inhabit New Hope on a more permanent basis. Due to the increased commerce around the area and the building of the Delaware Canal, New Hope grew and attracted residents and visitors alike.

New Hope was incorporated in 1837 by Benjamin Parry, the major contributor to the town’s extremely prosperous period from the late eighteenth century to the early nineteenth century. Parry also played a large role in the building of the first bridge from New Hope to New Jersey and in instituting the first bank in the city.

Parry set the tone for New Hope’s successful record, which many locals soon followed. The area’s Bucks County Playhouse, constructed in 1790 and renovated in 1939, has even boasted Grace Kelly, Robert Redford, Walter Matthau, Bea Arthur, Liza Minnelli, and John Lithgow as stars of its productions. However, some of the most famous attractions of the town are the inhabitants who have refused to leave. In fact, author P.D. Cacek believed that ghosts are “part and parcel of what New Hope is…you come here and you feel it immediately.”

Joseph Pickett, a native of New Hope, made his living as an artist at the end of the nineteenth century in his small studio on Mechanic Street. Today his painting, “Manchester Valley” hangs in New York City’s Museum of Modern Art.  Pickett gained recognition long after his death in 1918 and there is a piece of him that continues to manifest itself throughout his home and studio. It is not his belongings or any pieces of artwork that he left behind. Betty Hoffman, a resident of the home in the 1940’s described actually seeing a man, “sitting on her bed…He wore dark trousers and a deep – toned shirt open at the neck. His hair was iron grey and he had a grey moustache. He said nothing…’eventually it dawned on me…I had seen Joseph Pickett!’” Betty, taken aback by this unannounced visitor, grabbed at once for her children but when she looked back towards the bed the strange man was gone. 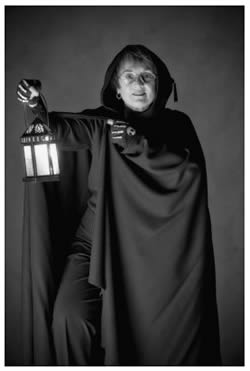 Ghost Tours of New Hope
Tour guides wait to lead the curious through the ghostly parts of New Hope.

Ms. Hoffman’s tales are not the only of the odd happenings at Joseph Pickett’s home. Other residents have told stories of hearing footsteps in empty rooms, feeling a cool breeze when outside it is calm, finding writings in chalk on the walls, and being unable to keep the door to Pickett’s room open.

Adele Gamble, who leads tours around historic New Hope, even declares that Joseph Pickett decided to follow her on one of her journeys. She maintains that one cold November day, while directing a group around town, two women approached her and exclaimed, “we wanted you to see the man standing behind you, [he was] tall, handlebar moustache, black pants, suspenders and a white shirt…we thought it was really odd…he didn’t have a coat on.” Gamble avers to this day that the man these women saw was indeed Joseph Pickett.

While Joseph Pickett may be the hometown ghost in New Hope, Aaron Burr, by comparison, is the most famous. Burr, one time Vice President of the United States, is known for many things, most notably his now infamous duel with Alexander Hamilton. Yet, many may not be aware of the fact that after this legendary battle between two American public figures Burr fled to New Hope. Today, the Aaron Burr House has erected a striking inn from the residence where Burr sought solitude during this trying time. Rumor has it that he hid in these quarters for almost a week. According to Bucks County Town and Country Living magazine, “Some say that Burr’s ghost still seeks refuge there. We’ve had people say they feel someone staring at them from behind. Called Burr’s sightless stare, this sensation has occurred in various places throughout the house. Mostly it happens on the second floor and in the stairwell down to the basement.”

While there is no questioning the odd happenings throughout the town, Susan C. Eaton of the New Hope Historical Society states that, “without question the most haunted place in New Hope is The Logan Inn.” What was once called The Ferry Tavern, built in 1727 by town founder John Wells, it was renamed the Logan Inn in honor of Chief Logan of the Lenni-Lenape tribe in 1828. Today it still serves as the oldest running establishment in the area. Near the entrance, a statue of the great Native American chief continues to watch over the institution today.

Nevertheless, it is not Chief Logan or John Wells who keeps the visitors on their toes during their stay at the Logan Inn. There are currently several spirits who have been documented to frequent the dwelling, which has been referred to as one of the most genuinely haunted structures in the nation. 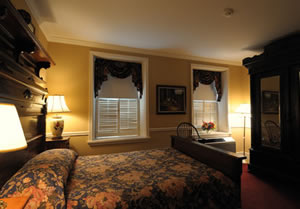 The Logan Inn
Room Six of the Logan Inn, home to the spirit of little Emily Lutz.

The most striking may be found in room number six of the building. Gwen R. Davis, innkeeper of the Logan from 1987-2001, recalls that room six “has an extraordinary history… [It is] the coldest room in the house, which it shouldn’t be…it’s a sunny room… [there is] no explaining.” One explanation for this odd situation is the presence of Emily Lutz. Emily was related to a previous owner of the Logan Inn and, according to Ramsland, perished in the building itself. She continues to make her existence known by shuffling items around on the dresser and opening and closing doors at will. Emily, though, is not alone. Adele Gamble, a resident of New Hope, has said of her time in room six, “There was a man who looked as solid as any person, and a woman who was transparent, and the child was really transparent. I asked them why they were there and they said, ‘We’re just travelers. We were just passing through.’”

As visitors of The Logan Inn enjoy the many amenities the lodging provides, many have stopped to comment on the sweet smell of lavender perfume in the air. Oddly, it seems to come from the same corner of the foyer in which a portrait of the elder Mr. and Mrs. Lutz (Emily’s parents) currently stands, protected by a velvet rope. Carl Lutz, relative and former owner of the Inn even commented that he has, on several instances, smelled the scent that he identified as uniquely belonging to his grandmother.

Mr. Lutz has also recounted numerous peculiar occasions of light bulbs becoming unscrewed, chains making loud sounds in the basement, and other inexplicable phenomenon as daily occurrences at the Logan Inn. Perhaps they are the work of a Revolutionary War soldier who is said to roam the halls. Ms. Davis explains, “During the Revolutionary War, they stored the bodies under the kitchen, some were cremated and it’s thought that one of the soldiers, who wasn’t dead, was cremated.” 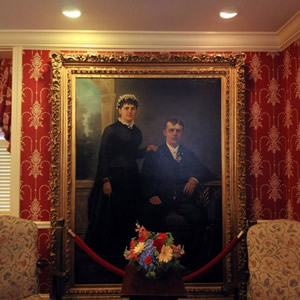 The Logan Inn
Emily Lutz's parents are depicted in this painting; the area also smells mysteriously of lavender.

While mysterious episodes like these may be enough to scare some away, Carl Lutz asserts that these events do not disturb him, the staff, or the visitors of the Inn. Instead, he states, “None of us feels unhappy because of these presences here. We feel comfortable with them and think they are comfortable with us. We all agree they are friendly and want to look after us. They’ll always be welcome.”

There have been many speculations as to why many believe New Hope has attracted members of the supernatural. Charles J. Adams III, author of Bucks County Ghost Stories, purports that New Hope is the ideal place for a spirit because of its deep roots as a junction of trade. He attributes the building of early roads, canals, as well as the presence of early settlers as laying the foundation for human conflict and drama in the town. This struggle, combining with the nearby fighting of the Revolutionary War, created a place of intense energy in which conflicted presences often reside. He credits this groundwork as to why New Hope has become, what he calls, “the most haunted place in Pennsylvania, if not the United States, if not the world.”

If you choose to investigate witness instances like these firsthand, you will not be the only one searching in New Hope. Currently, formal ghost tours take place so that interested visitors may formulate their own opinions about the out-of-the-ordinary town. The outings are run by The Ghost Tours of New Hope Company, which was founded by author Adi – Kent Thomas Jeffery some 25 years ago. The program currently runs one tour per week, occurring Saturday nights at 8 p.m., from June through November, departing from Main Street in the center of New Hope.

There is no question that New Hope, Pennsylvania is an area rich in history and culture. Located about 30 miles from Philadelphia and about 70 miles from New York City, this small town has been frequented since the Revolutionary War. Its picturesque scenery and charming shops are, today, enough to attract visitors from around the world. Yet there is no doubt that the eerie and unexplained phenomena have a pull just as strong. There is no way for us to truly validate or disprove any of the New Hope tales of apparitions or ghosts. There is one thing that is definite, though, you cannot doubt the fact that there is plenty of spirit in this town.