Best and Brightest: The Robot Hall of Fame

Participants from around the world gathered at Carnegie Mellon University to take part in the First Robocup American Open. Over 150 researchers competed in various robotics competitions to show-off their engineering skills and demonstrate the advancing of robotics technology. The theme of the competition is soccer. Two teams of five robots created by researchers are pitted against each other in a match. The robots are placed in a green carpeted soccer field with an orange soccer ball and are expected to maneuver around to score goals against the other team. But before the competition began there was a special announcement.

On April 30, 2003, at the Opening Gala Celebration for the First Robocup American Open, it was announced that the Robot Hall of Fame would be created. The announcement was made by the former Dean of the School of Computer Science at Carnegie Mellon University, James H. Morris, who wanted to recognize the achievements of artificial intelligence and to “call attention to the increasing contributions from robots to human society.”

The Robot Hall of Fame honors both real robots and robots from science fiction. Both have helped in creating breakthroughs and in inspiring us to seek greater accomplishments in the field of robotics. The encompassing criterion for being honored as an actual robot is that it has to function autonomously. In addition, the robot needs to exhibit a unique skill and function that is useful or potentially useful. The function may be for space exploration, medical purposes, or simple entertainment. Regardless of its function, the robot needs to be able to use its skills to validate its creation. The da Vinci Medical Robot System, for example, was made to perform less invasive surgical procedures. If it did not perform its tasks in the way it was built for, it would not have been enshrined. For a robot from science fiction to be honored, it needs to touch the world’s imagination and inspire the creation of real robots. 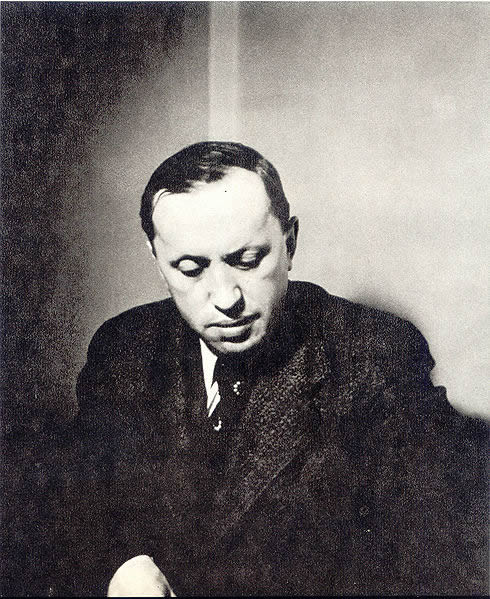 As Carnegie Mellon University puts it: “The Robot Hall of Fame recognizes excellence in robotics technology worldwide and honors the fictional and real robots that have inspired and made breakthrough accomplishments in robotics.” Carnegie Mellon University gathers a panel of experts in the field of robotics to choose the robots that are worthy of being in the Hall of Fame. These experts are designers, researchers, writers, scholars and entrepreneurs. Once the final inductees are chosen, an honorary induction ceremony is held by the Carnegie Mellon University’s School of Computer Science. “We favored robots that had achieved ‘firsts’ or had affected our thinking deeply,” said James H. Morris regarding choosing inductees. “Our goal is to create a permanent, interactive exhibition involving robots that will educate and entertain a wide variety of audiences.”

The term robot either comes from the Czech word robota, meaning “labor” or the Polish word robotnik, meaning “workman.” The word was first introduced in Karel Čapek’s 1923 play R.U.R. (Rossum’s Universal Robots). In the play, there is a factory that builds humanlike machines that are called “robots.” Creator of the Three Laws of Robotics, Isaac Asimov, said that “Čapek’s play is, in my own opinion, a terribly bad one, but it is immortal for that one word. It contributed the word ‘robot’ not only to English but, through English, to all the languages in which science fiction is now written.”

Čapek used the words meaning “labor” or “workman” because the machines in his play worked for humans. Today, robots still serve humans. The first working robot, Unimate, was developed by engineer, Joseph F. Engelberger, to help with tasks that were disliked by workers. It did tasks such as extracting castings and spot welding in automobile factories. Unimate was commercial successful and saved money for the company by replacing people. For his work, Engelberger is called the “Father of Robotics” and Unimate has been inducted into the Robot Hall of Fame. Robots also exist to entertain. There are many robotic toys for kids, ranging from RoboSapien, a humanoid robot, to Bugbots, robotic bugs. 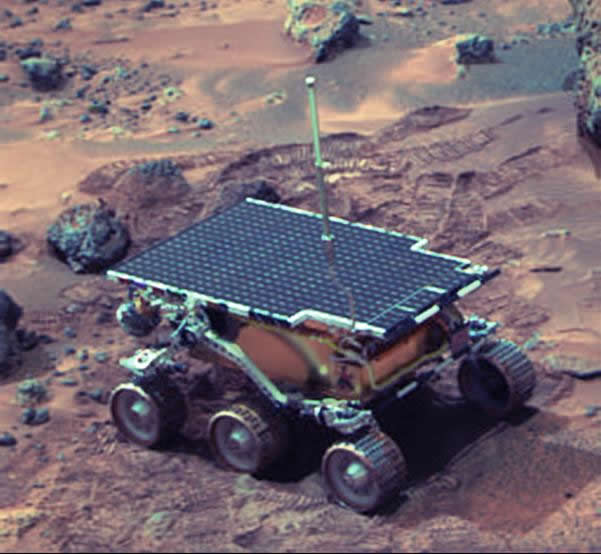 NASA / Jet Propulson Laboratory
NASA's Sojourner earned its place in the Hall through its resilience under difficult environmental conditions and for the information it relayed back to Earth.

One of the first real robots that were inducted when the Robot Hall of Fame debuted was the Mars rover, Sojourner. It was part of the 1997 Pathfinder mission that brought back a wealth of knowledge about the Martian surface. It was the first rover to land on Mars after two previously failed missions. Sojourner project manager, Dr. Jacob Matijevic, stated, “Sojourner’s durability in this frigid, hostile environment is also showing us that we are on the right track to building smarter, even more durable rovers for future missions.” Sojourner’s main objective was to analyze the chemical composition of Martian rocks and soil using an Alpha Proton X-ray Spectrometer. Scientist learned that many of the rocks on Mars were created as the result of volcanic activity. Due to the shape of some of them, scientists can infer that there was once flooding on Mars.

It had sent a total of five hundred and fifty pictures back to Earth and sent back the chemical compositions of fifteen Martian rocks. “The data returned by the Sagan Memorial Station and Sojourner has been nothing short of spectacular, and it will help provide a scientific basis for future Mars missions, including a sample return, for years to come,” according to  Dr. Wesley Huntress, NASA associate administrator for space science. When the summer season ended on Mars after eighty-three days, it finally stopped its research when its batteries wore out. The successes of Sojourner led to the creation of Spirit and Opportunity. These two rovers are on Mars in an ongoing mission that began in 2004. The next year a more sophisticated robot that further showcases the advances of technology was inducted into the Hall of Fame. 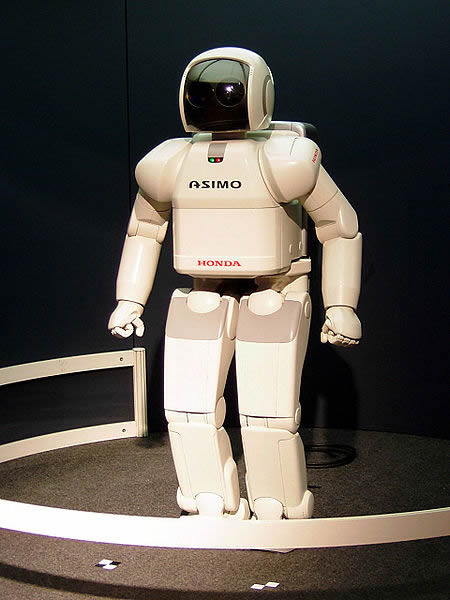 Gusin - Wikimedia
Honda's Asimo has made advances in mechanical mobility with many yet-to-be-discovered ramifications.

“ASIMO is a robot that captures the imagination, intrigues the intellect and stimulates people to dream the future by seeing the possibilities of today,” said Jeffrey A. Smith, ASIMO North American Project Leader from American Honda Motor Co., Inc. “Honda is honored that the Robot Hall of Fame has chosen to recognize ASIMO among society’s most historically significant robots.” Advanced Step in Innovative Mobility, or ASIMO, is a robot that was designed by Honda and is one of the most advanced humanoid robots. It takes twenty-four motors to operate and took twenty years to develop. It has the ability to perform many tasks that humans can. ASIMO can walk, balance on one leg, and use its hands to carry objects. One impressive trait is that the cameras it uses for eyes have the ability to record faces in its database so it can recognize people. More advanced humanoid robots are being design based on ASIMO. In the future, those robots will be able to help humans is many ways. They might be able to help as cleaners, receptionists, or even security guards.

Robots like Sojourner and ASIMO would not exist without imagination. Before these real robots came to be, science fiction delivered a bevy of robotic characters that helped stir the minds of engineers to help them think of ideas for their own creations. Inspiration from the Star Wars character, C-3PO, can clearly be seen in the development of ASIMO. In the future, when the final ASIMO is complete, it may be fully sentient and humanlike bipedal like the Star Trek character, Data. 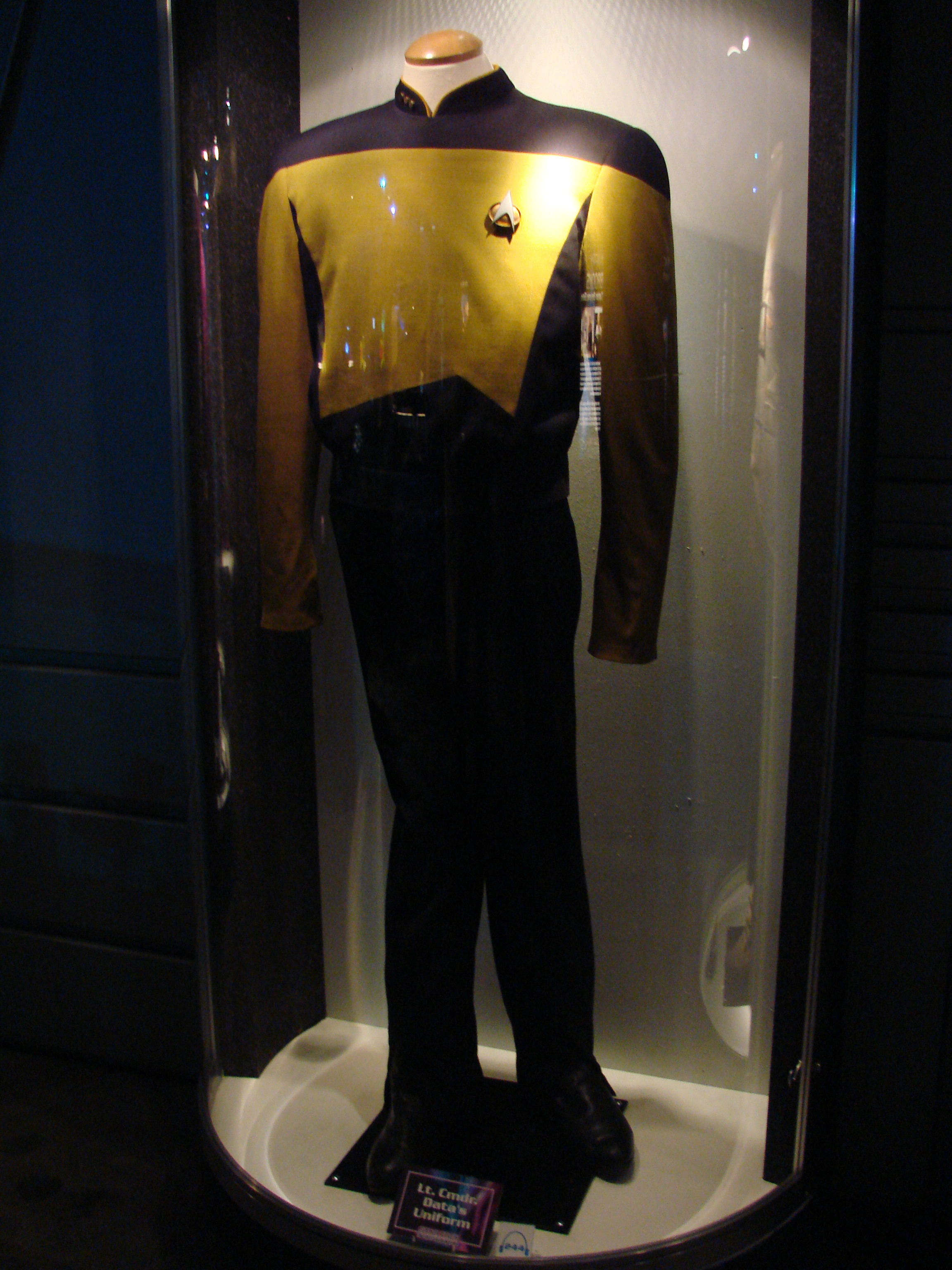 Usually there is a mix of real and fictional robots inducted into the Robot Hall of Fame every year. But in 2008, Data was the only fictional robot inducted. Data is a Lieutenant Commander on the USS Enterprise of Star Trek. He lacks emotions and is often confused by emotion driven behavior. He is also highly intelligent and philosophical. According to a juror for the Robot Hall of Fame, Ray Jarvis, “Data played a pivotal role on questions of robot ‘right to life’ matters and human/machine philosophies.” Another juror, Anne Balsamo further explained that, “In one episode [The Measure of a Man], Data is put on trial to determine whether he has the right to refuse to submit to a procedure that would disassemble him. During the trial, it is determined that Data is not ‘property,’ like a computer or a toaster, but rather a sentient life form entitled to rights of self-determination.” Data was an anthropomorphic robot that functioned only on logic and reasoning, but not all humanoid robots function like him. Some of them even have emotions in the realm of science fiction. 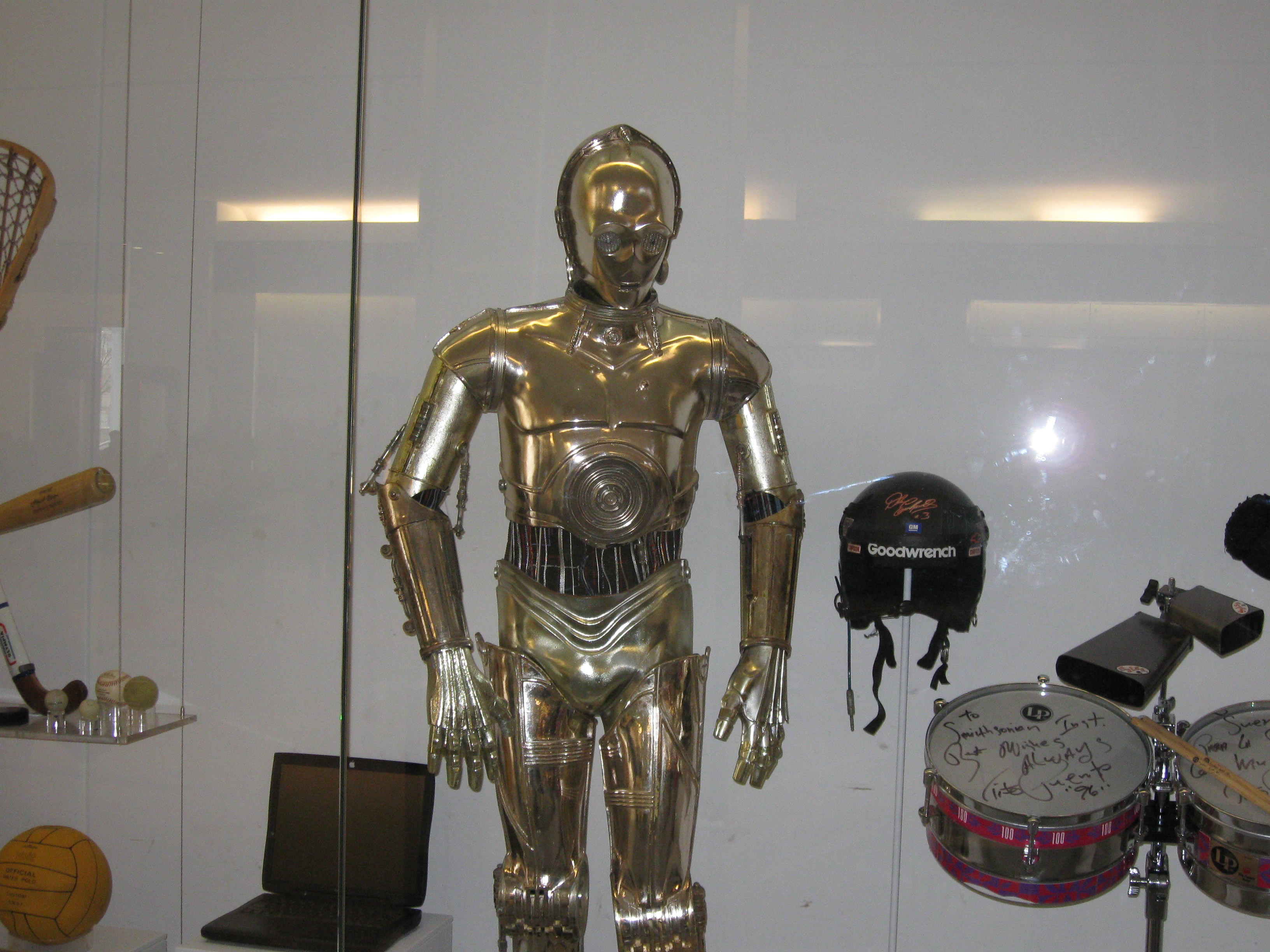 Perhaps the most popular and well-known robot in the Hall of Fame is C-3PO of Star Wars. He was in all six of the Star Wars films and played an integral part in connecting the rest of the characters together. The reason C-3PO was inducted into the Robot Hall of Fame in 2004 was because he was worrisome and pessimistic. In Star Wars Tech, Jeanne Cavelos, an astrophysicist, said, “One area that I think Star Wars was a real breakthrough, was with the treatment of the droids, the fact that the droids had personalities and emotions.” He would often quarrel with his counterpart and fellow inductee, R2-D2, about the whereabouts of their friends. C-3PO has inspired scientists to develop actual robots that display emotions. An example of one of these robots is Kismet. MIT Media Lab created Kismet to replicate human emotions. It uses sensors to read the face of the person interacting with it, then uses a series of motors and gears to adjust the face into the appropriate emotional response. If spoken to, Kismet will give a verbal response.

Moore’s Law states that the number of transistors on a chip will double about every two years. With that exponential growth, robotics technology should advance farther than ever imagined. In the future, people will have to adjust to a world where we live together with robots. It may start out like the movie, I, Robot, where people buy robots to serve in their homes. Then it could turn for the worst so that humans end up serving robots like in the Matrix. The brilliance of robotics technology is displayed through all of the inductees of the Robot Hall of Fame. Real robots show how far technology has come and fictional robots inspire scientists and engineers to develop the real robots. As long as the robots continue to stimulate the human imagination, the Robot Hall of Fame will have many great new members for years to come.

The Center wishes to thank: Mike Smith, 200x at Flickr.com
and
the Carnegie Mellon University School of Computer Science
and
its Robot Hall of Fame for their assistance in illustrating this article.