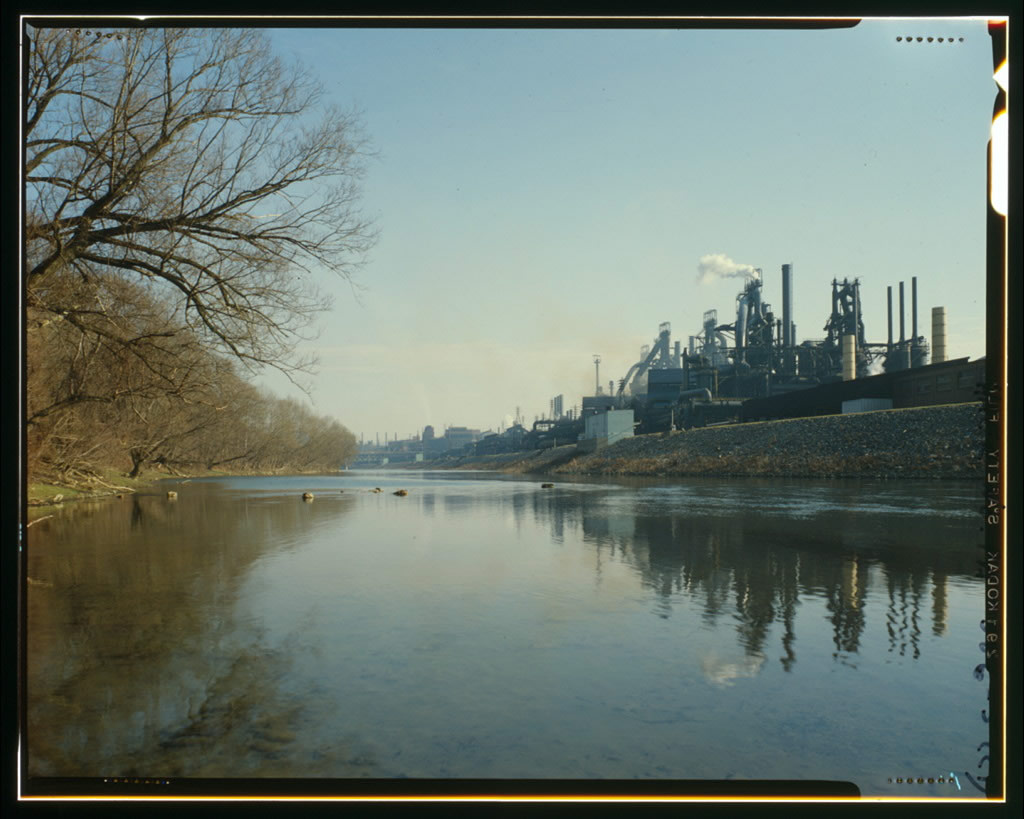 By the time Eugene Grace, President of the Bethlehem Steel Corporation, retired in 1957, the company had become the number two steel-producer in the nation, meeting the country’s metal production needs, employing generations of family members, and becoming a major supplier in both World Wars. This corporation, located in Bethlehem, Northampton County, thrived for one hundred and forty years before being shutdown in 1995. Bethlehem Steel has become a symbol of the city of Bethlehem, and the impact it has made on the rest of the country is legendary. Without Bethlehem Steel, eighty percent of New York’s skyscrapers, as well as the Ben Franklin, George Washington, and Golden Gate bridges would not exist. The incredible impact this corporation has had on the United States has earned it the reputation of “one of the most powerful symbols” of American manufacturing.

The idea of building an iron company in Bethlehem was first pitched in 1857 by Augustus Wolle, who created The Saucona Iron Company. By 1861 and the outbreak of the Civil War, there was a high demand for railroad equipment so engineering genius John Fritz was hired to help produce the first iron railroad rails. When Fritz joined the recently formed company, he brought his patent for the “three-high rail mill.” The Saucona Iron Company was established in South Bethlehem because it was at the junction of the North PA and Lehigh Valley Railroads, a strategic location for the launching of the new iron company. 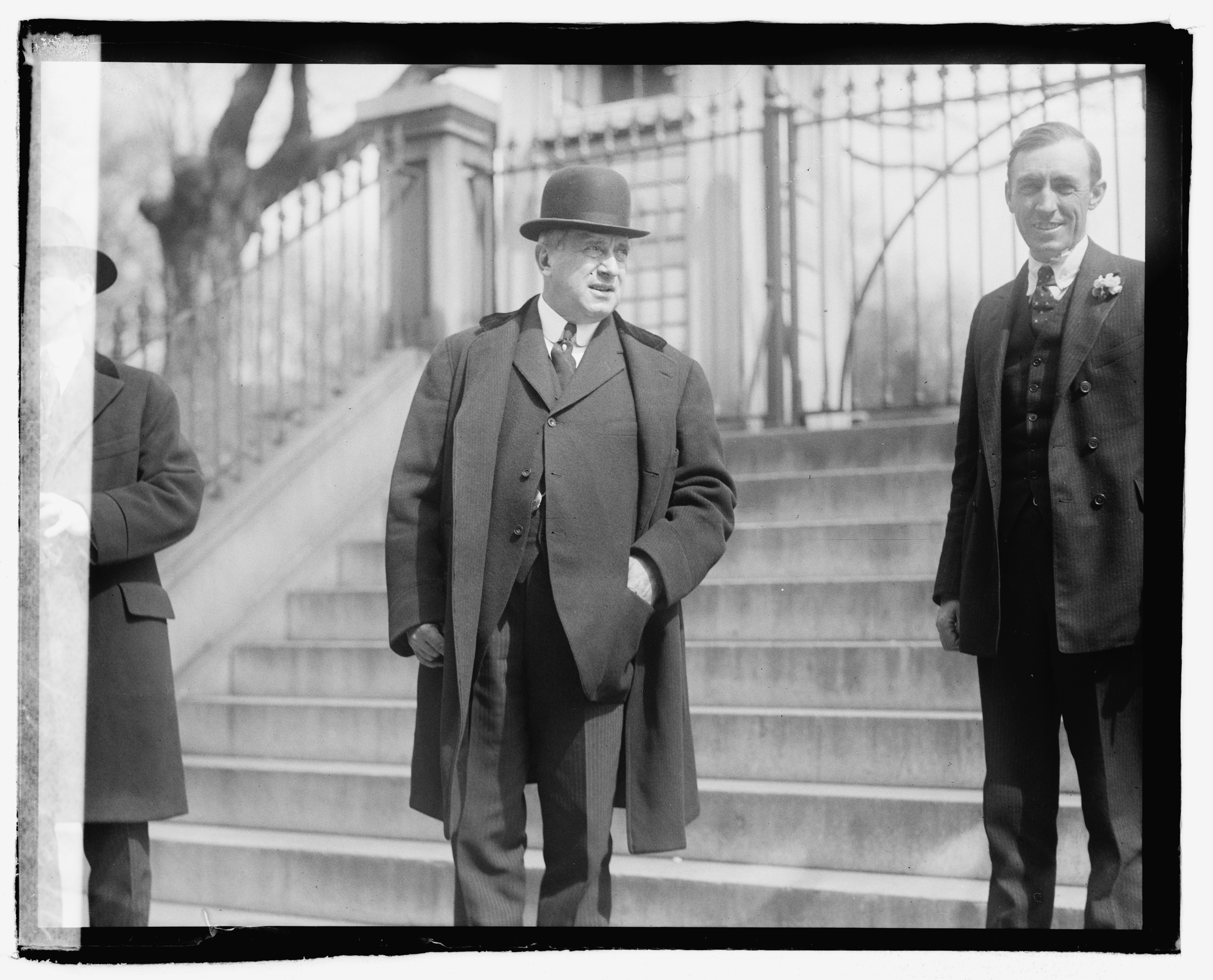 Library of Congress
Charles Schwab, first president of the Bethlehem Steel company, is seen here leaving the White House in 1920.

The iron company was a huge success in the railroad business and renamed itself “the Bethlehem Iron Company.” When the British began to mass-produce a product that was harder and more durable than iron, the Bethlehem Iron Company followed suit and started to pump out this new creation—steel. The corporation set the standard for the steel making industry by being the first to use the Bessemer Process, which elevated steel manufacturing to a new level within the United States. The Bessemer process included turning molten pig iron into steel, which was 16 times more durable. Before Bethlehem Steel manufactured with the Bessemer process in 1873, companies could only produce the less resilient iron railroad rails. The sturdier steel rails allowed for the transportation of coal, war supplies, and other steel products throughout the country.

In 1903, Charles Schwab, President of the United States Steel Corporation, left that company due to personality conflicts and was hired as the first President of the renamed Bethlehem Steel Corporation. Schwab was instrumental to the early success of the corporation His often ruthless tactics allowed him to take the company full scale through mass employment. In 1907, Bethlehem Steel was once again on the forefront of manufacturing by being the first to adopt Henry Grey’s mill rolling process. This process assisted the plant in producing H-section steel beams that were lighter, wider and cheaper than traditional beams. These revolutionary beams allowed for taller skyscrapers and longer bridges to be built. By 1913, Bethlehem Steel made it possible to build high rise buildings, now a staple of many city skylines. 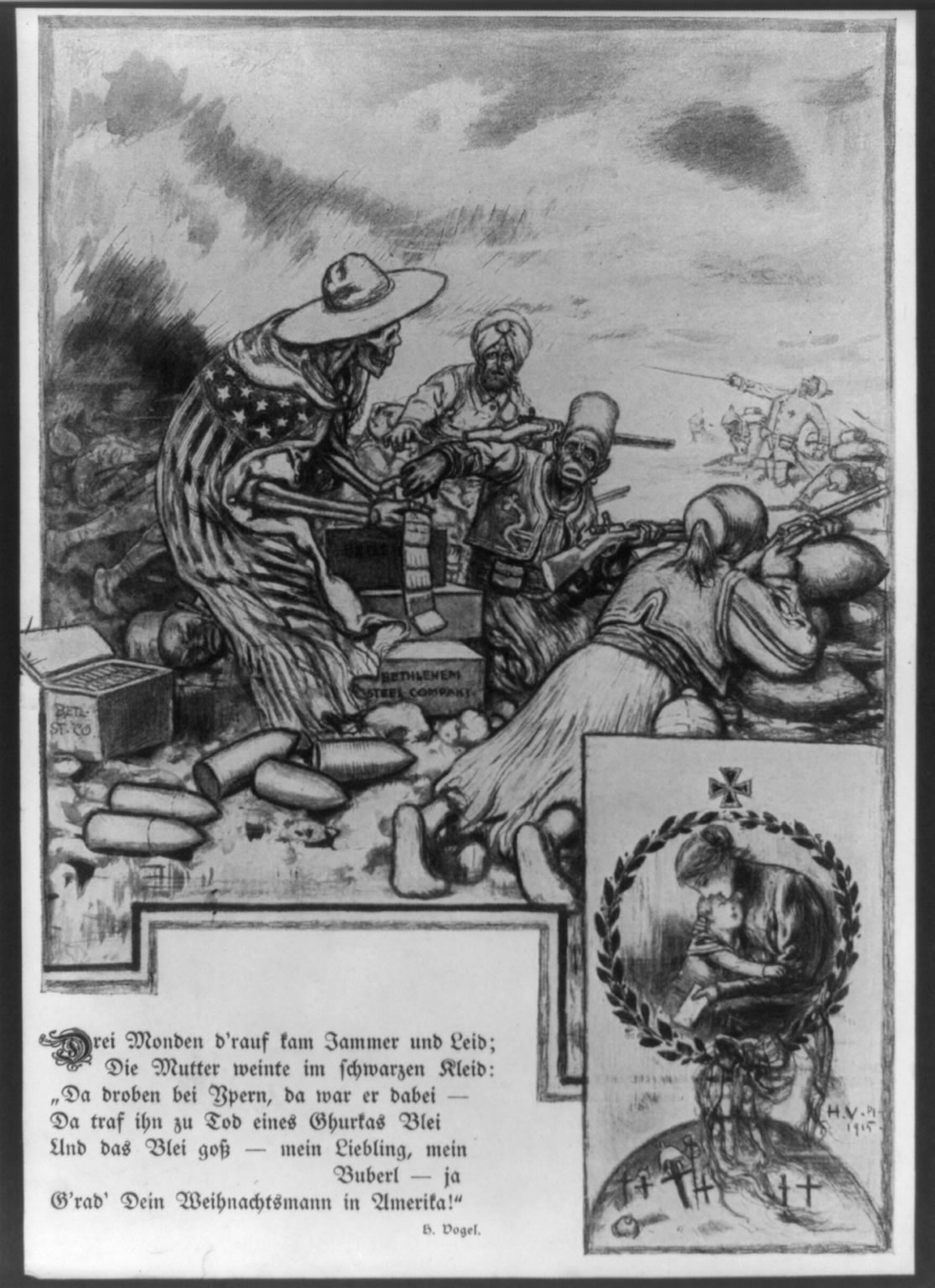 Library of Congress
Highly esteemed in the US, Bethlehem Steel's production of munitions is attacked in this German propaganda broadsheet from World War I.

In 1916, Eugene Grace took over for Schwab as president of the corporation and led it through the most affluent period in the company’s history. In the 1920’s, New Yorkers claimed that it was not surprising to walk down the street or look out the window and see another skyscraper or building being constructed by Bethlehem Steel. The company’s chief engineer during this time, Carson F. Diefenderfer, commented that “Bethlehem Steel owned New York.” The company provided the steel for 80 percent of the New York skyline.

Bethlehem Steel did not just leave its mark on New York; it also provided the steel for structures across Pennsylvania. The corporation expanded in opposite directions across the state, taking on projects in both Pittsburgh and Philadelphia. The University of Pittsburgh campus is home to the well known 42-story Cathedral of Learning. In 1926, Bethlehem Steel provided the backbone for the Cathedral, the second-tallest education building in the world. In the same year, the company also created the Benjamin Franklin Bridge, located in Philadelphia. The bridge, which spans the Delaware River, stretches over 9,650 feet.

In 1929, Walter Chrysler and banker George Ohrstrom were in competition with each other to see who could build the tallest building in New York. Ohrstrom claimed that his 67-story Bank of Manhattan building could not possibly be topped. Chrysler, however, already had a goal in mind and was not going to let anything stand in his way. Ohrstrom declared at the November news conference that he had won the race against Chrysler. This announcement came about four days too early; Chrysler came out with plans to raise his own building 860 feet to become the actual winner. Bethlehem steel reaped great profits from this competition, for they built both monumental buildings. Bethlehem Steel continued to remain successful, despite the onset of the Great Depression. In fact, the company expanded, creating smaller steel plants in San Francisco and Los Angeles, and eventually owning ten other plants nationwide. 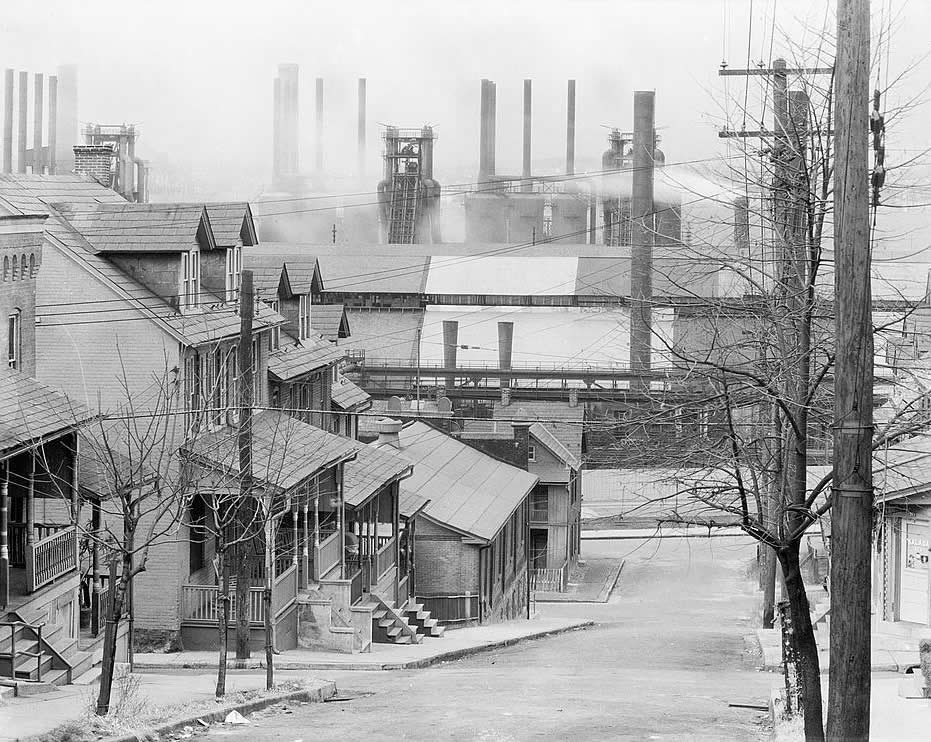 Walker Evans, Library of Congress
The City of Bethlehem centered on the Bethlehem Steel Plant, as in this 1936 photograph.

One Saturday in September 1939, Grace was enjoying a game of golf when a caddie hurriedly approached him to announce that World War II had just erupted. Grace looked at his colleagues and supposedly said, “Gentlemen, we are going to make a lot of money.” His prediction proved true: a few weeks after the United States entered the war, Bethlehem Steel already had more than $1.3 billion in orders for ammunition, battleships, aircraft, and bomb casings. Not only did the war create profits for the corporation, but it allowed the company to more than double their employees, going from 13,055 before the war to 31,523 by 1943. Because of the high demand for ships, artillery and aircraft, a large part of Bethlehem Steel’s production at the time was devoted to materials for the war. During this period, the company became the world’s largest supplier of ships, producing more than one a day at its Maryland plant. After the company’s colossal contribution to the war effort, it continued to produce steel for famous bridges, such as the Golden Gate.

However, Bethlehem Steel eventually began experiencing internal and external difficulties. The corporation’s profitable golden days came to an end in the 1960’s. When the national civil rights movement took place, the company was required to look at the treatment of employees and questions were raised about whether or not the steel industry was being lead by money-hungry individuals. During this time, employees were demanding higher wages, better benefits and were going on strike to make sure this was accomplished. This turmoil in the company gave foreign industry a chance to pull ahead.

Bethlehem Steel also faced competition closer to home. With the advent of newer forms of manufacturing, Bethlehem Steel was pushed out of the spotlight. One example was a new process called the “mini-mill” which took scrap metal, melted it down, and turned it into new products. The mini-mill guided steel production in a direction formerly thought to be impossible. With new technologies beginning to arise, the corporation suffered and was forced to conduct massive layoffs throughout all of the plants. Due to technological advances, foreign competition, failed market strategies and union demands, Bethlehem Steel was forced to cease production on November 18, 1995. Jet Lowe, Library of Congress
Generations of Bethlehem workers toiled in the plant, like these using ingot molds to make bars of steel.

Those who grew up with Bethlehem Steel never imagined the successful corporation would fall. Union leader and 27-year employee, Jerry Green, said of the plant’s demise, “I never would have believed it in my wildest dreams. I thought Bethlehem was a giant and steel was king.” The company finally declared bankruptcy in 2001, an unfortunate end for a once booming company. Philadelphia Inquirer reported Bethlehem spokeswoman Bette Kovach’s confirmation of this. “It’s a sad, painful event. Is this how people who worked for Bethlehem Steel envisioned it would end? No, it’s not.” In 2003, The Philadelphia Inquirer also relayed that Bethlehem Steel sold its assets to International Steel Group Inc. of Cleveland for $1.5 billion. All that remained of the historic corporation were memories.

To guarantee that no one forgets Bethlehem Steel’s lasting legacy, the National Museum of Industrial History is being constructed on the site of the company’s former electric shop. The museum will highlight the impact of the Bethlehem Steel Corporation on not only Bethlehem, but also the rest of the United States. Along with the museum, an entertainment complex is being built at the site. The new Sands Casino complex has turned part of the plant into a slot casino, restaurants, shopping venues, and other forms of entertainment. The Sands Casino is predicted to bring in $20 million annually in tax revenue and will provide employment opportunities to area residents.

Bethlehem Steel has indelibly left its mark on United States history. The corporation broke records and christened new technologies in American Industrial history, while employing generations of families and supporting the United States in both World Wars. Without Bethlehem Steel, the New York skyline would be unrecognizable, the Allies would have gone into war unarmed, and the first strides in steel manufacturing would not have been taken. The Bethlehem Steel Corporation was a king in the world of steel manufacturing and its legacy lives on in the city of Bethlehem, the state of Pennsylvania, and the rest of the country.