When traveling across Pennsylvania, what would entice one to stop in a rural town to grab a bite to eat? There are no giant billboards to promote its existence, yet every day people from far and wide will come to gorge themselves at the burger haven known as Denny’s Beer Barrel Pub.

Denny's Beer Barrel Pub
The sign of the giant hamburger brings visitors from around the country. Most don't realize that, with some notice, Denny's can almost make a burger the size of that sign!
Founded in September of 1977 by current owner Denny Liegey, Denny’s Beer Barrel Pub has become a staple of Clearfield, Pennsylvania. Over the years, Denny’s has grown in both size and popularity. This growth in popularity has led local fame to many national appearances on television shows including Rachael Ray, the Colbert Report, and Extreme Pig Outs, among many others. This popularity can be attributed to the eating challenges created by Mr. Liegey in an attempt to broaden his customer base. In 1990, a friendly rivalry ignited when a local diner introduced a 1-pound burger. In the spirit of competition, Denny’s offered a 2-pound burger and the rest is history.

This Clearfield County pub offers a vast and diverse array of foods, but in actuality has become famous for one page of their menu devoted to the “World’s Larger Hamburger Challenges.” Included are five different challenges that customers may attempt as well as the 100+ pound hamburger which can accommodate up to 200 guests. Upon entering Denny’s, visitors see walls filled with Polaroid pictures of patrons who have attempted these challenges. On the borders of these photos, written in permanent black marker will be the word “FINISHED” or “NO,” most of them labeled with the latter.

Each challenge “dares” the adventurous eater to attempt to eat a prodigious amount of food in a specified amount of time. The individual challenges pit eaters against 2-pound, 3-pound, and 6-pound burgers. Doubles challenges feature 15-pound and 25-pound burgers. 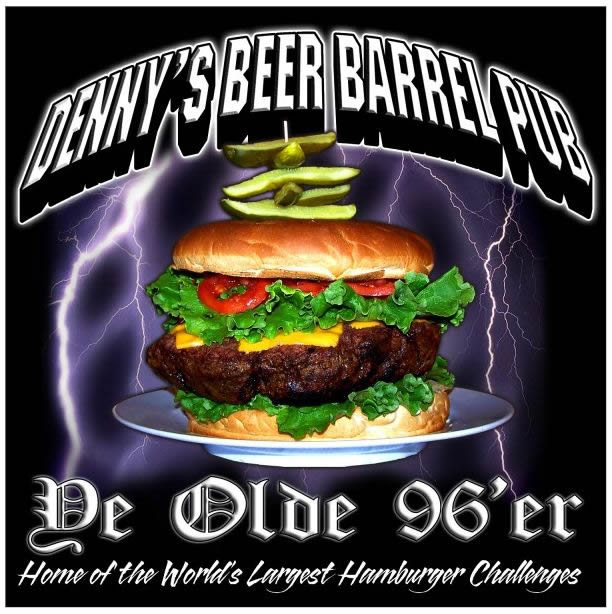 The most renowned challenge to date is the six-pound burger, named “Ye Olde 96er.” Since this challenge began in 1996, hundreds of patrons have given the task their best, but to no avail. Not even competitive eating star Eric “Badlands” Booker was able to complete this undertaking. He did down the burger, but took over 7 hours to do so. It wasn’t until January 2005, when a petite 100-pound girl from New Jersey viewed pictures of the gigantic 96er online and decided to take the trip to give it a try. 2 hours and 54 minutes into the competition, 19-year-old Kate Stelnick became the first to overcome the daunting task and did so just within the 3 hour time limit. To put this accomplishment into perspective, the ingredients of the 96er are as follows:

Toppings included, this gargantuan burger weighs in at about 11 pounds, more than 10 percent of Kate’s body weight. For her triumph, she received a special certificate, a t-shirt, as well as having the $23.95 tab for the burger picked up by the Pub. Kate will always be recognized as the first to complete the task and rightfully deserves credit for taking the eating challenges to a new level.

Ms. Stelnick set the stage for Denny’s Beer Barrel Pub as it gained recognition from word spreading about her accomplishment. Many more challengers would come and go, but few could take down the 96er. Then Brad Scuillo arrived.

Not only did he eat the 96er, he did so in record fashion, setting the mark at 2 hours and 23 minutes. He wasn’t satisfied with the achievement however and decided to take his quest for gustatory glory further. The next challenge at Denny’s is called the Beer Barrel Belly Buster: 15 pounds of ground beef accompanied by over five pounds of toppings. It’s typically attempted by 2 people, but even with the duo, the task had proven to be too much. 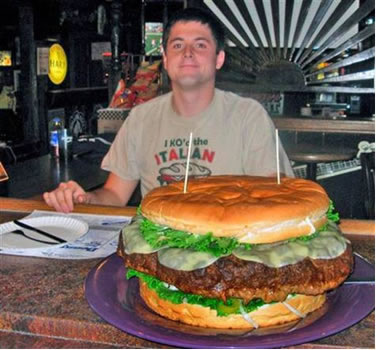 When hearing the news about Brad Scuillo’s impending attempt at the “Buster,” Comedy Central decided to follow Scuillo on his quest. The popular cable television show, The Colbert Report, filmed a satirical short documentary about Scuillo, titled “Eating the Distance.” Filmmakers follow him through training for the “Buster battle” and his attempt to take down the 15-pound behemoth. While training, it proved important for Scuillo to increase his stomach capacity. According to the Pittsburgh Tribune-Review, he practiced by stuffing himself in spurts, then relied on a liquid diet for the two days prior to the competition. Preceding the challenge he came up with a strategy that he plans to use as he ate the burger. For instance, because the relish on the burger is so acidic, he planned to use the mayonnaise as a primer to prevent his stomach from becoming upset (which seems inevitable).

The stage was set for Scuillo, and he tried not to disappoint the crowd who wanted to see him make competitive eating history. With owner Danny Liegey in the background, he forced down the last bite of the monstrosity they call the “Buster.” With the clock at 4 hours and 39 minutes, Brad completed this astounding feat with 21 minutes left.

Brad overcame a lot adversity by completing this challenge. After the feat, he was wiped out. “You sit on the steps of the restaurant and feel like you got beat up by eight people,” he told the Tribune-Review. Dr. Louis Arone, a nutrition expert interviewed on the Colbert Report said what Brad did could “kill someone,” and that even with the accomplishment, he could experience serious health risk during and after the challenge. Asked in a brief interview after the challenge, if he would do it again, an exhausted Scuillo simply responds “not with the relish.” For completing the challenge within the allotted time frame, Scuillo received $400, three t-shirts, a certificate, and “a burger hangover,” as Denny Liegey would refer to it. 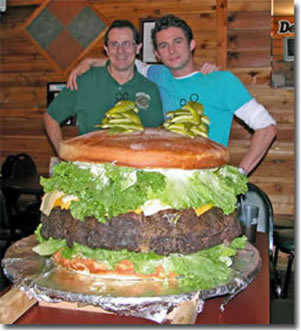 Eating challenges aren’t the only thing that Denny’s is known for. For the past few years they have been in a constant battle to keep the title for the biggest burger in the world. In a rivalry with a restaurant in New Jersey, the record would go back and forth for some time originally starting with a 50-pound burger a few years ago. The latest held by the restaurant in New Jersey was a hamburger that tipped that scales at 105 total pounds!

Danny Liegey was not to be bested however. The Rachael Ray show featured the making of a Denny’s 100-pound burger that took over 9 hours to cook. The oven was not large enough to accommodate the burger, so the use of a special heat shield was necessary in order to keep the temperature precise. In turn, a 30-pound bun had to be made to house the burger. TD Fabricating and Welding, a locally-run business, assisted Denny’s in custom-making stainless steel pans for construction of the bun. After the bun and burger were finished, the toppings were applied. They included 4 pounds of tomatoes, 3 pounds of lettuce, 160 slices of cheese, several jars of peppers, one pound each of ketchup, mayonnaise, relish, mustard, and, finally, a topping of 30 pickle spears. With a final weight of 123 pounds, Liegey and his supporting staff set out and accomplished their goal of making the world’s largest hamburger.

These challenges and competitions are not the sole reasons why Denny’s has become a favorite for countless individuals. This unique atmosphere, coupled with the local hospitality, says a lot about the restaurant. Denny’s has shown its devotion to the community through many fundraisers and has supported local businesses as well. Examples include their purchase of the specialized baking pans for the buns through the local fabrication plant.

Denny’s rural ambiance attracts customers from just about everywhere. According to Liegey, there have been customers from all 50 states and numerous different countries. In a small town such as Clearfield, this broad customer base can only help the local community. Typically, countryside locations aren’t considered tourist hotspots, but as long as Denny’s is around, frequent visitors are inevitable.