Bretzel is the German word for what we know as pretzel. When creating his own pretzel company in 1911, Adolph Benzel gave his central Pennsylvania bakery the name of Benzel’s Bretzel Bakery. A hundred years later, the name on the door of the family-owned business remains the same.

Adolph Benzel, an immigrant from Germany, arrived in America with an old world recipe for pretzels and a dream of establishing a bakery. Benzel, along with his family, stepped out of a boxcar in Altoona, Blair County, in November 1911. He had worked for other bakers across the state, but decided it was time to put the family recipe to use and start his own pretzel bakery.

He acquired a rather small building of 75 square feet with a bakery oven to start his quest. The family recipe turned this small bakery in which the pretzels were shaped by hand into something he never imagined.

The bakery evolved into one of the most modern pretzel bakeries in the world, a 180,000 square foot bakery that produces up to 50 million pretzels a day in different shapes and varieties: pretzel thins, pennysticks, mini pretzels, waffle pretzels, nuggets, braided pretzels, sourdough hard pretzels, penny grahams, rods, nibblers, thick sticks and thin sticks. 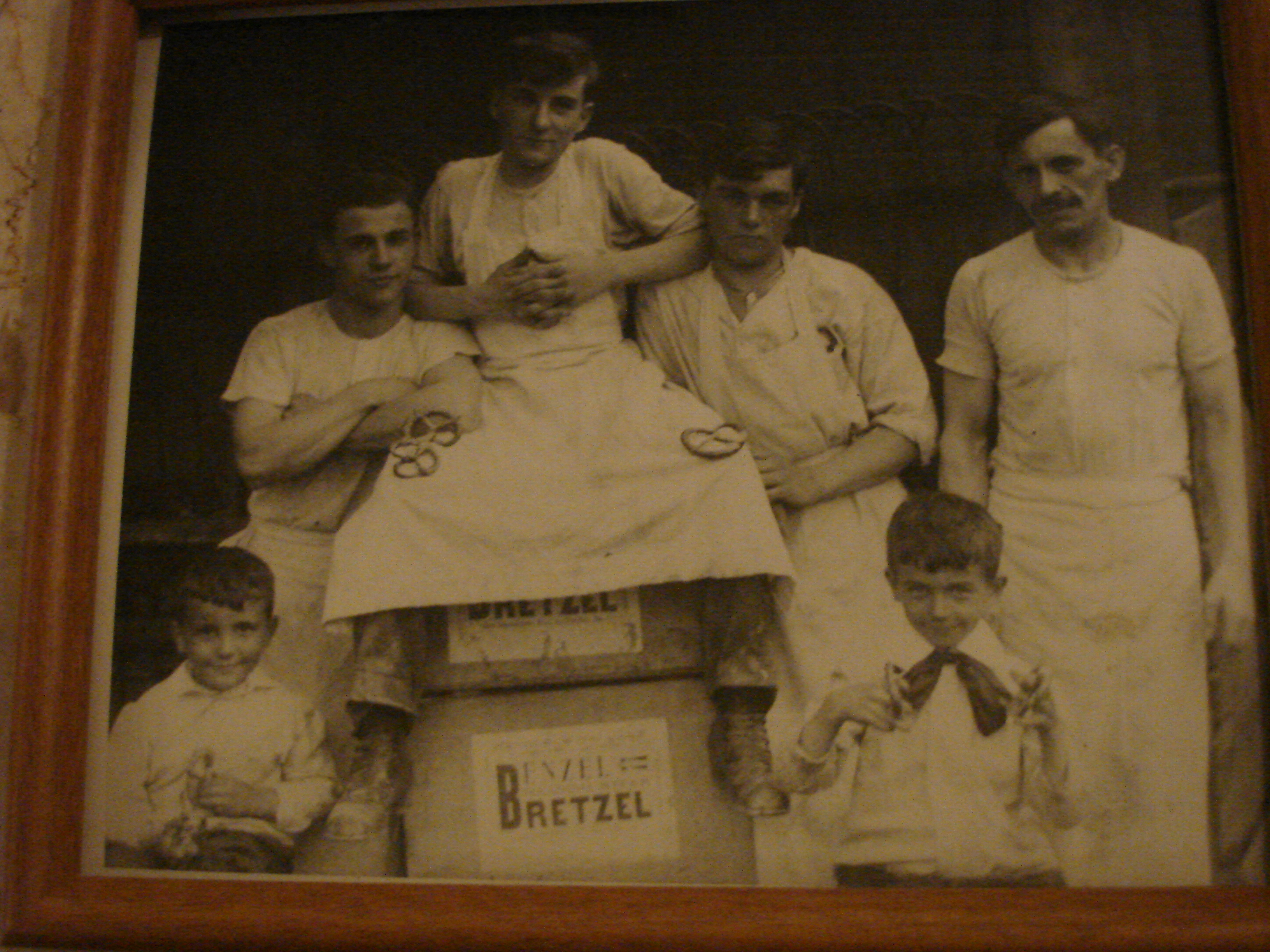 Benzel's Bakery
These young bakers from the company's early years might be amazed at the baking technology that has developed since their time.

This range of products and the means of transporting them have changed significantly in the 100 years since Adolph began making pretzels. In Adolph’s time, a horse and wagon was followed by a motorized vehicle. Today with global sales, the company utilizes a much more sophisticated means of transporting products which could include trucks, planes and ships.

An authentic caboose sits in the parking lot of the factory. Altoona is an old railroad town and the caboose, as well as the factory store, draw a large number of people to the bakery when exploring the city of Altoona and its attractions such as America’s oldest roller coaster at Lakemont Park, the world-famous Horseshoe Curve and the recent Railroaders Museum. Most visitors travel from within Pennsylvania, as well as from neighboring Ohio and New Jersey.

Around 1975, Benzel’s attracted visitors with a self-guided factory tour which allowed visitors to get up close and personal with the pretzel making process. Over 300 scheduled bus tours every year would stop by to take the tour and visit the outlet store that is connected to the bakery.

During the tour, people could meander along a glass-enclosed hallway and look into the stainless steel ovens to see the pretzels being made. Benzel’s closed its tours in 2000 as they needed extra space and because of liability and confidentiality issues. 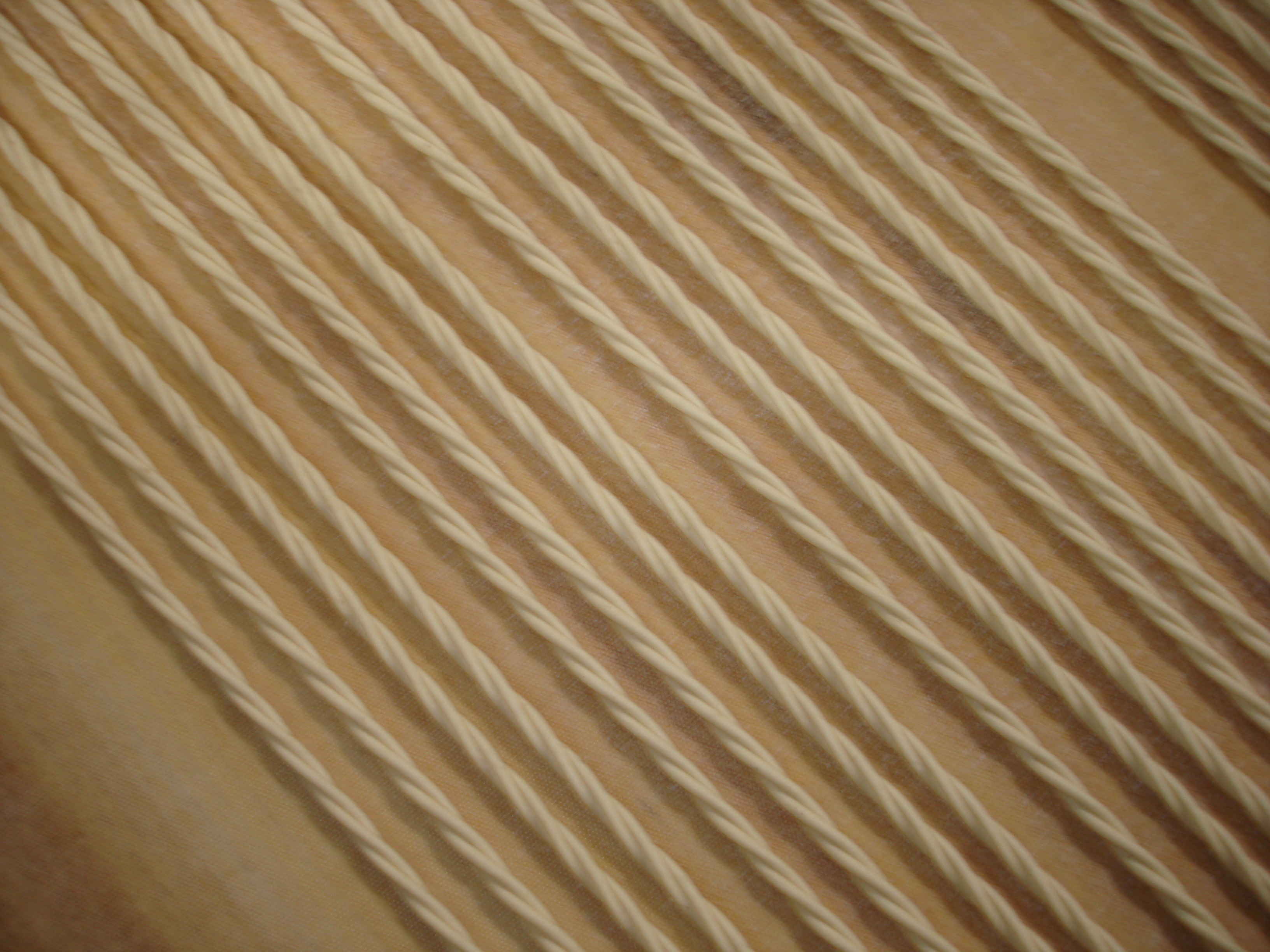 Benzel's Bakery
Benzel's Braids on their way to the ovens.

If you were able to watch how the ingredients turn into the final product, this is what you would see. First, a mixing machine carefully blends all of the ingredients into dough. The dough then travels through an extruding machine where it squeezes the dough into long formulated strips. From here, automated knives cut the long dough strips into individual pieces. Next, the dough moves along the conveyor belt to the proofing line where it rises and sets. After the dough rises, the product is rinsed with a soda bath to make the outside layer crispy and is lightly salted. Finally, the dough is baked in a 100 foot long oven. From the oven, the pretzels are inspected, packaged, and ready for delivery to a vast array of customers.

This process is estimated to take around 45 minutes and is highly automated, almost untouched by human hands. Quality control checks are important for each batch having the same Benzel’s taste. Ten checks are made for each baking. After all this time the original recipe is still closely followed. However, the owner commented that some pretzels bake at 200 degrees farenheit where some bake at 800 degrees.

With over 100,000 pounds of flour and 4,000 pounds of salt a day used in the pretzel process, where does nutrition come into play? Benzel’s Pretzels are not out of bounds in terms of dieting. Pretzels have been found by nutritionists to be a part of regular low-fat diets. This notion has allowed Benzel’s to succeed when it comes to eliminating fatty foods.

Benzel’s keeps up-to-date with new products as well. Recently they have touched on new products such as oat bran and soy pretzels. “Soy is really coming into play and oat bran never really lost it,” Ann Benzel said in an interview. Organic products are also currently very popular.”

Benzel’s Pretzels has also been integrated into a main dish in local cuisine. Most people have heard of potato-crusted salmon or parmesean cheese-crusted salmon, but how about pretzel-crusted salmon? Chef Nick Booker of The Bistro in Martinsburg has created such a dish. In an interview on “Keystone Kitchen,” a feature on the local WTAJ news in Altoona, Booker calls his Benzel’s Pretzels crusted Salmon “a Pennsylvania new classic.” 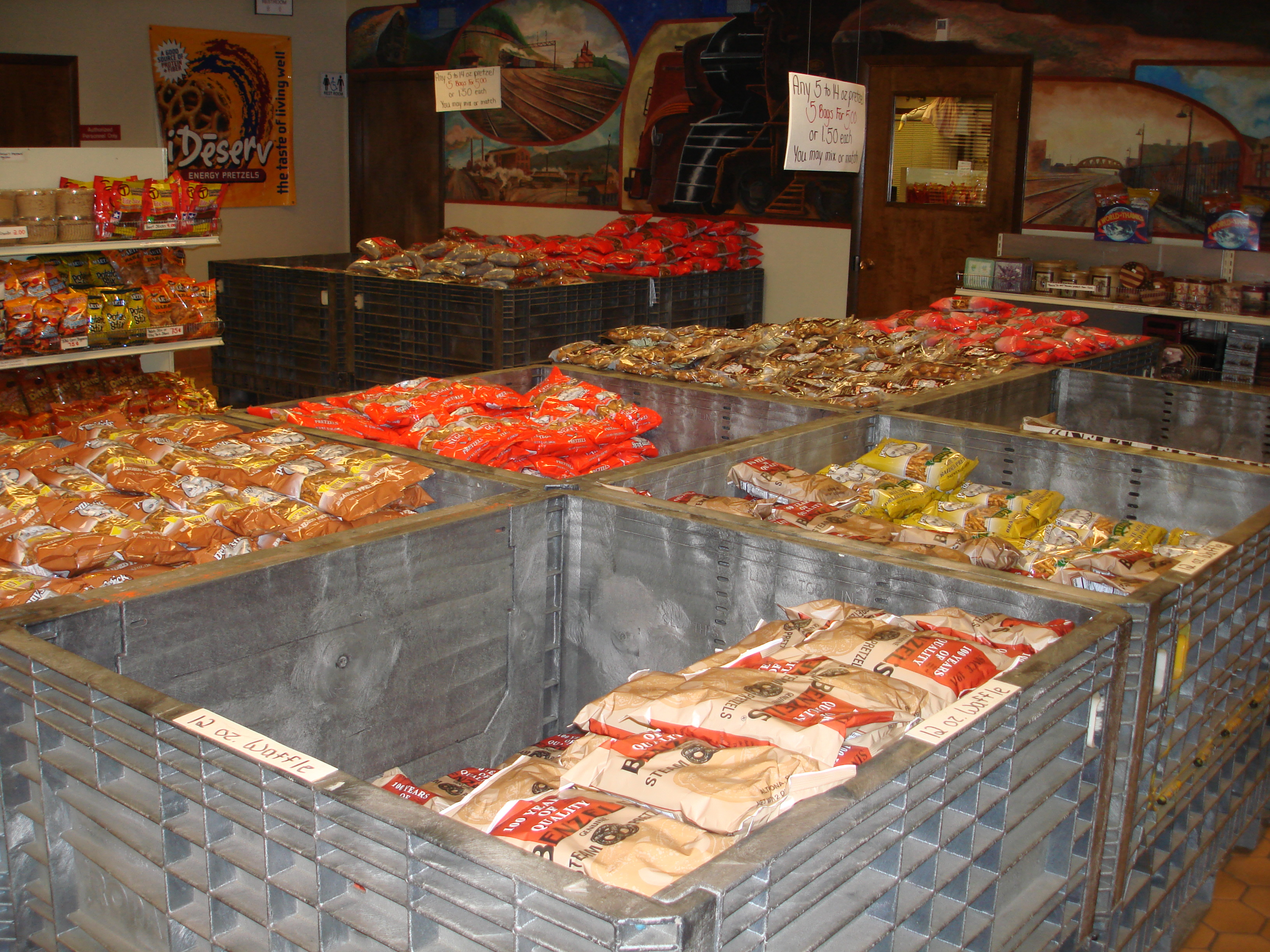 Benzel's Bakery
This outlet store at the factory in Altoona is a pretzel lover's paradise.

Salt and pepper is used for seasoning of the salmon and dipped in egg wash. All of the salmon is coated with finely crushed Benzel’s Pretzels. The salmon is cooked on the stovetop then baked in the oven. The salmon is then topped with balsamic reduction and lemon dill crème fraiche. This dish is usually served with baby baked patotoes and caramelized carrots. Booker said, “I took it off the menu for two weeks and people came back and demanded it to come back.”

It is not only the pretzels themselves that have worked their way to the fabric of the Altoona community . The family members running the bakery have made an impact as well.

One of the characteristics that sets Benzel’s apart from others businesses is that it is still family owned. In 1948, George Benzel, Adolph’s son, became the owner of the business. Bill Benzel, the grandson of Adolph, was the past president and owner of the company before giving his duties to his wife, Ann, the current owner.

While continuing on the tradition, Ann enjoys being a part of a small company with big company aspirations. She began as a part-time employee at Benzel’s. Ann was interested in starting a mail order business for the company, in which people could make orders by submitting forms by mail, by phone, by fax, or online. From this point on, she worked in every department and moved to full time status after three years. Her early years of experience, along with her husband by her side, led to her success. 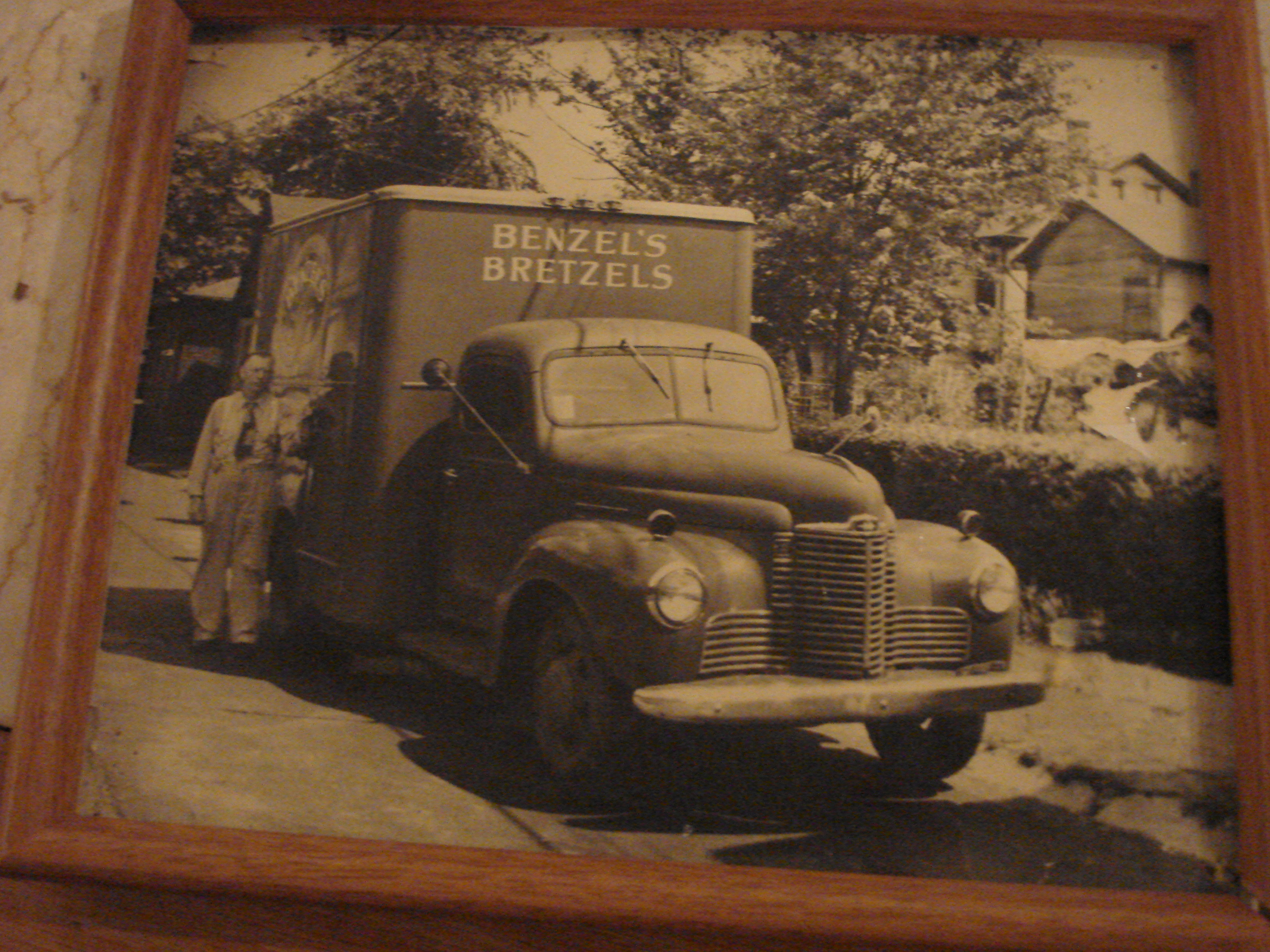 Benzel's Bakery
Today's company leadership carries on the traditions of Adolph Benzel...though they use different trucks.

Ann Benzel’s optimism and enthusiasm in the company has led to a recognition for Benzel’s Bakery to be named Outstanding Business of the Year by the Altoona-Blair County Development Corporation and Distinguished Family Business of the Year by Indiana University of Pennsylvania’s Eberly College of Business and Information Technology. In 2003, TV chef David Rosengarten named the Pennysticks, Benzel’s own brand, the best pretzel in America. Aside from the awards, the pretzels have been found on Air Force One, at the Smithsonian and at Dollywood.

Along with her success in the company, Ann Benzel has had other interests. She is a chairperson of the Pennsylvania Council of the Arts and a Chairman of the Mishler Theatre Restoration Project, as well as, a member of multiple boards of directors in the area.

The national average for pretzel consumption is about two pounds per person but in the mid-Atlantic states it is twice that much because of all of the snack food being generated close by . Adding to the history of the pretzel, Benzel’s contributes to the production of the salty snack that Pennsylvania natives are accustomed to. Whether it is bretzel or pretzel, the name does not matter when it comes to the old family recipe that made Benzel’s Bakery what it is today.