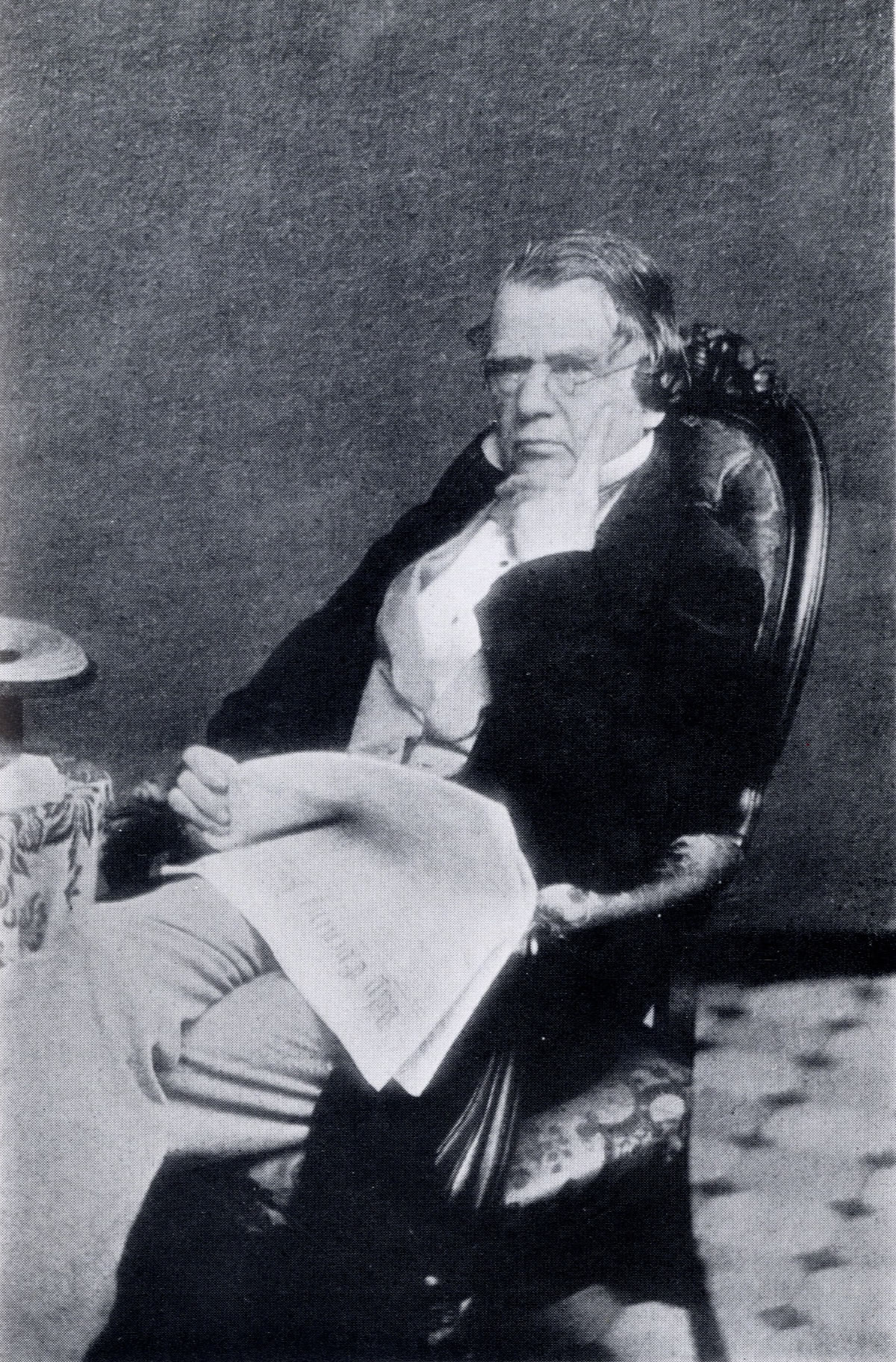 There was no sudden stroke of genius to inspire Volney Palmer’s motives, no mind-altering epiphany that changed the way he viewed business. Not even a shred of evidence exists to suggest he had any idea that his actions would alter business forever. He was just a knowledgeable small business owner struggling to make a profit in a city riddled with unemployment and debt. Yet despite his apparent ignorance, Palmer did, in fact, forever revolutionize business in the United States when he founded the nation’s first advertising agency in Philadelphia in 1841.

The business of selling newspaper space for advertisements was far from a novel idea in the 1840s. Beginning as early as 1704, American newspapers regularly published business and personal advertisements for a small fee. The son of a newspaper entrepreneur, Palmer was no stranger to this practice. As a boy, he assisted his father in the daily operations of collecting advertisements and publishing The New Jersey Mirror and Burlington County Advertiser, a small newspaper in Mount Holly, New Jersey. Yet despite his background in newspapers, Palmer pursued other endeavors when he left the family business. In 1841, Palmer moved to Philadelphia and established a real estate office in the city.

The economic conditions in Philadelphia in the early 1840s were far from attractive to entrepreneurial spirits looking to start a successful business. At that time, the city was caught up in a serious depression brought on by the Panic of 1837. While the rest of the country struggled with extreme financial issues, Philadelphia also suffered from trade competition. The combination of the two left the city in economic disarray.  Consequently, it comes as no surprise that Palmer struggled to keep his real estate business afloat.

Between 1841 and 1842, Palmer expanded his business practices to include a coal office in an attempt to broaden his clientele. It is also at this time that we see the beginnings of the establishment of Palmer’s advertising business. Listed beneath a description of Palmer’s real estate and coal office in the 1842 edition of M’Elroy’s Philadelphia Directory was Palmer’s first description of his advertising practices;

ADVERTISEMENTS and Subscriptions received for some of the best and most widely circulated Newspapers in Pennsylvania and New Jersey, and in many of the principal cities and towns throughout the United States, for which he has the Agency, affording an excellent opportunity for Merchants, Mechanics, Professional Men, Hotel and Boarding house Keepers, Railroad, Insurance and Transportation Companies, and the enterprising portion of the community generally, to publish extensively abroad their respective pursuits-- to learn the terms of subscription and advertising, and accomplish their object here without the trouble of perplexing and fruitless inquiries, the expense and labour of letter writing, the risk of making enclosures of money, etc. 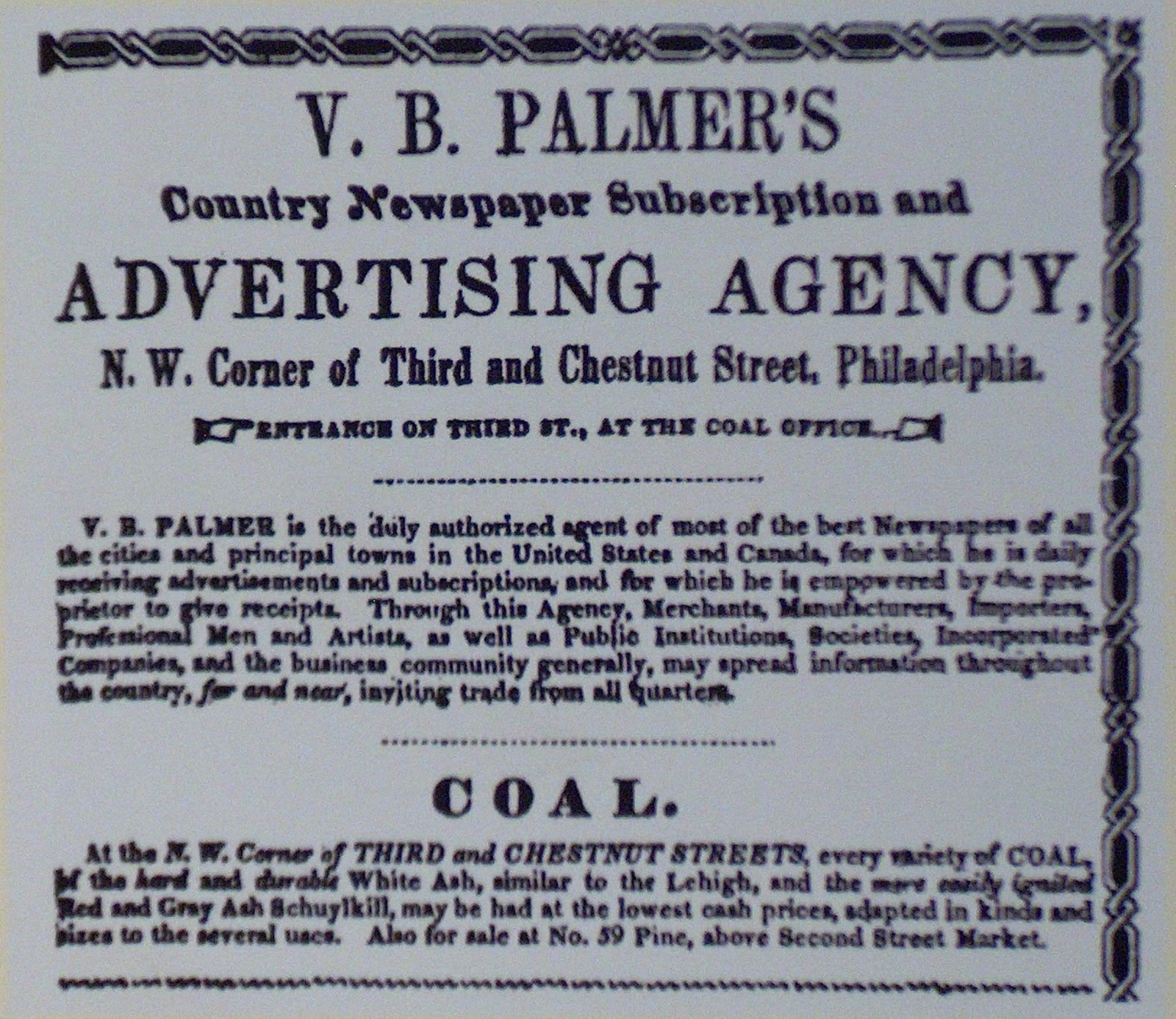 romeroads.blogspot.com
A simple ad from a, perhaps, simpler time.

According to Donald R. Holland, author of Volney B. Palmer (1799-1864): The Nation’s First Advertising Agency Man, “the arrangement of the copy suggests that Palmer in 1842 viewed himself as a real estate man who had a coal business and who also happened to be an agent for advertising and subscriptions for a few nearby newspapers.” While Palmer was laying the foundations for his advertising agency at this time, he did not yet consider himself an ‘advertising agent.’ Worker on behalf of other businesses was not yet, his concern. Instead, Palmer considered himself a ‘newspaper agent’ working on behalf of the newspapers rather than the advertisers. It was not until the 1849 issue of M’Elroy’s Philadelphia Directory that Palmer officially referred to himself as an ‘advertising agent.’

Though Palmer’s emergence as an official ‘advertising agent’ was a slow and modest process, the impacts of both his practices and the establishment of his agency were far from subtle.  As early as 1842, Palmer had a firmly established list of clients, representing newspapers all across Pennsylvania and into Maryland, and extending as far as New Jersey, Kentucky, Missouri, Tennessee, and even Alabama. But Palmer did not stop there. According to Holland, by 1849 “The American Newspaper Subscription and Advertising Agency of Volney B. Palmer, Esq., claimed to be the sole representative of 1,300 of the estimated 2,000 newspapers published” at that time.

Palmer’s extensive list of followers was unheard of at the time, as were the systematic methods he used to operate his agency. Not only did Palmer provide potential advertisers with space rates for each available publication, but he also presented them with a full production that organized each publication according to target market and population. When necessary, Palmer advised advertisers on appropriate advertising copy, sculpting efficient works at no cost to the client. In serving as a knowledgeable liaison between publishers and advertisers, Palmer was able to charge publishers a commission (widely believed to be on a 25 per cent basis) while maintaining repeat business from satisfied advertisers. Overall, Palmer possessed a thorough understanding of the advantages of his service, and “set out to show his clients how they might use this tool ‘to advertise judiciously, effectively and safely.’” With such an innovative and unrivaled idea, it is not surprising that Palmer’s advertising agency grew rapidly. Furthermore, the advancements in transportation brought on by the expanding use of steam engines expedited Palmer’s business processes and encouraged the physical expansion of his practice. In 1845, Palmer opened a second branch of his agency in Boston before opening two more offices in New York and Baltimore shortly thereafter.

Just as Palmer’s business grew, so did his competition. Yet, despite a growing presence of advertising agencies in the 1850s, it was widely expressed that none could compare to Palmer’s agency.   Holland provides a testimonial written in the New York Daily Tribune, “Our agent for the city of New York is Mr. V. B. Palmer…. A dozen different could not do half so good that this one may, if generally supported.” Palmer was the best advertising agent of his time, and he remained so well into his fifties.

Immediately after the purchase of Palmer’s agency, Francis W. Ayer of N. W. Ayer & Son, Inc. made drastic changes to the common practice of advertising agencies set forth by Palmer. He, too, looked to revolutionize the advertising industry in the United States. According to the Advertising Age article entitled “N.W. Ayer & Son (N.W. Ayer & Partners),” “Ayer pioneered the ‘open contract,’ a revolutionary change in the method of billing for advertising that became the industry standard. It also pioneered the use of fine art in advertising and established the industry’s first art department. It was the first agency to use a full-time copywriter and the first to institute a copy department.” 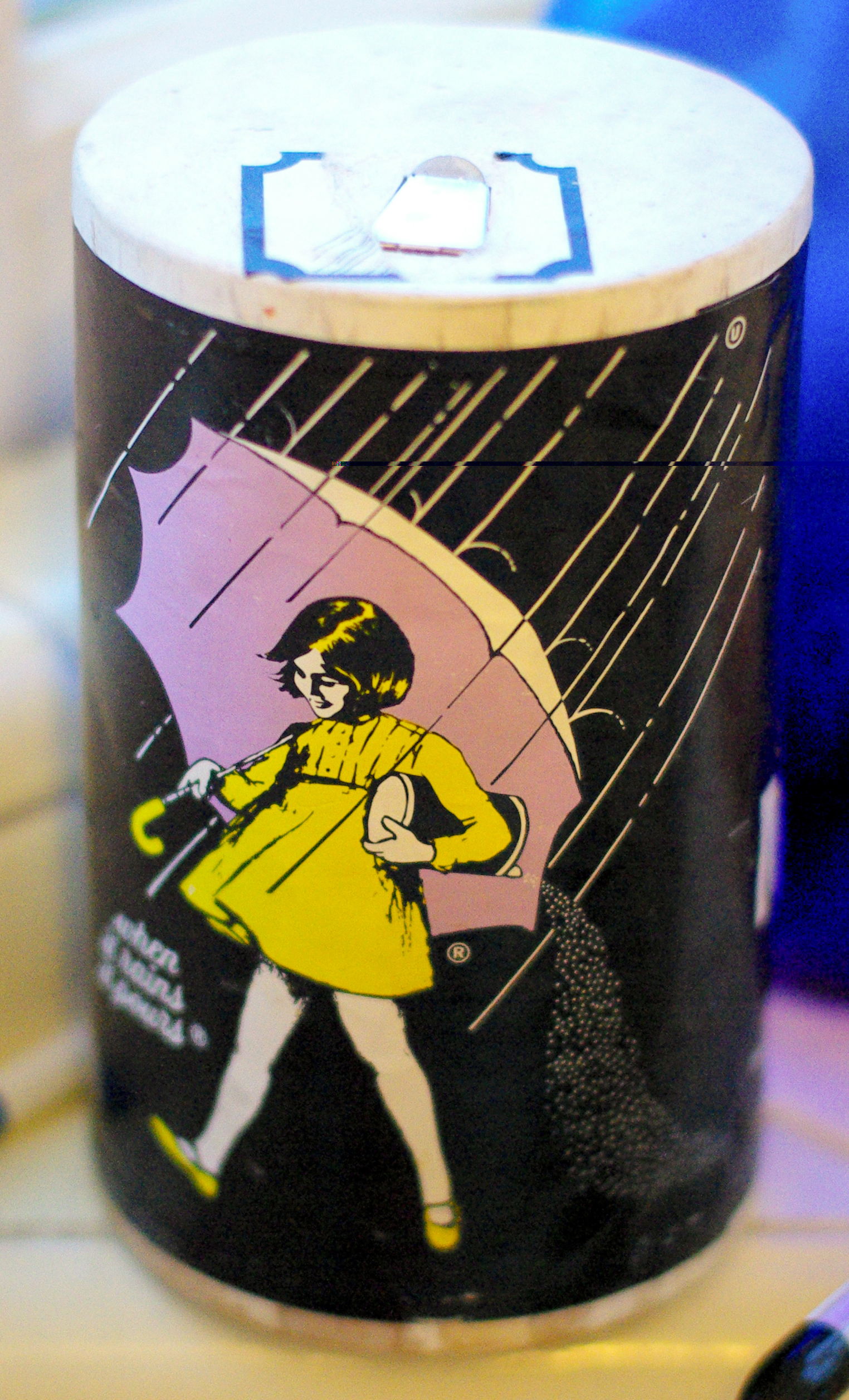 Dolan Halbrook
The Morton's Salt girl was one of the great successes of the N.W. Ayer ad agency.

Through the implementation of these revolutionary practices, N. W. Ayer & Son, Inc. created some of the most well-known and recognizable advertising campaigns to this day. Among Advertising Age’s Top 100 Advertising Campaigns of all time, Ayer’s agency alone holds seven spots, with campaigns such as DeBeers’ “A diamond is forever,” the U.S. Army’s “Be all that you can be,” Morton Salt’s “When it rains it pours,” and Camel cigarettes’ “I’d walk a mile for a Camel.” It was the establishment of Palmer’s agency in Philadelphia in 1841 that made the creation of these timeless slogans possible, and it is that same agency that encouraged all great campaigns known today.

Only a limited number of innovations have come about in history that can be attributed to truly shaping the current state of the advertising industry; Gutenberg’s invention of moveable type in 1447, as well as the right to freedom of the press as established by the first amendment are among the few. Yet, while Palmer may never have fully realized or understood the impact of the establishment of his agency in the mid-1800s, this innovation is without a doubt among the ranks of the aforementioned few. What began as a secondary business established for the purpose of turning a small profit grew into an advertising system unlike any before.  As a result, this unexpected, novel practice enabled Palmer to forever revolutionize the way business is done in the United States.