A Coffee Pot for Giants 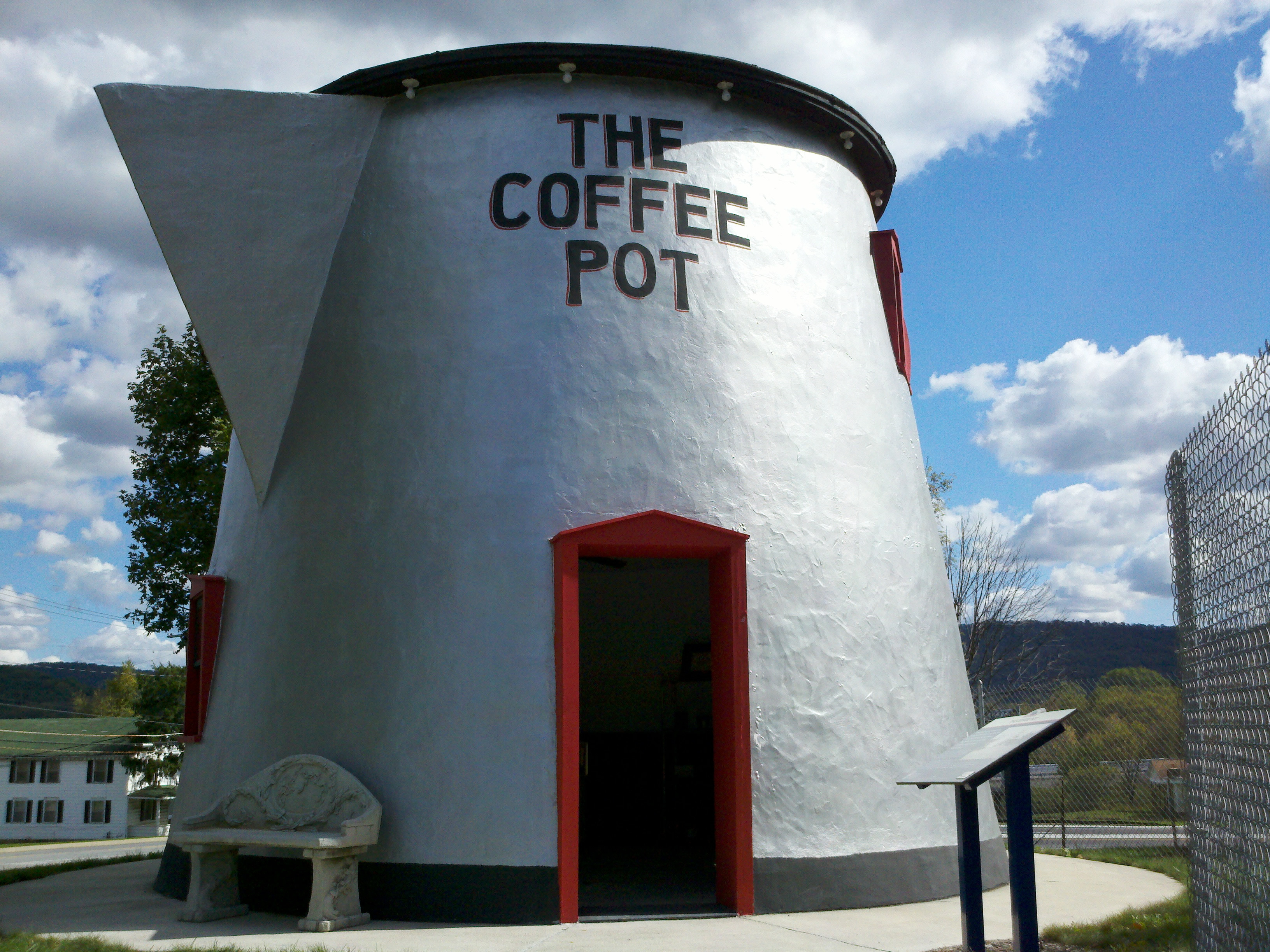 Jerin Miller
The Bedford Coffee Pot now sits in its restored glory at the Bedford County Fairgrounds.
The Lincoln Highway is not only one of America’s oldest roads, but also the first road to stretch across the country, all the way from New York City to San Francisco. U.S. Route 30, which stretches from Astoria, Oregon to Atlantic City, New Jersey, shares much of its length with the Lincoln Highway. In Pennsylvania, the Lincoln Highway/U.S. Route 30 cuts across the bottom half of the state, treating its travelers to lovely landscapes as it winds through the mountains. The scenery is beautiful, but even more remarkable is the strange architecture that can be found on the side of the road. On the edge of one mountain perches a ship-shaped hotel, overlooking a breathtaking view. Further down the road stands a tall statue of a man playing a pipe, and in the private park behind him passersby can catch glimpses of a giant shoe housing a little old woman, or a huge white whale in the act of swallowing Jonah; all made of metal. But perhaps the strangest building of all can be found within the little town of Bedford in the shape of a large coffee pot, complete with a handle and spout.

The Coffee Pot, sometimes called the Koontz Coffee Pot, was built in 1927 by David Berton Koontz to attract more customers to his service station. It was originally a small luncheonette connected to the Koontz Garage, right next to Lincoln Highway/U.S. Route 30. The Bedford section of the highway was heavily traveled compared to other roads of the time, and was thus the perfect site for a coffee pot/service station to give rest to folks traveling from New York City to Pittsburgh, or from Pittsburgh to Philadelphia. The large pot is made of bricks and stands 18 feet tall and 22 feet wide. According to Roger Young of American Motorcyclist, in its prime, “the building was originally covered in sheet metal to more closely resemble its namesake kitchen appliance. The two-story structure had a ground-floor restaurant where Koontz served coffee, ice cream, and light lunches, and a small apartment above.” Were it a real coffee pot, it could hold 819,000 cups (about 51,000 gallons) of coffee. 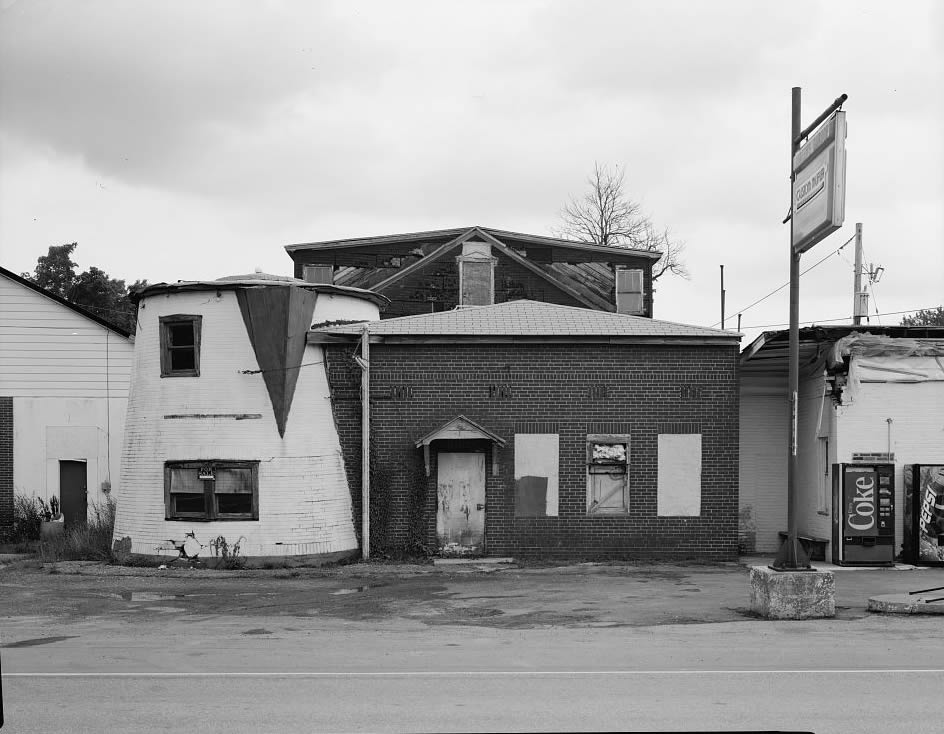 Joseph Elliot / Library of Congress
Having fallen into disrepair, the Bedford Coffee Pot was nearly demolished.

The oddly-shaped building is an example of programmatic or novelty architecture, which, as explained by Debra Jane Seltzer, are “term[s] for buildings that imitate or look like something else (giant food, animals, people, objects, etc).” Usually the shapes have something to do with the buildings’ functions. Programmatic and novelty architecture was quite popular in the early 20th century, because when “the automobile became affordable and roads improved, businesses competed visually along the highway prompting business owners to erect these eye-catching structures.”

As a major roadway with plenty of tourists to trap, Lincoln Highway was home to many pieces of programmatic architecture. A few miles to the west once stood the S.S. Grand View Ship Hotel, a ship-shaped building positioned on the side of a mountain. The hotel boasted “The best view in Bedford County,” for three states and seven counties were visible from its deck. Sadly, the Ship Hotel burnt down on October 26, 2001. In nearby Schellsburg, between the Coffee Pot and where the Ship Hotel once stood, is Storyland, an old children’s park that is home to a number of familiar fairytale buildings and statues made of metal, including the shoe-shaped house of a little old lady and a large whale about to swallow Jonah. Storyland was restored in 2007, but is now kept as a private property and is no longer open to the public.

Many of the Coffee Pot’s old patrons still hold cherished memories of the place when it was in its prime. Ann Wambaugh told the Pittsburgh Post-Gazette about the pet monkey that used to wander around the little luncheonette when she was a child in the 1950s. “We’d stop for lunch,” she said. “But most of all, I remember that monkey, just like an organ grinder’s monkey, running loose through the restaurant. That was just the highlight of my week.” Another old fan, Kevin Kutz, told how he used to play in a band at the Coffee Pot, and how “the people started whipping shot glasses back and forth at each other across the bar. It was like a shooting gallery.” The Coffee Pot was definitely a strange little building, but a beloved one. 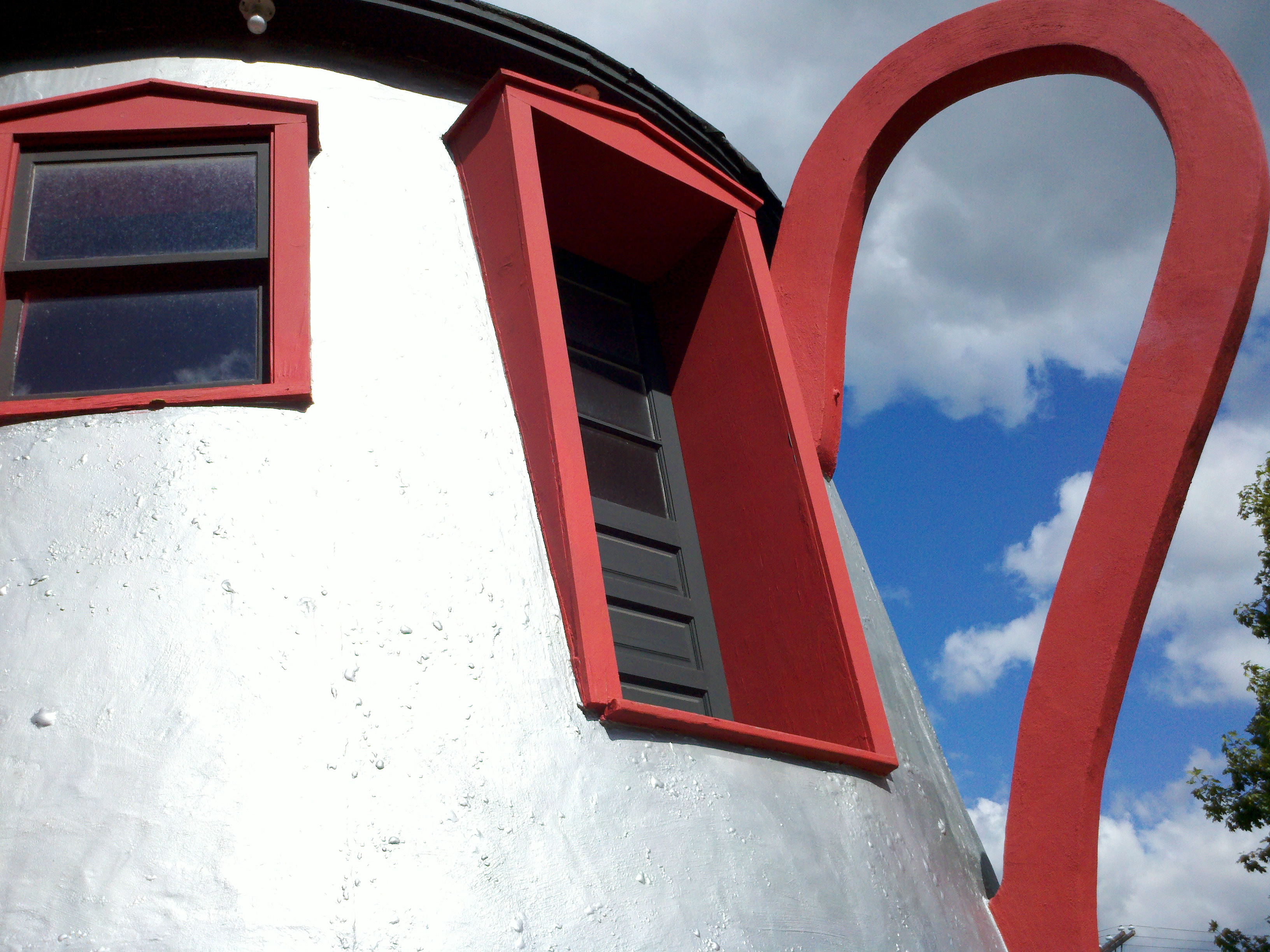 Jerin Miller
The handle of the Coffee Pot makes a striking outline against the blue sky.

The Coffee Pot caught fire on December 29, 1955 sometime between 2:20 a.m., when the bartender left the building, and 3:00 a.m. The fire was determined to have started in either a pile of beer cases or the trash can behind the building. The owners at the time were Mr. and Mrs. William Dawson who lived on the second floor of the hotel connected to the coffee pot. Thanks to the firemen’s swift response, the entire building was prevented from burning down. There was still damage, however, and the cost was estimated to be about $1,000. Adjusting for inflation since 1955, that amount is almost $8,000 today. Most people thought that was the end of the Coffee Pot, but the oversized kettle made it through its time of trouble.

After the fire, the Coffee Pot changed hands a few more times. Over the years, the building was used as a bus station, a bar, and a diner. It was finally closed in the 1980s and left vacant, and fell into disrepair over the next two decades.

In 2000 the Coffee Pot was bought by Samuel Lashley and his sons for $40,000, along with the gas station it was still connected to. The Lashleys were not particularly interested in the building; they bought it primarily for the land. The Coffee Pot was just a side feature for the gas station and no longer operated as a restaurant. By the time Lashley and his sons took over it, the Coffee Pot was in bad shape. The building was battered and old, and the two-by-fours and insulation showed through the weathered siding and torn shingles. People would stop to grab a Coke or Pepsi from a dispenser next door, occasionally pausing to snap a picture. Sadly, the Lashleys had neither the need nor the money to restore the building, despite how much they liked the it and wanted to see it opened again. As Sam Lashley told The Pittsburgh Post-Gazette, “...it should be restored. I’d like to see it restored.” He even offered to donate the building to preservationists, provided they had the money to restore it. 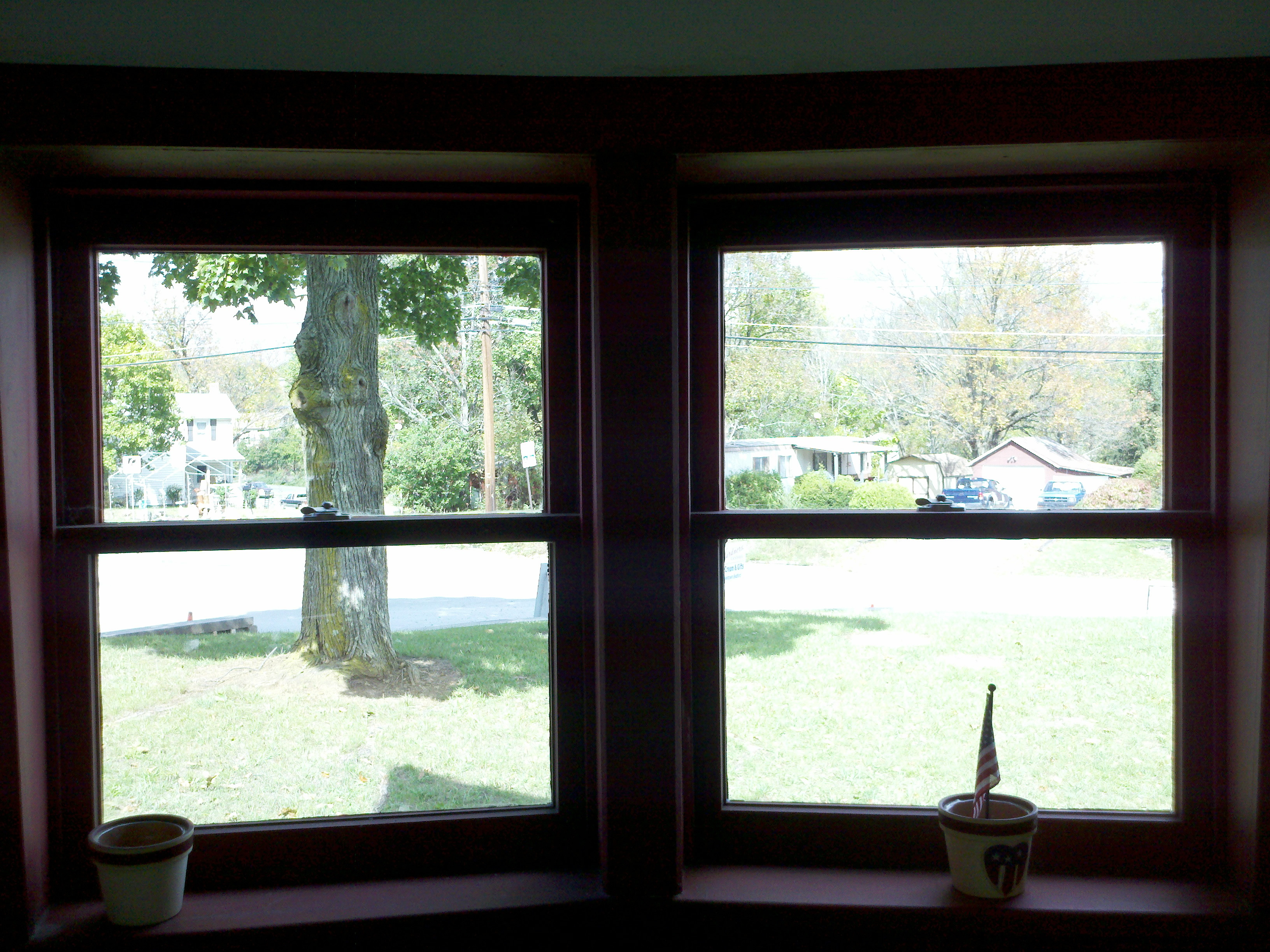 Jerin Miller
Rather than seeing a cup from the Coffee Pot's windows, viewers see the nearby neighborhood in Bedford.

The Lincoln Highway Heritage Corridor, a preservationist group, applied for a $100,000 grant through the Pioneer Historical Society and the PA Department of Environmental Resources to renovate the Coffee Pot. In 2003, the LHHC paid $80,000 to move the building and restore it. They also planned to sell it to the Bedford Fair for $1--about the same price as one cup of coffee. On December 5, 2003, the Coffee Pot was moved to the Bedford County Fairgrounds, just 125 yards from its original location. “I think it’s neat that they’re moving it and preserving it and not tearing it down,” Ed Emrick told The Bucks County Courier Times. He recorded the move on film during a snowstorm.

Preservationists were extremely happy to save the Coffee Pot, especially since so many other old roadside attractions and so much novelty architecture have been steadily disappearing over the decades. In the early 20th century, novelty and programmatic architecture was quite popular and easy to find along heavily-traveled highways. With the advent of the Interstate Highway System, however, many of the local highways experienced a lessening in traffic, and once-thriving businesses soon shut down. Without the support of tourists, many pieces of novelty architecture fell into disrepair and were demolished, or otherwise went past the point of restoration--as the S.S. Grand View Ship Hotel did when it was burnt to the ground. Novelty architecture everywhere is disappearing, and with it a part of road trip history. Olga Herbert, executive director of the Lincoln Highway Heritage Corridor, said, “[The Coffee Pot is] one of the few Lincoln Highway resources we have left…There was at one time 15 coffee pots in the United States, now we’re down to five.” 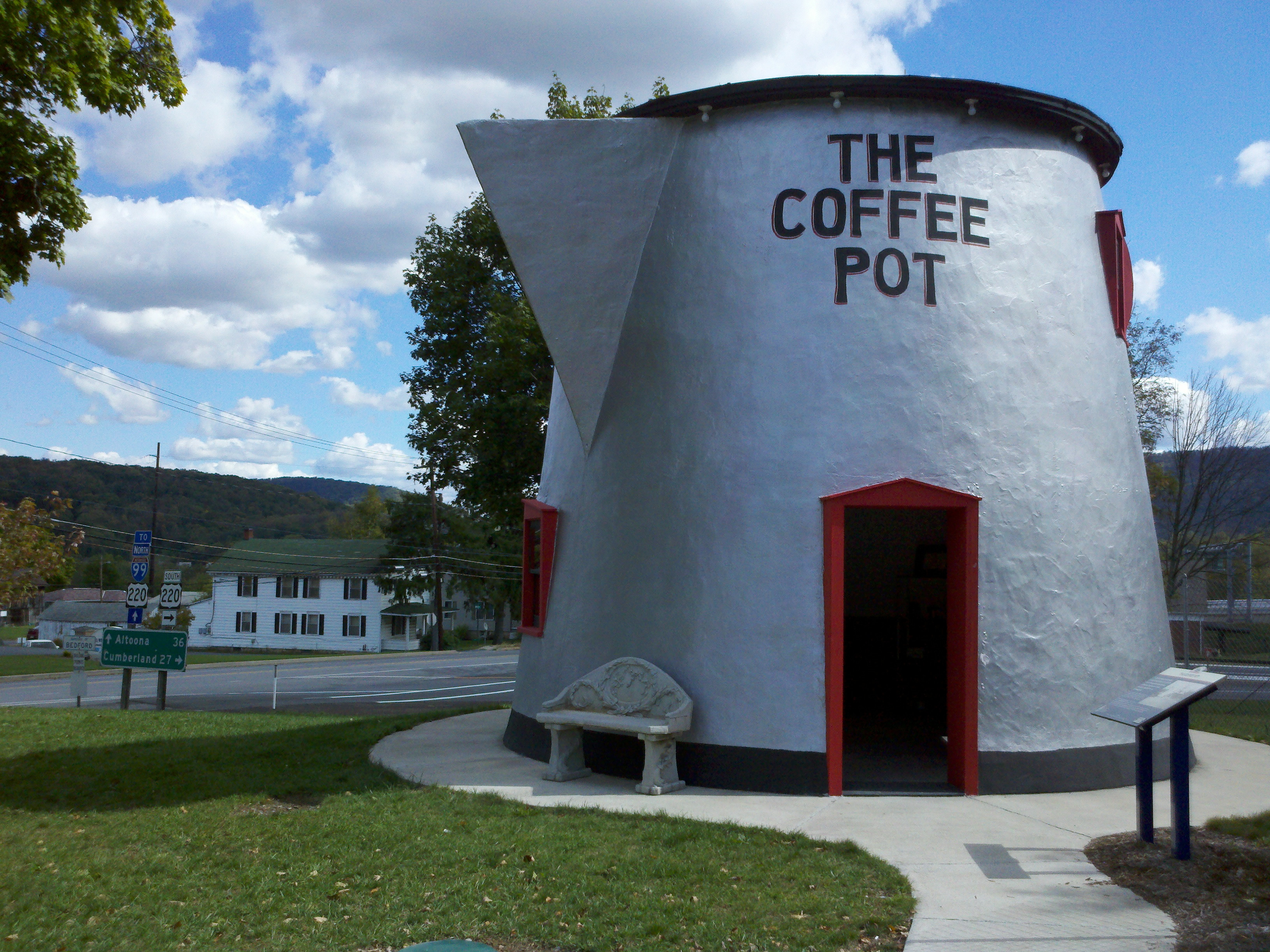 Jerin Miller
Travelers through Bedford can see this National Historic Landmark alongside the highway.

Today, the Coffee Pot can be found at the Bedford County Fairgrounds, in much better condition than it was at the start of the millennium. The exterior is painted a shiny metallic silver, to imitate the original sheet metal paneling. Visitors may enter the building to view some of the Bedford Fair’s historical artifacts and information, which are kept on display inside. There is no restaurant inside, but the Coffee Pot is restored, protected, and open for the public to appreciate, which is much more than can be said for many other pieces of programmatic architecture.

Unlike the burnt-down Ship Hotel and the privately-owned Storyland, the Coffee Pot is in good shape and can be enjoyed by any tourists or coffee lovers driving down Lincoln Highway, despite its lack of coffee. Of course, in order to properly enjoy the 819,000 cups (about 51,000 gallons) of coffee that the Coffee Pot could hold, a giant doughnut--which, incidentally, is another popular subject of novelty architecture--might be required.