Corks are Poppin' at PA Wineries 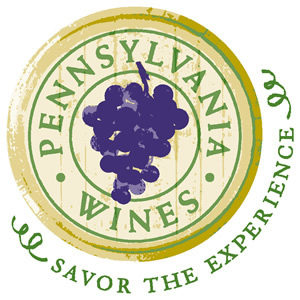 Pennsylvania Winery Association
Pennsylvania wineries are located in all parts of the Commonwealth.

The rolling hills of the European countryside. The winding trails of California's Napa Valley. And, Pennsylvania's Vineyards? What these locations around the world have in common are the proper conditions to produce one of the world's most valued items, wine. Wine is enjoyed in many cultures, particularly in Pennsylvania, to celebrate with family and friends, to balance a nice meal, and to savor while delving into an old novel.

Fine dining, romance, and socializing all complement the pleasure of wine. Even though wine production in Pennsylvania is a growing business, it remains a secret to many outside the state. The demand for Pennsylvania will increase as its reputation in the wine industry continues to develop. Pennsylvania, already recognized for its production of mushrooms, pumpkins, and potatoes for potato chips, ranks fourth nationally in terms of grape production. Although a large percentage of these grapes are sold as produce or used for jelly, the availability of such high quality grapes enables the local production of wine. Nationally, Pennsylvania ranks eighth in wine production. (A list of all wineries in the Pennsylvania Winery Association [with links] appears at the end of this article.)

The first documented commercial vineyard in Pennsylvania was the Pennsylvania Vine Company, established in 1793 along the Schuylkill River in Philadelphia's Fairmount Park. Over the next century, Pennsylvania vineyards spread first west to York and then north to Erie. However, the 1920s Prohibition movement destroyed most of the wine production in Pennsylvania. People still drank wine, but only for sacramental reasons. During this time, the grapes no longer used by wineries were used instead to produce grape juice. This shift is responsible for Pennsylvania's lasting reputation of producing high-quality grapes. In 1968, the state of Pennsylvania passed the Limited Winery Act, which gave residents the right to produce and sell wine in Pennsylvania. This law allowed for the establishment of small, family-owned wineries in the state. Since then, the state has witnessed growth and expansion of numerous wineries. In particular, the number of Pennsylvania wineries has skyrocketed over the past decade, growing from 40 to 130. 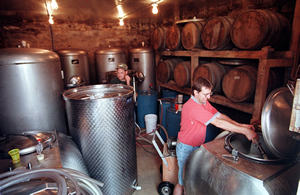 Wine from Pennsylvania is produced as it is elsewhere, through the fermentation of ripe grapes. Once harvested, these grapes are crushed and allowed to ferment. Red wines differ from white wines because of how their skins are used. Whereas the skins of red grapes remain in contact during fermentation for red wine, white grapes are pressed much earlier in the process to minimize skin contact for white wine. For both colors, yeast converts the sugar in the juice of the grapes to ethanol. The wine is then stored in new containers or aged in oak barrels until bottled and eventually consumed. The time between the initial production and the later consumption of wine ranges dramatically. Some wines are consumed within months, while others are stored for years.

The grape is the integral ingredient to wine; the quality of the grapes determines the quality of the wine. Fortunately, Pennsylvania has the ability to grow a wide variety of grapes. The Niagara, Concord, and Catawba grapes are indigenous to Pennsylvania. The terroir, the combination of factors relating to the harvest of the grapes, also allows for the growing of French hybrid grapes such as Chambourcin, Seyval Blanc, Baco Noir, Vignoles, and Marechal Foch. Vinifera grapes, native to Europe, yield drier Pennsylvania wines, such as Chardonnay, Cabernet Sauvignon, Merlot, and Pinot Noir. This wide variety of grapes can be found throughout Pennsylvania. 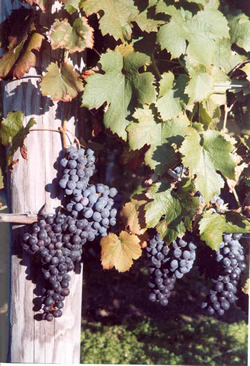 Pennsylvania Winery Association
Pennsylvania’s climate allows most varieties of grapes to grow in the Commonwealth.

Two keys factors that give Pennsylvania an advantage in the production of wine are its soil and climate. The soil is quite fertile for the cultivation of crops like grapes. The land of Pennsylvania is more comparable to the damp lands of Europe, rather than the drier land of California. In addition, the diverse climate of Pennsylvania offers suitable growing conditions. Salvatore Cullari, owner of Cullari Vineyards and Winery in Hershey, feels that "if we had less rain, the climate would be near perfect." Harvest season for grapes begins in late August and continues through October, with some flexibility depending on grape variety and vineyard location.

Although it is considered one of the benefits for local wine, the Pennsylvania climate can become a disadvantage during certain years. The winters in Pennsylvania are typically harsh and cold, especially in the northern parts of the state. This severe weather can cause damage to the grapevines. Pennsylvania summers can be hot and humid, which promotes the growth of disease on grapevines. In addition, the spread of frost over grapevines can become a problem during early spring and late fall.

John Tremba of Greendance Winery in Mt. Pleasant describes some of the disadvantages that Pennsylvania faces, including "the lack of large bodies of water, salty fog, longer growing seasons, total days of sunshine, and soil with volcanic nutrients." The presence of these factors contributes to the successes of wines from California, Australia, Chile, France, and other places. Despite these drawbacks, however, Pennsylvania's usually moderate climate and sloping hillsides provide one of the superior locations for wine production on the East Coast. 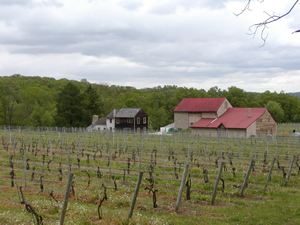 Pennsylvania Winery Association
French Creek Ridge Vineyards (above) is only one of dozens of wineries in all regions of the state.

Not only is it a successful growing region, but Pennsylvania's location also places itself at the epicenter of scientific developments in the viticulture field. Regional educational institutions like Cornell University, Virginia Tech University, and Pennsylvania State University lead the way in researching and testing new technologies. Cindy Helinski, co-founder of Greenhouse Winery in Rillton, identified the importance of science for wine, saying, "Chemistry is playing a more important role in wine production and colleges are becoming important resource centers for winemakers." Although grape growers and winemakers have access to and knowledge of new viticulture technologies, a majority of Pennsylvania wineries still heavily rely on traditional growing methods. Pennsylvania wines from small wineries are produced in a more intimate situation than the wines from large wineries in California, which utilize new technologies throughout production.

Another significant reason for successful wine production and consumption in Pennsylvania derives from the local palette: people enjoy drinking wine. Christopher Boyd, owner of Boyd's Cardinal Hollow Winery in North Wales, says, "No matter where you are, people love wine and the winery experience." The rising number of Pennsylvania wineries has led to a surge in the creation of wine trails. These local trails allow residents to explore several wineries of the same region in one trip. They also enable adventurous connoisseurs to discover new, local flavors.

Wine production in Pennsylvania has a considerable economic impact. A 2006 study by MKF Research, commissioned by the Pennsylvania Wine Marketing and Research Program, analyzed the economic impact of the local wine industry. The study concluded that there were "$661 million in total contributions to the state economy, 5,200 created jobs created with a total payroll of $161 million, and 877,000 visitors to Pennsylvania wineries with $167 million in tourism expenditure." Since Pennsylvania wine production and consumption continue to increase dramatically, these impressive numbers have likely risen since 2005. Overall, the wine industry of Pennsylvania affects the commonwealth's agriculture, commerce, economy, and tourism. 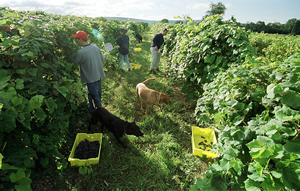 Mark Chien, state-wide viticulture educator of the Penn State Cooperative Extension, describes the association between the state government and alcohol as a "lukewarm relationship." Pennsylvania has not embraced locally produced wine as much as other surrounding states. However, the state government is slowly beginning to recognize what some residents already understand: Pennsylvania wineries can produce quality wines that generate profits. As for now, Chien feels that the Pennsylvania Liquor Control Board does not yet fully support the local wine industry.

The people involved in the wine industry are much different than people in conventional agricultural businesses. Since winemakers usually come from untraditional backgrounds and work in an untraditional field, a diverse community exists within the wine industry of Pennsylvania. This industry is capital-intensive, which means that wineries spend much more money on machines than labor. As a result, local wineries have high costs and high risks. It may cost anywhere from $10,000—$30,000 per acre to cultivate a sufficient crop for wine production, requiring millions to own and operate a winery. Knowing that rich profits are unlikely in this industry, Pennsylvania winery owners are driven by a passion for wine instead of money.

Because Pennsylvania has so many wine loyalists, the state wine industry will likely continue to grow. Chien, of the Penn State Cooperative Extension, feels that the commonwealth's wine industry can expand, especially after considering that less than two percent of wine drunk in Pennsylvania is from Pennsylvania wineries. He compares the growing vineyards of Pennsylvania to established Napa Valley of California. Napa Valley is one of California's top tourist attractions because its visitors love to experience the country and to taste the wine. With continued growth, Pennsylvania's vineyards can compete with California's Napa Valley both in local tourism and national sales. This expansion will contribute to the rural economy by creating local jobs and will preserve farm land that is currently threatened, both of which are high priorities for the state. Chien feels that there will be a time when larger businesses and corporations will show interest in wine production, enabling Pennsylvania wines to be exported internationally. However, for now, the wineries and vineyards in Pennsylvania remain family owned and operated—using only Pennsylvania-grown grapes. 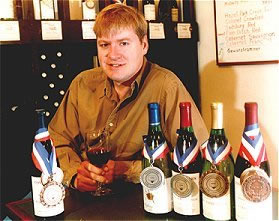 Joal E. Wolf, president and general manager of Conneaut Cellars Winery in Conneaut Lake, anticipates competition for Pennsylvania wines in the future marketplace. He says that the "market will eventually become saturated, the industry will mature, grape selection will narrow due to economics and better science, and, eventually, Pennsylvania and other Eastern wineries will be discovered when wine writers become bored." The employees of Evergreen Valley Vineyards in Luthersburg feel that the future of Pennsylvania wine is contingent on government support, commenting that it "depends on the political climate more so than the natural one."

Wine production and consumption has a long, cherished history in Pennsylvania. It will continue to inch toward finding great success competing in both the national and international wine markets. In the future, more Pennsylvania wines will become available in local liquor and bottle shops. Although definite success is contingent on many factors, the future of the Pennsylvania wine industry is ripe. Raise your glass and toast to this success!