The Duquesne Incline: An Historic Artifact on the Rise 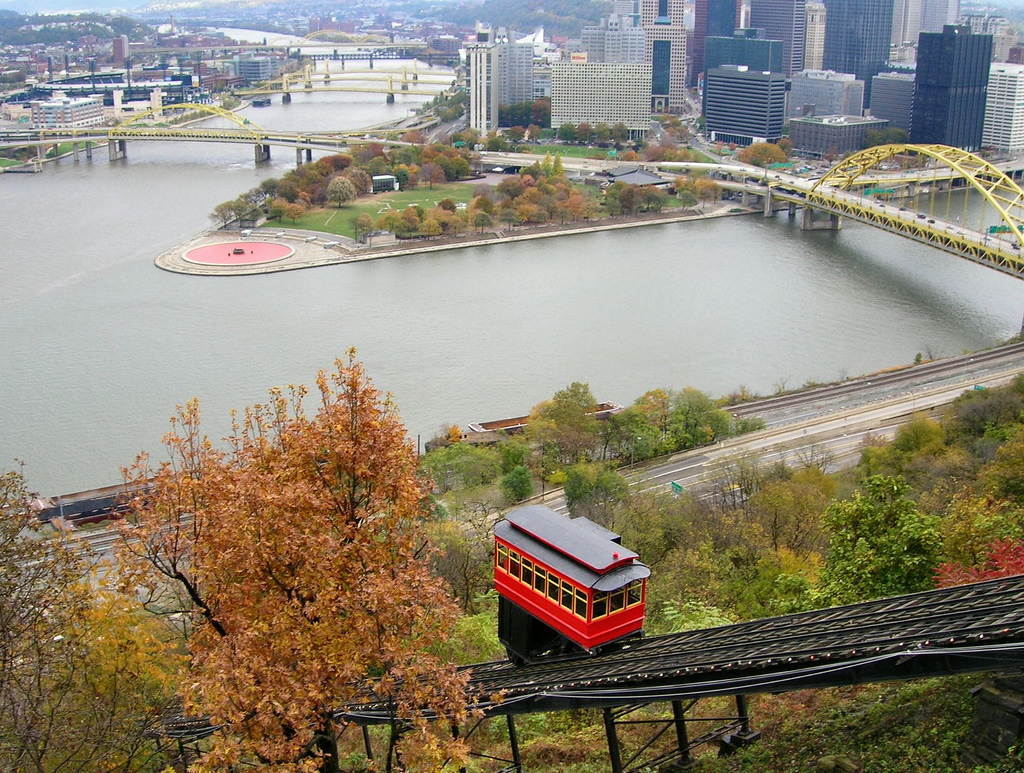 Chris Iori
The view of the Point from atop the Incline can be magnificent.

For 120 of Mt. Washington’s residents, rush hour commuter traffic is something unheard of. With no need for roads, buses, or cars, these travelers are able to by-pass the morning and late afternoon headache brought on by bumper-to-bumper traffic. Every day, these men and women make the journey from Grandview Avenue to Carson Street by incline.

An incline, also known as a funicular, is a type of railway used to move passenger or freight cars up and down steep slopes. The cars or cabins are able to move the lengths of the slope by means of two cabins that compensate for one another’s position as a cable linking the two turns on a pulley. As one cabin ascends the angled landscape, the other cabin simultaneously descends. The invention of funiculars proved to be quite practical, particularly during the 19th century, at the dawn of the industrial era.

The 1860s were marked by progress and expansion for the city of Pittsburgh. Newspapers called out to men across the country for the opportunity to be a part of the rapidly expanding steel industry. As the prospect of work drew laborers and immigrants to the area, the demand for housing increased. Pittsburgh’s flat lands were mostly unavailable due to their use in industry. As a result Mt. Washington, formerly known as Coal Hill, was quickly inhabited by laborers and their families.

Pittsburgh’s surrounding hillsides had been established as an excellent location for the individuals working in the river valley below. However, the commute to and from work had proven to be difficult at a time when roads and public transportation were practically fictional. Every day, workers made the trip to and from Pittsburgh’s river valley by foot. The workers, mostly German immigrants eventually proposed the construction of Steilbahns, or inclines, along Coal Hill to make the area more accessible to its inhabitants.

Detroit Publishing Co., Library of Congress
This early picture of the Incline shows just how arduous the trek up the mountain would be for workers after a long day in the factories.

The incline was one of four, including the Monongahela Incline, that ascended what is now known as Mt. Washington. For the sum of $47,000, Samuel Diescher, designed and built the incline and many of those that followed, working under Kirk Bingham and Associates. The original incline was constructed of wood and iron and powered by steam engine. Each car was designed to carry a total of twenty-five passengers a total length of 793 feet and rise of 400 feet in approximately two and a half minutes. Despite the difficulties of financing its construction and multiple delays, on May 20, 1877 the Duquesne Incline was successfully opened for business. The following day The Post reported, “From early morning until a late hour in the night the cars were literally jammed with passengers.”

After its opening, riders were charged five cents per trip to ride the incline. Regular riders were provided with a rectangular, yellow commuter ticket with the numbers one through thirty-nine printed on the front. With each successive ride, the conductor would punch a hole in the ticket. Once the commuter reached forty trips, the rider exchanged the old ticket for a new one. Travel by incline was a fairly inexpensive way for commuters to travel and by the 1940s yellow commuter tickets were sold for a dollar, averaging a cost of two and a half cents per trip. Although the incline was an economical way to travel, the appearance of roads and the invention and popularization of the motorcar lessened the need for its use. Of the seventeen inclines that once graced Pittsburgh’s hillsides, the Duquesne Incline is one of only two that remain in the city today. 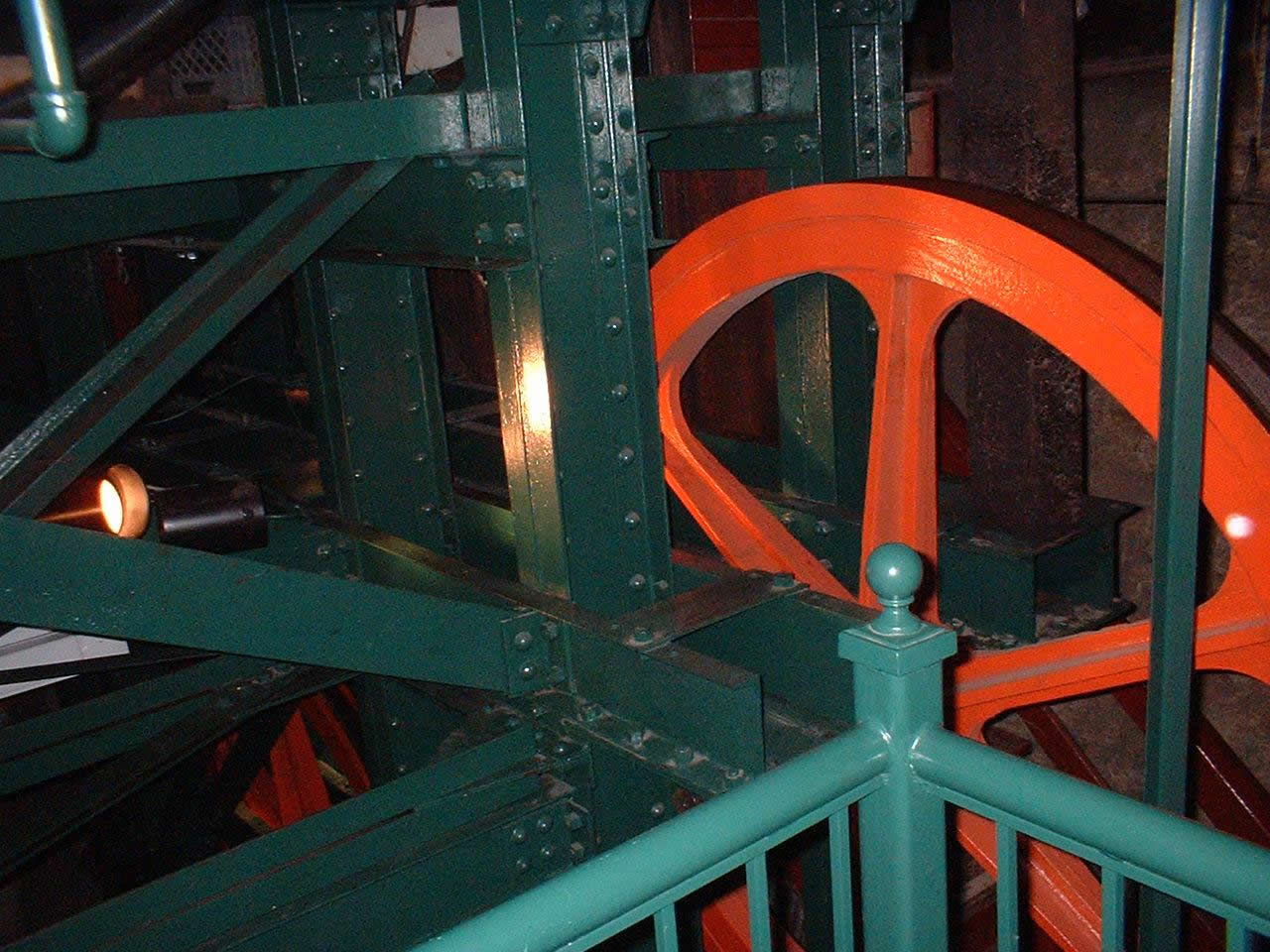 Brent Moore
This large wheel helps helps turn the gears that pull the cars up the mountain.

The closing of the incline caused a stir amongst the residents of Mt. Washington. The community felt the loss of a convenience they had once taken for granted. Although roads and cars were the primary form of transportation, the Incline was still the fastest means of travel to Pittsburgh’s downtown area. As Ann Brown of Mt. Washington remarked in the Pittsburgh Tribune-Review, “You can’t beat it.” Consequently, a small group of men led by David Miller joined together with the objective or preserving one of the area’s most prized historical artifacts. Eventually the group was able to establish an agreement with the owners to fix the Incline if sufficient funds were raised to meet the cost of the repairs.

The community quickly set to work in order to raise a total of $15,000 to meet the cost of the necessary repairs. Bake sales and one dollar souvenir tickets were sold from door to door as a means to raise funds. To raise awareness within the community the Boy Scouts did their part by distributing fliers to various households. Eventually, shares of stock were made available for sale in The Duquesne Incline Company. As funds accumulated, local members of the group began the restoration of the Incline by making whatever repairs they could themselves. After several months of fund-raising and hard work, the Duquesne Incline was proudly reopened on July 1, 1963 and has remained open since with the support of the community. David Miller’s wife, Ruth, later remarked in the Pittsburgh Tribune-Review on the importance of the rescue efforts, “It’s a very important facility for few people.”

Almost a year after its rescue, the Duquesne Incline was purchased by the Port Authority of Allegheny County. The Authority was required to purchase all forms of mass transportation due to the passing of the Second Class County Port Authority Act of 1959. The goal of this was to provide a publicly-sponsored transportation system for the residents of Allegheny County. Under the ownership of the Port Authority, operation of the Incline was not believed to be cost effective, increasing the probability that it would be shut down for a second time. To avoid this, the Port Authority leased the Incline to the group of individuals responsible for its rescue for the modest sum of one dollar per year which was and still is returned to the Incline annually in the form of a donation. 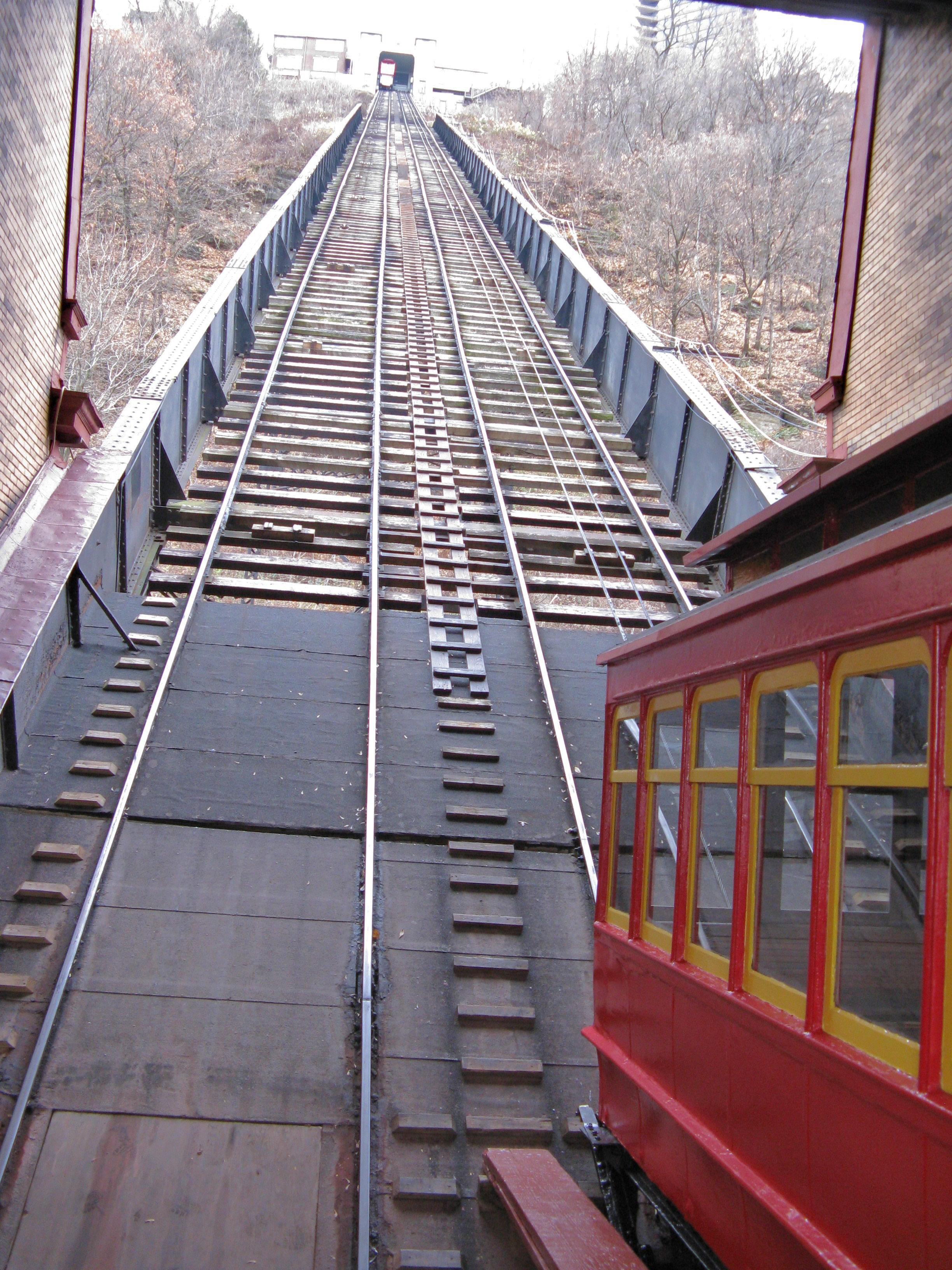 Travis S
The cars at the Duquesne Incline are pulled up a 30 degree slope.

The year following the Incline’s reopening, the Society for the Preservation of the Duquesne Heights Incline was formed. The Society is a non-profit, self-sustaining organization responsible for the operation and maintenance of the Incline and has assumed full responsibility of the Incline’s operation for the past forty-six years. While officers for the Society are volunteer members of the organization, maintenance staff and conductors are paid. The Incline is able to annually make a profit and is able to continue the improvement of operations through grants, corporate, and private donations.

Today, the Incline operates as both a working museum and as a method of transportation and only differs slightly from the original Incline as it was constructed in 1877. In 1932, the original steam engine was replaced by an electrical one which was replaced once again by Westinghouse forty years later with a more modern, low-maintenance electrical system. With the most significant change being the driving force behind the Incline, much of the original equipment remains the same. The original cast-iron drum carrying two steel-wire cables is still responsible for pulling the cable cars up and down the lengths of Mt. Washington. The safety cable and air-break are also still used today as a precaution in the event that the working cable breaks. An additional safety feature of the machinery which was not part of the original workings of the Incline is the backup diesel generator which was added as a means to dealing with temporary power outages.

More than a century after its opening, the Duquesne Incline remains a popular tourist attraction as well as a method of transportation for some commuters. Although paved roads and access to alternative forms of transportation discourage its use, the Incline is provides a unique experience for tourists visiting the city of Pittsburgh. The striking view of Pittsburgh’s skyline is best seen from the top of Mt. Washington and is something made available to all who ride the Duquesne Incline. Of the twenty inclines remaining within the United States, five can be found in Pennsylvania, including the famed Duquesne Incline. For a modest fare of two dollars, the Incline is made available for all to enjoy three-hundred-sixty-five days of the year.