The ground is holy where they fell
And where their mingled ashes lie,
Ye Christian people mark it well
With granite column strong and high;

And cherish well, forevermore,
The storied wealth of early years,
The sacred legacies of yore
The toils and trials of pioneers. 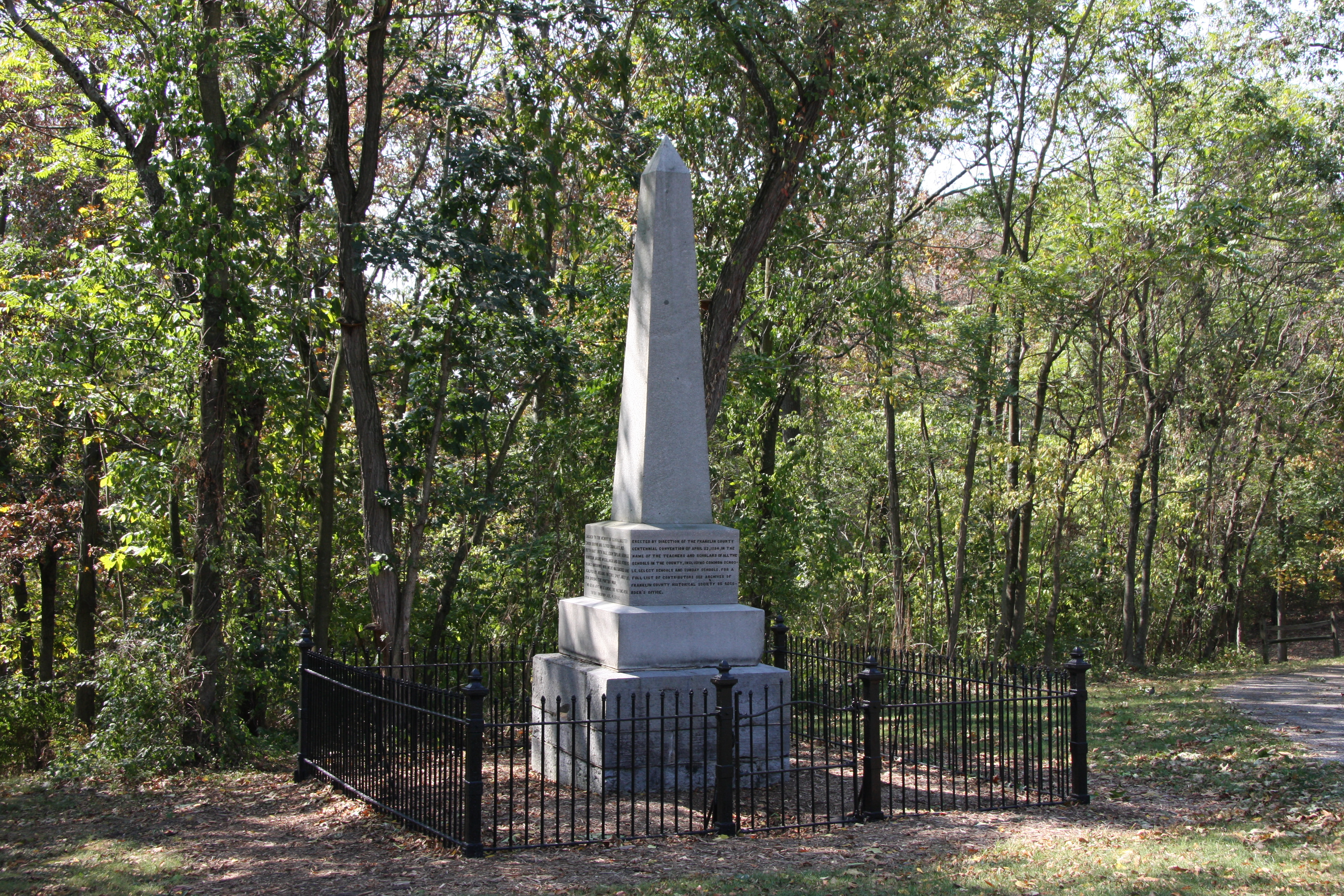 Ken Shockey, Antrim-Allison Museum
Enoch Brown and his students are memorialized at this Antrim Township site in Franklin County.

Nestled in the heart of Antrim Township, Franklin County, is a monument memorializing Pennsylvania pioneers and the “toils and trials” eleven early settlers endured. The monument marks the spot where schoolmaster Enoch Brown and ten of his students were brutally killed in a massacre that historian Francis Parkman called “an outrage unmatched in fiendish atrocity through all the annals of war.”

The massacre of Enoch Brown was not the first attack on English settlers by Indians in Pennsylvania, but it was, however, the most gruesome. Indian resistance began to increase as more white settlers immigrated into Pennsylvania during the 1750s. Pioneers in Antrim Township fell victim to many of these Indian raids. In 1756 two young brothers, James and John McCullough, were abducted from their home and used as slaves. Later that same year, the Indians savaged the home of the Walker family that lived near Muddy Run in Antrim Township. The father was killed and the five children were captured. The Indians set fire to the house and then later killed the oldest and youngest children. 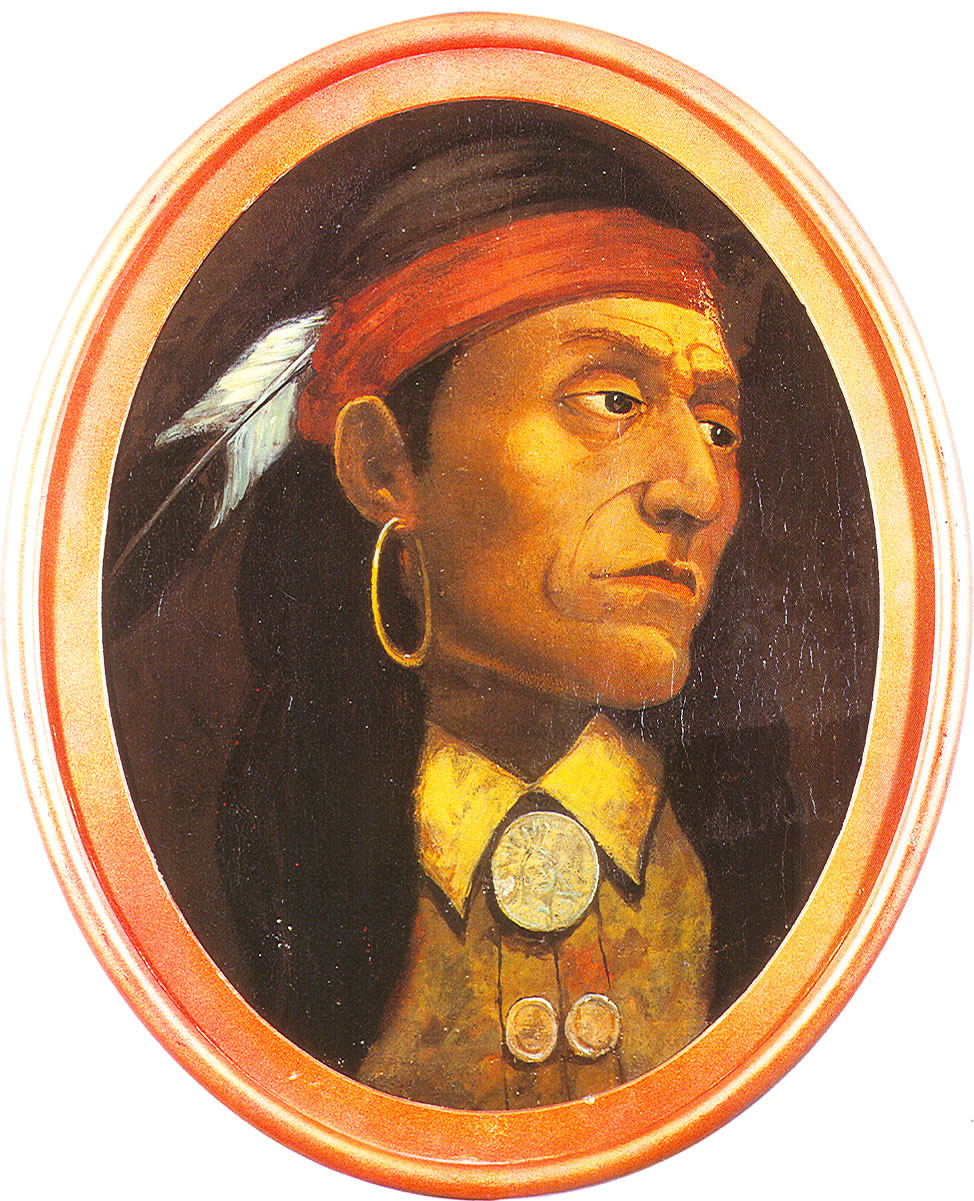 It was 1763 and the beginning of Pontiac’s War. Pontiac, chieftain of the Ottawa Tribe, traveled from Detroit to Pittsburgh, slowly attacking the small colonies of Americans who had settled in lands promised to remain in Indian hands by the British Crown. In an attempt to stop the Indian raids, Col. Henry Bouquet gathered together a small army and defeated the tribes who had been attacking the western Pennsylvania area. Consequently, Col. Bouquet’s attempt to end the attacks sparked a major retaliation by the Indians across the American settlements in Pennsylvania, Maryland, and Virginia.

That was not the only reason why the Indians decided to retaliate against the English settlers. Governor John Penn of Pennsylvania announced a “promise of bounties to be paid to the white man for Indian scalps.” The Paxton Boys, a white gang in the Dauphin County area, considered this “bargain” issued by the governor and went on a rampage killing six Indians one day and fourteen another. Eventually, they would entirely wipe out the Conestoga tribe. The Indians fought back by killing and scalping anyone across the colony of Pennsylvania, disregarding age, gender or condition.

On the morning of July 26, 1764, a group of Indians made their way into the Cumberland Valley. Three miles north of what is today called Greencastle stood a small schoolhouse where Christian schoolmaster Enoch Brown and eleven of his pupils were preparing to start the day. Shortly after they began, three warriors rushed into the schoolhouse, capturing Enoch Brown and the eleven students. Two Indians guarded the door while the other clubbed the schoolmaster and ten students before scalping and leaving them all dead. One student, Archie McCullough was scalped but the Indians did not realize he had not been killed. He hid in the fireplace inside the schoolhouse for some time before making his way to the nearest spring. There he washed his head before a nearby neighbor to the school found him. Archie lived to be quite old; however, he was mentally scarred from that day on. According to Archie’s story, “two old Indians and a young Indian rushed up to the door soon after the opening of the morning session. The master, surmising their object, prayed them only to take his life and spare the children, but all were brutally knocked in the head with an Indian maul and scalped.” Farmers who had been concerned with the silence surrounding the schoolhouse discovered the bodies of Enoch Brown and his ten students a few hours after the attack; but days would pass before the people of Antrim Township lay the bodies to rest. 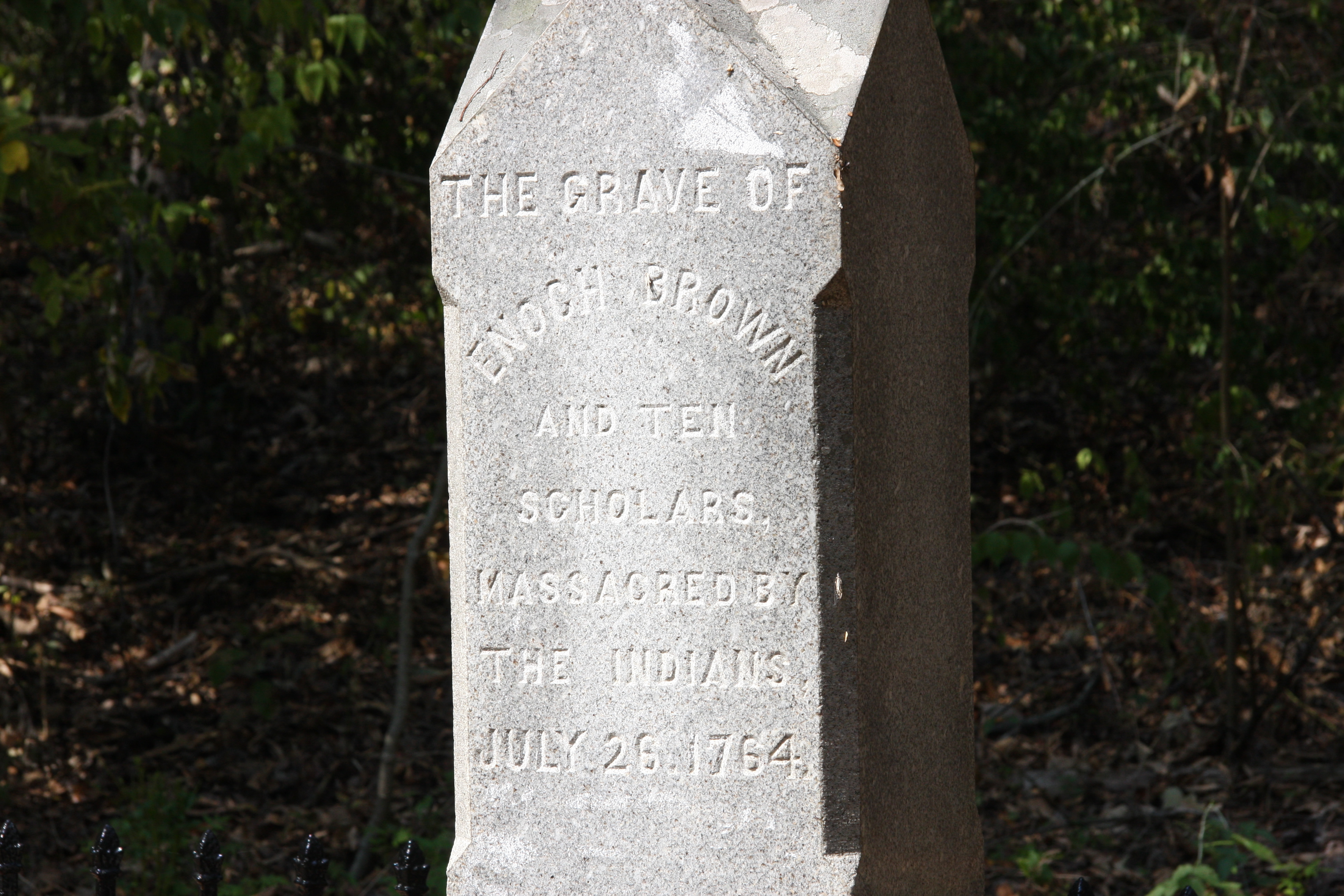 Ken Shockey, Antrim-Allison Museum
This headstone lies above the actual burial site of Enoch Brown and his students.

On a solemn day, the settlers gathered together and placed the bodies of those killed alternately head to feet in one large wooden box. They later buried them in an unmarked grave a few yards away from where the slaughter originally occurred. For years this story was told and considered a legend by many, due to the fact there was no identifiable grave near the schoolhouse. However, one curious man was told the story as a boy and it prompted him to search for the unmarked grave.

Many years later, when he was a boy, General David Detrich was introduced to Mrs. Betty Hopkins who would tell him the story about the terrible tragedy that occurred not even a mile from her home. Mrs. Hopkins was a widow who lived in a small house near the school. Her windows were covered with wooden boards, so it appeared that the house was deserted. On the day of the attack, the Indians passed by her home and never bothered to look inside because they believed no one resided there. After being acquainted with Mrs. Hopkins for twenty years, General David Detrich put her to rest at the age of 104. General Detrich and another community member A.B. Rankin worked closely together after the passing of Mrs. Hopkins to prove whether or not the story young David had been told was the truth. Almost eighty years after the attack, A.B. Rankin led the people of Greencastle in an investigation to uncover the grave of Enoch Brown and the ten students. He and twenty other citizens conducted a dig hoping to find a burial site. After the first excavation, the remains of one adult and ten students were indeed found in a common grave.

Ken Shockey, Antrim-Allison Museum
The East Side of the Monument preserves the names of many of the victims of the July 26, 1764 massacre.

After the grave had been discovered, the then owner of the land, Christian Hoser, planted four locust trees to mark the site. Forty years later, during the spring of 1883 these trees were cut down. Fearing the site would be forgotten, three men, Col. B. F. Wenger, Gen. David Detrich and Rev. Cyrus Cort, visited the site and proposed to purchase the land and erect a monument. It was not until 1884 during the Franklin County Centennial Convention that this proposal was considered. During the session, plans were developed to raise money to build the monument. An abstract from the actual meeting report found in the Memorial of Enoch Brown states the following:

Your committee appointed to prepare a proper plan for securing permanent results from the Centennial Celebration in the shape of a Monument to the memory of Schoolmaster Enoch Brown and the ten school children massacred by merciless savages, July 26th 1764, respectfully report the following for the consideration of this convention: Resolved, That sum of at least two thousand dollars be raised for the purpose of securing a suitable amount of land on the farm of Capt. Jacob Diehl, in Antrim township, including the spot where Schoolmaster Brown and his ten children were massacred by the Indians, July 26th 1764, and where they are now buried; and of enclosing the same with a suitable fence and likewise of erecting an appropriate monument to their memory and keeping the same in permanent repair.

The official dedication ceremony occurred on August 4, 1885. The two days prior to the event were filled with rain and the committee members feared that the day of the unveiling would be much like those prior. To their surprise, however, it did not rain and the people of Antrim Township were blessed with a gorgeous day. About one hour before the ceremony was to begin, approximately five thousand people filled the area. Col B. F. Winger called the meeting to order, and later allowed Rev. Cyrus Cort to make a few remarks before nine boys and four girls pulled the red, white and blue cords to unveil the marvelous monument. 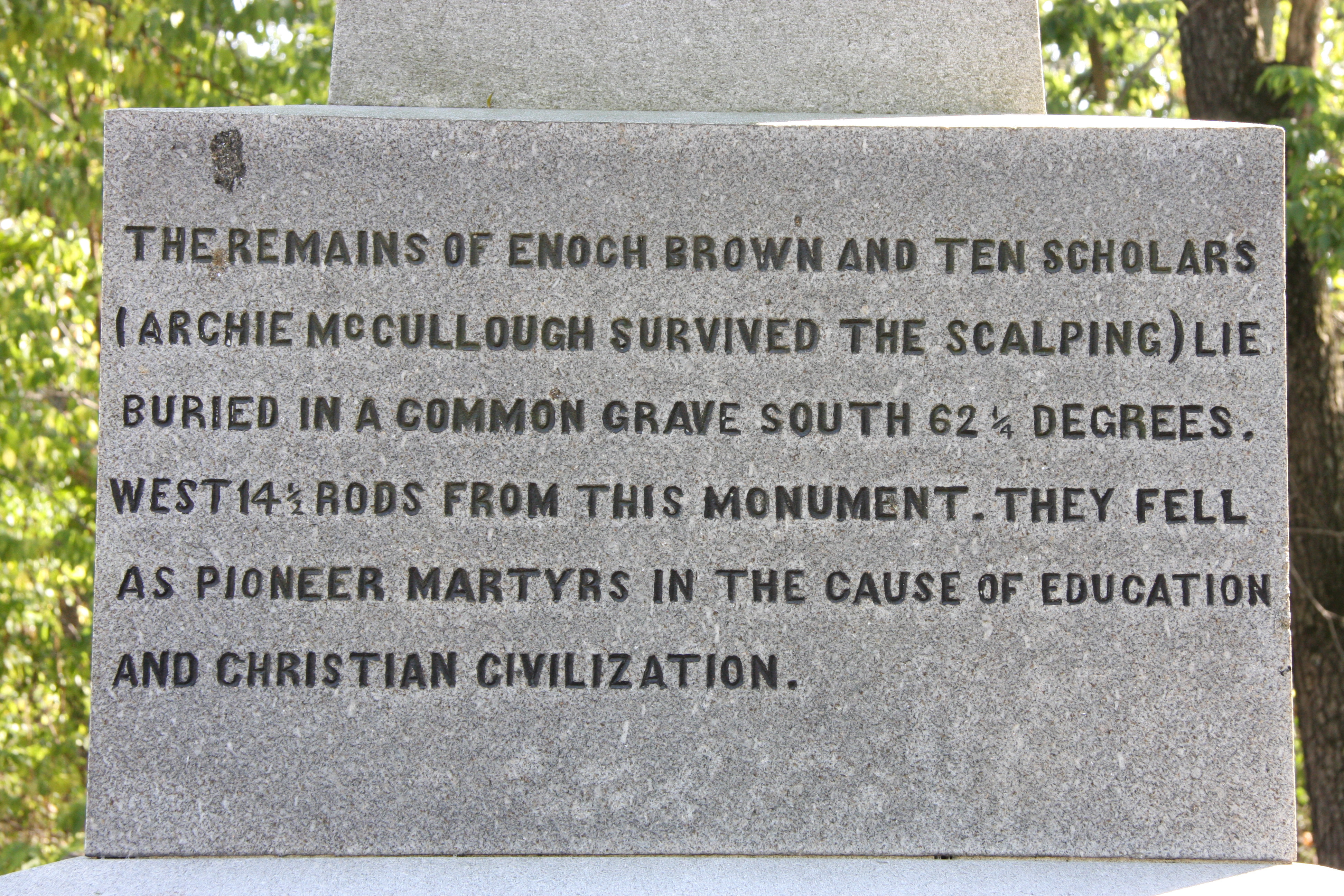 Ken Shockey, Antrim-Allison Museum
The West Side Inscription explains the exact location of the bodies with relation to the monument.

Each side of the monument had an inscription to remember Enoch Brown and his ten students. The east side of the monument listed the names of those killed. The north side commemorated those who made donations for the park. The west side told where the remains of those killed were placed, and the south side contained a poem dedicated to those massacred.

Today, that monument still stands to remind the citizens of Greencastle how brutal life had been during the early pioneer times. David Dixon, author of Never Come to Peace Again, claimed this time as a period of “war without mercy.” In many ways and on all sides, this was, indeed, true. Franklin County’s Enoch Brown Monument captures the memory of but one incident of that bloody time.

The Center would like to thank Ken Shockey of the Antrim-Allison Museum in Greencastle for his help in illustrating this story.