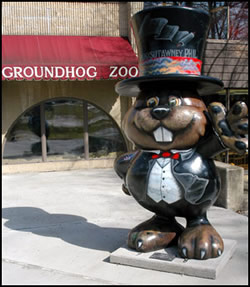 Kelly Porada
Punxsutawney Chamber of Commerce
Statue of "Phantastic" Phil, one of a series.

On most days the town of Punxsutawney, about 80 miles northeast of Pittsburgh in Jefferson County, reposes peacefully among the hills astride the Allegheny and Susquehanna rivers. Its roughly 6,800 residents go about their day, which the Chamber of Commerce says now often revolves around manufacturing and the service industry rather than the coal mining that sustained the town for so many years. Neighbors greet one another as they shepherd children to school or head to work. Punxsutawney is small town America. Each February, however, the population swells to 30,000 and the sounds of revelry fill the air.

It's time for Punxsutawney Phil, the weather-predicting groundhog, to wake.

The celebrations center on Phil's February 2 prediction. The gates of nearby Gobbler's Knob hill open at 3:00 a.m. to let in the throngs of people who either walked the one and a half miles from town or paid five dollars to take a shuttle. The participants enjoy live music and warm food. 6:30 a.m. fireworks signal that the year's unveiling of Punxsutawney Phil, Prognosticator of Prognosticators, approaches. As dawn breaks, a group of men in top hats and dark overcoats, representatives of the Inner Circle of the Punxsutawney Groundhog Club, ascend a hilltop stage. The crowd hushes and the music stops.

At about 7:25 a.m. the president of the Inner Circle pulls Phil out of his temporary home, a false tree stump. He sets Phil down, who then looks for his shadow. Upon completion of this ritual he whispers directions in Groundhogese to his handler, who selects the verdict from pre-written poetic scrolls. The president reads Phil's chosen scroll to the crowd and gathered television cameras. It forecasts either an early spring if Phil did not see his shadow or six more weeks of winter if he did. The crowd cheers regardless, and the celebration resumes until the end of the day.

How and why does rural Punxsutawney (pronounced PUNG-suh-taw-nee, and shortened to Punxsy by the locals) transform into a short-lived festival town? How did a groundhog become a vibrant part of American pop culture? The roots of the answer bridge centuries and thousands of miles to early European Christians.

Spring festivals were common in this time and place, according to Wendie Old, author of The Groundhog Day Book of Facts and Fun. People celebrated the end of the cold or dry period, or welcomed the beginning of warmer, wetter weather. Prior to the spread of Christianity, Irish Celts celebrated Imbolc halfway between the winter solstice (around December 21) and the spring equinox (around March 21). The festival usually fell on February 1 or 2, the same time as Groundhog Day in modern times.

The Celts dedicated Imbolc to Brigit, goddess of poetry, home crafts, fire, fertility and healing. Pleasing her with the festival helped prepare the way for spring. Conquering Roman legions spread the belief to other Europeans, including the Teutonic Germans whose ancestors would later become the first white settlers of Pennsylvania, according to Groundhog.org, the official site of the Punxsutawney Groundhog Club. Successive waves of cultural diffusion brought Christianity, and with it a reinterpretation of Imbolc. The holiday became known as St. Brigit Day, and eventually Candlemas. Clergy blessed candles and distributed them to the people, who placed them in windows to ward off winter and beckon spring.

The celebrated day carried its own significance for the earliest English to practice Candlemas. According to one song:

If Candlemas be fair and bright,
Come, Winter, have another flight;
If Candlemas brings clouds and rain,
Go Winter, and come not again.

The Teutonic Germans who adopted it, however, added the belief that if the Candlemas sun caused an animal (usually a bear or hedgehog) to cast a shadow six more weeks of winter were sure to follow.

For as the sun shines on Candlemas Day,
So far will the snow swirl until the May.

Germans brought the centuries-old tradition to Pennsylvania. The shortage of hedgehogs and abundance of groundhogs prompted them to accept the latter as a worthy replacement. Groundhogs, also known as woodchucks, marmots or whistle pigs, were and still are common throughout the United States eastern woodlands, Canada, and Alaska. Settlers found them capable animals.

Wendie Old asserts that the first documented evidence of the tradition's formal celebration in Punxsutawney appeared on February 2, 1886, when Clymer H. Freas, city editor of The Punxsutawney Spirit, wrote, "Today is Groundhog Day and up to the time of going to press the beast has not seen its shadow." The previous year Freas has written about a group of men who hunted and cooked groundhogs. He named them the Groundhog Club, and dubbed their particular weather-predicting groundhog "Punxsutawney Phil." 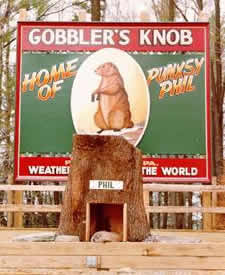 1887 marked the first year the club held the prediction on Gobbler's Knob. The actual predication was made in secret and announced to the public, a practice that continued until 1966, when an audience was allowed for the first time. Since then its popularity has only grown, bolstered by the 1993 movie Groundhog Day with Bill Murray and other media exposure. Punxsutawney Phil has even made appearances on the Oprah Winfrey Show, met with President Reagan, and boldly predicted with Pennsylvania Governor Ed Rendell in the crowd.

Phil's rising fame ran parallel with the expansion of the festival itself. Festivities now open on February 1. The Buffalo News reported on several events visitors can take part in on the day before the actual prediction, including the Punxsy Phil Anything Goes Chili and Hot Wing Cook-Off and the Prognosticator's Ball.

The actual prediction on February 2 naturally draws the most visitors. The day also offers a chance to take the Phantastic Phils Bus Tour, which conducts people through a tour of 22 6-foot-tall fiberglass groundhogs scattered across town, each uniquely designed by a local artist.

From February 2 to 3 one can also go on a Hayride Town Tour. Starting from the Punxsutawney Historical and Genealogical Society building, the wagon snakes through the town while guides discuss the area's history. 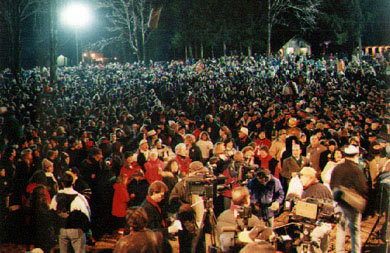 Punxsutawney Groundhog Club
Some of the roughly 30,000 people who gather on Gobbler's Knob every February 2.

Mayor James Wehrle told The Buffalo News that Punxsutawney is "the friendliest town on Earth, and volunteers are ready to show people a good time and unique experience. It is what small town life is all about." These three bustling days are quite a departure from the normal routine, but Phil and the locals make the most of it. The rest of the year the townspeople exemplify small town American life, and Phil resides in Groundhog Zoo, a glass home by the town's Barklay Square, with his wife and two children.

Many Punxsy locals claim that the present Phil is the same groundhog that made the first wintry forecast in 1886. Legend has it that he drinks a secret concoction every summer that allows him to live an additional seven years, according to Groundhog.org. There have actually been several who fulfilled the duties, although each of them bore the same name.

Many locals also claim that Phil has never made an incorrect prediction, although The Groundhog Day Book of Facts contends that a study undertaken by the United States National Oceanic and Atmosphere Administration found that he has historically been right only one out of three tries. Phil sees his shadow 90 percent of the time, meaning winter should theoretically last another six weeks. A sunny day in February is usually due to cold and dry weather; warmer days mean more moisture, which results in clouds and hence no shadow. Apparently this logical sequence doesn't always hold true.

Regardless of the groundhog's true predicting prowess, Punxsutawney Phil and Groundhog Day form unique adornments on the country's cultural tapestry. They have spawned imitators such as Staten Island Chuck, General Beauregard Lee in Georgia, and even other weather animals like Furky the Wonder Chicken in Vancouver, Canada. However, 120 years after pioneering the craft, Punxsutawney Phil remains the quintessential weather animal, the Seer of Seers, Prognosticator of Prognosticators.