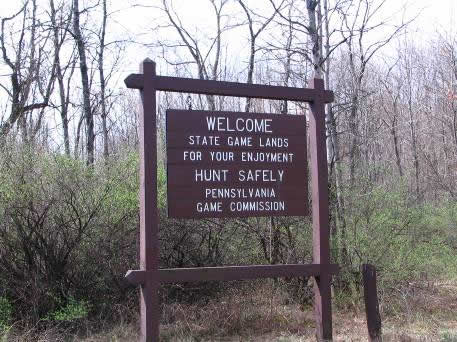 Mark Hughes
The Scotia Barrens is an inviting wilderness area, reclaimed by nature after years of mining.

When you hear the name “State College,” the first thought that comes to mind probably connects to Penn State University. Penn State so dominates Centre County and the region that many do not know what the surrounding area has to offer. But central Pennsylvania has many unique and very interesting natural features not found in other areas of the state or even in surrounding states. Being in the center of the ‘ridge and valley’ section of Pennsylvania, the immediate area around State College can be a wonderful place to pursue many outdoor activities. Fishing, hiking, and hunting are just a few fun recreational activities the area offers. The tract of land about four miles northwest of State College known as State Game Lands 176, also called “The Scotia Barrens,” is a physical oddity that can be found among the many mountainous regions throughout the world. Areas like it are known as “pine barrens.” The term “barren” does not imply that the area is bereft of life or vegetation; it really has lots of life and diversity.

People going to the Scotia Barrens definitely see a noticeable change in climate and vegetation type. The Scotia Barrens are what is often referred to as a “frost pocket.” This phenomenon happens when the currents of air blow down from the ridge tops and get trapped in a lower lying area. It has a special microclimate and is usually cooler than the surrounding areas but at times can be very hot and dry as well. A great example of this harsh climate is in the mornings it may be near freezing an get up into the high 70’s to lower 80’s during the day.

Keith C. Heidorn, Ph.D.
The Scotia Barrens has its own microclimate, as seen in this diagram.

The soils found in barrens play a big role in the type of vegetation that is found. The soils are typically very infertile, well-drained sand with a relatively acidic pH. There is little to no organic matter found in the soil, so their water-retaining ability is very low, causing drought like conditions in many places. With this special soil type the only species that can grow there must be very tolerant to poor soil conditions and drought. As for trees, several types of pine grow there, including pitch pine, jack pine and white pine. Many different types of oak species also occur in the barrens such as black oak, white oak, and the small scrub oak which act as a thick understory in some areas. Some native grasses resembling prairies or oak savannas also grow in the barren areas.

The Scotia Barrens is teeming with wildlife. On a given day walking through ‘the barrens,’ you might encounter White-Tailed deer, Ruffed Grouse, many different types of song birds, birds of prey, the occasional North American Woodcock, Black Bears, and many other animals. The Pennsylvania Game Commission bought the land in 1973 and named it State Game Lands #176. The Game Commission has recently lifted a no hunting policy on our state bird, the Ruffed Grouse, in a portion of the game lands. This was a study to see if habitat improvement and no hunting pressure would improve overall ruffed grouse numbers. The Scotia Barrens has been home to many ruffed grouse and much of the surrounding forest is also actively managed for wildlife habitat improvement. Many Penn State students assist workers from the PA Game Commission in yearly Ruffed Grouse population counts. 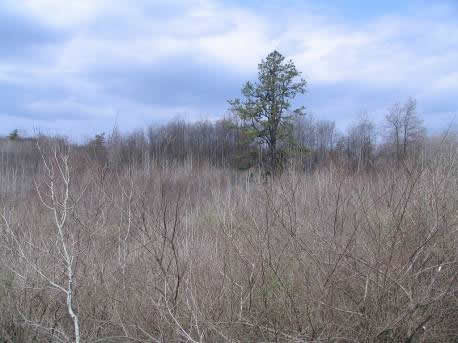 Mark Hughes
A Pitch Pine grows among the scrub oaks that make up the underbrush in the Barrens.

Pointing dog field trials are also run in this area. A field trial is a simulated hunting situation where the hunting dog shows his ability to find Ruffed Grouse or American Woodcock, both of which are ground-dwelling game birds. Some of the different clubs that are involved in running trials in the area are The Nittany Valley Bird Dog Club, the West Branch Field Trial Club and a few pointing dog championships have been run in the Scotia Barrens. Those include the Grand National Grouse and Woodcock Invitational and the Ontario Grouse Dog Championship.

The Scotia Barrens has a lot more to offer recreationally. As a green space close to an urban area, it offers numerous hiking, jogging, biking, and hunting opportunities. The shooting range offers one the opportunity to work on his or her shooting ability. It is also a great place to just go for a ride to get out of town.

The Barrens haven’t always been so tranquil, however. Steel industrialist Andrew Carnegie had a great interest in the area, took a 99 year lease on about 300 acres and purchased about 400 more acres. His interest in the area was focused on iron ore. It had come to Carnegie’s attention that several small charcoal operations were located in the area. He used this naturally occurring mineral to make steel in his mills in Pittsburgh. The area where his mine once was, is now the Scotia Shooting Range which the PA Game Commission maintains for public use. Due to the proximity of the Pennsylvania Railroad, the mine got off to a good start. The closest rail station was in Julian and the first several thousand tons of iron ore were carted over the rough roads to the rail line by mule driven carts. 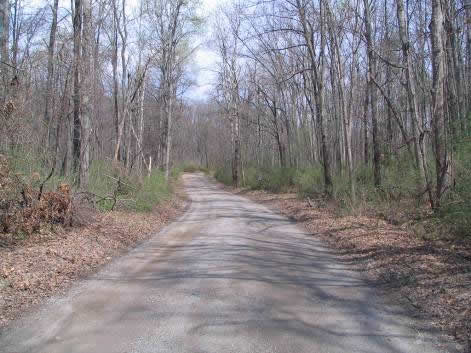 Mark Hughes
This road leading into the Barrens used to be the railroad grade that was the town's lifeline.

The road that now leads to the shooting range is actually an old railroad grade. This railroad was eventually connected to the main line of the Pennsylvania Railroad and took 250 tons daily of Patton Township iron ore to the steel mills in Pittsburgh. The small fires from the steam engines caused small surface fires that would burn back the vegetation from the track. Evidence of this can be seen at virtually any disused railroad grade around the state. In the Scotia Barrens, the plant types found near the road are often Pitch Pine and scrub oak. The Pitch Pine is a fire-dependent species having serotinus cones. These cones need small hot surface fires to open up the cones and spread the seed into the soil. As a result, some of old railroad grades in the Scotia Barrens tend to look like old, overgrown farm fields populated by typical disturbance species of the area.

The town of Scotia, named for Carnegie’s homeland of Scotland, has long since suffered the same fate as many other small logging and mining towns that at one time dotted central Pennsylvania. Today, the only remains are parts of foundations and a few buildings in ruins. At the turn of the twentieth century, however, Scotia was a bustling mining town of some 400 people complete with a school, a church, and even a civic center that housed a small library. The town grew from humble roots into a fine place to live. On summer nights, the town’s baseball team would provide recreation for the people, and the town’s band, the Forest Cornet Band, would provide entertainment. Carnegie always made it a point to visit and, according to accounts from the day, loved when the band would give him a cadence in the parade welcoming the “Big Boss” to town. 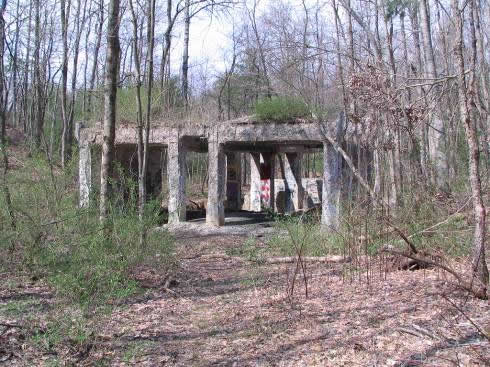 Mark Hughes
After the mine petered out, the town of Scotia had not long to live before nature's reclamation would begin.

Sometime about 1890, Andrew Carnegie saw that the iron ore from the Scotia mines was quickly being depleted and he lost interest in the area. He still made occasional visits but eventually sold the town and the mine to the Bellefonte Furnace Company which mined iron ore until 1911. From that point, the town slowly faded into the history books. There was a brief moment around WWII where there was an attempt to mine again, but it was an utter failure.

The old town and mines are not easy to find these days but evidence of their existence is hinted at in tree species that you normally would not find in Pine Barrens areas. Black walnut, for example, is a great clue that you might be in the area of the old town, because this tree species does not normally grow in the natural forest, but was a popular ‘planted’ tree in a town. Another tree that stands out is the giant catalpa tree along the road just before you enter into the game lands. If you know where to look, you might find some old foundations and other ruins. Parts of the old town are actually just meters from the road, but if you don’t pick up on the clues you’ll miss them.

The Scotia Barrens is a very interesting and great place to explore. It has a rich history and their always seems to be something going on, whether it be someone shooting their rifle at the range, or someone hiking the road for an afternoon walk. This great area lets you explore the wonders of Central Pennsylvania from a comfortable base. Who knows? Maybe you will get lost in the wonderment of the Barrens.

The Center would like to thank Keith C. Heidorn at the Weather Doctor for his assistance illustrating this article.