Jutting out from the Lake Erie coastline, Presque Isle State Park holds a treasure trove of pleasures for just about anyone. For the history-buff— a natural record dating back 11,000 years and a site of military importance in the Battle of Lake Erie. For the sports-enthusiast—fishing, hiking, boating, hunting, world-class bird watching, and more. For those who enjoy relaxing—thirteen beautiful beaches stretching over four miles. With the diversity of its natural resources and historical importance, Presque Isle manages to entertain or enlighten visitors of all shapes, sizes, and interests.

Presque Isle is one of Pennsylvania’s 120 recognized state parks. It is a peninsula that extends into Lake Erie, covering over 3,200 acres of land. The peninsula sweeps northeastward, surrounding Presque Isle Bay along the park’s southern shore. It has 13 miles of roads, 21 miles of recreational trails, 13 beaches for swimming, and a marina with over 500 boat slips. The park is recognized as a National Natural Landmark and has been recognized by the Pennsylvania Bureau of Parks on its list of “Twenty Must-See Pennsylvania State Parks.” PA DCNR
Satellite imagery of Presque Isle shows traces of the continuous movement of the land over thousands of years.

Scientific evidence shows that Presque Isle was formed about 11,000 years ago at the end of the Wisconsin Glaciations. Over time, the coastline “floated” as the forces of wind and water carried sand from the neck of the peninsula eastward, depositing it at the tip, Gull Point, causing that area to grow. This growth and migration of the peninsula occurred relatively rapidly, and scientists believe it has grown eastward one-half mile per century, although they see smaller changes every year. These changes created an extremely diverse and fragile environment. Because of its diversity, Presque Isle is a natural laboratory for viewing the geologic past and watching geologic forces in motion.

According to legend, the first inhabitants of Presque Isle were lured in by “The Great Spirit.” The Eriez Indians, after whom the city, lake, and county were named, were led by “The Great Spirit” to the peninsula because of the abundance of game, pure water, and the cool, health-giving breezes “coming from the land of snow and ice”—Canada. The Eriez Indians are believed to have lived and farmed on the peninsula for several years.  They fought numerous wars, the last starting in 1653 with the Five Nations of the Iroquois Indians, in which their villages were destroyed by 1,800 Iroquois warriors.

In the 1720’s, the French named the peninsula Presque Isle, which means “almost an island.” The French were the first inhabitants of the modern city, Erie, and had built Fort Presque Isle. They named it for the peninsula that strategically protected their fort in 1753. America eventually gained control of Presque Isle after the American Revolutionary War, when the Iroquois sold their rights to the land to the United States at the second Treaty of Fort Stanwix in 1784. While Presque Isle has important historical and military relevance, today it is more important for its diversity of flora and fauna. Presque Isle has six distinct ecological zones, each with a unique plant and animal community, surprising based on the peninsula’s relatively small size. The zones consist of Lake Erie, the bay and shoreline; the sand plain and new ponds; the dunes and ridges; the old ponds and marshes; the thicket and sub-climax forest; and the climax forest.

Due to its location along the Atlantic flyway and its ecological variety, Presque Isle State Park is a haven for bird life. It is home to over 320 different species of birds and has been rated by Birder’s World as one the best places in the United States for bird watching. One of the prime bird watching locations at Presque Isle is Gull Point. This 319-acre area demonstrates the best examples of succession in the park. However, this area is also the most fragile and protected part of Presque Isle. To preserve the resources of Gull Point, it has been designated as a natural area. State park natural areas are set aside to provide locations for scientific observation of natural systems. Because Gull Point is so well-protected, it makes a naturally safe nesting area for many types of birds. During some years, more species of birds have been found in this small area than almost all locations in the eastern United States. According to Cory Merryman, a Presque Isle Partnership employee, there is currently an active bald eagle nest at Presque Isle. Shorebirds also migrate yearly to Gull Point from beyond the Arctic Circle, to the southern reaches of South America, and back again. They begin to arrive at Presque Isle in April and stop to rest and feed on their return trip until late November. This time period gives avid bird watchers unforgettable experiences that cannot be found anywhere else in Pennsylvania, or, for that matter, the country.

Other popular activities at Presque Isle include relaxing on one of the thirteen unique beaches, hunting and fishing, biking, boating, hiking, picnicking, or learning at the Stull Interpretive Center. (Another beloved activity that most locals can take advantage of every summer night is watching the beautiful sunset.) 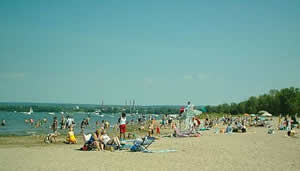 With athletic events, family activities, live music on the beach, and the area’s largest outdoor craft show, Discover Presque Isle is a popular community event that annually attracts 150,000 visitors. Presque Isle Partnership employee Cory Merryman said, “We try to enhance the Presque Isle visitors’ experience by developing, funding and implementing projects and programs on the Park, while protecting the natural environment. We sponsor numerous events throughout the summer to raise money in an effort to better this pristine park.” Some of the other events run by the Presque Isle Partnership are the Sunset Music Series, The Bay Swim, Walk to Make a Great Park Better, The Presque Isle Triathlon, and The Turkey Trot.

Presque Isle State Park is a natural gift that many people (Presque Isle State Park Manager Harry Leslie estimates that 4 million people visited in 2009) have been able to experience. With so many different things to offer, visitors never seem to leave disappointed. Tim Polaski of Erie, interviewed in the Erie Times-News, continually returns to Presque Isle for the windsurfing, a pastime he has taught his children. Polaski says, “If it’s windy I’ll be windsurfing…It’s a real big adrenaline rush, and it is a good way to have fun and exercise at the same time.” Jeff Gandee of Washington, D.C. made the twelve-hour roundtrip to Presque Isle in a day just to go kiteboarding. The 20-foot waves whipped up by the winds over Lake Erie created the perfect conditions for this adrenaline junkie.

Yet Presque Isle does not only cater to sports enthusiasts—even moviegoers have a reason to visit: the last scene in the film adaptation of Cormac McCarthy’s The Road was filmed on the beaches of Presque Isle. Gerry Weiss, a reporter for the Erie Times-News, writes “I’ve seen ‘The Road,’ and I can say you’ll notice a sizable chunk of our old familiar peninsula. Beach 10. Sunset Point. Some of the side roads. They all made it.” Those visitors with an appreciation for the park’s natural beauty will also be rewarded. World Scout authority William Hillcourt said in an Erie Times-News interview that, even in November, “It looks beautiful out there.” Sports enthusiasts, nature lovers, and movie buffs agree: this stunning park has a little something to offer everyone, all year round.