Got a Light? Zippo Lighters

Easily recognized by its flip-open lid and classic metal design, the Zippo lighter has become an American icon. Since Zippo's introduction in 1933, more than 400,000,000 lighters have been produced. A favorite of American GIs and Hollywood movie stars, Zippo has grown to achieve worldwide name recognition.

Located in Bradford, Pennsylvania, the Zippo Manufacturing Company was founded by George Blaisdell in 1932. Blaisdell grew up working in his family's machinery business, where he learned machining techniques that would help him create his famous lighters. His inspiration came in 1932, when Blaisdell was smoking with a local business man. The man used a strange- looking windproof Austrian lighter with a wick, a flint wheel and a hinged lid. This design protected the flame, but the lighter was an awkward, flimsy device that had to be operated with two hands. One year later, Blaisdell improved on the design and created his very first lighter. Blaisdell's lighter had a durable metal case and a rectangular design that was easy to open using one hand. Blaisdell liked the sound of the word "zipper" and thought "zippo" sounded more modern, so his creation became known as the Zippo lighter. 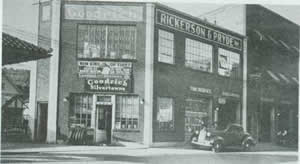 Zippo.com
The top floor of this building was the Zippo Manufacturing Company's very first headquarters in the 1930's. Zippo expanded rapidly and soon purchased its own plant.

Blaisdell obtained a patent for his design in 1936 and began producing Zippos full time. His first factory employed three workers and was located in Bradford, Pennsylvania. The very first Zippo lighters rolled out of the factory and sold for $1.95. Blaisdell's first big break came soon after he started the business. The Kendall Refining Company in Bradford placed an order for 500 Zippo lighters with the Kendall logo on them. With this large order, Zippo was officially in business. These special lighters were the first of many advertisement Zippos, which have since become valuable collector's items. Zippo lighters have become showcases for corporate logos, sports team logos, special events, and famous places around the world. 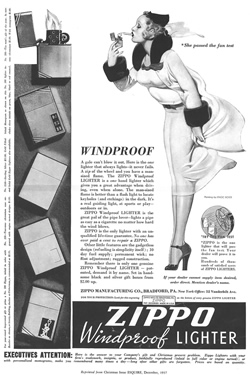 todaysinspiration blog
Early Zippo ads highlighted the windproof qualities of the lighter. In this advertisement from 1937, readers are encouraged to try the "fan test."

Zippo lighters have always been unique. Unlike most other lighters on the market, Zippos are virtually windproof. A metal windscreen houses a wick, which is lit by the spark from a flint wheel. This design protects the flame and enables the user to light a Zippo in harsh weather conditions. Early Zippo advertisements emphasized the windproof capabilities of the lighter. Zippo dealers were encouraged to demonstrate the "fan test" for their customers by holding a lit Zippo in front of a blowing fan for a short period of time. The test was a popular dealer gimmick, and it helped contribute to the growing sales of the Zippo. Another major reason for the success of the lighter is the company's lifetime guarantee. In the early days of the business, Blaisdell's motto, "it works, or we fix it free" helped generate positive word-of-mouth promotion from Zippo's customers.

The Zippo Manufacturing Company has always had strong ties to Bradford, Pennsylvania, where the manufacturing plant and corporate offices have been located since George Blaisdell produced his first lighter in 1993. Blaisdell once stated, "If it weren't for the people of Bradford, there would be no Zippo; Zippo will always support Bradford and the surrounding area residents." Blaisdell built and maintained the Zippo Ski Slope for the citizens of Bradford in the 1940's, and he always made sure "Bradford, PA" was engraved on the bottom of every Zippo lighter. Blaisdell was closely involved with the local community until his death in 1978. The George Blaisdell Elementary School in Bradford was named in his honor. 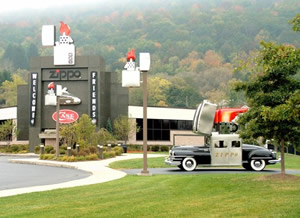 Senator Arlen Specter
The Zippo Museum and Visitors Center is currently located in Bradford, PA. Thousands of Zippo collectors gather for a swap meet at the museum every other year highlighted the windproof qualities of the lighter. In this advertisement from 1937, readers are encouraged to try the "fan test."

The onset of World War II sparked a relationship between Zippo and the United States Military that has always been close. In 1941, Zippo ceased consumer production of its lighters and began selling to the military full-time. Blaisdell became a government contractor who supplied American GIs with millions of Zippo lighters. Brass was reserved exclusively for military use during wartime. As a result, Zippo lighters during the war were made of low-grade steel and spray painted black. This black lighter quickly gained popularity among soldiers serving overseas. The lighter was cheap, durable and always worked when it was needed. Zippos became famous during the war for heating cans of food or lighting darkened instrument panels to help soldiers on the front lines. Famed war correspondent Ernie Pyle called the Zippo "the most coveted item on the battlefield." The Zippo plant worked at full production during the war to meet the tremendous demand of American soldiers. When Zippo returned to consumer production after the war, the lighters had achieved worldwide recognition. Customer demand was now at an all time high.

Zippo lighters achieved notoriety yet again when American soldiers carried them into the jungles of Vietnam. Soldiers relied on Zippos in Vietnam just as their fathers did during World War II. Most soldiers personalized their lighters by carving dates and places on the metal finish. Some Vietnamese merchants were able to make a living engraving images on Zippos before selling them back to soldiers at flea markets. Bradford Edwards, a Vietnam-era Zippo collector and artist, believes that the customized lighters reflect the individual feelings of each soldier. "You had people who were discontent people who wanted to express heartfelt emotions," he said. "And here was a small canvas...they may be the last thing some of these guys had to say."

In August 1965, Zippo lighters became part of one of the most iconic images of the war. CBS correspondent Morley Safer was reporting from Vietnam for the CBS Evening News with Walter Cronkite. Safer was filming a group of Marines as they came upon Cam Ne, a civilian village, and began to light it on fire. The Marines had doused the thatched huts with gasoline and were using Zippo lighters to set them ablaze. The group of soldiers setting the huts on fire referred to themselves as "the Zippo Brigade." This image of the soldiers using their lighters was one of many reasons public sentiment began to turn against the war. While this image helped turn Americans against the war, the public did not seem to hold Zippo accountable. Sales were continually strong throughout the conflict and into the 1970's. 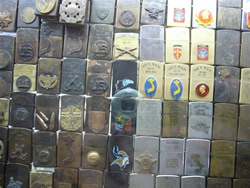 Zippo lighters are highly collectable, and they have created a large following. The Zippo Manufacturing Company estimates that there are more than four million private Zippo collections in the United States alone, with millions more around the world. Every other year, Zippo holds an enormous swap meet in Bradford, Pennsylvania for collectors to purchase, sell and exchange Zippos. Beginning in 1955, manufacturing dates were printed on the bottom of each Zippo lighter. These dates have helped collectors identify and appraise valuable Zippos, adding to their collectability. Zippo has produced thousands of unique variations of its lighters, some of which have become extremely valuable. Rare and valuable Zippos are routinely auctioned off for thousands of dollars. In 2007, Zippo sold a near mint 1933 model to a private collector for $37,000.

Over the course of the twentieth century, the Zippo grew from an obscure outfit in Bradford, Pennsylvania into one of the most famous brands in the world. A favorite of collectors or simply anyone in need of a flame, the lighter has achieved a reputation of quality and durability. The Zippo lighter is a true American icon.