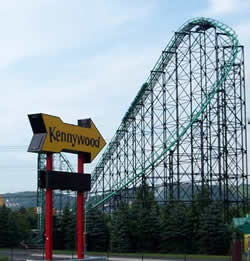 A place in West Mifflin, Pennsylvania that was once a simple picnic area at the end of a trolley line is now an amusement park once designated as “The Roller Coaster Capital of the World.” Kennywood Park’s transformation over the years to the large, fun-filled, family setting it is today seems to have flown by as quickly as its most prominent coasters. The park, which has been long recognized as the birthplace and graveyard of Pennsylvania’s greatest amusement park rides, still remains in its original location in West Mifflin, just ten miles outside the city of Pittsburgh. With its perfect balance of live entertainment, exciting games, greasy food, and thrilling rides, it is no wonder that Kennywood has been named the National Amusement Park Historical Association’s favorite traditional amusement park.

Kennywood was founded in 1898 by the Monongahela Street Railway Company, which was partially managed by Andrew Mellon. The railway company leased a piece of land from Anthony Kenny that was originally called Kenny’s Grove, but was later renamed Kennywood Park by Mellon. The original design of the park was planned by the company’s chief engineer, George S. Davidson, who later became Kennywood’s manager. Davidson’s first layout merely consisted of a picnic area for families to enjoy on weekends. In 1899, a casino building, dance pavilion, and carousel were added, marking the beginning of Kennywood as an entertainment venue.

Due to steep competition from other trolley parks, the next three years were critical to Kennywood’s survival. In 1900, the Monongahela Street Railway Company and the Pittsburgh Street Railway Company merged and began to add additional attractions to the park, including a small artificial lake, another dance pavilion, and more picnic groves. The next year, Kennywood opened its first dark ride, The Old Mill. The ride put passengers in boats as they journeyed on a stream through a haunted factory. In 1902, the park’s first roller coaster was built. It was a wooden coaster named The Figure Eight that traveled eight to ten miles per hour, speedy by that period’s standards. The park remained unchanged until 1906 when it was sold to A. S. McSwigan and Fredrick W. Henninger, who were responsible for the modern day layout of Kennywood.

From 1910 to 1930, the park opened several new attractions, including the popular Racer and Jack Rabbit wooden roller coasters. The Racer was first built in 1910 and featured twin tracks that gave riders the sensation that they were racing against the cars on the opposite path. When the Racer was first built, it held the record as the largest racing coaster in the world. The Jack Rabbit was built in 1921 and was able to reach higher speeds than previous Kennywood coasters by building wheels under the track. The Jack Rabbit also featured a thrilling 70-foot “double dip” that caused riders to briefly feel as if they were floating. In 1924, the Pippin, another rollercoaster featuring a double dip, was built at the opposite end of the park. Kennywood’s famous swimming pool was constructed in 1925. Containing two and a half million gallons of water, it was considered one of the largest pools in the country. In 1927, the original Racer was demolished in order to make way for Kiddieland, a special section of the park devoted to children’s rides. The Racer was so popular, however, that a new version of the racing coaster was built next to the Jack Rabbit, featuring higher speeds and more curves than its predecessor.

The park struggled during from 1930 to 1935 as the Great Depression hit the United States. Kennywood remained afloat during this period by booking dance bands to play in the park’s pavilions. The latter half of the thirties marked a period of prosperity for the park as it added new attractions, including Noah’s Ark, a walk-through fun house. During WWII, the materials used for construction of new rides were needed for weapons, so Kennywood expanded its ride selection by purchasing a used Ferris wheel and miniature train. The Henninger and McSwigan families continued to run the park effectively by agreeing to keep the park family-oriented without alcohol, gambling, and other undesirable activities, a tradition that has continued into the present day. 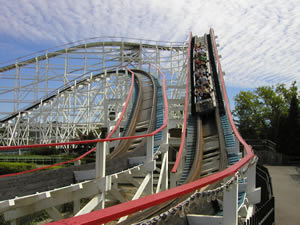 In the 1960s and 70s Kennywood received additional competition from theme parks like Disneyland. To remain viable, Kennywood added a variety of new rides, including the Turnpike in 1966. In 1967, Kennywood’s management made an extremely bold and unpredictable decision regarding the construction of the now-legendary Thunderbolt by closing their most popular coaster at the time, Pippin, to erect the exciting new wooden coaster in its place. Although the Thunderbolt started and ended on the same track that the Pippin had, the new coaster added a 90-foot drop in the middle of the ride. This renovation marked the first time that the mid-section of a rollercoaster had ever been completely redesigned. The gamble of closing the Pippin paid off in 1974 when Robert Cartmell declared the Thunderbolt “the Ultimate Coaster.” Cartmell, writing for The New York Times, shared his experience on the Thunderbolt:

The “Thunderbolt” shocks you from the beginning with an immediate plummet from the loading platform into a valley…Here there are a series of bruising turns that so disorient you that the gaping valley to the right—or is it the left?—is forgotten. Without warning, the cars are then plunged into the valley, 80 feet below…but while the riders’ sighs and giggles of relief can still be heard the train suddenly drops 90 feet before returning home. A hill like this is unthinkable, unfair, but it’s just one of the joys to be experienced on this king of coasters.

It was after the construction of the Thunderbolt that Kennywood earned itself the title of the “Roller Coaster Capital of the World.”

After the 1973 season, Kennywood’s swimming pool was deemed financially undesirable and was closed. Kennywood managed to keep visitors cool during the hot summer months by installing a series of water rides, starting with the Log Jammer, the park’s first million-dollar ride, in 1975. The Raging Rapids, which simulated a whitewater rafting trip, was added in 1985. Just two years later, Kennywood was named a National Historic Landmark by the National Park Service, one of only two amusement parks to have received this honor.

In 1991, Kennywood’s first steel rollercoaster was built, the Steel Phantom. When it was first constructed, it held world records for the longest drop (225 feet) and the fastest speed (80 mph). In 1995, the park’s final water ride was added, the Pittsburg Plunge. Featuring a 50-foot drop into a pool of water, the Plunge was inspired by an old Kennywood ride, Luna Parks. The ride’s new title is an homage to Kennywood’s roots at the turn of the century when Pittsburgh was spelled without an ‘h.’ 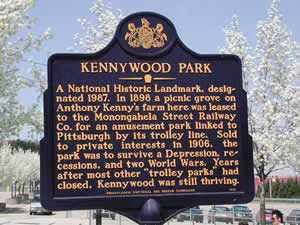 puderluder.com
A state historical marker commemorates Kennywood having been named a National Historic Landmark in 1987.

In 2001, the Steel Phantom was redesigned as the Phantom’s Revenge, which featured a 288-foot drop and speeds of 82 miles per hour. The same year also marked the centennial anniversary of The Old Mill, making it one of Kennywood’s oldest attractions. The Darkride and Funhouse Enthusiasts organization honored The Old Mill as the longest-running dark ride in North America. Although the basic premise of the ride has remained unchanged, in 2004 its interior scenery was updated and The Old Mill was renamed Garfield’s Nightmare. The attraction now features a 3D trip through Garfield’s frightening food dreams.

Today Kennywood stretches over a massive ninety-two acres and is home to a total of forty-six rides that vary from wooden and steel roller coasters, to water rides, thrill rides, classic rides, dark rides, and even rides for younger children. The park is divided into several sections, some of which are themed. “Lost Kennywood” gives guests a chance to relive the style of the park in the 1900’s while “Volcano Valley” contains multiple high-speed thrill rides and the infamous Noah’s Ark. A separate section branches off into Kiddieland, where smaller rides are available to the youngest of Kennywood’s guests.

Despite the new technology that make possible ever faster and scarier rides, the park continues to honor its trolley park days with a ride called the Olde Kennywood Railroad. Used in the 1939 World’s Fair, this calm and enjoyable ride chugs along through those parts of Kennywood that overlook the Monongahela River, one of the two large rivers that intersect in Pittsburgh to create the Ohio River. Kennywood is also planning to keep its long-held dedication to coasters alive with a new supercharged rollercoaster that launches riders from zero to fifty miles per hour in just three seconds. The ride, which will be unveiled during the 2010 season, also features a 95-foot climb to a straight vertical drop. Thus Kennywood continues to distinguish itself as an amusement park that combines cutting edge thrill rides with old fashioned favorites. This unique aspect of Kennywood keeps generations of families returning to the park, year after year. While older family members can still wait in line for many of the rides they remember from their youth, Kennywood urges the younger generation to “make a new memory” on the updated attractions that the park unveils each season.