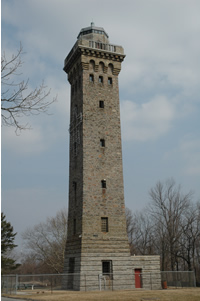 The top of the stone structure peaks higher above sea level than the Empire State Building. The tower 's neighbor on the southern slope of the mountain, the Pagoda, has become a symbol of the city, while the tower is its orphan," says Charles J. Adams III, editor for the Historical Society Press of Berks County, referring to the William Penn Memorial Fire Tower.

Less than a mile apart on the same mountain, two unique structures overlook the city of Reading. The first, a large Japanese edifice covered in red neon lights known simply as the Pagoda. Thanks to its luminescent red glow and its prime placement at the center of Mt. Penn, the mountain adjacent to the city, it has become a lighthouse for the city, casting a familiar light to all its onlookers. The second served a purpose other than aesthetic, and perhaps that is why it had been forgotten. The William Penn Memorial Fire Tower was constructed to watch over not just the city, but the surrounding forests and acres of farmland. It is said that from the top of the tower one was able to see plumes of smoke as far as Valley Forge or the Delaware Water Gap, a 60 mile radius. Yet even as the tower remains outshined, it is the Pagoda’s popularity that has helped the effort to bring the fire tower back to its former glory.

After driving through the stoplights and one-way streets that cluster the city of Reading, a public park brings a halt to the familiar city scenes to convey the sight of a large hill sheltered in trees. It is a mere minute before the thought of the city seems a distant memory as the travel up a winding road brings a view of only woodland and the occasional house. Nearing the crescent of the first hill, one will come across a sign pointing in the direction of Skyline Drive, the road to the two landmarks. A little past the summit of Mt. Penn, the sky is pierced by a large brick watch tower that seems better suited for medieval Europe than its current location. 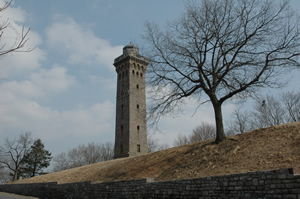 At first glance, the tower seems out of place. Alone at the top of a mountain, a cleared strip of land largely devoid of the surrounding trees and the deep brown stone that makes up the tower seem to entail a sense of emptiness. However, upon closer inspection the unique features such as the stained glass windows, stone walk ways, and tile displays can almost tell the story of the William Penn Memorial Fire Tower to its admirers.

In 1889, a wooden fire tower was constructed at the same location to keep watch over the city 's 5000 plus wooded acres and surrounding farmland. In an ironic twist of fate, this fire tower burnt down in 1923. It would be another fifteen years before Mt. Penn would be outfitted with another tower. In early 1930s Reading, a stagnant economy was in need of aid. When President Franklin D. Roosevelt's New Deal created the Public Works Administration in the mid 1930s, Reading had found a way to create jobs. On September 15, 1938, the city received $15,091 in Federal grant money for the tower. This amount was combined with the city's $18,445 and in the wintry months that followed construction began.

G.C. Freeman designed the tower, incorporating cosmetic and functional elements from over a half-dozen towers scattered throughout the county as far away as St. Paul, Minnesota. Initial design elements were obvious; the tower would be constructed of entirely fireproof materials. Stone would supply the base for which a brick tower could be built. Scaling the inside is a 120 step steel stairway. At the top lay a glass-walled room containing 16 spotlights to illuminate the land it watched over, surrounded by a steel observation deck. Capping the tower was a large, round copper dome. In August 1939, the 120-foot tower, standing 1,239 feet above sea level was completed. 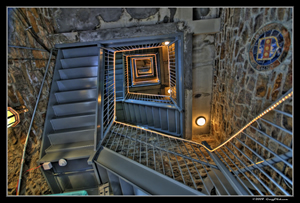 Gregg Obst/Flickr
Dizzying view up the 120 steps inside the Tower.

Prior to its opening a contest was held to name the tower. Tony Pietrovito, who suggested naming it the William Penn Memorial Tower, admits he came up with the name while watching "Penn 's Dream," a pageant presented by the 1939 graduating class of the Reading High School. The tower, now complete with a name, officially opened for service and to the public on October 28, 1939. It is reported that within its first two months 80,000 people visited, with claims that there were cars from every state in the union. The tower has since been decorated with stained glass windows, a mosaic of the Arms of William Penn displayed upon entrance, and a tile pattern of the silhouette of William Penn which lay in front of the main door.

Sadly, interest in the tower began to fade. As communication technology improved, the need for such a tower began to diminish. The nearby Pagoda became the city's icon, being placed on post cards, magazines, and newspapers alike, eventually placing claim on an overwhelming majority of any potential admirers. Minimal maintenance kept the tower open until September 1988, one month shy of 49 years of service. In the mid 1990s the former chairman of the Pagoda-Skyline, Inc., William Richter, was quoted as saying, "I call it my wounded sentinel guarding the city. The Fire Tower has left an indelible mark on the landscape of Berks County, but it makes me ill when I see it now."

For nearly a decade the tower stood dormant. However, help would come from an unlikely source when restoration demands for the popular neighbor down the street began to grow. The Pagoda-Skyline Inc. took this demand as an opportunity to improve the entire skyline drive. In 1998, restoration efforts began. Initial estimates to renovate the tower were given at $1,000,000. Restoration began in 2000 and the tower was reopened on a limited basis on Oct. 28, 2004, its 65th birthday.

pagodaskyline.com
Spectacular view of Reading from atop the Tower on Mt. Penn.

Although the tower remains open on a limited basis, it has begun to generate some of its original interest. On any given weekend cars can be found in its gravel parking lot. Since 2005, an annual Easter hike walks the trails up Mt. Penn, ending at the tower. And despite being the lesser known of the two fantastic structures atop the mountain, the tower still bests any view offered from any other vantage point near or far. On a clear day one can see all the town houses, old manufacturing plants, and modern art buildings dispersed throughout the city. Beyond this, the view from the William Penn Memorial Fire tower lets visitors see past the suburban shopping centers and neighborhoods to the farmlands, finally giving way to the forests and rolling mountains throughout Berks County.