Musikfest: The Musical Rebirth of Bethlehem 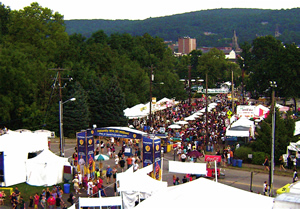 In 1984, Donald Russo strolled through the historic section of Bethlehem, Pennsylvania with his wife and his dog, Fred. Walking into the Sun Inn courtyard, he found a group of people watching a guitarist on a large stage. “We wondered if we had unwittingly ‘crashed’ a private garden party.” said Russo. This was no private event. Donald stumbled on the very first Musikfest— Bethlehem’s annual ten day celebration of music. The festival offers several venues that feature free musical performances and a multitude of food and drink. For over a quarter century, Musikfest has been transforming Bethlehem into a booming town of celebration. “Something happened that night,” says Donald Russo, “and it changed everything. Bethlehem has never been the same, and the cultural landscape of the Lehigh Valley will never be the same.”

Pennsylvania championed industry in the 19th and 20th centuries. Excavation of coal and slate and the production of cement and steel stimulated jobs and wealth in the state. Bethlehem Steel, once the second largest producer of steel in America, was situated in Bethlehem. Remnants of the steel factory’s giant steel stacks still stand high over the city. However, in 1984, the American steel industry waned.  Production stalled and Bethlehem Steel cut about forty percent of its work force in the three years prior. Executives had to “cut the fat,” as some called it, and the subsequent layoffs devastated the region.

Musician and singer, Billy Joel, toured extensively through the Lehigh Valley early in his career and witnessed the first-hand effects of the layoffs. He sang about the region’s woes in his song, “Allentown.” Joel says, in an interview with The Morning Call, “What I was really writing about, to be honest and fair, was about Bethlehem, not so much about Allentown.” He sings:

His song recounts the sadness in the region. Joel states:

Over the years of playing in the Lehigh Valley there did seem to be not a sense of futility but there was a kind of wearing on the area from what had happened in the steel industry. There wasn’t a sense of growth anymore. There was a sense of wanting to go somewhere else, but they were going to stay. Which is something I wrote about in the song. I wanted to end on an optimistic note—“It’s getting very hard to stay, we’re living here in Allentown” We’re staying. We’re here. 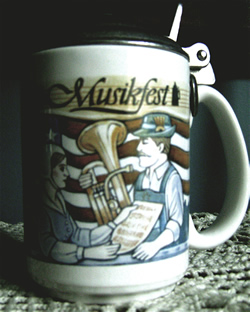 Matthew R. Hengeveld
German heritage was the original impetus for the creation of Musikfest.

In 1984, Jeffrey Parks, attorney and lifelong resident of Bethlehem, had an idea. Bethlehem already attracted many tourists through its Christmas festivities— it is known as “Christmas City” because of its biblical name. Parks wanted to extend tourism past the Christmas season in order to help the weary place. He knew that Bethlehem has a large German heritage, and he wanted to incorporate this heritage into his plans. Many of Bethlehem’s German-Americans came to America as Moravians in the mid-16th century. Among other things, the Moravians were known for their musical prowess, and Parks wanted to focus on this. Parks proposed the establishment of an annual music festival that celebrated German heritage and music. Critics were skeptical, especially when considering the price the festival would place upon local taxpayers. However, the Bethlehem city council agreed with Parks, and the first Musikfest was born.

Parks projected the first Musikfest to cater to 100,000 individuals. It boasted several entertainment “platz” areas—“platz” being the German word for “place”—Familieplatz, Liederplatz, Festplatz, Volksplatz, and Kuntzplatz. The platzes serve as a venue for musical acts that played German music, world music, and other family-friendly tunes. Nearly all venues were free to the public, and, for the most part, remain free today. The festival’s “schedule [included] 296 individual musical events and theatrical performances – all but 11 of them free. Though most of the music will be modern folk, jazz and big-band idioms, there is also plenty of the classical material for which Bethlehem is known.” stated Roland Kushner, Musikfest planner, to Ron Wolf of The Philadelphia Inquirer. 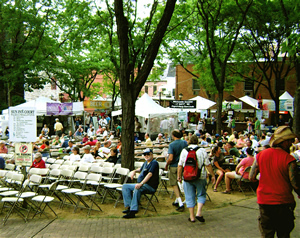 Matthew R. Hengeveld
Food of all sorts, but especially German food, is enjoyed each year at Musikfest.

The first Musikfest in 1984 had fantastic attendance: 182,000—significantly higher than Parks’ projections. People loved the festival. One performer is quoted in the Morning Call saying, “I must say I never saw so many people doing a chicken dance at once.” Another Fest-goer says, “You just can’t get depressed listening to jug-band music… Musikfest gives the people a wonderful sense of community… Bethlehem needed something like this.” Indeed, Musikfest brought brightness to the suffering region. Jeffrey Parks gave birth to an event that would grow to become one of the country’s greatest music festivals.

However, there wasn’t a lack of wacky happenings at the first Musikfest. For instance, visitors complained of a terrible odor that filled the entire Musikfest area on Wednesday, August 22, and it left Festival officials guessing. The smell actually came from a horse that pulled a cart ride around the Musikfest area. The cart-hauling horse had contracted a severe case of diarrhea, which literally doused the festival with the scent of manure. It would not be the first time the festival would have issues with horses and their droppings.

1984’s Musikfest saw the emergence of Patricia Holetz, the Chicken Lady, who annually attends Musikfest dressed head-to-toe as a chicken and leads the popular polka dance, the Chicken Dance. She returns to the festival every year, performing the Chicken Dance. Her devotion to her role is so great that, in 1987, she led the Chicken Dance despite having a broken foot. Even Bethlehem Mayor Paul M. Marcinin was caught letting loose on the dance floor. Wearing “a striped shirt and a red tie and… a radiant purple headpiece with a small white plume,” and a large “I Love Bethlehem” button with an ear-to-ear smile and sweat running down his face, he was caught dancing wildly to a polka jam. Rich Harry wrote in an article celebrating the tenth anniversary of the festival, “Flushed with the glow of success, Bethlehem saw its communal pessimism recede and be replaced by a spirit of optimism.” The first Musikfest symbolized the rebirth of this community.

As the years went on, Musikfest boasted even greater attendance and high-profile musical acts, such as Pete Seeger, who shared some folk tunes with the Musikfest crowd in 1985. The festival gained about 100,000 more visitors each year; by 1987 Musikfest pulled in 500,000 Fest-goers. Some worried that Bethlehem couldn’t handle the high traffic, and there is no doubt that finding a parking spot can be a difficult task for the average fest-goer. However, Bethlehem has coped well with the growth of its beloved music festival. In its fourth year, some estimated that one-third of Fest-goers were coming from areas outside of the Bethlehem and Lehigh Valley area. Musikfest now gathers about five million visitors a year, some coming from other countries to join the festivities.

Since the festival’s inception, Musikfest operations have been upheld by a large group of volunteers. The devoted group of individuals chooses to work for nothing in order to ensure the sustainability of Musikfest each year.  In 2003, festival officials honored 49 volunteers that had committed twenty years of volunteering service to the festival, with many volunteers seeming more than ready to give another 20 years.

Today, Bethlehem’s annual celebration of music is running smoothly. Returning for its 27th year, it seems as if nothing can stop the celebration. People come to listen to music, like the quirky bell music of Frank Della Penna or the gigantic Polka extravaganzas. Some famous Musikfest performers include The Beach Boys, REO Speedwagon, Ray Charles, Earth, Wind & Fire, Clay Aiken, Dizie Chicks, Carrie Underwood, and Crosby, Stills & Nash. People come for the food, like Aw Shucks!’s roasted corn or the famous Take-A-Taco. But most of all, people come to be a part of the community. Governor Ed Rendell said of Bethlehem in the Express-Times, “This is a great city 365 days a year… But it’s a very special place during Musikfest.”