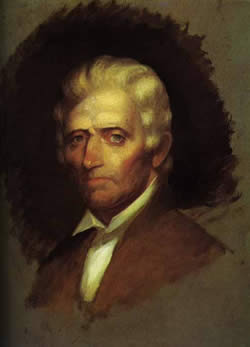 Chester Harding, 1820
Daniel Boone's use of the Pennsylvania Long Rifle in Kentucky made it so famous that it became more widely known as the Kentucky Rifle.

According to historian Henry Kauffman, prior to the introduction of the Pennsylvania Long Rifle, most firearms found in North America were smooth-bored muskets with short barrels. While these firearms were relatively effective for their time, they were difficult to reload and their smooth bores resulted in very low accuracy. Then, in the early 1700s, Martin Mylin, a German immigrant to Lancaster County, produced the first of what would come to be called Pennsylvania Long Rifles. While there is some debate over whether or not Mylin was the actual inventor of the Pennsylvania Long Rifle, according to a survey of Mylin's gun shop by Dr. Timothy Trussell and Joel Dworsky of Millersville University, the fact that a Rifle from 1704 bears the mark of Martin Mylin seems to suggest that the Mylin Gun Shop was indeed the birthplace of the most effective weapon in early American history.

Able to shoot five times farther than the comparable muskets of the day, the Pennsylvania Long Rifle had an effective range of approximately three hundred yards and was extremely accurate for its time. These incredible increases in both range and accuracy were due to the "rifling" of the barrel that produced a bullet that spun. According to Kauffman, this spin produced a shot that was far more accurate than the smooth musket balls of the day that tended to drift from the intended line. From a technical standpoint, when the trigger is pulled, a small amount of gun powder is ignited, creating a tremendous amount of pressure within the barrel. As the bullet leaves the barrel, the smooth curved lines within the rifle cause the bullet to rotate at a high rate of speed. In accordance with the Law of Inertia, the bullet continues to rotate as it approaches the target. Rifled versus non-rifled weapons are comparable to the difference between arrows with and without fletching. As early archers discovered, an arrow will fly much farther and much straighter if feathers are added to the end of the arrow. Much like the rifling of a gun barrel, the fletching causes the arrow to spin, creating an arrow that is far more effective than one without fletching.

William Rooks
This style of rifle is typical of the Lancaster style.

Equipped with this more powerful rifle that was accurate to great distances, American woodsmen such as Daniel Boone used this weapon for hunting with great success. According to Felix Reichmann, though Boone was a native of Pennsylvania, it was Boone himself that was responsible for the common name change of the Pennsylvania Long Rifle to the Kentucky Long Rifle. Known to most Americans as a legendary figure, Boone was one of the first European settlers in the New World to try to tame the wilds of what was then known as the American Southwest. A talented hunter, Boone frequently led so called "long hunts" on which he would disappear into the wilderness with little more than his rifle. Boone is particularly remembered for his adventures in Kentucky, including the establishment of the community of Boonesborough in present day Madison County, Kentucky. Boone was able to tame the wilderness of Kentucky through the use of his accurate, reliable Long Rifle. Boone's rifle allowed him to collect many animal pelts, particularly bears whose size necessitates an accurate, powerful shot to take down. In a darker portion of American history, Boone also used his rifle as a powerful weapon against Native Americans, specifically the Shawnee. As a result of his success as a frontiersman in Kentucky, people began to refer to his Pennsylvania Long Rifle as a Kentucky Long Rifle, hence the name change. However, the Long Rifle's use was not limited to the hunting trails of backwoods Kentucky.

The Pennsylvania Long Rifle also provided a considerable military advantage for the Continental Army during the American Revolution. British soldiers of the time were equipped with smooth bore muskets that forced them to get close to a large group of enemy soldiers and "volley" into the crowd, hoping to hit a target. However, Colonial soldiers equipped with Pennsylvania Long Rifles could stand hidden in the woods where they were safe from the British volley. From there, Colonial sharpshooters were free to effectively take shots that no British soldier's weapon was capable of making. In this way, the Pennsylvania Long Rifle allowed the Colonists to effectively stage one of the earliest guerilla wars against a far superior military force. Without the range and accuracy afforded by the Pennsylvania Long Rifle, the Colonists would not have been able to employ and execute their covert war. Without the Long Rifle, the colonists may never have won the war at all. William Rooks
Johannes Schreit made rifles in the Berks County area. This close up of the flint lock mechanism shows the work in greater detail.

The devastating effects of the Pennsylvania Long Rifle were most visible during two major military battles. The first battle, the Battle of Saratoga, took place in October of 1777 in eastern New York. According to historian and author Don Nardo, this early battle in the Revolutionary War allowed the British forces to experience firsthand the devastating military implications of the rifle. Following traditional European fighting techniques, the British stayed in lines and marched together on the open field of battle, attempting to control the fight through the use of the volley. Armed with Pennsylvania Long Rifles, the American Colonists instead chose to hide amongst the trees. From there, they had excellent cover from which to attack the British forces. For their part, the British lacked rifles that were accurate enough and that had the range to properly engage the hidden American sharp shooters. Consequently, the battle represented a major victory, both militarily and psychologically, for the Colonists. They had finally found a way to successfully engage what was thought to be the greatest fighting force of the time through the use of superior weapons. Additionally, Saratoga represented the genesis of a completely new style of warfare. Instead of fighting like "gentlemen," as most European armies fought, American colonists staged one of the first successful guerilla wars in the New World. All of this was possible because they were able to take accurate shots from great distances. 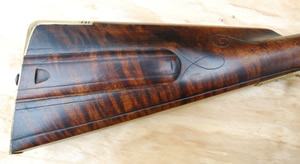 William Rooks
The patchbox at the end of the rifle butt allowed the marksman to store the patch for the rifle ball. Some patch boxes are highly ornate.

The second major battle where the power of the Long Rifle was on display was the Battle of King's Mountain which took place in 1780 in North Carolina. This battle is of particular importance because, according to Anthony Allaire and Isaac Shelby, the British actually had better technically designed rifles. The British were armed with carbines that allowed them to lay down a heavier volume of fire than even the best rifleman. However, the Colonists were still victorious. This victory was the result of Colonists firing more accurate shots. Once again, the Pennsylvania Long Rifle was proven to be the superior firearm of the time and an essential instrument in the eventual success of the colonists. However, though the Rifle was still the dominant weapon of the time, the development of carbines at this time would eventually lead to a new class of weapons that would eventually replace this rifle which served America for over one hundred years.

The Center wishes to thank William Rooks of Pennsylvania Long Rifles, Inc. for his assistance illustrating this article.