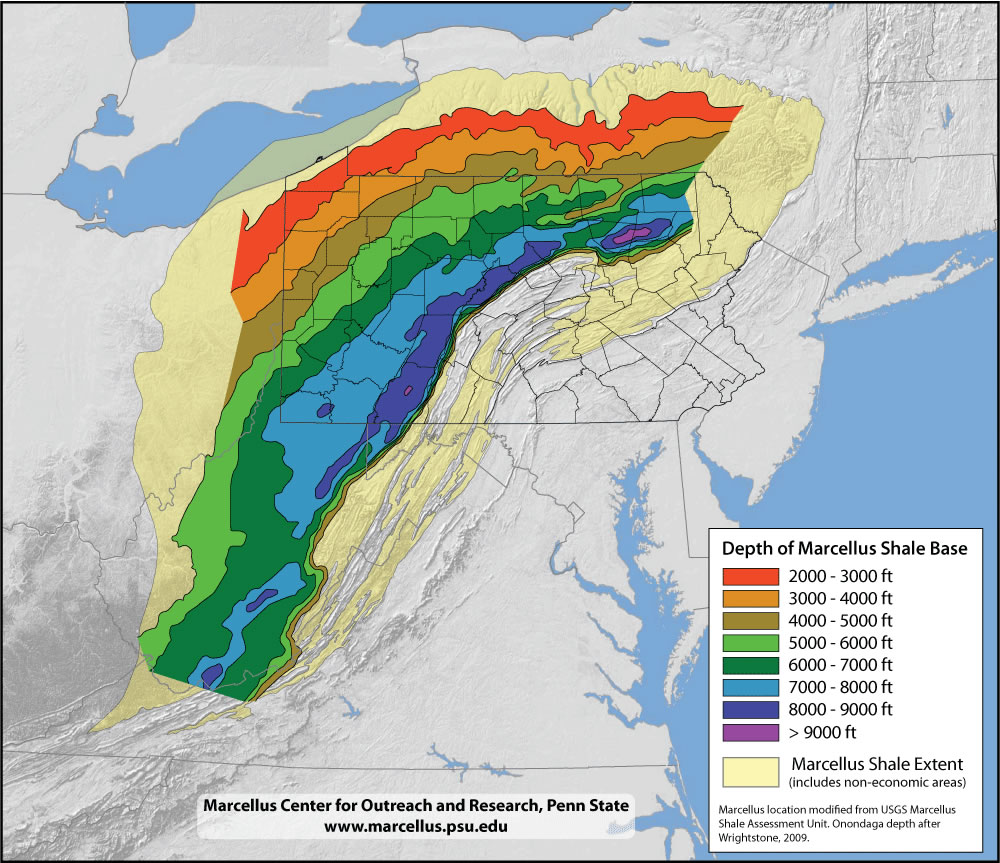 Penn State Marcellus Center
The Marcellus Shale formation stretches from Virginia through New York. Depths of the deposit vary across the range as depicted by the various color bands on the map.

In an ever-changing energy dependent world, new fossil fuel sources are becoming increasingly rare. When a new deposit is found, it can have immediate effects on the surrounding economy and United States energy consumption as companies jump at the bit to secure drilling permits. A recently discovered natural gas source is the Pennsylvania Marcellus Shale, which has a large amount of trapped natural gas. This deposit is now recognized as a game-changing opportunity. “It probably transforms the U.S. energy outlook for the next 100 years,” said Tony Hayward, the chief executive officer of Oil Company BP. Natural gas has recently emerged as a substitute to petroleum, allowing the treasure hunt to begin.

The Pennsylvania Marcellus shale is part of the large Marcellus Formation, which extends from Ohio through Virginia, West Virginia, Pennsylvania, and New York. Although production was started back in the early 2000’s, the majority of reserves are untapped and could potentially be enough to supply U.S. demand for fourteen years.

The shale in Pennsylvania alone holds about 60% of the natural gas in the entire Marcellus region. This has led to the effort by many companies to enter the Pennsylvania market and attain drilling permits. The strong interest of energy companies is also due to the fact that shale location is relatively close to high-demand natural gas markets along the East Coast.

The cause of the interest in the Marcellus region stems from the increasingly high, and frequently spiking, petroleum prices as well as relatively high natural gas prices. Further, the technology needed to construct a well that allows for successful drilling in the Marcellus has only recently been discovered. Natural gas currently supplies around 22% of United States energy demands and this value is expected to remain constant or increase slightly over the next two decades. Like oil, however, natural gas consumption exceeds domestic production, which means the difference is being imported from foreign sources. Drilling in the Marcellus will be able to eliminate foreign dependence all together. 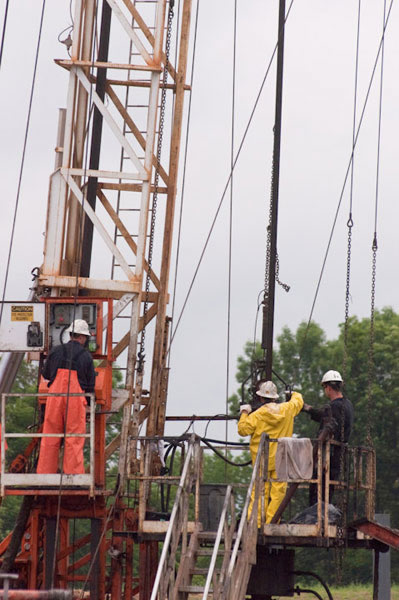 Natural gas is found within limestone layers that exist throughout the Marcellus shale. The gas is formed from the decomposition of organic materials and the very high pressure and high temperatures that exist this far under ground. Natural gas is literally kept in place in the shale pores by surrounding rock. Northeastern Pennsylvania is home to the richest shale deposits, particularly in Susquehanna County, where production is concentrated. Companies are driven to particularly rich shale regions, because gas is more easily accessible and there is more if it, allowing for drill sites to have longer life spans.

As of April 2009, the Department of Energy has estimated that the entire Marcellus may contain as much as 262 trillion cubic feet of natural gas, enough to supply United States demand for about fourteen years. Other estimates have varied. The recovery rate however is relatively low due to the fact that the natural gas reserves are located well below the earth’s surface.

Pennsylvania imports close to 75% of the natural gas the state uses each day. By tapping into the Marcellus, the Commonwealth would be able to transition from a net importer to a net exporter of natural gas. A major influence for the development of natural gas drilling is the long tradition of oil drilling within the state. This dates back to the first oil well that was drilled by Colonel Edwin Drake in Titusville, Crawford County in 1859. Experience and determination surrounding the oil industry can be brought to the natural gas industry to allow for successful drilling within the Marcellus. The Marcellus Shale currently ranks number one as the fastest growing natural gas production region in the United States. Sixty-percent of this area is within the state of Pennsylvania.

Historically, drilling for natural gas involved drilling a well vertically into the earth. Since natural gas deposits usually occur in vertical rock fractures, this was very much a guessing-game. In 2005, an energy company called Range Resources employed a type of drilling known as horizontal drilling at the Marcellus Shale. This is a relatively new drilling technique where drilling starts in the vertical, and then continues in the horizontal. Although this type of drilling is more costly than conventional drilling techniques, it is also more efficient and allows for enhanced production rates. 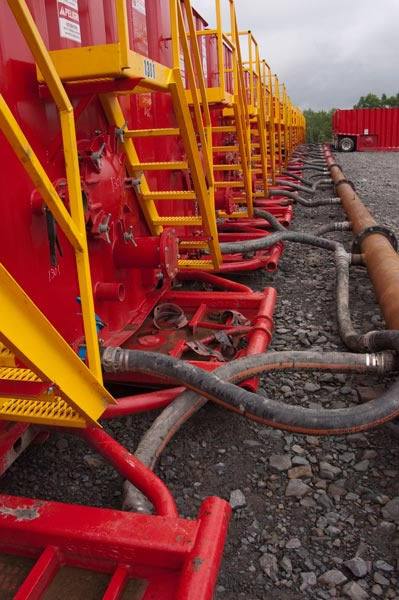 Penn State Cooperative Extension
Fracking tanks and manifolds provide the power and water for the separation of the natural gas from the shale.

Vertical drilling is paired with a technique called hydraulic fracturing, or simply “hydrofracking” in industry terms. After a well is drilled in the earth, large amounts of water, sand, and chemicals are pumped into the well causing the shale to fracture. “Hydrofracking” forces the natural gas into the newly formed fractures resulting in more accessible natural gas and a higher recovery rate. This creates an environmental problem however, because the contaminated water is pumped back to the surface along with the natural gas.

Landowners across the state of Pennsylvania are being offered to lease their land to various energy companies, so these companies will be able to drill for natural gas. Lease offers and signing bonuses have grown steadily over the last four years, but were once insignificant. Prior to 2006, there was very little interest in the Marcellus shale because it was not considered a viable natural gas resource and suitable drilling technology for reaching the natural gas was simply not thought of. Signing bonuses were only dollars per acre. After 2008 however, signing bonus of over $2000 per acre are not uncommon.

Although signing bonuses are a form of guaranteed income, another type of payment, in the form of royalties, can provide property owners with substantially higher returns. The normal royalty rate is 12.5% of natural gas yield, but this value can be higher if the property is a highly prized piece of land. Royalties from high production sites allow property owners to earn thousands of dollars per year or enough to live on. This increase in income may be maintained over the next few decades if there really is as much natural gas within the shale as experts think.

Some folks in Susquehanna County may stand to make millions of dollars from natural gas royalties and signing bonuses through the next couple of decades from companies such as Cabot Oil and Gas Corporation who have invested in the area. 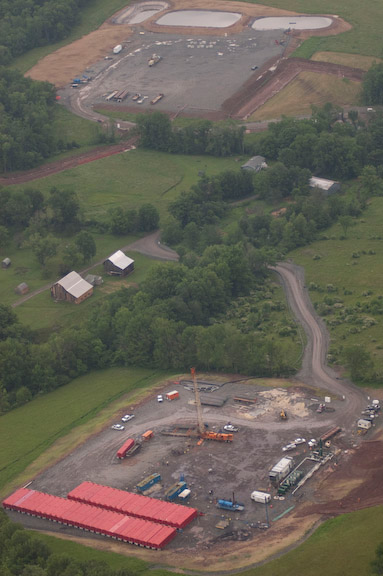 Other residents however, are negatively affected by the drilling. A resident from Dimock, Susquehanna County, was on the wrong end of a drilling explosion that caused the resident’s drinking water well to blow up. Although this was the most extreme event since Cabot began drilling in the region, the company has been forced to pay fines for fuel spills and drilling fluid spills.

Despite these incidents, the Tenth District United States Representative Christopher Carney believes if proper steps are taken, the region will benefit. He said, “We have an enormous opportunity, and we have to be careful how we approach it, but if we do it correctly, in the end I think the area will benefit dramatically.”

There are environmental skeptics surrounding the gas extraction process as well. Part of the extraction process involving the infiltration of millions of gallons of water into a natural gas well does not sit well with many. The water is used in the hydraulic-fracturing process of the drilling to break up the shale and allow for a greater rate of return of natural gas. However, the water is pumped back to the surface along with the natural gas, so a major problem is what to do with large amounts of contaminated water.

Since the water contains toxins from the shale, as well as sand and other chemicals, it becomes very dangerous if consumed. Scientists have even linked some of the toxins to causes of cancer. Waste pits which are used at many other natural gas drilling sites across the country to hold wastewater, pose a threat to the drinking water sources. Some drilling sites even pump the water back into the ground in solid rock areas, where it is kept separate from drinking water sources. Pennsylvania geology, however, prevents the use of this technique. 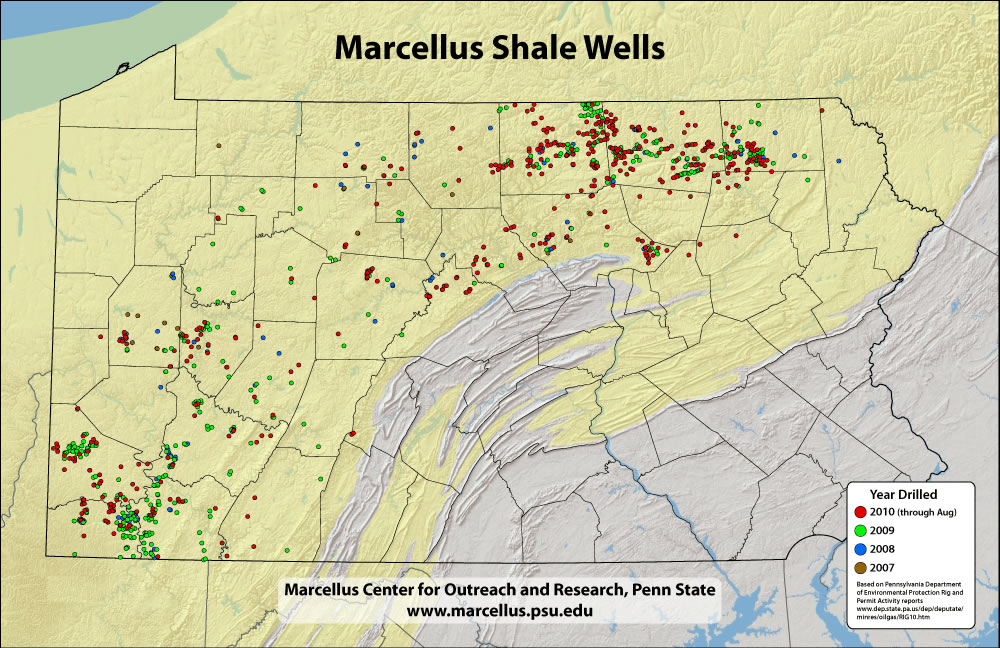 Penn State Marcellus Center
Many Marcellus wells have been drilled in recent years. Click to see the map in much larger scale.

Research is being conducted over the proper way to dispose the wastewater, but there seems to be no universal method. Range Resources is able to recycle the water, while other companies are bringing it to state or federal regulated waste disposal facilities. To further discuss and resolve environmental issues surrounding natural gas drilling in the Marcellus, both government representatives as well as industry professionals have formed the Marcellus Shale Coalition.

The Marcellus Shale Coalition’s goal is to find the best way to drill in the Marcellus while minimizing the environmental impacts. This not-for-profit coalition has a website at pamarcellus.com. The website has an abundance of information including, the opportunities surrounding drilling within the Marcellus, the drilling process, and environmental protection.