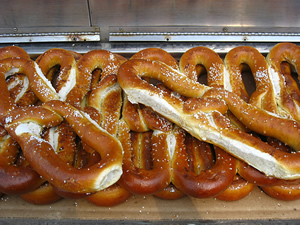 917Press/flickr.com
Pretzels have become a staple of the Pennsylvania diet.

Is it the salty yet satisfying taste of the handheld snack, the sweet crunchiness of a chocolate-dip or the simple sight of a street-vendor lathering the treat with yellow mustard that consumers cannot resist? Whatever the appeal, Americans love their pretzels. The average American consumes roughly 1.5 pounds of pretzels each year, leading to annual pretzel sales of over $550 million.

Several cities, including Philadelphia, Chicago, and New York, have boasted about their pretzels for years. Yet none of these places can truly take credit for the pretzel’s popularity. Instead, it is a small town in Pennsylvania that undoubtedly holds the bragging rights. Located in Lancaster County, Lititz, is home to the Julius Sturgis Pretzel Factory, the first commercial pretzel bakery in America. With the Sturgis factory at the forefront of the pretzel business in the US, 80% of America’s twisted treats are now produced inside the Keystone State.

While Pennsylvania has popularized the pretzel within the United States, the salty treat can trace its origins back much farther. Although the exact invention of pretzels remains a mystery, one popular story says that in 610 A.D. an Italian monk shaped long pieces of leftover dough in the form of children’s arms folded across their chests in prayer. He baked the treats and gave them to children who learned their bible verses. The monk called them “pretiola,” the Latin word for “little reward,” and soon children began to learn their prayers in exchange for the delicious snack. The trend caught on, and soon much of Europe was enjoying the twists. While there is no official documentation to support this story, there is no doubt that pretzels have a very long history, beginning in Europe. 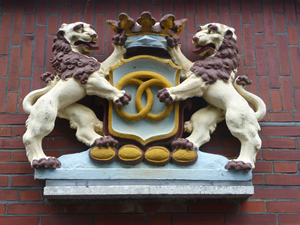 4028MDK09/wikimedia.org
The pretzel is at the heart of the arms of the BÕÔ_ckerhandwerks (Bakers Guild) in Germany. This image is from Juist in Lower Saxony.

About nine hundred years later, the pretzel emerged in the siege of Vienna. When the Turks tunneled under the city walls at night, it was the pretzel bakers (awake and busy at work) who heard the intruders and warned the city. After saving the city from the Turks, the bakers were awarded a coat of arms, depicting a pretzel and a lion on a shield. That coat of arms is still in use today; in fact, many bakeries in Europe can be identified by the sign of the pretzel above the door.

“Bretzels” (the name the Germans gave to the snack, derived from the Latin word brachium meaning “little arms”) have long been symbols of German bakeries in particular, and play a large part in German customs. The three holes created by the molded dough came to represent the Christian Trinity – Father, Son and Holy Spirit—and the pretzel soon become a religious symbol of good luck and prosperity. For the values they represent, pretzels were displayed on Christmas trees and German children sometimes wore them around their necks for good luck on New Year’s Day. Pretzels were a popular food during the Lenten season since they are made with basic ingredients (essentially yeast, flour and water). On Easter, pretzels were hidden around the farm for children to “hunt.”

The pretzel also became a symbol of love and romance, because of its intertwined shape or “knot.” In Switzerland, royal couples wished for happiness with a pretzel forming the nuptial knot. The bride and groom each made a wedding wish, then pulled on the pretzel and broke it like a wishbone.

The European soft pretzel most likely came to America with the Mayflower or with the Palatine Germans, later called the Pennsylvania Dutch, during the 17th and 18th centuries. Although the Europeans may have introduced the soft pretzel to America’s shores, the hard pretzel is reputedly a homegrown Pennsylvanian creation. Hard pretzels were “invented” when an apprentice in a Pennsylvania bakery accidentally fell asleep, over-baking a batch of pretzels. All of the moisture was cooked out of the dough, leaving crunchy knots. When the master baker saw this, he took a bite out of the small, seemingly inedible pretzel. Surprisingly, he loved it and soon realized that with no moisture, the pretzels would last longer on store shelves. 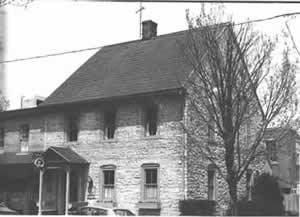 State of Pennsylvania
The oldest pretzel factory in Pennsylvania is the Julius Sturgis Pretzel Bakery in Lititz, Lancaster County.

Despite the invention of this new kind of pretzel, the snack did not garner widespread American popularity until Julius Sturgis opened the first pretzel factory nearly 200 years later. During the 1850s, Sturgis ran a bread bakery in Lititz, Pennsylvania. Legend has it that a hobo jumped on a train that ran behind the Sturgis bakery. Hungry and unemployed, he followed the irresistible smell to the bakery, looking for both a job and something to eat. Sturgis could not give the man a job, but he invited the traveler for dinner. In exchange for his kind hospitality, the traveler gave Sturgis a pretzel recipe. Sturgis had never baked pretzels, but decided to give it a try. The baked good was a hit with his wife and fourteen children, and thus he added pretzel baking to his business. Eleven years later, the baker stopped making bread and established the first commercial pretzel bakery in America.

The Sturgis family continues to bake pretzels today, using the recipe from 1861. Sturgis’ grandson, Marriott, was born in 1910 and grew up learning much of the pretzel baking trade at the original Lititz bakery. Nicknamed “Tom” Sturgis after his uncle, he continued the family traditions. In 1946, after working at a munitions factory during the War, “Tom” established another bakery in Reading, Pennsylvania, which he called Tom Sturgis Pretzels. Tom Sturgis Pretzels continues to operate today, run by his son, Tom Sturgis, Jr. and his grandson, Bruce Sturgis.

The Federal Baking Company was founded in South Philadelphia by Italian American Edmund Nacchio. His mother began baking pretzels in 1922, and Nacchio followed her recipe. The company was family-owned for four generations until it was sold to J&J Snack foods in 2000. Federal Baking is known for making the first soft pretzels in Philadelphia and for baking the world’s largest pretzel, which weighed forty pounds and was five feet wide.

The arrival of modern pretzel making began in 1933 when the Reading Pretzel Machinery Company introduced the automatic pretzel twisting machine. Before this invention, most pretzels were actually shaped by a cracker-cutting machine, then placed on baking pans and put into the baking ovens by hand. This machine has helped Reading to claim the title of the Pretzel Capital of the World, since one plant can make 10 million treats daily. More recently, in 1988, Anne Beiler bought a stand in a Downingtown, Pennsylvania, farmer’s market and began the popular Auntie Anne’s pretzel chain, which makes 100 million pretzels every year (and uses enough dough to wrap around the earth three times). Matt Benoy/nuvo.net
Mustard is the traditional condiment for pretzels in Pennsylvania. The large crunchy bits of salt are also a "must" for a proper pretzel.

Today, the Julius Sturgis bakery in Lititz is still open for business and has become a popular tourist site. Visitors can tour the factory building, which is listed on the National Register of Historic places. Many stop at the entrance to take a picture with the mega pretzel outside of the bakery. Visitors can also see the original ovens built by Julius Sturgis and learn the history of pretzel baking in America. During a tour, each visitor is given his or her own piece of dough and taught how to twist a pretzel. After successfully twisting their own treat, visitors receive an official pretzel-making diploma.

Whether it’s a bretzel in Germany, that street-vendored soft pretzel in Philly, or a bag of pretzel twists from Snyder’s, the pretzel has many faces and one long history. It is truly a Pennsylvania treasure. In fact, in 2003, the pretzel was recognized by Pennsylvania Governor Ed Rendell when he declared April 26 “National Pretzel Day,” to acknowledge the importance of the pretzel to the state’s history and economy. So whether or not today is the official day of the pretzel, it deserves to be celebrated—enjoy this tasty treat with a glass of beer, dip it in chocolate or slather it up with mustard—no matter how it is accompanied, the pretzel remains a little taste of Pennsylvania history.