The pathway is nothing more than dirt littered with random rocks, but the park bustles with families and couples enjoying the fresh air. The green-and-brown-tinted pond lies stagnant except for the occasional soft-feathered duck floating across its surface. Quacking can be heard in the distance as passersby throw food in their direction. Beyond the pond, orange and red trees fill the skyline; far beyond the trees, the concrete jungle sits in solitude. The park acts as a retreat for those who live in the city, but glimpses of synthetic skyscrapers can still be seen in every direction.

A walk through Pittsburgh’s 440-acre Schenley Park brings visitors breathtaking views of the Phipps Conservatory, a Victorian-era glass house nestled deep within the city’s historical district. As guests enter the Conservatory, lush green trees and exotic flowering plants create a calm atmosphere for full engagement in 17 unique botanical gardens. A wave of humidity hits visitors as they enter the main garden room, where tropical plants and brightly-colored seasonal flowers engulf them. Walking through each room in the Phipps Conservatory is like going on a world tour in only a few hours; exhibits feature dazzling displays of almost every plant imaginable.

Once the largest glass greenhouse in the United States, the Phipps Conservatory was donated to the city of Pittsburgh in 1893 by industrialist and philanthropist Henry Phipps. Henry Phipps’ life goal was “to erect something that [would] prove to be a source of instruction as well as pleasure to the people.” Committed to preservation and conservation, Phipps instilled these qualities in the institution’s design and function. Phipps insisted that the display rooms be open for free every day to benefit the working class of Pittsburgh.

Constructed entirely of stone, iron, and glass, the structure cost $106,000 to build and was originally called the Conservatory in Schenley Park. In the Botanical Guide through the Phipps Conservatories (1894), Gustave Guttenberg describes how revolutionary the Conservatory was for its time. The building’s main domed roof stretched over 60 feet and was flanked by two 52-foot octagonal domes. The original Conservatory was called “the finest example of horticultural architecture and construction to be found anywhere” for its revolutionary use of glass.

When the Conservatory first opened, over 200,000 people visited in the first four weeks. Years later, the Phipps remained one of Pittsburgh’s “finest and most loved institutions” according to Mayor Peter Flaherty in the 1971 Pittsburgh Post-Gazette. By 1992, the Conservatory still attracted 165,000 people per year, and today, visitors flock to the Phipps for both architectural and historical reasons. It is also recognized by the Pittsburgh History and Landmarks Foundation and included on the National Register of Historic Places.

By 1930, the Conservatory was well-known and attracted worldly adventurers to its seasonal exhibits, and the director began hosting a myriad of events in the plant-filled rooms. Mrs. James D. Hailman, Chair of the Conservatory Committee in 1940, recounted to the Pittsburgh Press a socialite gala held during the Annual Spring Flower show: “Sandaled feet tiptoed through the tulips to the music of Bach at the preview which was conducted with the Hollywood touch of radio chats, fashionable audience, staff members in tuxedos, and a stringed orchestra adding to the atmosphere.”

Years later, in 1935, the Conservatory was renovated after neglect following Henry Phipps’ death in 1930. Additions to the Phipps Conservatory provided room for larger crowds and more plant species. The renovations allowed visitors to walk through the plant displays, added lighting for better accessibility to the exhibitions, and secured the old structure. After the renovations, the Conservatory began to charge 25¢ for admission for the first time.

Two years later, a 1937 windstorm damaged the plant houses, and the Conservatory was closed for two years for repairs. The original greenhouses were replaced with new ones that had the same integrity of their predecessors, but were about one-third larger. At this time, the Conservatory also incorporated their new “garden plan” into the exhibition’s design, which presented a central feature for each room.

The Conservatory continued to branch out in the following years, hosting more events to attract new visitors. These events were successful, as evident by the record one-day attendance of 16,000 set in 1942. A year later, the Conservatory celebrated its 50th anniversary with a public ceremony dedicated to its founder, Henry Phipps.

In the years leading up to the Conservatory’s 75th anniversary, minor changes were made to the structure and room layout, and the growing plant exhibitions continued to draw visitors. For the Diamond Anniversary, the South Conservatory featured a large floral diamond covered in white chrysanthemums.

In 1987, the Conservatory held its first annual plant sale, attracting 20,000 people to Schenley Park. Two years later, the Conservatory revolutionized the Pittsburgh community by offering plant tours to students from city grade schools. This was the first pilot program of its kind in the area and was run by Phipps Friends, a group of tour guides and volunteers at the Conservatory. Georgann McGaw, a third grade science teacher, told The Pittsburgh Post-Gazette the program was a “good way of taking resources that are right here in the Pittsburgh area and using them to bring science a little closer to home for the children.” Likewise, Paul Haber, principal of Liberty School, said, “The tours are just a real good idea… The reason I was particularly interested in going was because we didn’t have one inch of dirt behind our row house in Oakland. Everything was either cement or brick.”

A non-profit organization gained ownership of the Conservatory in 1993 after the city had operated the Conservatory at a deficit for years. Attendance dropped from 250,000 to just 25,000 visitors per year, and the city was close to losing the Conservatory completely. Mayor Masloff told The Pittsburgh Post-Gazette in 1993 “Few realize how close we came to losing Phipps. Now lovers of natural beauty will be its beneficiaries for many years to come.”

That same year, the Conservatory began to hold wine tastings and cooking demonstrations. The public event included a preview of the Conservatory’s fall show, “On the Way to Ahhhhs,” as well as a tasting of new and limited-release wines. Guests also entered the drawing for two round-trip tickets to Italy to further explore the botanical world and learn to cook with Italian chefs.

The Conservatory continued to be involved in the community with other events, such as the 1997 exhibit “Top 100 Houseplants.” The display showed plants that visitors could grow at home, but the tour guides also addressed the necessities – light, water, temperature, fertilizer, upkeep – to successfully starting a home garden. The Conservatory’s planting lessons were so popular that the local Community College of Allegheny County began offering classes such as “Houseplants R&R” and “Creating an Indoor Light Garden.”

Yet another renovation occurred in 1998 to clean up the premises. The Conservatory added parking, a café, a visitors’ center, and new greenhouses; its name was changed to Phipps Conservatory and Botanical Gardens at this time, as well. As a result of its renovations, Phipps began to draw larger crowds. People continually visit the Conservatory to experience the wonder and beauty contained within its 19 gardens. 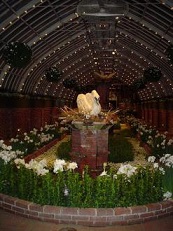 The Phipps Conservatory also features innovative sustainable design. Standard greenhouses consume a great amount of energy because the main enclosure is made entirely of glass, allowing heat to escape easily. However, Phipps Conservatory uses coal and gas boilers to allow steam to heat the interior. Steam enters the rooms to heat and humidify the space, and extra steam recirculates beneath the sidewalks outside to melt the snow in the winter.

The Phipps Conservatory also uses passive heating. During the day the system heats the interior, while thick masonry walls store the heat throughout the day. At night the heat turns off, and the walls slowly release thermal energy into the building, keeping the temperature optimal for the plants’ survival.

The Phipps’ most recent undertaking was its 24,350 square-foot research, education, and administrative complex called the Center for Sustainable Landscapes (CSL) completed in 2011. The Center was Phase III of Phipps Conservatory’s facility expansion project, which brought more sustainable building practices to the premises, and modernized the historic site. Phipps Executive Director Richard V. Piacentini says their hope is that the CSL will “inspire others to live more ecologically sensitive lives.”

The LEED Green Building Certification Program recognizes the best building strategies and practices. Based on the number of points that a building earns, it can achieve either a Certified, Silver, Gold or Platinum level of LEED Certification. Phipps Conservatory’s Center for Sustainable Landscapes earned 63 out of a possible 69 points, gaining LEED Platinum status in August 2013.

The Pittsburgh Post-Gazette calls this addition “the greenest of its kind” due to its success in meeting the world’s most demanding green building standards. The CSL exceeds the standards of U.S. Green Building Council’s Leadership in Energy and Environmental Design (LEED) Platinum, the Living Building Challenge, and the Sustainable SITES Initiative for landscape design, becoming the first building to simultaneously accomplish all three goals. In discussing the CSL’s sustainability, Aurora Sharrard, Director of Innovation for the Green Building Alliance, stated, “You’re trying to achieve three different systems at the same time, some of which have divergent goals, you’re working with a site that is heavily bounded by Schenley Park and has limited access, plus you’re weighing parking, energy, water, events.”

The Living Building Challenge, the world’s most rigorous performance standard, calls for the “creation of building projects… that operate as cleanly, beautifully and efficiently as nature’s architecture.” In order to meet the challenge, buildings must be net zero energy and net zero waste and water over their first 12 months of occupancy. The CSL is the largest building in the United States to have attempted the Living Building Challenge, and it has been designed to “function as efficiently as a flower.” 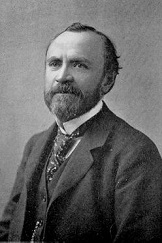 Once known simply for his generous donation to the city, Henry Phipps is now seen as a successful innovator. Phipps Conservatory and Botanical Gardens is not only a historic exhibition, but also an advanced complex that continues to strive toward sustainability. The Conservatory shares its vision with thousands of visitors each year. As James D. Van Trump Director of Research for the Pittsburgh History and Landmarks Foundation states, “to this day, Phipps Conservatory is a vital cultural and educational center for the city of Pittsburgh.”

The Center would like to thank The Phipps Conservatory for their assistance with this article.