The Sweet Success of Thrill Rides and Water Parks 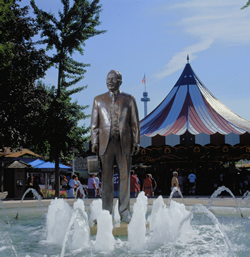 Hersheypark
Milton Hershey is a continuing presence at the amusement park he founded so many years ago.

Amusement parks today pride themselves on the intensity of their thrill rides, the speed of their roller coasters, and how high their Ferris wheel sits up in the sky. It wasn’t always this way, however. Milton Hershey, the founder of Hersheypark and the Hershey Chocolate Factory, started this well-known amusement park from nothing but a picnic area. Throughout the years, he turned it into one of the most famous and entertaining parks of all time. With the amount of work that went into the creation of the park, it is no surprise that the once small town of Hershey, Dauphin County, is now home to one of the largest, and most exciting, amusement parks in the country.

Amusement parks were not a very popular idea in the early 1900s. Few industrialists were taking the time to build parks since there was a much larger demand for houses and buildings. Milton Hershey had a vision, and therefore decided to build a park for his factory employees. He was a firm believer in a work/life balance and wanted somewhere for his employees to go after work and on the weekends to relax. He didn’t want Hershey, Pennsylvania, to turn into a boring factory town, and even though his Mennonite mother thought his idea was fruitless, he followed through with his plan. 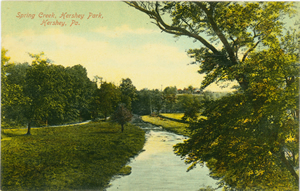 Courtesy of the Hershey Community Archives, Hershey, PA
This 1908 postcard shows the area of Spring Creek that would become the site of Hershey's amusement park.

In 1903, Milton Hershey bought 150 acres of land located north of the town of Hershey and the Hershey Chocolate Factory. The park began as a very modest picnic area and was not expected to blossom into the scene as it is known for today. Hersheypark featured flower gardens, newly planted trees and shrubs, and a long sweeping lawn. A year later, a large pavilion was built for entertainment purposes, and even before the park officially opened, community bands would perform there during the summer months. Milton Hershey was so excited about the idea of the park that he even bought uniforms and instruments to encourage his workers to perform. It was not long before he built a bandstand to seat the patrons of his shows. Generators from the Hershey Chocolate Factories were used to light the park, turning it into a great place to spend a summer evening.

This small town community park changed drastically when the Philadelphia and Reading Railroad built a stop directly across the street from the main entrance of the park. As the park continued to develop, the railroad offered various stops to this Hershey location from many of the larger surrounding cities (including: Harrisburg, Lebanon, and Lancaster). The Hershey train stop became the destination for hundreds of people every weekend who were anxious to enjoy a day out in the park. The railroad was not the only form of transportation to get to the more and more popular park; for only five cents, guests could take the trolley, which ran special deals on the weekends, encouraging people to spend the day at Hersheypark. Company executives at the Chocolate Factory persuaded the railroads to hand out colored postcards of the park to everyone who came on the train to spread awareness of the place and attract more guests. Hersheypark soon became the one of the community’s largest businesses. Over 10,000 visitors came over the weekends for the busy summer. The entertainment that the park provided was an additionally great attraction for the guests. 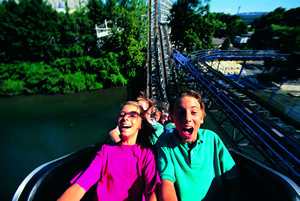 Hersheypark
Though the rides have changed, the enjoyment of children at the amusement park does not.

In 1908, Milton Hershey bought his first official ride—the carrousel. A year later, with the help of the Lancaster Iron Works, a miniature railway was added to transport guests from the main entrance of the park to the carrousel. Soon after the railway was built, a new attraction came to Hersheypark—the Hershey Zoo. Milton Hershey got this idea when he built a pen for a group of prairie dogs on the park grounds. He then acquired three native deer, which led to native possums, squirrels, birds, etc. Hershey brought in a black bear shortly after, which they began to train in order to provide further entertainment to the guests. One of the bears, Mag, ironically, died after eating too many Hershey Kisses that zoo visitors had been left behind. The Hershey Zoo was the largest free private zoo in the country. By 1916, the zoo had so many new animals that it was just like any other zoo in the country, an enormous accolade for the park.

The park’s business and expansion slowed down during World War I, causing shorter park operating hours and fewer trains and trolleys leading to the location. Because of the war effort, money was tight for a lot of American families. After many cutbacks, the park remained open and continued to host movies and performers in the pavilion, as well as ballroom dancing.

When the Great Depression hit, many amusement parks around the country were in big trouble. Their attendance had fallen so dramatically that they could not afford to keep the park running anymore. With the help of money from the chocolate factory, Milton Hershey was not only able to keep Hersheypark up and running, but he even managed to add new rides and arenas throughout the ‘30s. The sports arena that he built was an engineering marvel. This state-of-the-art facility seated 7,000 people for sporting events and over 10,000 people for concerts. The size of the arena wasn’t the chief factor that made it stand out, but the design and method of construction was what separated it from all others of its time. Austrian designer, Anton Tedesko, pioneered the idea of making dome shaped buildings out of thin concrete. This was the first thin concrete dome of its size in all of North America, and it was found right in the heart of Hersheypark. 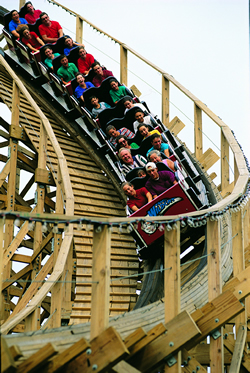 Hersheypark
Speed, thrills, and tradition are there for every rider on the wooden coaster, Wildcat.

Although Hersheypark was not greatly affected by the Great Depression, the park began, however, to lose many guests during World War II. Although trains and trolleys still brought in a number of people, the gas rationing slowed down attendance dramatically. Both the Hershey Zoo and the ballroom closed in 1942 as a result. Four years later, the end of the war was finally celebrated with the unveiling of a new roller coaster, the Comet.

In 1971, Hersheypark began a campaign that transformed the regional attraction into one of America’s most popular and exciting theme parks. A new amphitheater was constructed that attracted the talents of acts such as The Challengers, Hudson Brothers, and Sammy Kaye. The popular Canyon River Rapids was introduced in 1987, as well as many other water-themed rides throughout the ‘80s.

By the 1990s, Hersheypark had expanded its grounds to over 100 acres. In 1996, the park celebrated its 90th year anniversary, and to commemorate the event, unveiled a new wooden roller coaster called the Wildcat, which was named after the “Wild Cat” coaster that Milton Hershey introduced to the park on its 20th anniversary, in 1923. To end the century, Hersheypark hosted “The Fair That Lasts All Summer Long,” during the summer of 1999. A 10,000 sq. ft. exhibition tent showcased agricultural and educational themes, as well as many carnival foods and games.

The Lightning Racer was built at the turn of the millennium, which was the first wooden racing/dueling rollercoaster ever to be built in the United States. This modern marvel was constructed out of Southern Yellow Pine wood and featured two identical roller coasters dueling side-by-side. Some roller coasters have trains that race next to each other on parallel tracks, explained Hersheypark spokeswoman Kathy Burrows, and some have "dueling" trains that look like they are going to crash into each other. Fans have their choice of either riding Thunder (green) or Lightning (Red), and the overall experience is a race to the finish line. 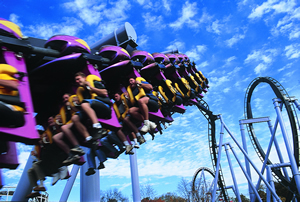 Hersheypark
Twists and turns and speed unimagined at the foundation of the park can now be found on rides like the SooperDooperLooper.

Today, Hersheypark is one of the largest and most famous theme parks in the country. It features over 60 rides, world-class performs, numerous games, a water park, and parades. Kathy Burrows says, in her 19 years of working at Hersheypark, she has seen Hershey grow dramatically. In Kathy’s opinion, Hershey is different from many other modern amusement parks because it is a privately held company. Hershey is based upon the fundamental beliefs of Milton Hershey himself, and he just wanted to make people happy and relaxed in their spare time. It is not run by a large national corporation like many other large chains. Because it is a privately owned company, she believes Hershey can give more satisfaction to its customers because it can make all the decisions on its own without having to negotiate with a national branch. She also mentioned that Hershey has more roller coasters than any other park in the country. According to Ms. Burrows, “Roller coasters intrigue people whether or not they ride them because of the whole living on the edge mentality.”

Hershey is also known for its boardwalk, a feature many other amusement parks do not have. This boardwalk symbolizes many of the guests’ childhoods of spending time on beaches and boardwalks in the Northeast where many of the adult guests vacationed as kids. Hershey is a great place for people to reminisce about their childhood and to be able to bring their kids along to create new memories.

There is a reason Hersheypark has been ranked the #1 amusement park in the Northeast by Family Fun Magazine; it has become a “must see” place for everyone of all ages. Its numerous thrill rides, children's rides, boardwalk, water park, and entertainment shows make it an ideal getaway for the whole family. Considering the park is lined with cocoa-scented mulch, it may very well be the sweetest place on Earth.

The Center wishes to thank Kathy Burrows of Hersheypark and Tammy Hamilton of the Hershey Community Archives for their asssistance illustrating this article.