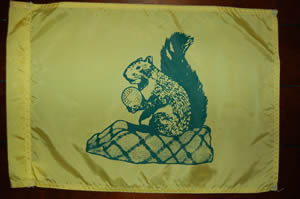 GreenJacketAuctions.com
Flags like this one have waved over Oakmont's challenging course since 1903.

A shot poorly played is a shot irrevocably lost." This brash yet sensible counsel is a testament to Henry C. Fownes' philosophy on golf, a philosophy personified in the unforgiving design of Oakmont Country Club. Consistently ranked as one of the premier courses in the world, Oakmont has witnessed some of the most defining moments in USGA history, from Nicklaus's remarkable defeat of Palmer in the '62 Open, to Johnny Miller's record setting final round 63 in the '73 Open, which has been hailed "the greatest round of the 20th century."

The origins of the course date back to 1903 when Henry C. Fownes, after being bought out by steel magnate Andrew Carnegie, purchased over 200 acres of farmland in the "White Oak Areas" of Oakmont, Allegheny County. Envisioning a course that paralleled the "link" style, Fownes opted for a layout reminiscent of the Scottish courses that he visited during his travels. The course, which took two years to construct, became a popular getaway for some of Pittsburgh's wealthiest industrialists, including Henry C. Frick. At its inception, visitors to the course often arrived by train at the Hulton Station, on Allegheny River Boulevard, and were transported to the entrance of the course by means of horse drawn carriages. 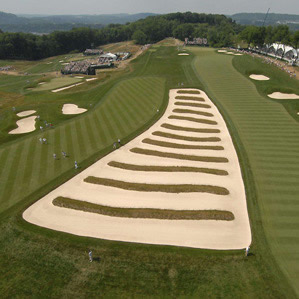 Fred Vuich/SI, golf.com
Oakmont's Church Pews are surely one of the most unusual bunker hazards on the PGA Tour.

Originally, the course boasted over 300 bunkers, eight par-5's, and one par 6, evidence of Fownes brutal attitude to punish those golfers that refused to adhere to the straight and narrow. It is noted that Fownes would often accompany various teams of golfers during their round, and if at any point a shot landed safely in the rough, Fownes would have that area replaced with a hazard by day's end. When people speak of a golf course, most do not perceive it as consecrated ground, but those who have ever had the privilege of playing No.3 at Oakmont, almost feel compelled to kneel and pray. Home to the infamous "Church Pews," this heavyweight bunker is an intimidating force that has judged and often purified the abilities of some of the game's greatest golfers. Currently laying over one hundred yards in length, and measuring almost fifty yards at its widest point, one begins to imagine how even the best golfers manage to circumvent this cathedral of sand.

Despite the beach's ubiquitous presence, the truly defining hazards of Oakmont Country Club are the greens. A columnist from the Pittsburgh Post Gazette has said, "They are, quite simply, the most famous greens in the world. Faster than a Bullet train. Smoother than a porcelain tub. More tilt than a three-legged table." Even 7 time major championship winner Sam Snead commented that he once tried to mark his ball on one of Oakmont's greens, but the coin slid off. Treacherous undulations and perennial poa annua grass provide the foundation for the glass like surfaces. John F Zimmers, Jr., Oakmont's Ground Superintendent, mentioned that the poa annua strain, "It is so rare that several universities have attempted to breed this grass but have not been successful to date," a detail that only adds to the mystical legacy of the course. 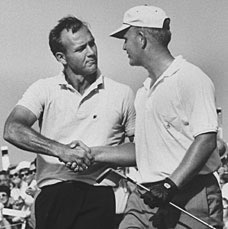 GreenJacketAuctions.com
Oakmont's 1962 U.S. Open brought a changing of the guard from Arnold Palmer to Jack Nicklaus.

George E. Fowkes, a long time member at Oakmont, was one of the very fortunate few to witness not only the '62 and '73 Opens but also the metamorphosis of the club throughout its rich history. Mr. Fowkes, also a lifelong resident of Oakmont, recalled the atmosphere of the 1962 Open. Fowkes stated that due to his local roots in Latrobe, and respectable accomplishments in the game, Arnold Palmer was heavily favored to win the 1962 Open at Oakmont. Fowkes described how throughout the competition, hordes of fans would follow Palmer's party, each seeking a glimpse of the most talented and admired golfer on tour. Nicklaus, a recent graduate of Ohio State, was a winless rookie when he entered the '62 Open competition. Nicklaus was paired with Palmer for the opening two rounds, and managed an impressive 72, 70 despite the chattering gauntlet of Arnie's Army. As John Garrity, a contributing writer for Sports Illustrated, described, "Oh, did we mention where the '62 Open was played? It was at Oakmont Country Club in Western Pennsylvania, a mere 40 miles from Palmer's home in Latrobe. The spectators? They were Pittsburgh people. They loved Arnie and they hated Jack." Nicklaus and Palmer both finished with a combined four day total of 283, resulting in a Sunday playoff. Paralleling the triumphs of Franics Ouimet's 1913 U.S. Open victory over Harry Vardon, Nicklaus managed to pull off one of the greatest upsets in history, defeating Arnold Palmer with a final round 71 to clench his first of eighteen major championships, which today still holds as the USGA record. 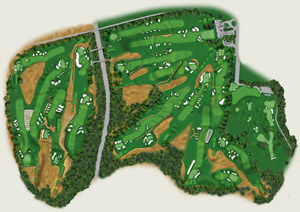 History would once again be made at Oakmont eleven years later when twenty three year old Johnny Miller shot an unprecedented USGA record 63 to claim the 1973 U.S. Open. Mr. Fowkes summarized Miller's round as if it was "just like throwing darts." Rain had managed to saturate the impenetrable greens, creating a "softer" landing for a golfers approach, and providing an opportunity for Miller to capitalize on his strong iron play. Whereas most approach shots into Oakmont's greens needed to be played ten to fifteen yards short to account for the slope and roll, the rain allowed a player to target the pin directly, and that's exactly what Miller did, completing an astonishing eighteen greens in regulation. Miller's immaculate round, which some believe was supplemented by divine intervention, featured three birdie putts over ten feet, and a twenty five foot birdie putt on No. 3. Jack Nicklaus commented on Miller's play by saying, "They've had all kinds of rumors of what happened at the golf course, that the sprinklers got stuck on or whatever it was...But I don't care if the sprinklers were stuck on or the holes were six inches wide, that's a heck of a round of golf." Additionally Mr. Fowkes went on to say that most of the gallery was completely oblivious to Miller's run at history, for most of the crowd was once again following Palmer and Nicklaus who each placed tied for fourth alongside Lee Trevino.

Fownes creation also underwent various transformations throughout its history. In the sixties there was initiative by club members to beautify the course by installing nearly 3,500 trees. However, in the nineties a new proposal was submitted to return the course to Fownes original design. A clandestine operation was undertaken by the greens keeper in which over five thousand trees were removed including those apart of the beautification project. The removal's secrecy was eventually discovered to the dismay of many of Oakmont's members, yet accepted for its honest intentions to return the course to the original layout. More recently, the clubhouse underwent a thorough rehabilitation, returning many of the dining and trophy rooms to their unique craftsmanship. The course is now nearly treeless except for a few oaks that create a peaceful grove near N0. 9 green, and for a single oak between No.4 and No. 5 fairways that stands as a monument to a different version from the link style course that plays today.

Oakmont recently hosted the 2007 U.S. Open, won by Argentinean Angel Cabrera. The club plans to host the 2010 U.S. Women's Open and was selected to host the U.S. Open once again in 2016.