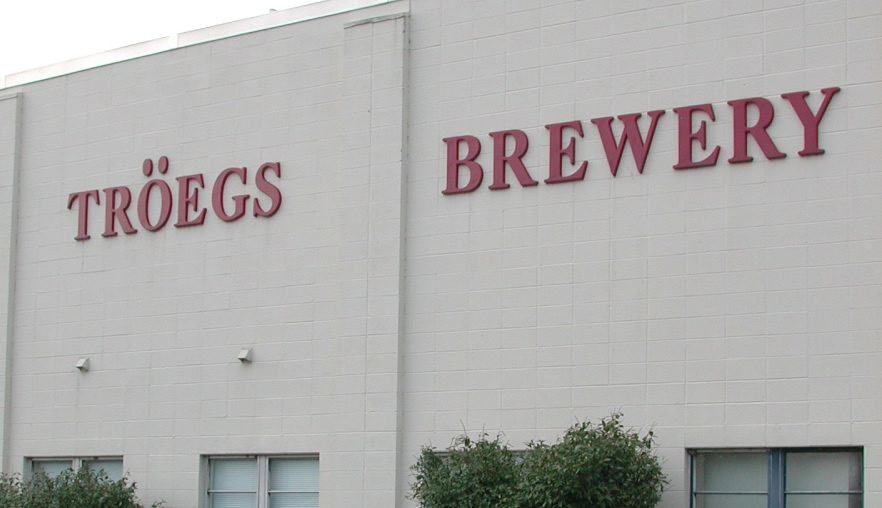 Tröegs Brewing Company was founded in 1997. At the ages of 22 and 24, Chris and John Trogner, brothers from Mechanicsburg, had a dream of brewing their own beer to satisfy not only their own taste buds but also the palates of others through sale of their unique recipes to wholesalers for distribution. While working in Philadelphia and frequenting the local bars, John became interested in brewing beer. At the same time, Chris was enthralled by the many craft breweries in Colorado. Instead of chalking it up to a pipe dream, the Trogner brothers wanted to turn their idea into a reality. They wanted to blend English and American brewing techniques to create a unique flavor. John moved to Boulder and began taking brewing classes and working at Oasis Brewing Company while Chris studied English brewing techniques at the University of Sunderland. John was to be the head brewer while Chris would handle the management side of the business. They decided to name their brewery “Tröegs,” a combination of their childhood nickname, “Trogs,” and the Dutch word for “pub,” kroeg. The Trogner brothers’ vision was finally on the path to fruition. However, given microbreweries failure rate of one in six, their road to success would surely not be clear of potholes and road bumps.

With $800,000 of funding from private investors, the Trogner brothers ordered the bottle assembly line first. Although they did not have a building yet for the brewery, they remained optimistic and knew they would find one. “We know we took a very high risk (ordering the line before they signed a lease on a building), but we know that’s going to happen,” John told the Central Penn Business Journal in 1996. With problems arising because of zoning laws and size constraints, they waited patiently for the right opportunity to lease a building. In 1997, the Trogner brothers settled in Harrisburg with their brewery set to have a tasting room and a quality control lab. They planned to brew 20 barrels of beer six times a week, with a first-year projection of 3,000 barrels according to a 1997 article in the Central Penn Business Journal. Fortunately, the community of microbreweries in Pennsylvania welcomed the new addition. The Central Penn Business Journal quoted Wade Keech, owner of Whitetail Brewing Inc. in York in 1997, “At this point there are few small breweries in this area, and we’re working together. We’re trying to get people to drink local and fresh beer.” 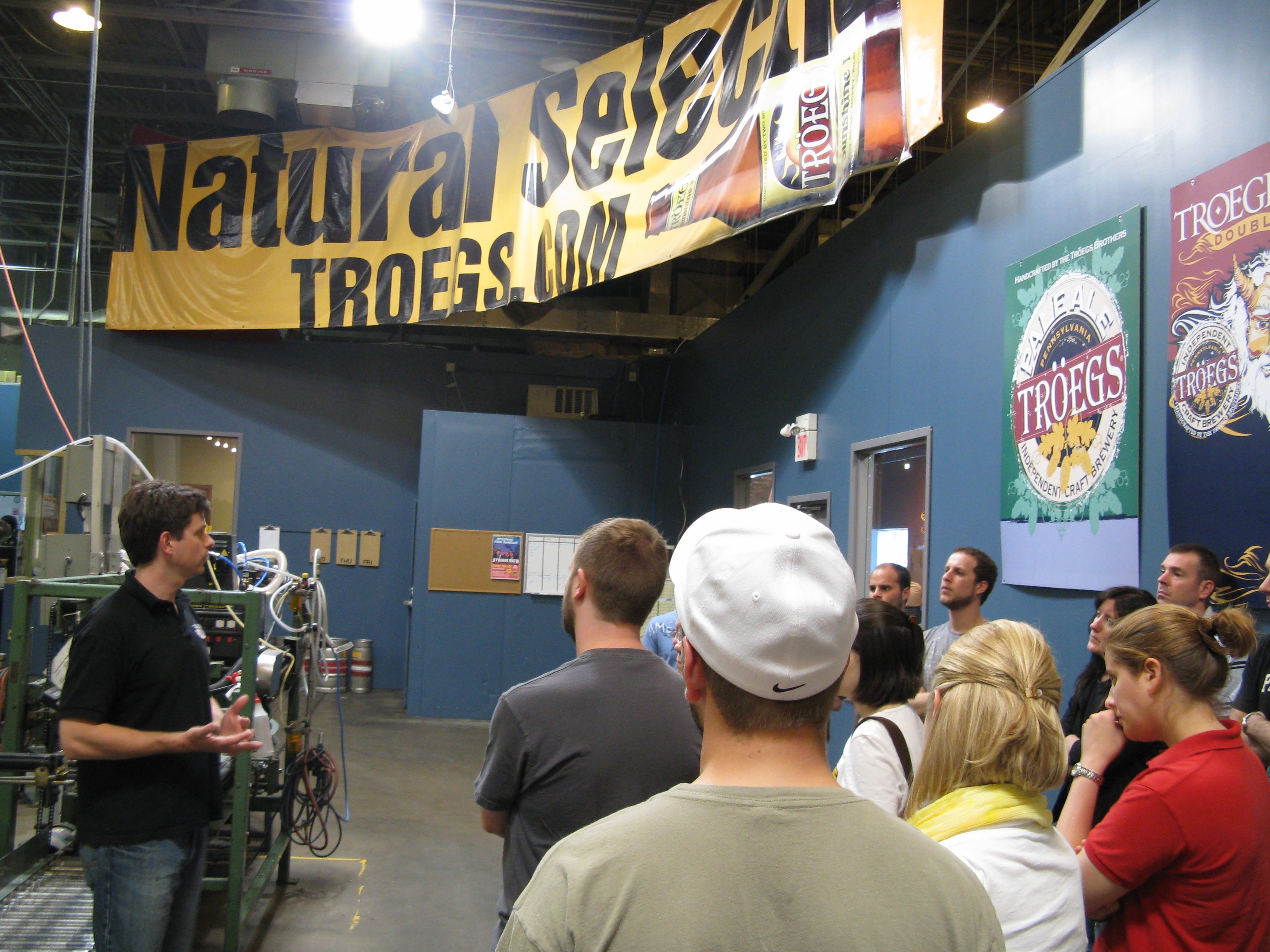 One year after their establishment, the Trogner brothers were still learning exactly what went into producing, marketing, and distributing their product. A 1998 Central Penn Business Journal article stated that during the year, Tröegs’ availability went from tap-only to tap and bottles, from three fermenters to five, and from two styles of beer to four. In addition, the brothers were having a hard time getting the word out about Tröegs. “Without a mass-marketing budget, you can’t go out and do big advertising,” stated John in the article. As a marketing tool, the brothers were doing three to four tastings a week in restaurants and distributors. Additionally, tours of the brewery were being offered on Saturday afternoons to the general public.

So, what makes Tröegs Brewing Company so unique? For starters, the Trogner brothers want to ensure the freshness of their beer by only distributing it to states that are within a close driving distance of the Harrisburg brewery. Aside from Pennsylvania, Tröegs’ beer is distributed to New Jersey, New York, Washington, D.C., Maryland, Delaware, Ohio, Massachusetts and Virginia. As of right now, there are no plans to increase distribution to all 50 states and Troegs is staying close to its roots in Central Pennsylvania. While many microbreweries increase their products by adding a pub to the mix, the Trogner brothers are adamant about leaving the food to someone else, “We don’t want to expand our area just to get more volume. We want to build solid customers. And we won’t build a pub. No pub!” Chris was quoted saying in Pennsylvania Breweries. 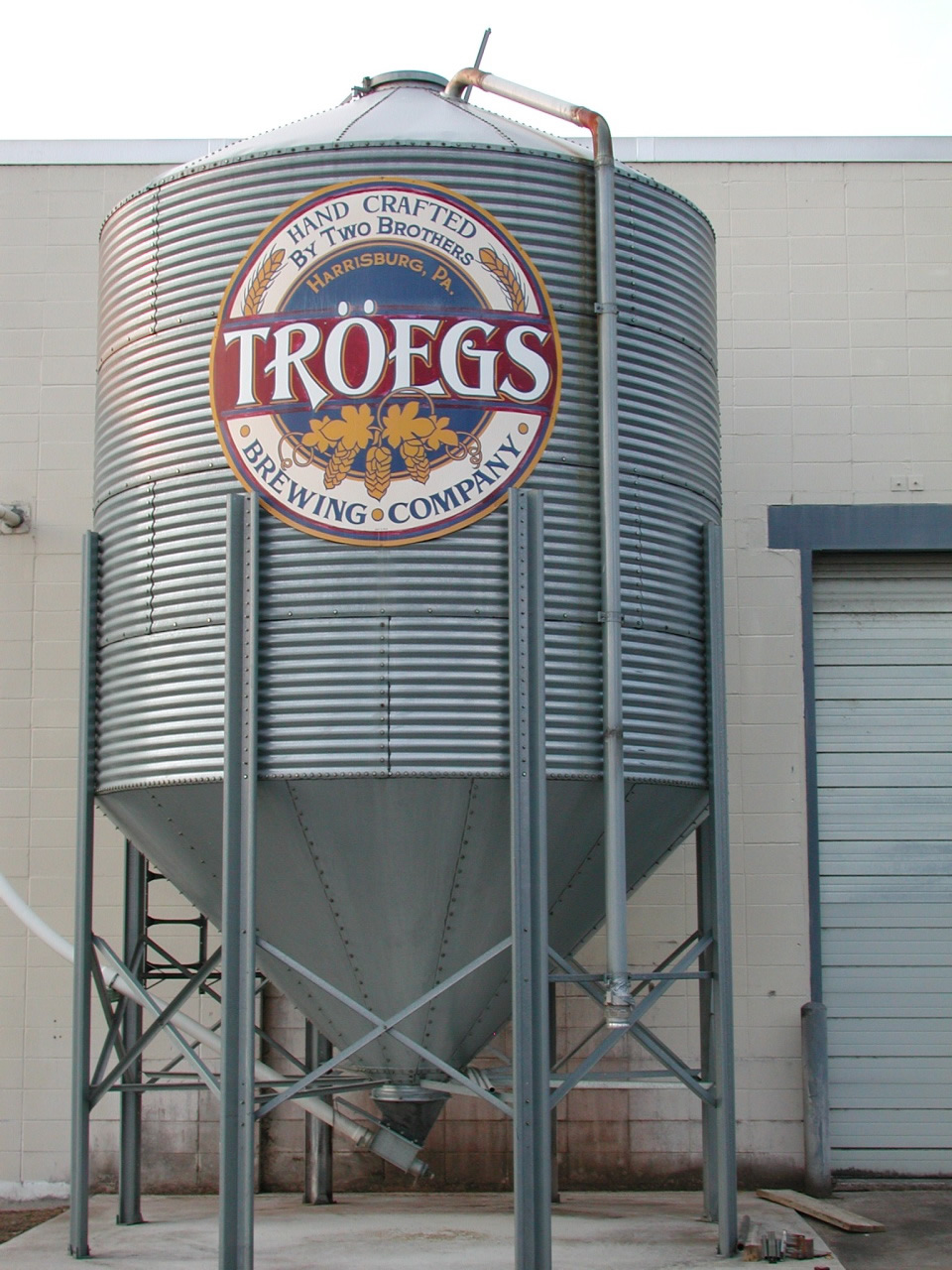 Cliff1066 / Flickr.com
A view of a grain silo outside the Tröegs Brewery displays their tagline, “Hand Crafted By Two Brothers.”

Ed Matthews, the head chef at One Block West, a restaurant in Winchester, Virginia, loves the HopBack Amble Ale and features a few other brews in his restaurant. Matthews had the opportunity to interview Chris Trogner and ask him the burning questions many Tröegs fans are curious about: Why did the brothers decide to found their brewery in Pennsylvania instead of Colorado? Chris replied that Colorado was a “mature beer market with dozens of great breweries within a short driving distance. Pennsylvania wasn’t quite there so we thought it would be easier to bring back what learned in Colorado to Harrisburg and start our own small brewery.”

Matthews continued his interview by asking what the difference was between the home brewing that he had done and the real brewing that the Trogners do. Chris answered by naming a few factors that the home brewer wouldn’t necessarily think about: brewing consistency, airs, wort production (the sugar solution derived from grain) and yeast growth. He added that he and John are continually taking courses to increase the efficiency of the brewery and the quality of their beer. Matthews laid the groundwork for a comparison to the Samuel Adams Brewery of Boston’s small roots, saying that it is now “contract brewed and still a mass-market product, but the soul is gone.” Chris replied, “We’ll always produce our beers in house so we can monitor our own quality. We can’t put that trust on an older and, in some cases, outdated regional brewery. Our long-term goal has always been to brew our own beer and keep distribution close to our brewery.”

Matthews also asks about what Tröegs’ process is, from toying with a new beer to consistently brewing it. Chris answered, “We’re always talking about new beers or how to improve existing ones. Our ‘single batch’ beers are really test batches of beer. We run 40 kegs through a few beer bars and ask for feedback on the beer and the name/logos. They usually start while we’re enjoying a few beers in our tasting room. We want to continue turning out 2-3 new and interesting beers each year (draft only). If something sticks we’ll consider adding it in bottles.” 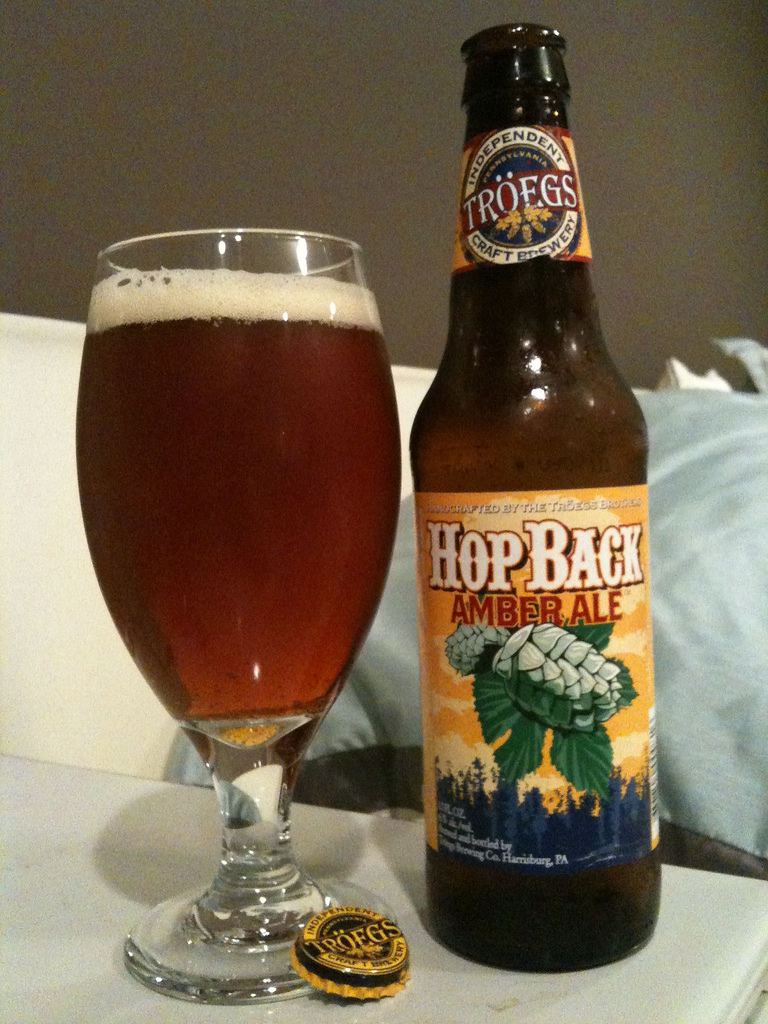 craftbeer / Flickr.com
Tröegs HopBack Amber Ale is the favorite of the Trogner Brothers.

Anyone who has ever seen a Tröegs label must wonder where the ideas for the colorful and attractive labels come from. An example is the Mad Elf Ale label, which features an elf with crossed eyes and large ears, clutching a goblet, and carrying three plump, red cherries over his shoulder. When asked if Tröegs contracts an agency to create the labels, Chris stated that they try to do everything in house and really enjoy brainstorming on the brewing and packaging side of the business and they also have a friend help construct the images on a computer.

With the tagline “Hand crafted by two brothers,” it’s safe to say that Tröegs will continue to be a rather small operation featuring robust flavors and intricate blends. The restricted distribution of the beer just adds to the feeling that Tröegs is a microbrewery designed for the beer connoisseur who genuinely wants to savor and enjoy the brew. If you want the beer, it won’t go to you; you just might have to go to it. The Trogner brothers are committed to continuing to expand their horizons and creating different brews. Chris’ statement in the Central Penn Business Journal in 1998 says a lot about their passion, “Every bar that I go to, I constantly have to watch to see what people are drinking. It’s great to see bartenders pulling our handle. Or you overhear people recommend our beer, or have someone recommend it to you. That’s very rewarding”. While this may be the first time you have heard of Tröegs Brewing Company, it is likely not the last.