UNIVAC: From Punch Cards to PCs 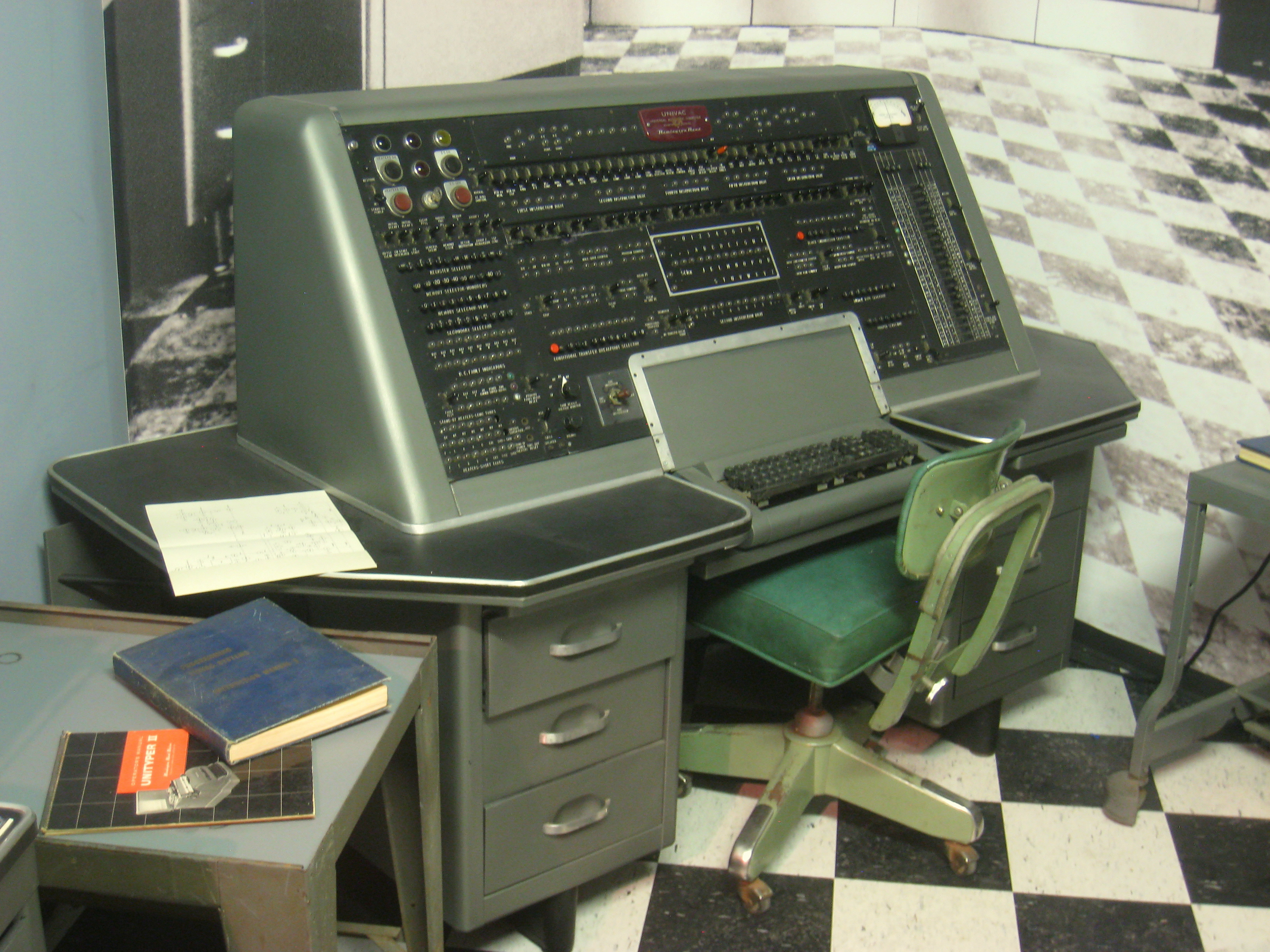 Daderot
This console was used to operate UNIVAC, the first civilian computer.

In the 1950s it would have been ridiculous to think that one day we could fit an entire computer in a backpack, let alone a device like an iPod in our pockets. In 1951, the first commercial computer was released, the UNIVAC. The modern computer is a technological marvel and is the product of over six decades of progress. Computational development started with gigantic, room-filling machines; this progress began with the Univac Division of Remington Rand Inc., based in Philadelphia.

The UNIVersal Automatic Computer (UNIVAC) was a second generation machine, begun after J. Presper Eckert and John Mauchly developed another early computer, the ENIAC (Electrical Numerical Integrator And Calculator) five years prior. Goldstine remarks, however, that the ENIAC was intended exclusively for military use. Once the benefits of an automatic machine were witnessed, it is no surprise that the commercial sector became interested in how the computer could be useful in their area. The United States Census Bureau, for example, wanted a computer to perform simple arithmetic functions on large pools of numbers.

Development for the UNIVAC began in 1946, when the Census Bureau invested $300,000 just for research, which is over three million dollars today when adjusted for inflation. Paul Ceruzzi, in his biography of Mauchly, said that Eckert and Mauchly were originally employed at the University of Pennsylvania but left in 1947 because of a disagreement with the institution about who actually owned the ENIAC’s data and ideas. They went on to form a company in Philadelphia called Eckert-Mauchly Computer Corporation.

During these few years as the Eckert-Mauchly Corporation, development was slower than expected on the UNIVAC. In 1950, Remington Rand acquired Eckert and Mauchly’s smaller company and gave them the financial help needed to complete the UNIVAC I. The three years as their own business was not fruitless, as their company invented the world’s first compiler for the programming language Short Code. Programmers rejoice at the prospects of compiled code because the foundations of most programs used by the world today are created using these methods. 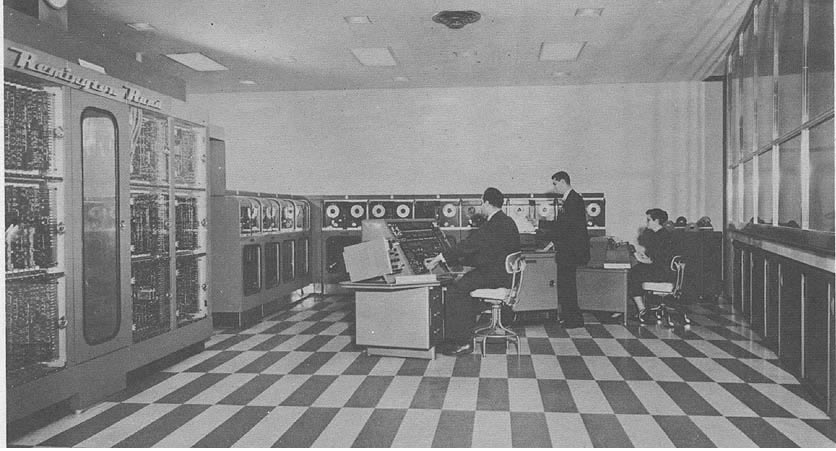 U.S. Department of the Army Ballistic Research Report
UNIVAC took up a huge room to perform its computations.

C.J. Huston worked in Pittsburgh for Remington Rand after World War II. He became the computer manager for the region until 1963, when he left the company. Although Mauchly had written Short Code a few years earlier, Remington Rand had developed the FLOW-MATIC programming language by the late 1950s. Huston often coded for some of the major clients of Remington Rand in Pittsburgh, U.S. Steel being one of them. U.S. Steel’s UNIVAC was busy most of each day running production programs so the only time Huston could test his work was in twenty-minute slots between 2 A.M and 6 A.M. Every time they had a bug in their programs they had to wait until 9 A.M. to call the FLOW-MATIC group in Philadelphia and as Huston says, “Hope they would get a call back with a fix.”

Coding for the UNIVAC could be a headache when trying to stay up-to-date with current practices. Since Remington Rand centralized its technical support to New York City, Huston and his colleagues had to travel to New York or Philadelphia to receive formal training. Huston said that, “All too often, customer’s employees returned with new information which was unknown to me.” While this was a roadblock for UNIVAC programmers, not everything about this computer was negative.

The UNIVAC leapt ahead of many other companies who were using punched cards for programming during these years. Punched cards are stiff, paper cards which resemble modern-day bubble tests. A programmer would punch individual holes in a card to write his/her program, and that is how programs were stored: on paper. The UNIVAC took a different approach and used magnetic tape for input. Magnetic tape is simply magnetic strips of plastic which can hold audio, video, or data; this is what VHS or cassette tapes use as their storage medium. 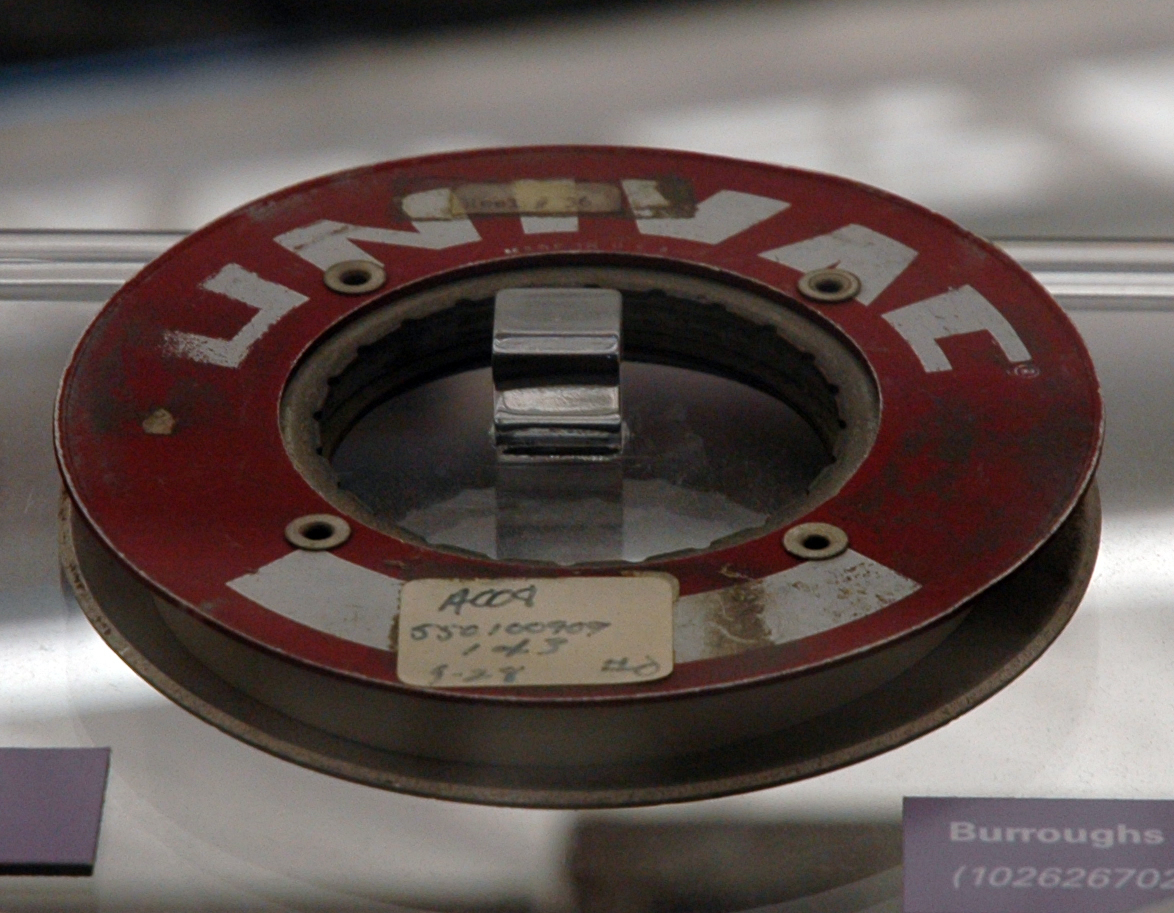 Marshall Astor
Spools of magnetic tape were used to store data for the UNIVAC.

In 1951, Eckert and Mauchly were the first to use magnetic tape for data storage. This stunted its original sales because most companies could not make use of this computer until a card-to-tape reader was released. It wasn’t until 1960 that the Univac Division developed a paper tape which could be punched like cards but read at 8800 characters per minute, according to the Chicago Daily Tribune; paper punched cards could only be read at a rate of 3600 characters per minute.

Even though it led to many strides forward in technology, the UNIVAC really did not take the spotlight until the 1952 election between Dwight D. Eisenhower and Adlai E. Stevenson. The machine took a 1% poll of the population and correctly predicted Eisenhower would win. According to CNN, Walter Cronkite had downplayed the importance of the computer, saying, “I don’t think that we felt the computer would become predominant in our coverage [of the election] in any way.” As it happened, the UNIVAC was within one percent of the electoral vote turnout, and was only off of the popular vote for Eisenhower by about 30,000 (out of over 33 million). At this time, the UNIVAC became a household name and was synonymous with “computer.”

UNIVAC took another leap in 1959 when it was fed ten years of traffic tickets numbering over two million. It copied only 150 tickets per minute, which is cripplingly slow in modern terms. Even so, this machine still got a great amount of publicity from being able to do the work of many people in a short span of time. Moreover, the UNIVAC proved that we could digitize information; computers today use this theory as a basis for both hard drives and memory.

Ed Thelen
A Mercury chamber served the UNIVAC as a memory device.

UNIVAC, however, encoded its data in a unique medium: mercury. The Science News Letter tells us that by continuously refreshing data in a cylinder of mercury that information could last for a long time. In this way programs were fed via electrical pulses into mercury which then propagated as waves slowly travelling through the liquid. Upon reaching the other end of the mercury cylinder, they were read and converted into electric pulses to begin the cycle anew. Mercury Delay Lines were one of the first types of non-paper storage for information.

In 1957, the UNIVAC continued its legacy of prediction at the Chicago City Fair. Job-seekers attending the fair could fill out an application which Univac employees would program onto a card. They would then feed this to the UNIVAC which would query its list of open jobs in Chicago and spit out a result in less than a second. The Chicago Daily Tribune reported that without human error the UNIVAC always found a job fitting the applicant, or it would lament, “Univac is sorry it has no job for you.”

Due to the sales of UNIVAC to the U.S. Defense Department and General Electric, IBM joined the computer business around 1951. Originally, IBM manufactured only accounting machines but with the success of Remington Rand’s Univac Division the corporation turned itself to the commercial computing giant. Most people know what IBM is, but why don’t we all have UNIVAC computers? 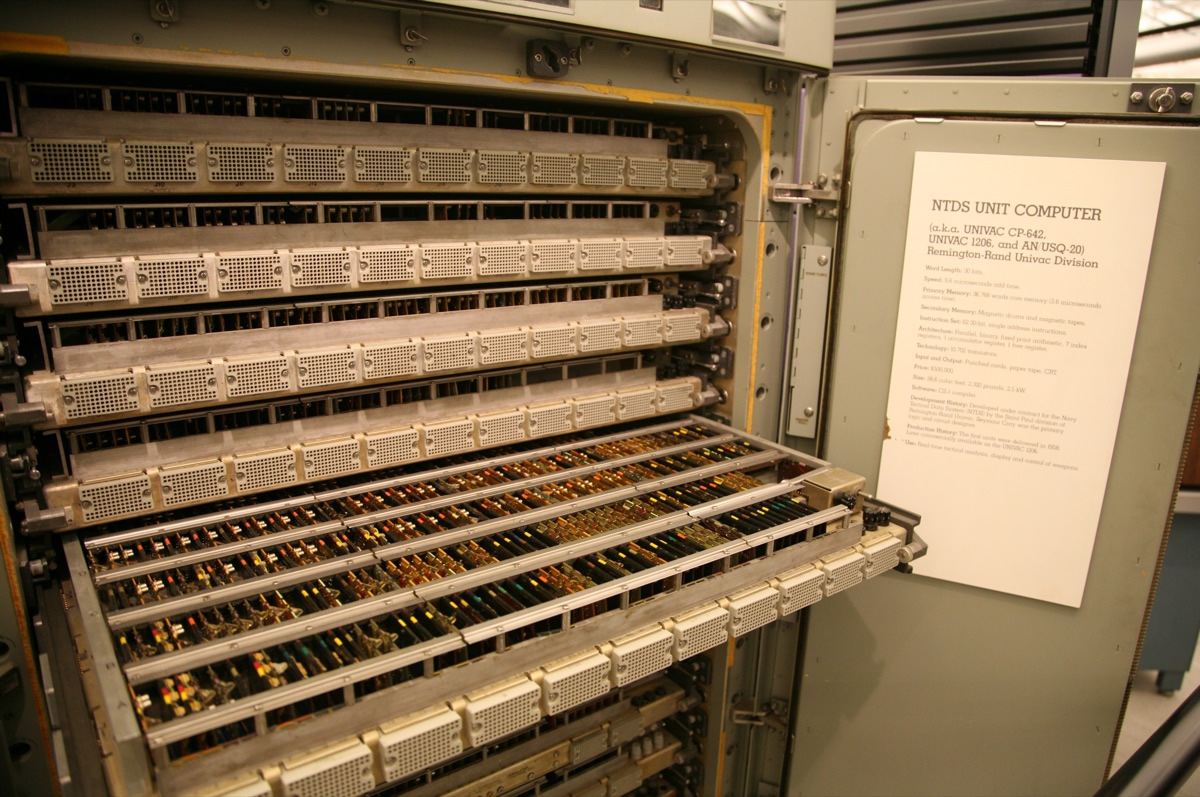 Scott Beale
All of this circuitry enabled UNIVAC to make what were astounding computations in its time.

This computer, for all of its charm, still experienced its downfall. The Chicago Tribune tells us that by 1963 many stockholders were irate with the Univac Division’s monetary gain. Remington Rand became Sperry Rand in 1955 when Sperry Corporation bought them, and so it now fell to Sperry to deal with this situation as well. The paper reported that the Univac Division had never operated with a profit, and in fact lost $28 million in 1963; this is over $198 million in 2010. It was not economically feasible to continue producing machines that did not benefit the company.

The legacy of UNIVAC persists to this day as the little-known father of modern computers. The UNIVAC was a room-filling machine and was not very fast by today’s standards, but it showed a lot of what computers could do for people. The effects of the hardware created for its use set the stage for the eventual concept of smaller machines. Computers may have started with punched cards, but now many homes have their own personal computer.