Actress Jeanette MacDonald was born on June 18, 1903, in West Philadelphia, Pennsylvania. She attended schools to enhance her natural skills in singing and acting. She got her first big break in New York City where she caught the attention of her sister's producer. This led to make many successful musical movies, most notably with Nelson Eddy. She died on January 14, 1965, in Houston, Texas.

Jeanette MacDonald was born on June 18, 1903, in West Philadelphia, Pennsylvania to Daniel, a contractor, and Anne May MacDonald. There was a lot of controversy about the actual year she was born because she was an actress. One source claims that her baptismal certificate says 1903 and is used as the most accurate source. She was the youngest of three daughters, and the others were named Elsie and Blossom. MacDonald's parents were very supportive of the entertainment industry. They sent all three of their daughters to performing schools to help enhance their natural talents. Jeanette MacDonald made her first public appearance at age five and a half when she sang at the Philadelphia Academy of Music's charity opera. This appearance landed three more solo parts and started off her singing career. At age eleven, she became a Sunny Songbird and toured Pennsylvania and New Jersey with Al White. She then moved on to the Seven Merry Youngsters with Elwood Wolf. The Seven Merry Youngsters were more advanced than the Sunny Songbirds and sang at bigger shows in more prominent cities.

Later on, Jeanette MacDonald attended West Philadelphia High School. One day her and her father went for a trip to visit her sister in New York City. Her sister, Blossom, was part of the Capitol Theatre and, during their visit, Jeanette MacDonald caught the attention of the producer, Ned Wayburn. Wayburn placed MacDonald in the chorus of "The Demi-Tasse Revue," her New York debut. After her father's business declined, he decided it would be a good idea to move the family to New York City. She left her old high school and transferred to Julia Richman High School in Manhattan. In April 1921, MacDonald landed a small role in the movie "The Night Boat." This small role led her to a small time modeling career where she modeled furs and lingerie. All of these small part time roles led to her first important role in "A Fantastic Fricassee" at the Greenwich Village Theatre. This role put her on the road to stardom.

Jeanette MacDonald had a trainer to help increase her operatic skills. During the casting search for The Love Parade, she caught the attention of famed director Ernst Lubitsch. Lubitsch described MacDonald as eager and hardworking as well as beautiful and talented. Her partner in this film was Maurice Chevalier. This pair became a flirtatious couple on screen and starred in a couple of movies together. During these movies, Jeanette MacDonald would easily take her clothes off for the camera and was called "The Lingerie Queen of the Talkies." In 1930, during the movie Monte Carlo, also directed by Lubitsch, Jeanette MacDonald sang "Beyond the Blue Horizon" by Richard Whiting during a car scene. This scene has become very famous because of its use of imagery and the fusion of sound.

In 1931, the tabloids in Europe spread a rumor that Jeanette MacDonald had an affair with the Prince of Italy and was viciously murdered by his wife. These rumors caused theaters to boycott MacDonald's films. To prove she was still alive and that these accusations were false, she decided to go on tour in Europe. This tour was so successful that she repeated another tour from 1932 to 1933. In 1934, MacDonald signed a contract with MGM studios. At this time she was engaged to her manager Robert Ritchie. After this tour she received an offer from studio chief, Louis B. Mayer. Mayer is the one that is responsible for the incredible pairing up of MacDonald with Nelson Eddy in 1935. The pair became known as "America's Singing Sweethearts." She also appeared in movies with actors such as Clark Gable and Allan Jones, but the MacDonald-Eddy duo stuck.

In 1937, a lot happened in MacDonald's life. Besides coming out with her first starring vehicle, The Firefly, she married Gene Raymond and was named "The Greatest Singing-Actress" since Mary Garden. She met Gene Raymond at Rozika Dolly's beach home right after the break up with Robert Ritchie. In 1937, MacDonald was also voted "Queen of the Screen" in a poll by Los Angeles Times. In 1939, she became Hollywood's highest paid actress. In 1943, MacDonald appeared in Gounod's opera Romeo et Juliette. In 1944, Gounod helped her with her American opera debut with the Chicago Opera Company in the opera Faust.

In 1949, MacDonald appeared in her 27th and last film, The Sun Comes Up. After this movie she claimed to be retired, but became very busy again during the 1950's. She appeared in recitals at Carnegie Hall as well as performing at a concert at Constitution Hall. She also started to perform at Night Clubs, and in 1957, she performed at the Sahara in Las Vegas.

Jeanette MacDonald's last public appearance was in 1957 at Louis B. Mayer's funeral; she sang "Ah, Sweet Mystery of Life." After traveling with her husband she settled down in Southern California. In 1963, her heart murmur became serious, and she was admitted into the Methodist Hospital in Houston, Texas. There, she received an arterial transplant that helped until 1964, which is when she was operated on for adhesions at UCLA Medical Center. In January, she traveled back to Houston for a heart transplant. Jeanette MacDonald died in Houston, Texas, on January 14, 1965.

Jeanette MacDonald is commemorated on Hollywood's Walk of Fame with a star at 6157 Hollywood Boulevard.

Known for her film duets with Nelson Eddy, movie star Jeanette MacDonald was from West Philadelphia. 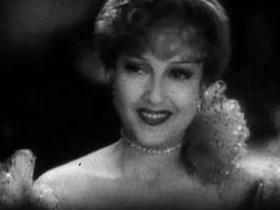