Scholar Charles Grosvenor Osgood was born in Wellsboro in 1871. After earning degrees at Yale, he spent his professional career at Princeton, teaching English. He specialized in the works of Edmund Spenser in particular and the study of poetry in general. Though retiring in 1937, he continued his scholarly output as a professor emeritus. Osgood died in 1964.

Charles Grosvenor Osgood was born in Wellsboro, Pennsylvania on May 4, 1871, the son of Mary Josephine and Charles Grosvenor Osgood. He was educated at Yale University, earning his B.A. there in 1894 and his Ph.D. in 1899. He continued teaching at Yale until 1905 when Woodrow Wilson, then president of Princeton University, called him to New Jersey to serve as one of the university's original preceptors. Osgood would remain at Princeton for the rest of his professional life. On January 29, 1910, Osgood married Isabella Sheldon Owen; the couple would have one daughter, Jean Elizabeth.

As a preceptor at Princeton, Osgood was an early proponent of what would come to be called "interdisciplinary study." His signature course was "English Literature and the Classics," a course that "cut across boundaries established by the departments of classics and English." He would continue advocating a broader base of knowledge for scholars throughout his life. In his 1951 Princeton Phi Beta Kappa address, he said "We need teachers who, however learned and expert, transcend their specialty with a constant sense of its final value in human terms..." He also held "fireside preceptorials," discussions with small classes at his own home. He firmly believed that, as Frederick Osborne recorded for the New York Times, "Good teaching is not the imparting of facts but the development of powers" in university settings.

While actively teaching, also published works on Milton, The Pearl, Samuel Johnson, Vergil, and Boccaccio. He also began a years-long term of service as general editor of the works of Edmund Spenser, publishing the first volume in 1932. His highly acclaimed The Voice of England, a history of literature in England, appeared in 1935. Richard Le Gallienne wrote in the New York Times that "In its combination of companionable authority with the magnetism of generously nurtured talk, the talk of a love who is a scholar too, it is a permanent addition to the most valuable as well as fascinating kind of literary criticism."

Osgood retired from active teaching in 1937, holding the Holmes Professorship of Belles Lettres, the oldest endowed chair at the university; but certainly did not retire from his scholarly work. In 1941, Osgood published Poetry as a Means of Grace. In the preface to this validation of poetry and the liberal arts, he wrote:

For a genuine sense of literature I would insist upon a man's passionate interests in the human individual, on his passionate concern in the spiritual life of men, in the issue between failure and success, between perdition and salvation... Such is the indispensable basis of a full, true and responsive sense of values in literature: For literature is life, with the same scale of values, the same ineluctable laws, the same unerring and beautiful justice.

In 1960, Princeton University set up four graduate fellowships named in honor of Osgood to further the educations of the four most promising graduate students in their second year of study. At that time, Osgood had been retired from the faculty for 23 years. A year before his death the University of Washington Press collected eleven of his essays, published as The Creed of a Humanist. Professor Willard Thorp of Princeton called this work that championed the inherent usefulness of studying the liberal arts "a crowning achievement of a great scholar's life."

Osgood was an extremely popular professor at Yale. He wrote extensively on Edmund Spenser, his favorite poet, and edited the Variorum Edition of his works. 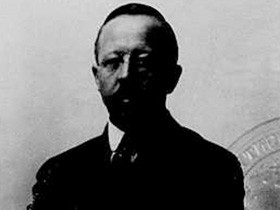