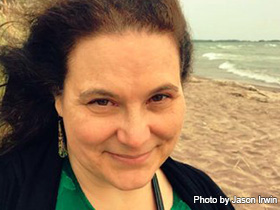 Jen Ashburn earned her MFA in Poetry and Creative Nonfiction from Chatham University in Pittsburgh. Her poem "Our Mother Drove Barefoot," from her first full-length poetry book: A Light on the Wall (2016), was selected for publication by the Public Poetry Project of the Pennsylvania Center for the Book in 2018. At the time of this writing, Ashburn teaches, writes, and works as a tech analyst in Pittsburgh.

"I started off writing almost exclusively personal poetry," Jen Ashburn tells those attending the 2018 Public Poetry Project event, held in Foster Auditorium of the Penn State University Libraries in April of that year. Ashburn's poem "Our Mother Drove Barefoot," from A Light on the Wall, was selected for publication by the Public Poetry Project of the Pennsylvania Center for the Book.

"My mother suffered from schizophrenia. And I tried really hard to avoid writing about it, but half my book is about my mother. So it happens."

In his Pittsburgh City Paper review, Fred Shaw describes the sections of A Light on the Wall dealing with family as the hardest hitting. Haunting poems dealing with a schizophrenic mother balanced by poems focused on a more grounded father figure make this collection both "revealing and compassionate," he says.

Other poems in this collection reflect on Ashburn's four years living in Japan and traveling through Asia. Kristofer Collins of Pittsburgh Magazine refers to the work as containing "all of the psychological dynamism of a great novel in its examination of a woman's life, from her small-town Indiana upbringing to her exploration of a much larger world far outside the circumscribed boundaries presented to her as a child."

Ashburn grew up in southern Indiana. She earned her MFA in Poetry and Creative Nonfiction from Chatham University, and at the time of this writing is a writer, teacher, and tech analyst living in the Edgewood borough of Pittsburgh.

Her teaching efforts include serving as a Student Coordinator and teacher for Words Without Walls (WWW), a program that provides creative writing classes taught by Chatham University students to men and women in the Allegheny County Jail, State Correctional Institution of Pittsburgh, and the drug and alcohol treatment center Sojourner House.

"Words Without Walls offers creative writing instruction to those who might not otherwise have an opportunity to participate in such classes," its website states. "[A]nd gives MFA students the opportunity to become engaged in the Pittsburgh community in new and meaningful ways, while practicing the skill of teaching."

She has also taught creative writing at the Allegheny County Jail (ACJ) and facilitated workshops for VoiceCATCH, a community writing program for those released from jail.

Jen Ashburn's work has also appeared in several publications, such as Grey Sparrow, Pretty Owl Poetry, Puff Puff Prose & Poetry Vol. II, and the anthologies Make Mine Words and Unconditional Surrender. As of this writing, she continues to writes poetry and nonfiction.