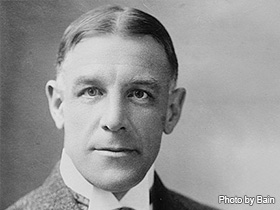 Born in Den Helder, Netherlands, on October 9, 1863, Edward William Bok was an American editor and Pulitzer Prize winning author. After moving to the United States, Bok wrote for a number of magazines including the Brooklyn Eagle, Scribner's Magazine, and Brooklyn Magazine. After 30 years as editor for Ladies' Home Journal in Philadelphia, he wrote his autobiography, The Americanization of Edward Bok: The Autobiography of a Dutch Boy Fifty Years After, which won a Pulitzer Prize in 1920. Bok died in 1930 in his estate in Lake Wales, Florida.

Edward William Bok was born on October 9, 1863, in Den Helder, Netherlands. He was the second son of William Jan Hidde Bok, a Dutch diplomat, and Sieke Gertrude van Herwerden. He married Mary Louise Curtis on October 22, 1896, in Jenkintown, Pennsylvania, and the couple had two children.

Since Bok's father was a wellknown local politician, Bok and his family lived a luxurious life with four servants. However, due to financial problems, the family was forced to immigrate to the United States after living in the Netherlands for six years. They moved to Brooklyn, New York, where Bok and his brother William learned English at public school. The family was later granted American citizenship in 1876. At 10 years old, Bok started working at a bakery in Brooklyn and other various jobs, such as working as a paper boy and writing about children's parties for the Brooklyn Eagle. At 13, Bok quit school and went to work as an office boy at the Western Union Telegraph Company where he learned valuable life and business lessons that he carried with him.

In 1882, Bok juggled school and work by taking night classes and working as a stenographer for the publishing house, Henry Holt and Company. Two years later, he moved to Scribner's Magazine, taking a position as advertising manager. Bok, who was president of a literary society called the Philomathean Society, contributed articles to the Philomathean Review, and he also published and edited Brooklyn Magazine, which was later sold to start the Bok Syndicate Press in 1886. The Bok Syndicate Press was the country's third syndicate with 137 newspapers subscribed. Its weekly letter on women's topics, written by journalist Ella Wheeler Wilcox, grew to an entire women's page, and a letter syndicated by Bok called "Literary Leaves" ran in 45 newspapers.

At the end of the 1880s, Cyrus H.K. Curtis of the Curtis Publishing Company offered Bok an editor position of the women's magazine, Ladies' Home Journal in Philadelphia. To increase the magazine's readership, Bok divided the magazine into sections of fiction, fashion, nonfiction, and editorials. Bok also thought to have literary talent and major figures of the day write for the magazine. In 1902, he persuaded Helen Keller to have her autobiography, The Story of My Life, appear in the magazine. The magazine influenced public opinions about issues such as public sex education and the battle against patent medicines. Because these issues were published, the magazine lost 25,000 of its readers. With the help of the magazine, Bok was able to pass the Food and Drug Act and launched sex education, which were considered to be important issues in the early 1900s. Also, Bok was the first magazine editor to have advertisements and text on the same page.

In addition to his column, "At Home with the Editor" in Ladies' Home Journal, he wrote a number of popular books while he was editor. In 1919, Bok resigned from his position at Ladies' Home Journal and started his autobiography, The Americanization of Edward Bok: The Autobiography of a Dutch Boy Fifty Years After (1920), which was about Bok's emergence from poverty and his rise to power in the magazine industry. His autobiography won the Gold Medal of the Academy of Political and Social Science and the Joseph Pulitzer Prize for best autobiography in 1920.

According to H.L. West in his Bookman review, "Mr. Bok has done more that merely carry the reader with him along the pleasant paths which he has trod. He has thought deeply upon the problem of the immigrant and the result is a valuable contribution." The North American Review's critic considered The Americanization of Edward Bok to be a significant book, comparing it to Xenophon's Anabasis. The comparison between the two "is not far-fetched; the Greek common sense wasn't so far from modern American common sense as some have imagined, and men of superlative sense and lucid mind are rare enough in any age to justify a parallel."

Bok also established a number of awards including the $100,000 American Peace Award in 1923. Half of the amount of the award was given for the "best practicable" plan for U.S. cooperation in world peace and the other half was awarded if the plan was enacted. Bok later founded The Philadelphia Commission, which was dedicated to the beautification of the city. He also established the Woodrow Wilson Professorship of Literature of Princeton University and "The Woodrow Wilson Chair" at Williams College with endowments.

In 1930, Bok died from a heart attack at Mountain Lake Park, his estate near Lake Wales, Florida. At the estate is a bird sanctuary that features a Singing Tower with a carillon of bells, and Bok is buried at the base.