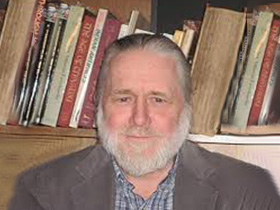 Science fiction writer and editor John F. Carr was born in 1944 in Germantown, Pennsylvania. After moving to California, he became a writer while studying at San Diego State University. He was an editor of science fiction anthologies with Jerry Pournelle & Associates from 1977 to 1996. Carr has written several sequels to H. Beam Piper's Lord Kalvan of Otherwhen and a biography of Piper. Carr founded Pequod Press in 1981 and, at the time of this writing, lives in Boalsburg, Pennsylvania.

Writer John F. Carr was born on Christmas Day in the Germantown section of Philadelphia, Pennsylvania, in 1944. He is the son of John and Marguerite Carr. Carr's father had been a tool and die maker for General Dynamics during the Atlas Rocket program. His grandfather had worked in Thomas Edison's laboratory. That same grandfather was also a good storyteller. Carr's other grandfather used to regale him with tales of having been Al Capone's chauffeur. Carr says he was also a voracious reader, particularly of fairy tales in his youth. Such an upbringing prepared him well for a career in writing science fiction.

Carr spent much of his early life doing odd jobs and reading. In 1965, he went to San Diego State University (SDSU) to, as he put it, actually "do something." He graduated in 1972 with a BA in history and psychology, along with teaching credentials. While at SDSU, he started his first novel, Labyrinth of Gomorrah, which is unpublished. Following his graduation from college, he worked at an assortment of jobs and continued writing novels. He published Ophidian Conspiracy in 1975 and Pain Gain in 1976.

From 1977 to 1996, Carr was an editor with Jerry Pournelle & Associates, Inc. Pournelle was a fixture in the science fiction world for decades, though his most significant contribution conceptually was the Strategic Defense Initiative (commonly referred to by the public as "Star Wars") in the early 1980s. Carr says his time with Pournelle was "incredibly stimulating...like being in a think tank." While with Jerry Pournelle, Carr edited numerous anthologies of science fiction stories. He referred to his time there as "the best gig you could ever have."

While at Jerry Pournelle & Associates, Carr became heavily involved in what later became the focus of his professional life: the works of Pennsylvania science fiction writer H. Beam Piper. On his own, Carr had been collecting the long out-of-print Piper stories. In the late 1970s, Ace Books contacted Jerry Pournelle to get copies of those stories. Carr agreed to provide them on the condition that he be allowed to edit the story collections that Ace intended to publish. They agreed, setting Carr on the road to becoming "the Piper expert." This arrangement led to Carr editing and writing introductions for four story collections of Piper's work: Empire, Federation, Paratime!, and The Worlds of H. Beam Piper.

In the early 1980s, writer Roland Green had been after Jerry Pournelle to write a sequel to Piper's last novel, Lord Kalvan of Otherwhen (1965). Instead, Pournelle introduced Green to Carr in 1984 with the aim of having them collaborate on a sequel. After two weeks spent plotting out the book, Carr and Green set to work. Carr says Green had "Piper's Voice" while he worked on the creation of subsidiary characters. In 1985, the two published Great Kings' War to excellent reviews. The pair would have continued writing sequels together, but Green's ill health prevented it. In 2006, Carr published a revised edition of Great Kings' War (1985).

Also in the 1980s, Carr set up his own publishing firm, Pequod Press, because of his difficulties with the publishing industry. Carr says the industry "is a field that eats its own." He also acknowledges that his association with Jerry Pournelle did not help him with editors who had found Pournelle's abrasive personality off-putting. On the more idealistic side, he says that Pequod Press allows him to concentrate on "making books, not making money." Nonetheless, in his quest to "connect to an audience" he has become "about the only US author to have set up an imprint that's profitable." Via Pequod, Carr has published two more sequels to Lord Kalvan of Otherwhen: Kalvan Kingmaker (2001) and Siege of Tarr-Hostigos (2004).

In the mid 1990s, Jerry Pournelle drifted away from science fiction. This necessitated a change in jobs for Carr. He started Sticky Fingers magazine, a publication devoted to the Rolling Stones. The magazine lasted for six issues and helped Carr make numerous connections. He eventually went into banking. In 1998, he was hospitalized with an aortic aneurysm. He acknowledges that "I never expected to be my age today." Carr continued both writing and working in banking until he retired and decided to move from California.

At the time of this writing, John F. Carr and his wife, Victoria, have lived on the outskirts of Boalsburg, Pennsylvania, since 2005. Carr says that the more relaxed environment of Central Pennsylvania enhances his writing and his life, exclaiming that Boalsburg is "like a Disneyland."