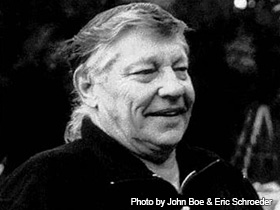 A young adult (YA) novelist and writer of nonfiction for educators, William Coles taught at the University of Pittsburgh.

Born on January 30, 1932, William E. Coles taught English at various universities before settling at the University of Pittsburgh. He authored several textbooks about writing and three novels for young adults. Coles died on March 21, 2005.

William E. Coles, Jr. was born on January 30, 1932, in Summit, New Jersey. He earned his BA from Lehigh Valley University in 1953, his MA from the University of Connecticut in 1955, and his Ph.D. at the University of Minnesota in 1967. He married Janet Kafka, and together they had two children—Rebecca Drake and Jennifer Ann.

With his strong interest in engineering, Coles assisted students interested in both the sciences and humanities while teaching composition. He served as an assistant professor of English at Amherst College in Amherst, Massachusetts (1960-1965), Case Western Reserve University in Cleveland, Ohio (1965-1970), an associate professor at Drexel University in Philadelphia (1970-1974), and finally as a professor and director of composition at the University of Pittsburgh (1974-1998). Also, while at the University of Pittsburgh, Coles held a joint appointment in the School of Education and taught in the Honors College. After retirement, he continued lecturing, conducting writing workshops, and authoring books for adolescents.

Coles was a member of the National Council of Teachers of English, Phi Beta Kappa, Lambda Alpha, and the University of Pittsburgh's English department. He told the University Times that "I wouldn't have written my own young-adult novels any differently if they had been for a general adult readership," noting how J.D. Salinger's Catcher in the Rye has since expanded its influence outside of a young audience.

Coles wrote a number of composition textbooks. Composing: Writing as a Self-Creating Process (1974) asks that students explore their own education and phrase-making, realize certain forces that block coherent understanding and expression, and judge the validity of one's knowledge. William M. Keith claims Composing is "both the most coherently controlled and the most intensely suggestive composition text that I know of, attacking directly and ingeniously the problem of clich??d theme-writing." However, Keith says that some assignments devoted to refuting students' writing styles and preconceptions could be off-putting. The Plural I: The Teaching of Writing (1978) addresses contradictions between the writer and the teacher of writing, in creating multiple personae of expression depending on the audience. David M. Higgins remains critical of Coles' "unflagging insistence that the students forge their own concepts, their own procedures, their own styles," and concludes that simpler exercise demonstrations would have sped things up a bit. On the other hand, Higgins also writes that the book is "instructional and exceptionally useful...Coles is an intense and highly distinctive teacher-stylist himself."

In addition to these various textbooks on writing composition study, Coles authored three novels for young adults. Funnybone (1992) won a citation on the Publishers Weekly Pick of the Lists. In this story, college student Walt's sister, Christine, attempts to understand why her brother dropped out of school and ran away, and she soon discovers his problems of drug addiction and becomes more introspective herself. Kirkus Reviews explains that, "This thoughtful look at addiction takes has a didactic air near the end—but there's plenty of information here, plus a thematic blend that includes some contrasting responses to Walt's sudden personality change, the particular family dynamics that contribute to the events, and Christine's maturing as a result of her own experiences."

Another Kind of Monday (1996) won an American Library Association Best Book for Young Adults award. A boy, Mark, travels home to Pittsburgh after discovering $300 and a note in his library copy of Great Expectations. He overcomes many social obstacles in order to locate the mysterious benefactor, but he learns that the great lesson to be learned lies in the undertaking of a journey itself. Karen Stabiner of the Los Angeles Times finds Coles "writes for young adults, not down to them, and addresses everything from contemporary drug problems to broken homes without climbing on a soapbox." Susan Rogers of School Library Journal critiques that "readers may be disappointed after plowing through large doses of local history social issues, and family problems, to find that the mysterious benefactor and his motivation are still unknown. Many of the minor characters are promising but undeveloped, and some are one-dimensional...an excess of unexplained plot twists and lengthy descriptions."

In Compass in the Blood (2001), a University of Pittsburgh freshman named Dee investigates the true story of Kate Stoffel, the wife of an Allegheny County Jail warden who, in 1902, aided in the escape of two convict brothers (Ed and Jack Biddle). Coles develops the story by making Stoffel into a more complex, Gatsby-like, enigmatic figure of mystery. The main character, Dee, mirrors Coles' own journey in researching the Stoffel story. Coles never finished his promised sequel, which would have answered many lingering questions. Diane Rowback of Publishers Weekly notes that, "Coles provides copious-but never tedious-historical details that drape his story in authenticity. Dee and her friends make a likable detective team, even though they sometimes arrive at conclusions too conveniently. Their playful, honest exchanges keep the proceedings on track. A subplot about Dee's mother feels tacked on, but does not detract from the book's main thrust." Vicki Reutter of School Library Journal says the story "ends with no new information. In a note, the author expresses his desire to remain respectful to Kate's family, and in doing so he may have forfeited the elements of a good story."

Coles passed away on March 21, 2005. His English department chair, David Bartholomae, tells the University Times that Coles "was one of the most brilliant and influential teachers of writing of his generation, and his work remains as a regular point of reference in the professional literature...Bill was extremely influential nationally in the design of the undergraduate writing program and, in particular, for the attention he gave to reading and valuing student writing, which was more often ignored than anything else...It was his vision and energy that made Pitt's composition program nationally significant and we continue to be guided by his spirit and his wisdom." His wife Janet Kafka added, "Bill had an artist's combination of passionate brilliance, fierce devotion and childlike wonder; that this energy was astonishing and he never went at anything with less than a 100 percent of what he had to give; and that he had little patience for those in the profession, or elsewhere, who seemed content to ask far less of themselves."