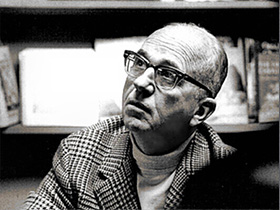 Michener, a world-renowned author and traveler, won a Pulitzer Prize in 1948 forTales of the South Pacific (1947).

James A. Michener was born in New York in 1907, and he was adopted into the Michener family, who resided in Doylestown, early in life. He received his early education in Pennsylvania and taught in private schools in the Commonwealth. His writing career began in 1948 with the successful and highly-esteemed Tales of the South Pacific (1947). He followed that success with dozens of lengthy, multi-generational novels, such as Hawaii (1959), Poland (1983), and Texas (1985). He died in Austin, Texas, in 1997.

Michener won a scholarship to Swarthmore College, where he majored in English and history and graduated in 1929. After graduation, he taught at The Hill School in Pennsylvania. Michener traveled abroad from 1931 to 1932, studying abroad at St. Andrews University in Scotland. Upon his return, he taught at The George School in Pennsylvania. In 1936, Michener decided to continue his education at Colorado State College of Education (now the University of Northern Colorado). He graduated with his master's degree in 1937 and then taught at the college until 1941. Michener then moved to New York, where he was an associate editor at Macmillan Co. from 1941 to 1942 and from 1946 to 1949. He continued to write for Macmillan Co. as a freelance writer from 1949 until his death.

Michener, a Democrat, was also very involved in politics. He was a member of the U.S. State Department Advisory Committee on the Arts in 1957, he was chairman of President Kennedy's Food for Peace Program in 1961, and he was a congressional candidate from Pennsylvania's Eighth District in 1962. Michener was also secretary of the Pennsylvania Constitutional Convention from 1967 to 1968. He sat on the U.S. Information Agency Advisory Committee from 1970 to 1976, the Committee to Reorganize U.S. IS in 1976, the U.S. Postal Service Advisory Committee from 1978 to 1987, the National Aeronautics and Space Administration Advisory Council from 1979 to 1983, and the U.S. International Broadcasting Board from 1983 to 1989.

Michener's first published work was the Tales of South Pacific (1947), which was based on his experiences during World War II. He won the Pulitzer Prize in 1948 for his book, which was turned into a long-running Broadway play by the musical masters Oscar Hammerstein II and Richard Rogers. Michener published two more novels. It was not until he penned Hawaii(1959) (which was the first of the multi-generational historical novels he became known for) that Michener became a bestselling author. Michener went on to publish more than 40 more works.

In addition to the Pulitzer Prize Michener won in 1948, he was also recognized by the National Association of Independent Schools in 1954 and 1958. He won the Einstein Award in 1967 and the Bestsellers Paperback of the Year Award for The Source(1965) in 1968. In 1970, Michener won the George Washington Award from the Hungarian Studies Foundation. In 1977, he was awarded the Presidential Medal of Freedom, the nation's highest civilian award. He won the Franklin Award for distinguished service from the Printing Industries of Metropolitan New York in 1980, and the President's Committee on the Arts and Humanities cited him in 1983. Also, Michener was recognized for his long-standing support of the Iowa Workshop Writer's Project at the University of Iowa. He won a Lippincott Travelling fellowship from the British Museum and a Distinguished Service Medal from NASA. In 1988, he was awarded the Golden Badge of Order of Merit. In Michener's honor, Random House Publishing has created an award for the best first novel written by an author over 40-years-old.